Accessibility links
Daniel Schorr: Lessons Learned And Shared The longtime journalist chats with his son as part of StoryCorps' National Day of Listening project. NDOL encourages people to sit down with a loved one the day after Thanksgiving and record a meaningful conversation. 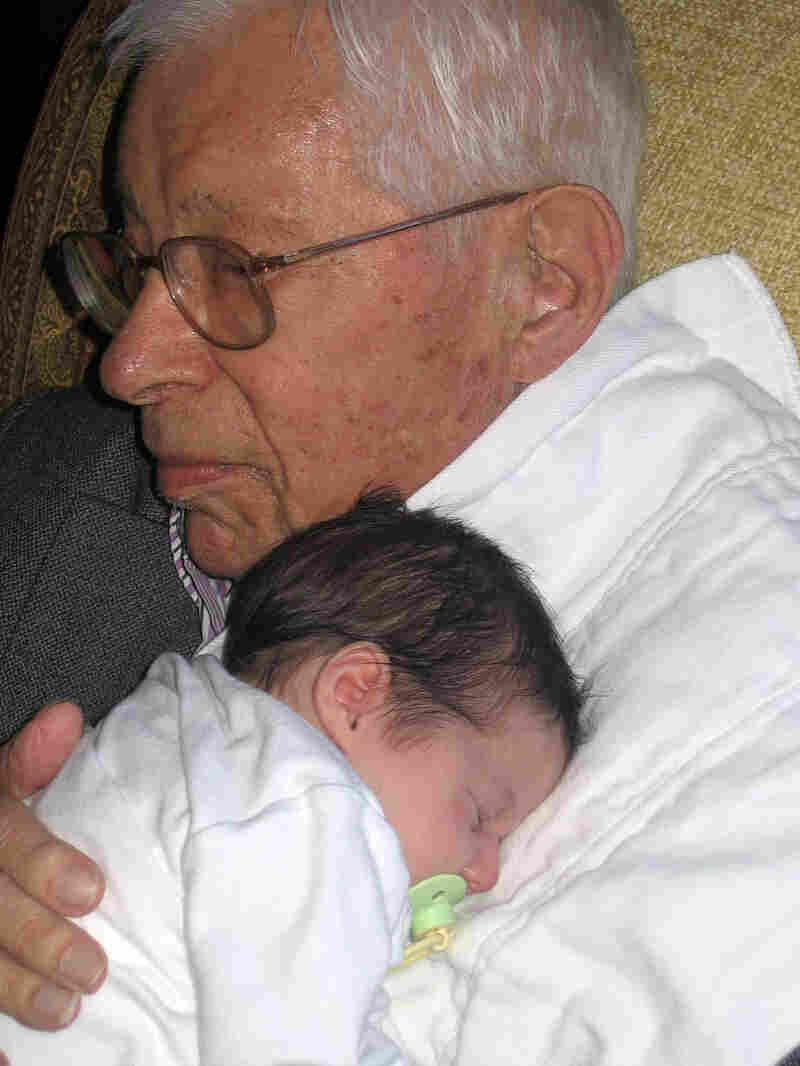 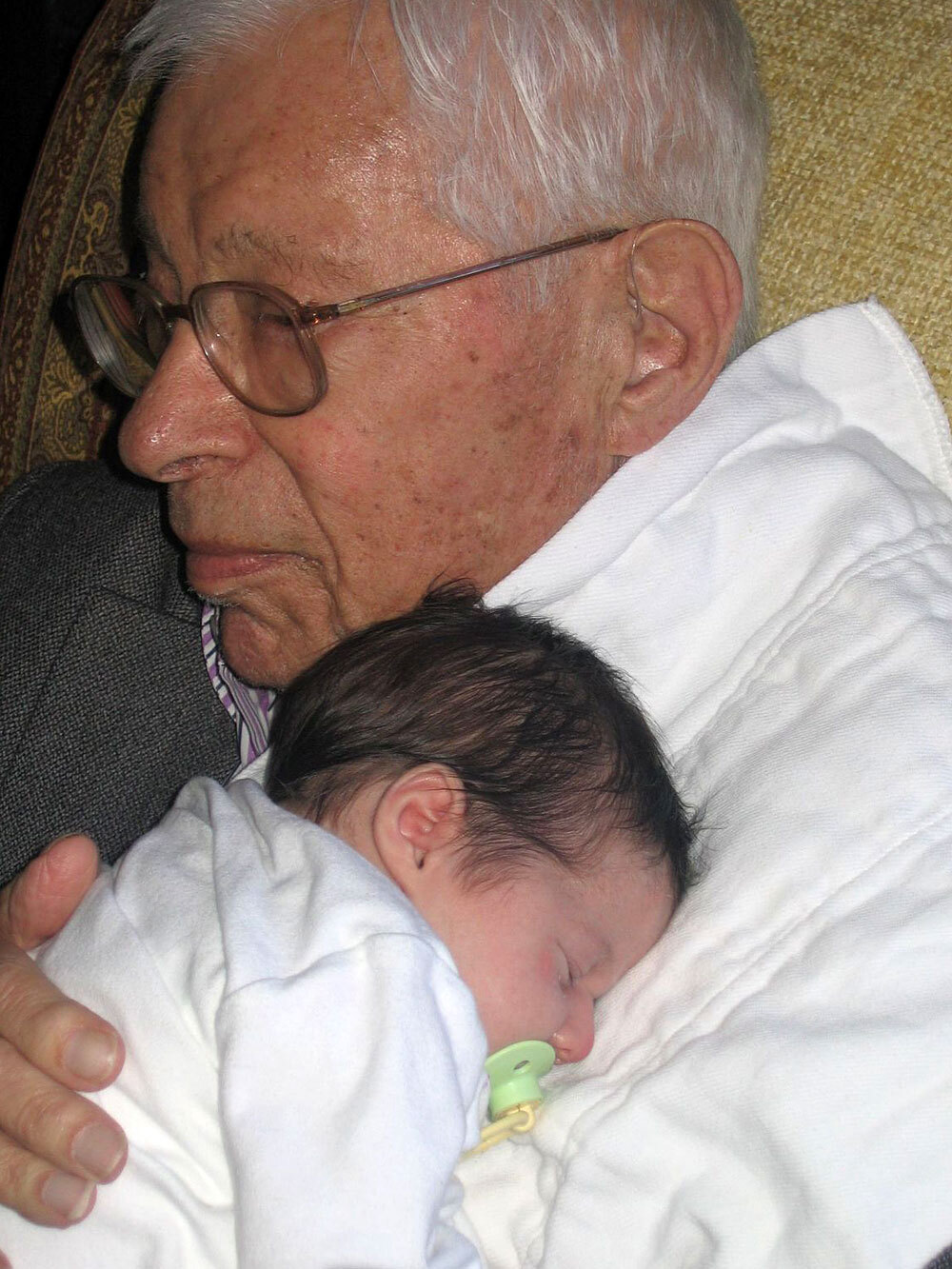 Courtesy of the Schorr Family

Advice For A First Grandchild

Happy Despite The Depression

As part of StoryCorps' National Day of Listening project, longtime journalist Daniel Schorr talked with his son Jonathan about how living through the Great Depression helped shape his life.

For one, Schorr says, he can't walk past an unoccupied room that has a light on without going in to turn it off.

Those fears of waste and of not having enough did not deter Schorr, who turned 93 this year, from standing his ground with employers, but he says there was some worrying.

"It really is true that I sometimes will stand up for principle at the risk of my job," he says. "It is also true that when I lose my job, I get terribly nervous."

Often, after he pushed back, he would say to himself, "Oh my God, what have I done now?" says Schorr, who contributes regularly to All Things Considered, Weekend Edition Saturday, Weekend Edition Sunday and NPR live coverage of breaking news.

The National Day of Listening project encourages people to sit down with a loved one the day after Thanksgiving and record a meaningful conversation.

As a tough reporter, NPR's senior news analyst Dan Schorr has been listening for decades. Nikita Khrushchev, Fidel Castro, even Congress have bent his ear.

Today, we've turned the tables for the National Day of Listening project we mentioned earlier: Jonathan Schorr interviewed his father, Dan. Jonathan wanted to know about his father's childhood. Dan Schorr grew up in poverty during the Great Depression, so Jonathan asked if his father's money-saving habits -turning off the lights at home, for example - began early.

DAN SCHORR: You're picking on a sensitive subject, son, it's sensitive between your mother and me because�

SCHORR: �because she doesn't have this hang up. I cannot pass a room with the light on in it if nobody is in that room without going in to turn it off. I practically follow your mother around sometimes in the course of the evening, as she goes from place to place turning on lights, and I go from place to place turning out lights. It made a deep and engraved impression on me way back then that one didn't waste things and you certainly didn't waste electricity, because we could hardly afford to have it. Yes.

Mr. JONATHAN SCHORR: So the thing that's fascinating is that you would think that the results of that would be that you would be really concerned about keeping your job.

SCHORR: And I am.

Mr. SCHORR: But the reverse is true. Well, but you've never been afraid to stand on principle if it meant losing your job.

Mr. SCHORR: But you've done it again and again. I mean, you stood up to the heads of CBS and of CNN. And you're actually known as somebody who is quite fearless on that point. And I'm just curious how those two things reconcile themselves.

SCHORR: They don't reconcile themselves very well. It really is true that I would sometimes stand up for principle at the risk of my job. It is also true that when I lose my job I get terribly nervous.

Mr. SCHORR: I remember pretty clearly, and I think I must've been about nine at the time that you had this congressional report on the CIA.

Mr. SCHORR: The report had been given to you and then had been reclassified, and you made a decision to publish it. The House Ethics Committee was debating whether to send you to jail for this, CBS fired and unfired you. It was a pretty scary time.

SCHORR: And it was more than - even more than that. There were also these super-patriots who called up and left messages saying they were going to waste me. And we got to worry about you and Lisa walking to school. Yeah, it was a scary time.

Mr. SCHORR: Did you always know through all of that, that everything was going to come out okay?

SCHORR: No, I didn't. I can recall the episode before I appeared before the House Ethics Committee, my lawyer at the time, Joe Califano said, Dan, you better get ready. They may cite you for contempt, which can bring you a couple of years in jail and $100,000 fine. And I gulped and I said, I guess I'm ready for it. But who's ever really ready for the prospect you're going to jail for a principle?

Mr. SCHORR: I want to cut to 1966 or so. In one year just before you turned 50, you went from foreign correspondent living out of European hotels for decades at that point, covering some of the great capitals of Europe and so on, to becoming a married, home-owning father in Washington, D.C. And all those changes happened in the course of a year. Did something change in 1966?

SCHORR: Well, let me say that something must have changed, but it's very difficult for me to spot exactly what or where the change was. I did not know, when I met your mother, that this was going to be different. I only knew that at one point on one evening, when she had cooked dinner and cooked liver, which I like very much, and this may sound funny, but I did, I fell to my knees and I said, anybody who can cook liver like that, will you marry me? And then all of a sudden, within a few months, bang, bang, bang, bang, bang, I own a house, I'm working on a book and I'm going to marry Lee Bamberger.

Mr. SCHORR: So you've been doing this now for what, about 70 years?

Mr. SCHORR: It seemed like when we got to talking about having this - was I right in sensing that you were pretty excited about doing this?

SCHORR: Yes. Excited and shall I admit to you also, a little nervous?

SCHORR: I mean, that, it's very funny, my dear son who's very close to me, why should I be nervous? And the answer is because it's a totally new experience. I've done, I don't know how many million interviews that I have done, but the idea that my own son is sitting there in front of the microphone who's going to ask me questions, boy, I better have some good answers. This goes to the heart of who I am and who you are. And so it's a kind of a new dimension of interview, and I was excited.

Mr. SCHORR: Well, this has actually been really fun and very much looking forward to seeing you at Thanksgiving, Dad.

HANSEN: That was Dan Schorr with his son Jonathan for the National Day of Listening. More of their interview, like Dan's advice to his new grandbaby is at NPR.org. And you can record a conversation just like this with a loved one. There are tips on how to do it at NationalDayofListening.org.