Accessibility links
The Jazz Loft: Introduction And Tales Of The Tape In 1957, a photographer moved into a building known as a hangout for New York City's top jazz musicians. W. Eugene Smith began to obsessively tape-record and photograph everything he saw and heard.

Tales Of The Tape: Introducing The Jazz Loft 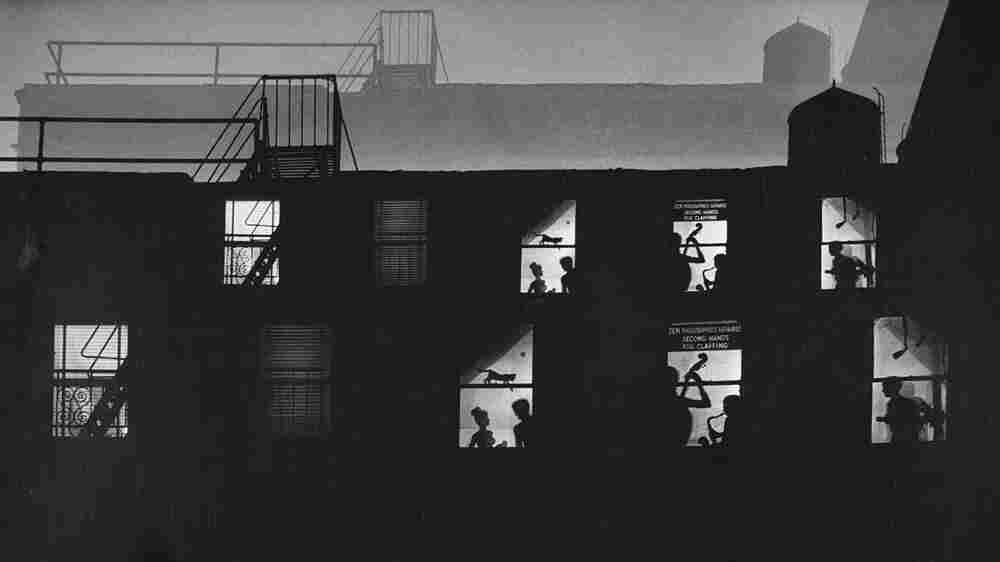 Photographer W. Eugene Smith documented tens of thousands of photographs in and around his loft apartment, including this double-exposed nighttime shot of the space. W. Eugene Smith/©1957-1965, 2009 The Heirs Of W. Eugene Smith hide caption 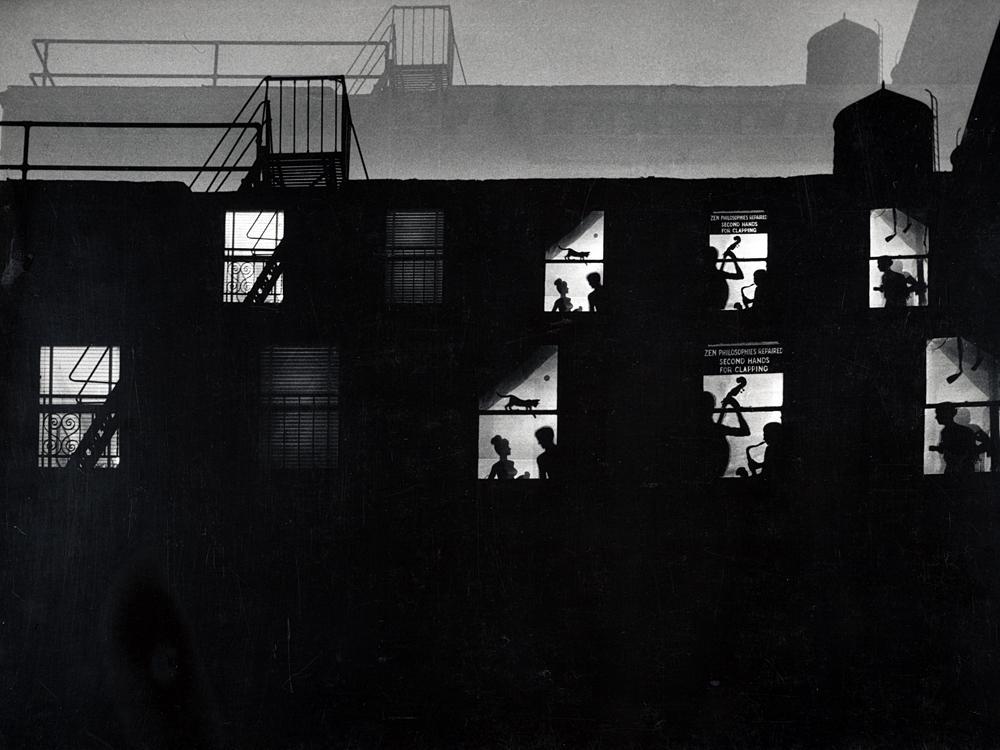 Photographer W. Eugene Smith documented tens of thousands of photographs in and around his loft apartment, including this double-exposed nighttime shot of the space.

Upon entering 821 Sixth Ave. in Manhattan, starting in 1957, you might hear the warped door of the old building. Then you'd be greeted by photographer W. Eugene Smith, who rented space there for several years. More than likely, you'd be photographed by him. 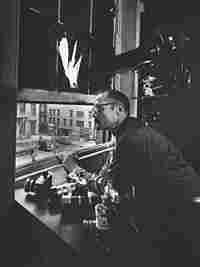 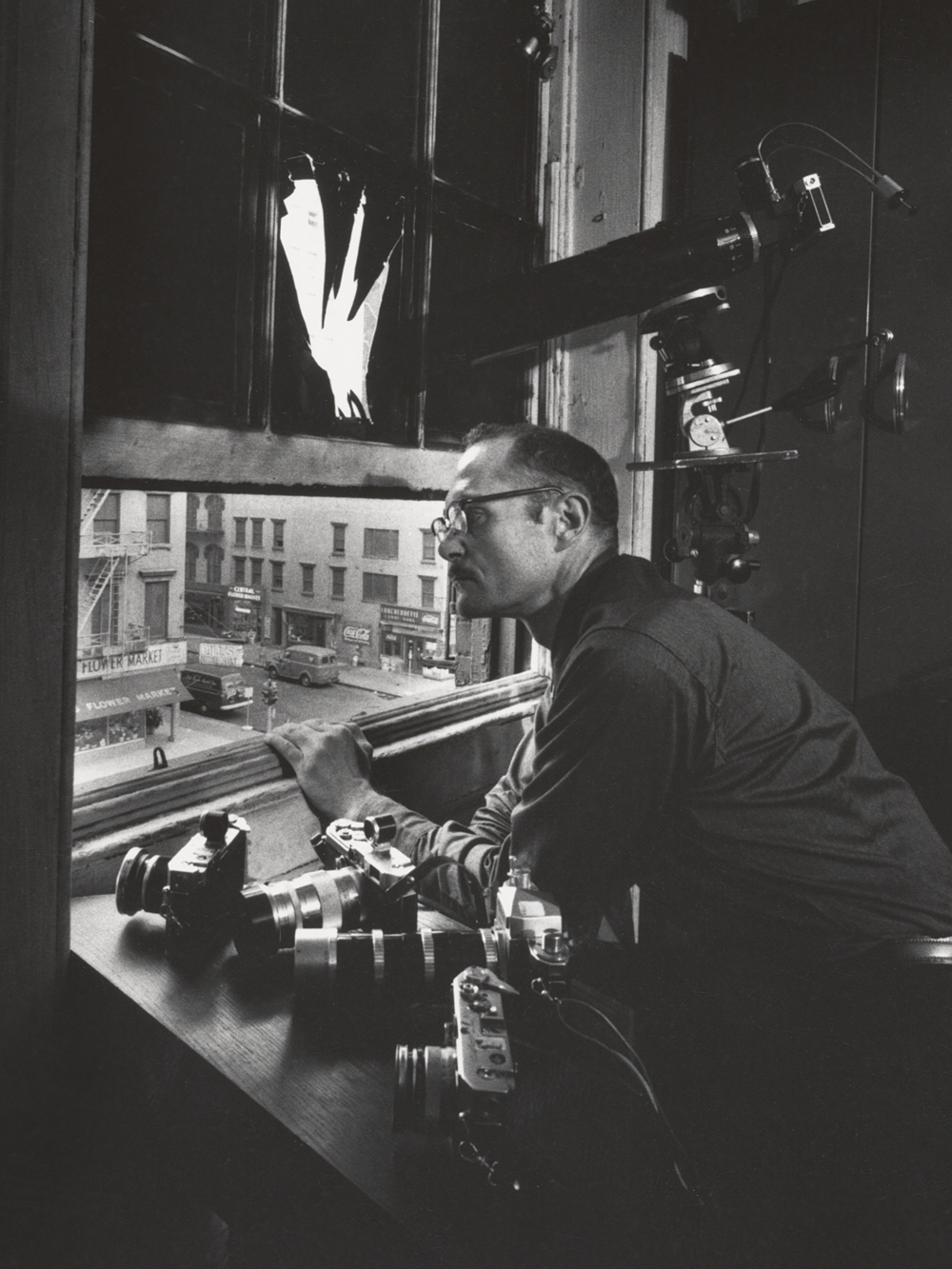 "He had a remarkable six-shooter style," says pianist Paul Bley. "You'd be standing in the hall with him at the loft, and while he was chatting you up and being very attentive and intriguing, the camera was at his kneecap level, and he would snap, snap, snap."

Smith was also, less obviously, audio tape-recording nearly everything that happened in the loft. Nearly 600 people, over the years, came through, talked, crashed there and played music — people like guitarist Jim Hall and composer David Amram.

"I'd heard about it from the different musicians because all of us — I came to New York in 1955 — had a kind of wonderful underground community where the catchword is: Where's the session?" Amram says.

"Someone'd say: 'A bunch of us are going to go to this painter's loft on Sixth Avenue after work, would you like to come along?' " Hall says. "Probably something very casual like that."

"And no one said, 'Let's be spontaneous,' " Amram says. "It was just something that was in the air, and jazz reinforced that spontaneous feeling and that daring and that virtuosity in everyone."

The Jazz Loft already had a history by the time Smith moved in. A gregarious jazz-loving painter, David X. Young, discovered the five-story walk-up in the mid-1950s. He had been looking for a cheap place to paint.

This place was cheap, all right: $40 a month, barely any electricity or water. It was located in New York's commercial flower district, in the west 20s along Sixth Avenue; the neighborhood was completely deserted at night. Bass player Bill Crow, among many musicians, befriended Young.

"He got a piano up there, and we were welcome to come and play," Crow says. "Zoot Sims, Bob Brookmeyer, Dick Katz ..."

All the famous players of the day stopped by to rehearse, hang out and jam, as vibraphone player Teddy Charles tells it.

"Miles, Mingus, Art Blakey," Charles says. "Of course Bird [Charlie Parker]; when Bird came, it was like a visit from God, you know."

Then W. Eugene Smith, a celebrated Life Magazine photographer given to shooting 3,000 photos while on assignment to shoot 30, was drawn to the space. He left his family in a small town up the Hudson River, and moved in.

His son, Pat Smith, visited the loft many times as his estranged father became entrenched.

"He kept renting more and more floors, and stored more and more stuff," Pat Smith says. "It's kind of a wonder the whole place didn't collapse."

In the 1950s, loft dwellings were still an underground way of life, recalls Amram, the composer.

"You weren't supposed to live in them, but they did," Amram says. "And they were basically workplaces that had either been abandoned or kind of left to people to renovate on the sly — and artists of different kinds would sneak in there to live."

Sam Stephenson, author of the new book The Jazz Loft Project and the man who uncovered the tapes in the Smith archive, notes that there was some deception involved.

"They had to have plywood boxes that they put over top of their mattresses to hide the fact that they were sleeping there, because the cops would come over and write them some sort of citation," Stephenson says.

"It was what we called a funky place," says pianist and songwriter Dave Frishberg. He was a regular in the loft. "Funky now has become a term of enthusiastic approval, but in those days funky meant messy, dirty and smelly."

Eugene Smith felt right at home there. He turned his tape recorders on soon after he arrived in '57. He began with the idea of recording his cats.

"A lot of cats," says his son Pat Smith. "I don't know how many cats he had. I couldn't even guess. There were cats everywhere."

He recorded the television and radio programs he had on, daily, in the loft, as he was printing and working in his darkroom. He taped his own phone calls.

In one room and another, musicians gathered for jam sessions. He taped those, too, says his former assistant and colleague, photographer Harold Feinstein.

"Gene Smith not simply turned his tape recorder on, but he practically wired the whole loft upstairs and downstairs so that he could tape everything," Feinstein says. "So this was both a project of his, or he was an extraordinary voyeur or both. Yeah, probably both."

All this at a time when, as bass player and loft regular Steve Swallow recalls, it was a rather odd thing to be doing.

"The machines were still fairly primitive," Swallow says. "It wasn't that far from the days of wire recorders, and people didn't commonly have tape recorders at that time. So it was a kind of innovative and exciting venture that he was involved in 1960."

So, as it turns out, the Jazz Loft was much more than just jazz. Stephenson led the project to organize, digitize and catalog the tapes.

"What we really honed in on from an early stage was everything but the music," Stephenson says. "What were the conversations about? What could you hear out of the window? Because it gave us a sense of what it was like to live in America, in New York City, in this particular neighborhood in Manhattan, in this time period, in a manner that nothing else could."

So, we wander into sounds and stories of life in a grimy old building in some of the golden years for jazz in New York. Of course, Eugene Smith recorded a lot of that music, too.