Accessibility links
The iPod: 'A Quantum Leap In Listening' It wasn't the first player to offer music on the go; remember the Walkman? And it wasn't the first portable MP3 player. But its impact is undeniable. Launched in 2001, the iPod represents one of the signal musical events of the decade that's coming to a close. 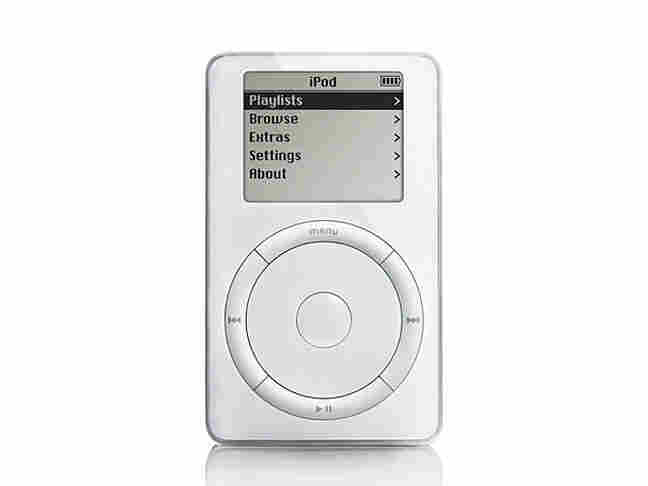 The first-generation iPod, which was released in October 2001. Courtesy of Apple hide caption 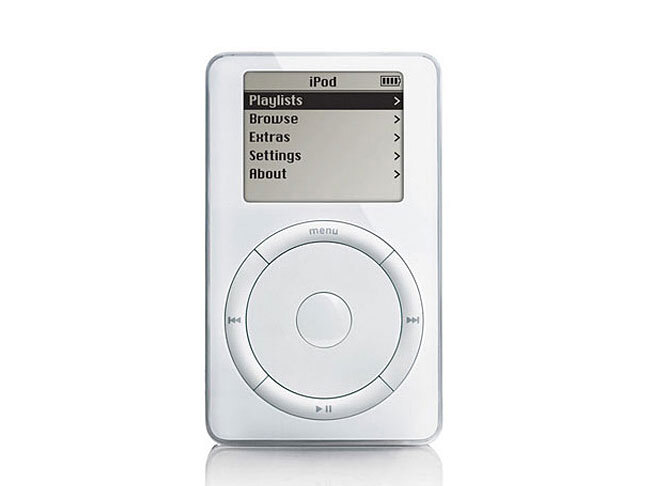 The first-generation iPod, which was released in October 2001.

The iPod wasn't the first player to offer music on the go — remember the Walkman? And it wasn't the first portable MP3 player. But its impact is undeniable. Launched in 2001, the iPod represents one of the signal musical events of the decade that's coming to a close.

When it was introduced, Steve Jobs, founder of Apple, stood in front of a San Francisco audience wearing his trademark jeans and black turtleneck, and said, "To have your whole music library with you at all times is a quantum leap in listening to music."

Apple launched the product with a series of characteristically savvy commercials: A geeky guy gets jazzed up to go out and dances around his apartment listening to his iPod. The player was about the size of a deck of cards and, like other Apple products, it looked cool. It was also easy to use. It had a white wheel on the front that let you scan quickly through the stored music library.

But it wasn't just the player that was so revolutionary — it was the software.

Sandy Pearlman, a record producer who has worked with Blue Oyster Cult and The Clash, among others, was also a founder of eMusic — one of the earliest legal downloading sites.

"We don't really understand now what a shock it was when it came out," Pearlman says.

He says that the iPod combined with the iTunes software created the first complete Web-connected portable music system.

"One of the most salient proofs of concept that it demonstrated," Pearlman says, "was that you could use the Internet on a seamless, really easy to use, like falling-off-of-a-lubricated-log basis."

And iTunes offered access to music from the major record labels. Up until that time, no company had succeeded in getting them to come together and be part of an online music site. But as a growing number of customers began to download music without paying, the industry realized that it needed to offer a legal alternative. Don Passman is an entertainment attorney who has represented R.E.M. and Janet Jackson.

"So when iTunes and iPod came along and wanted to put money into legitimately selling the music digitally — and put advertising and marketing behind it — the industry was very helpful," he says. The major labels were excited, he says, "to see that there was someone there that wanted to do something legal."

Despite its steep initial price and problems with its batteries, the iPod took off, selling more than 225 million units to date. Now, when a candidate runs for office, he or she had better be prepared for the inevitable question. During the presidential campaign in 2008, both Barack Obama and John McCain were asked to reveal their iPod playlists.

When Obama met the Queen of England, he gave her an iPod. But eight years after the first iPod, this one included videos and photos. Now, there's the iPod Touch and the iPhone, which can connect directly to the Internet. And that just makes the regular old iPod as obsolete as the Walkman.