Accessibility links
What It's Like To Sing With The Kinks' Ray Davies Most of the time, Jeff Lunden reports for NPR from the outside looking in. But last month, his chorus was invited to back up the great Ray Davies of The Kinks, in a couple of concerts in New York City. Lunden reports from his 15 minutes of rock fame. 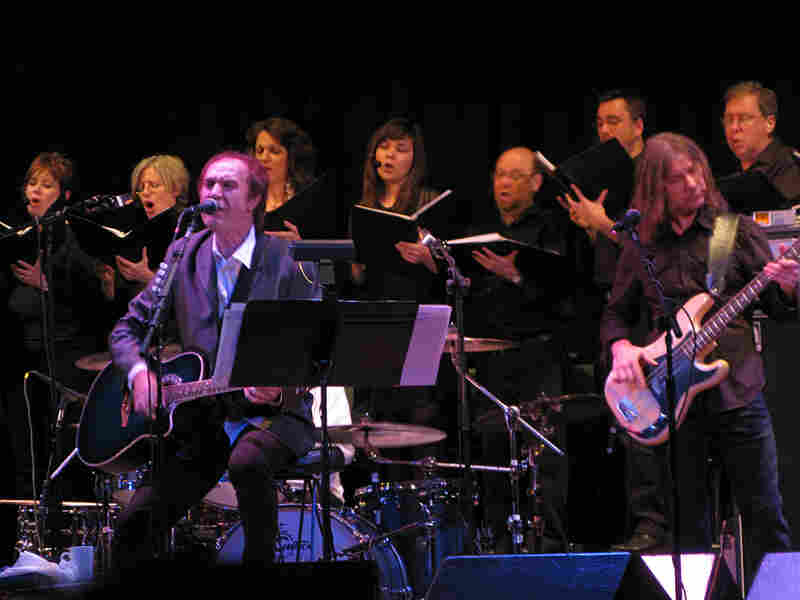 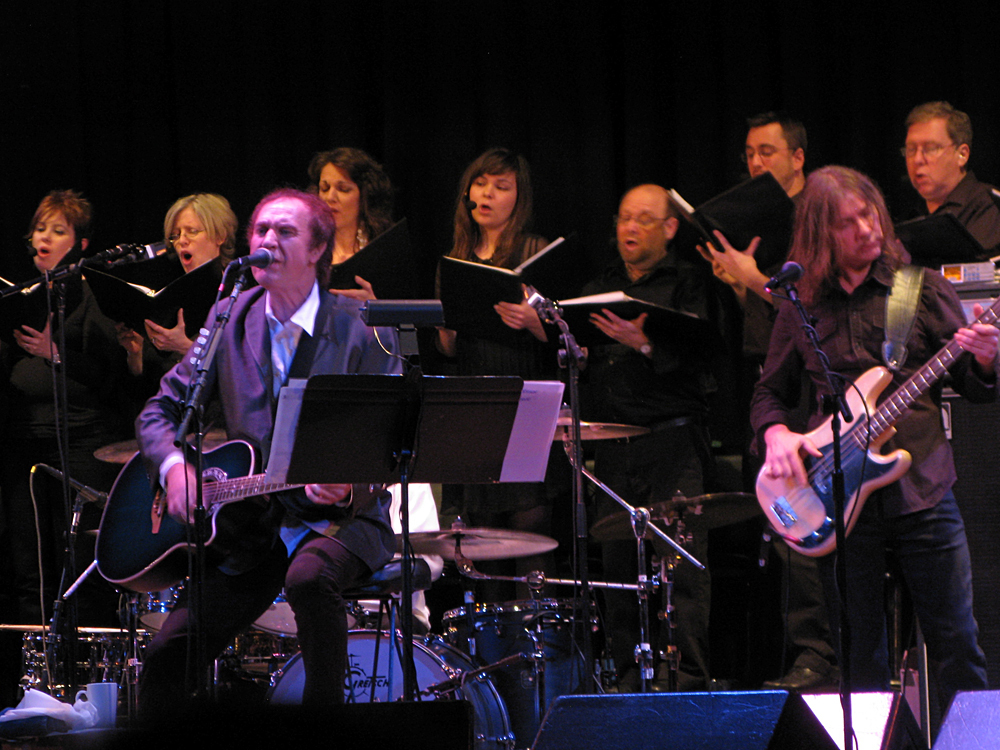 Ray Davies (left, acoustic guitar) performs with the Dessoff Chamber Choir at Town Hall in New York. Reporter Jeff Lunden is third from right in the row of singers.

Listen to a complete recording of Ray Davies performing with the Dessoff Chamber Choir:

I started singing in choirs when I was a kid. So did Ray Davies.

"I went to school in Muswell Hill," Davies says. "It was a Church of England school, and the headmaster was also the choirmaster in the local church, so it was obligatory. And we were rehearsed at school. I took to it, because we'd get a few lessons off because we sang in the choir. We missed maths."

And that is where the similarity ends. When I sing, I'm just one of dozens of voices in an amateur chorus called the Dessoff Choirs. When he sings, he's the voice of one of the most influential rock bands of the 1960s: The Kinks.

So, when my choir — which, to be fair, has sung classical music at Lincoln Center and Carnegie Hall — got the call to sing classic Kinks songs with Ray Davies ... well, it was a blast.

For a few concerts in New York, and on the Late Show with David Letterman, we sang arrangements from his new album, The Kinks Choral Collection. It's a collaboration between Davies and the Crouch End Festival Chorus in London.

David Temple, who conducts that choir and conducted us, says Ray Davies came to hear his group sing a few years ago.

"We went to the pub afterward, and he said, 'Look, I've just been asked to do the Electric Proms for the BBC, and they say you have to have something different to what you normally do, so I've got this idea of having the choir there, as well,' " Temple says.

It went so well that they decided to record an album that spans 45 years of Davies' career. It includes some of his hits and some of his lesser-known songs — like "The Village Green Preservation Society."

"[The Kinks Are] The Village Green [Preservation Society], which is a little-known Kinks album — well, it's very well-known among Kinks fans, but to the rest of the world, it's virtually unknown," Davies says. "It's a strange album I did about England. It's all about a community — a community of kind of mystery and fantasy."

One of the most enjoyable arrangements to sing from that album — for me, anyway — was "Picture Book." It features some of Davies' most sardonic lyrics, and the chorus sings a lot of the band's instrumental licks and backup vocals.

When the choir I sing in performs classical music, we don't get audience feedback until the end of a piece — which can come at the end of a concert. But in Town Hall, in front of 1,000 rabid Ray Davies fans who know every word of every song, we got feedback immediately.

"Two of the moments in the show that I find really rewarding are the two times that the audience and the choir sing together," Davies says.

Perhaps the boldest choral arrangement on the album — and one of the most striking moments in concert — is The Kinks' 1965 song "See My Friends." There's no band — just an a cappella chorus and Ray Davies.

Davies says that, for an old rocker, it's nice to revisit his old friends.

" 'See My Friends,' for example, is a very simple — seemingly very simple — pop record, but it's evolved into something," he says. "It's a relief that the songs have withstood the test of being transcribed and put into this context."

For me, I'm still basking in my 15 minutes of rock fame.