Accessibility links
Manure, Fertilizer Part Of Chesapeake's Problem The federal government has been fighting pollution of the Chesapeake Bay, the nation's largest estuary, for 25 years. But harmful nutrients, particularly nitrogen and phosphorus, continue to flow into its waters — and they're often traced to nearby fertilizer- and manure-laden farms.

After two decades of raising chickens at her farm on Maryland's eastern shore, Carole Morison quit last year, in part because she was tired of polluting the Chesapeake Bay.

"I'll be the first one to say that I'm part of the problem," Morison says. "My only wish is that other people would own up and quit the denial and finger-pointing and say, 'We have a problem. Let's fix it.' "

More than 25 years ago, the federal government and several states pledged to restore the Chesapeake Bay. But the nation's largest estuary is still so polluted that every summer, a stretch dozens of miles long is starved of oxygen to the extent that conditions are not suitable for fish and many other animals. 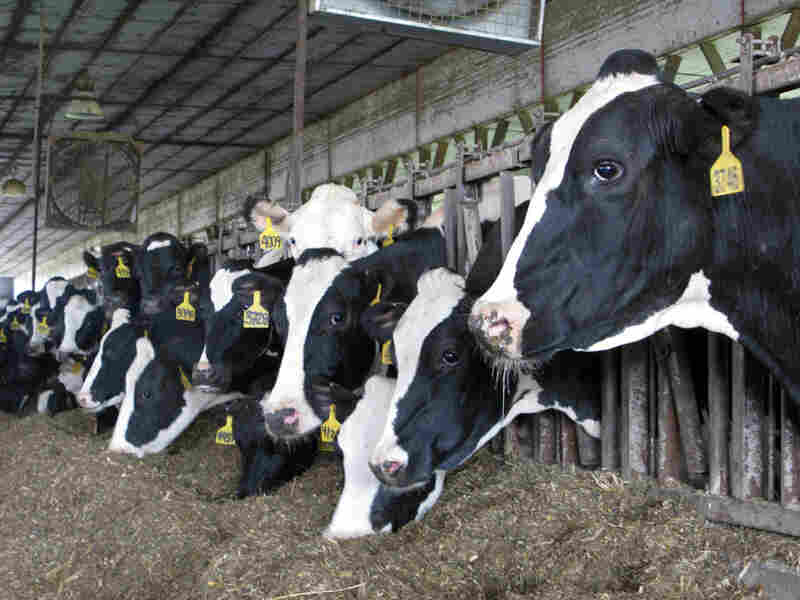 Although these cows are milked 400 miles upstream from the Chesapeake Bay, they could be part of the pollution problem that has vexed the nation’s largest estuary for decades. Manure and other pollution from parts of six states and Washington, D.C., all drain into the bay. Katia Riddle/NPR hide caption 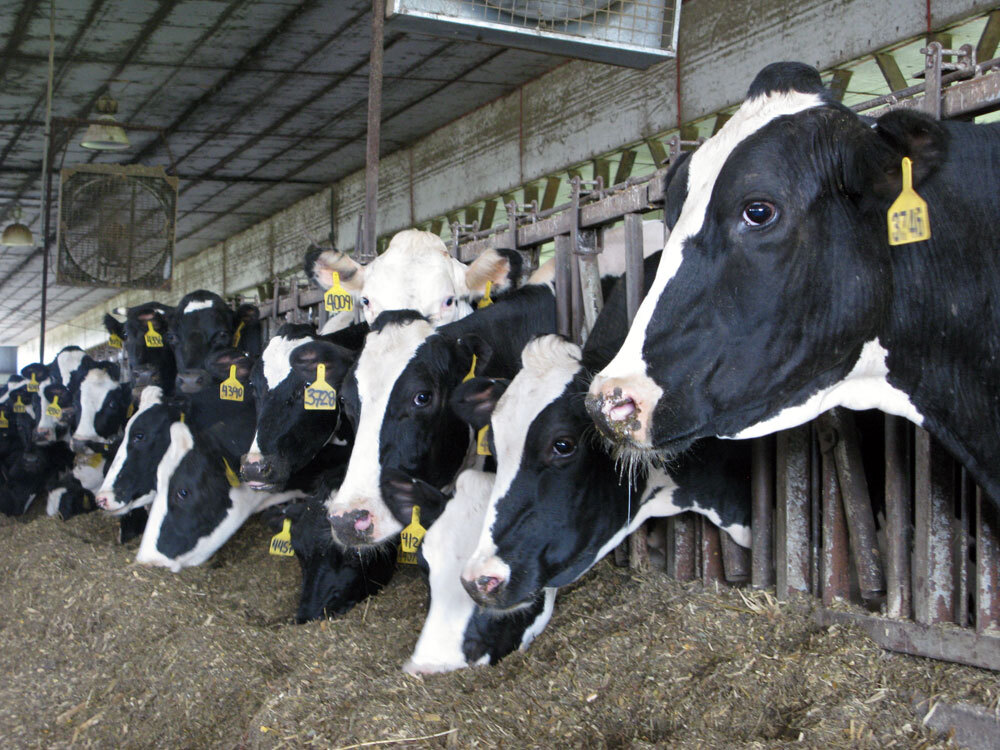 Although these cows are milked 400 miles upstream from the Chesapeake Bay, they could be part of the pollution problem that has vexed the nation’s largest estuary for decades. Manure and other pollution from parts of six states and Washington, D.C., all drain into the bay.

Oyster and crab populations are at fractions of their historic levels. President Obama says it is time for a new strategy to heal the bay.

One reason the cleanup has failed is that the bay's watershed is huge: Pollution from six states and Washington, D.C., drains into it. When it rains, manure and chemical fertilizers run off dairies in rural New York and Pennsylvania, turkey farms in Virginia's Shenandoah Valley, and chicken operations in Delaware and Maryland.

Chicken Farms Pollute By Air And By Water

Two huge chicken houses still eclipse Morison's modern yellow farmhouse. She cracks the door of one of them to show how some of that nitrogen gets into the bay.

In this audio slideshow, former farmer Carole Morison gives a tour of her land and discusses the impact of agriculture on the Chesapeake Bay. 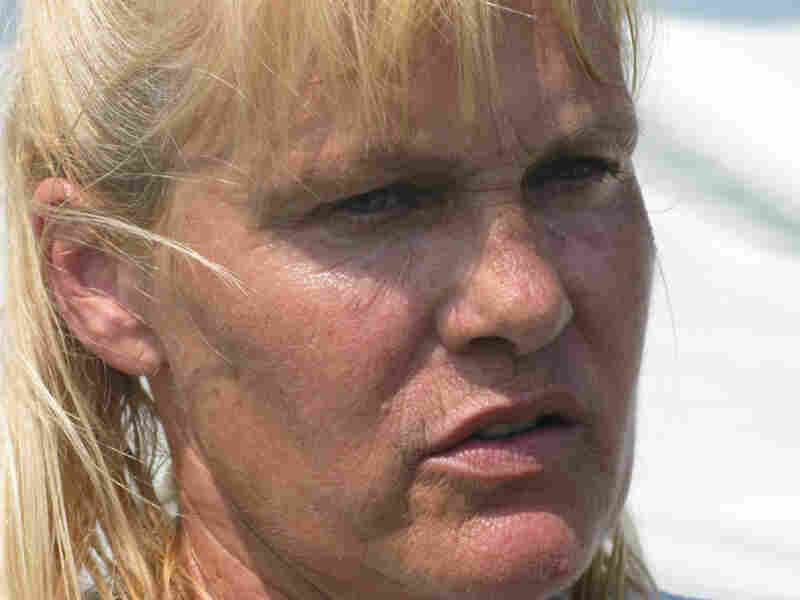 "I am warning you," she said. "This is a really strong odor of ammonia, and this is after a year of no chickens being in these houses."

The stench is so strong, it's hard to breathe.

Chicken operations in this area use big fans to blow the ammonia out of the houses. When it rains, the rain brings the ammonia down to the ground as nitrogen. Ammonia air pollution from livestock operations across the bay's huge watershed is responsible for about 6 percent of the nitrogen in the bay, according to the Environmental Protection Agency.

But Morison says chicken operations like hers on the Delmarva Peninsula pollute in a more direct way.

The Delmarva Peninsula is the low-lying stretch of land shared by Delaware, Maryland and Virginia that divides the bay from the Atlantic Ocean. The industry estimates that 2,000 farms raise chickens there. Because the land is so flat and soggy, ditches run everywhere.

There's one about 30 feet from the huge shed where Morison stored the manure from the hundreds of thousands of chickens she raised each year.

The shed is the size of a pro-basketball court. Deep ruts and potholes are leftover from the heavy machinery that was used to carry away the manure.

Morison points to one full of sepia-colored water, which she says is a telltale sign of manure.

Dissolved oxygen is vital to marine life, but this map shows that the Chesapeake Bay's supply is depleted during the summer months. In what is known as the "dead zone" — where the red streak is on the map — fishermen's nets are coming back empty because there isn't enough oxygen in the water to sustain them.

She often saw that "manure tea" in the ditches that drain her property. They empty into a small creek behind it, which flows into the Pocomoke River, a tributary of the Chesapeake Bay.

Morison says pollution is "inevitable" from operations like hers.

"It's no wonder we're failing miserably at cleaning up the bay," she adds.

Dead Zone Beneath The Surface

Across the Chesapeake from Morison's farm, University of Maryland professor Thomas Miller studies the bay from the university's Chesapeake Biological Laboratory on Solomons Island.

The scene of the Patuxent River flowing into the bay is gorgeous from the pier outside his office. But Miller say the beauty of the bay above the water's surface gives people a faulty impression. To judge the bay's health, you have to look under the surface.

"Until quite recently, there would have been large sea grass meadows and large oyster reefs in front of this area," says Miller. "And now if you were to look out there from one of our research vessels, you'd find those almost completely gone. Even though the view on the surface looks unchanged, the view underneath the water would be very different," Miller says.

Miller gets a glimpse of what's going on below the bay's surface when he tows a huge net behind a ship to survey fish.

In most regions of the Chesapeake Bay, the nets pull up thousands of fish, but not in the long thin stretch of the bay that has very low oxygen during the summer.

See A Map Of The Chesapeake Bay Watershed Basins (PDF)

"You can pull a net through that water and come up absolutely empty. And it is really quite startling to bring a net on board with no fish at all," Miller says.

It is known as the dead zone. Animals and fish simply cannot survive in that water, and have to leave.

Miller blames overfishing for nearly wiping out oysters. But he fingers nitrogen and phosphorus for his empty nets. It's not just local farms that cause the trouble. Much of that pollution comes from manure and chemical fertilizers used on farms far from the bay. 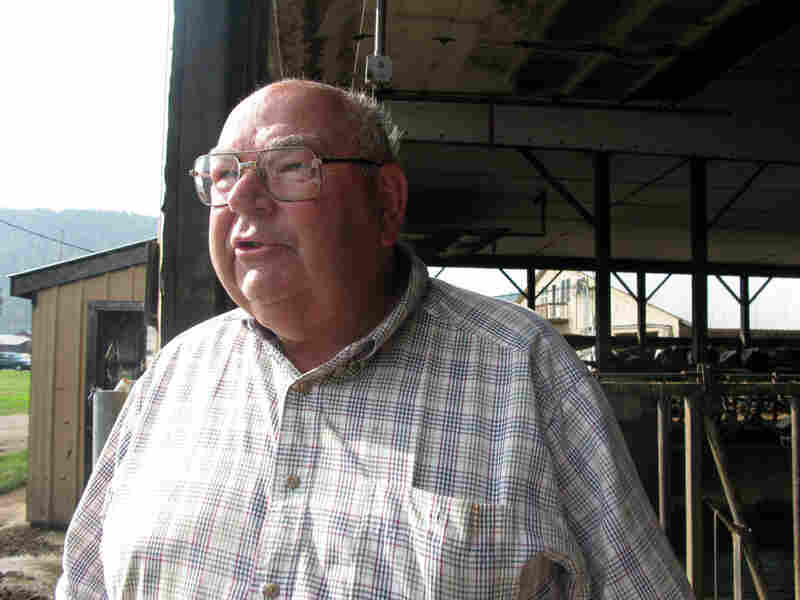 Dairy farmer Bob Aman from rural Candor, N.Y., says farmers are doing what they can afford to do to reduce their pollution to the Chesapeake Bay. Katia Riddle/NPR hide caption 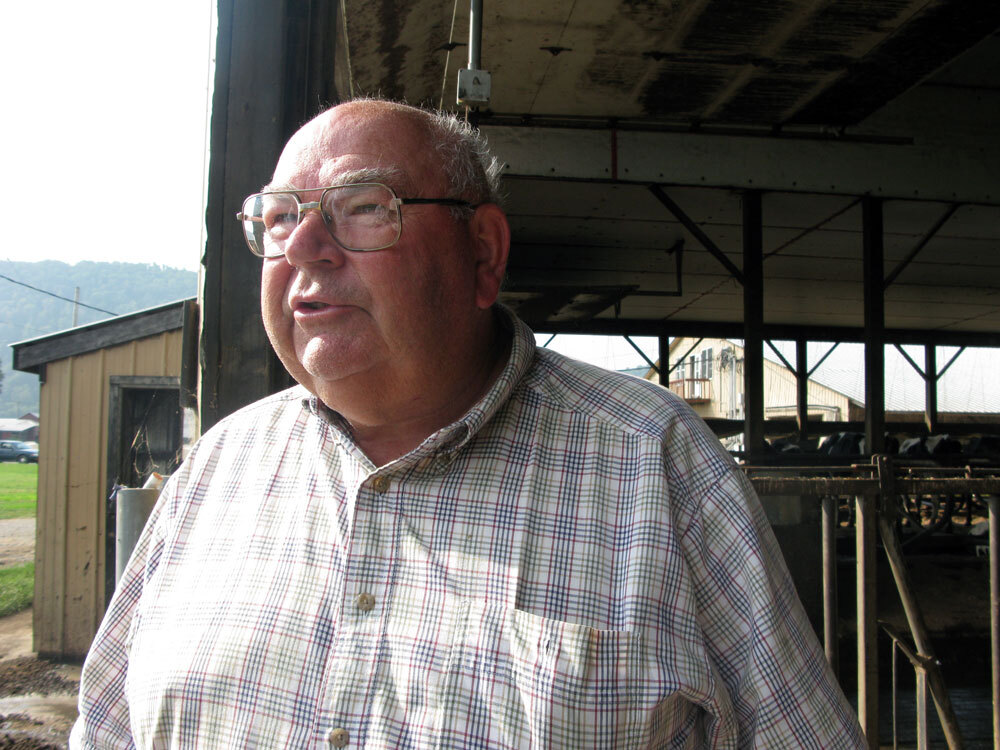 Dairy farmer Bob Aman from rural Candor, N.Y., says farmers are doing what they can afford to do to reduce their pollution to the Chesapeake Bay.

The pollution even comes from dairies 400 miles northwest of the bay, in the headwaters of the Susquehanna River, the bay's biggest tributary.

One of the reasons it has been so hard to clean up the bay is that pollution from six states and Washington, D.C., drains into it. Many of the people who live in the watershed rarely think of their connection to the bay.

Bob Aman runs a big dairy in the rolling hills of Candor, N.Y. The creek that flows through his pasture dumps into the Susquehanna River.

"Everything that flows from here ends up in the bay, if it flows that far," he says, as he stands next to the picturesque stream.

Aman keeps 500 milk cows in one huge barn, and each day they produce 15,000 gallons of manure.

He uses a contraption called a digester to turn much of the manure into gas, which he uses to generate electricity.

He spends a lot of time and money trying to keep manure out of his stream. But many of his neighbors still spread manure on fields — even when they're covered with snow and can't absorb the nitrogen and phosphorus.

Aman says at least farmers know they're part of the problem, and they do what they can afford to do to avoid polluting.

"We as farmers are getting a little tired of everybody pointing their finger at us. I think we're a little bit of a scapegoat. There's as much pollution coming from lawns and detergents," he says.

In fact, cities, towns and industrial areas together do pump more nitrogen and phosphorus into the bay than agriculture. The Obama administration has put states on notice: Unless they slash pollution to the bay from all sources, the federal government will have to step in.