Accessibility links
YouTube: Online Fame For Everyone Launched in early 2005, YouTube has changed the way we communicate. The video-sharing Web site has given us a new way of reaching each other, not to mention shortcuts to fame, nostalgia and togetherness. 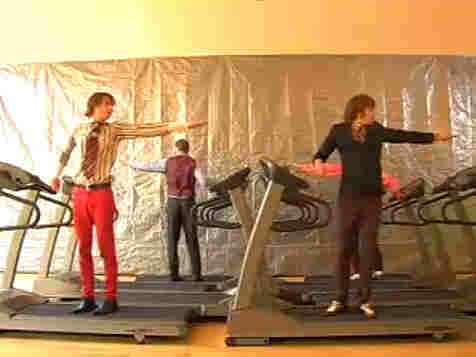 Remember OK Go's video for "Here It Goes Again" from 2006? It seriously is the top result when you search YouTube for "coolest music video ever."
courtesy of the artist

Launched in early 2005, YouTube has changed the way we communicate. The video-sharing Web site has given us a new way of reaching each other, not to mention shortcuts to fame, nostalgia and togetherness.

Let's start with the ways YouTube has reconfigured the definitions of celebrity and stardom. Remember when your only shot at getting millions of people to watch a video of your cat playing the piano was to send it to America's Funniest Home Videos and hope for the best?

Now, you can instantly upload videos not just of your cat playing the piano, but also your cat's pre-recital stretches and routines, those outtakes where your cat feigned ignorance of Beethoven, and the time he refused to play anything but Leon Redbone. Next, you can watch about 500,000 other cat videos — and revel in the fact that cats are talented when it comes to music, while dogs seem to excel at skateboarding and swimming-pool antics.

Five years after the Web site launched, movie, television and music executives now look to YouTube as a recruitment tool. And news outlets use YouTube videos for their human-interest stories. Which means that more people than ever really, truly believe that they can be famous — that they can get their 15 minutes.

But what does fame even mean in the world of YouTube? After all, a 4-year-old in her nightgown singing The Beatles can become as big of a sensation as, well, The Beatles themselves. YouTube makes the promise of fame ever more feasible, but it dismantles the notion of celebrity by making the stage big enough for all of us.

YouTube also feeds our nostalgia. Before YouTube, the only way to scratch the itch of sentimentality was to seek out our childhood toys on eBay, or to discover smudged and legless versions of them in thrift stores. Now, we don't have to collect Snugglebums, Weebles, Monchichi and Strawberry Shortcake Dolls; we can merely locate them in video form and then forward them along to our friends.

In fact, every time you doubt that something really existed, YouTube is there to tell you, "Yes, this existed. It really happened." YouTube is a sports stadium's JumboTron rendered in miniature. From the comfort of our home or office, we feel like we're all thinking about and tuning into the same things, and that's strangely reassuring.

YouTube has allowed us to find images and lives and people we never even knew we were looking for — like Susan Boyle or the "Chocolate Rain" singer or the guy crying about Britney Spears.

Finally, YouTube has made us think that all shows, all videos, should be brief. Why watch a whole movie, TV show, newscast or presidential speech when we can just watch the best parts of them on YouTube? The site truncates and distills. It's video haiku for people who like their poetry laden with hamsters on jet skis.

YouTube has turned real lives ­­­-- real events — ­­into segments as short as commercials. And what are we selling? Our lifestyles? Our hopes and dreams, our kids and pets? Our talents, or lack thereof? I guess what we're selling, and what we want people to buy into on YouTube, is our worth; the idea that each of us is worth someone's time and comments and views.

YouTube allows everything and all of us to be a spectacle, at least for a moment. But a moment is all we are after, or all we have time for — or so the world of YouTube would lead us to believe.