Accessibility links
New Orleans Casts A Wide Net For Teachers Educators in New Orleans are hiring teachers from all over the country through a variety of national training programs like Teach For America. Can New Orleans serve as a model for a national teaching market, or is the city relying too heavily on outsiders? 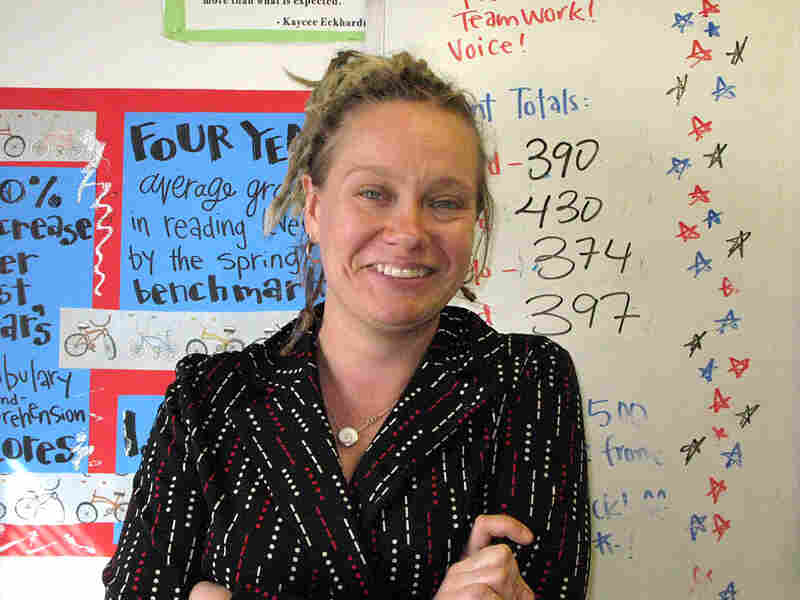 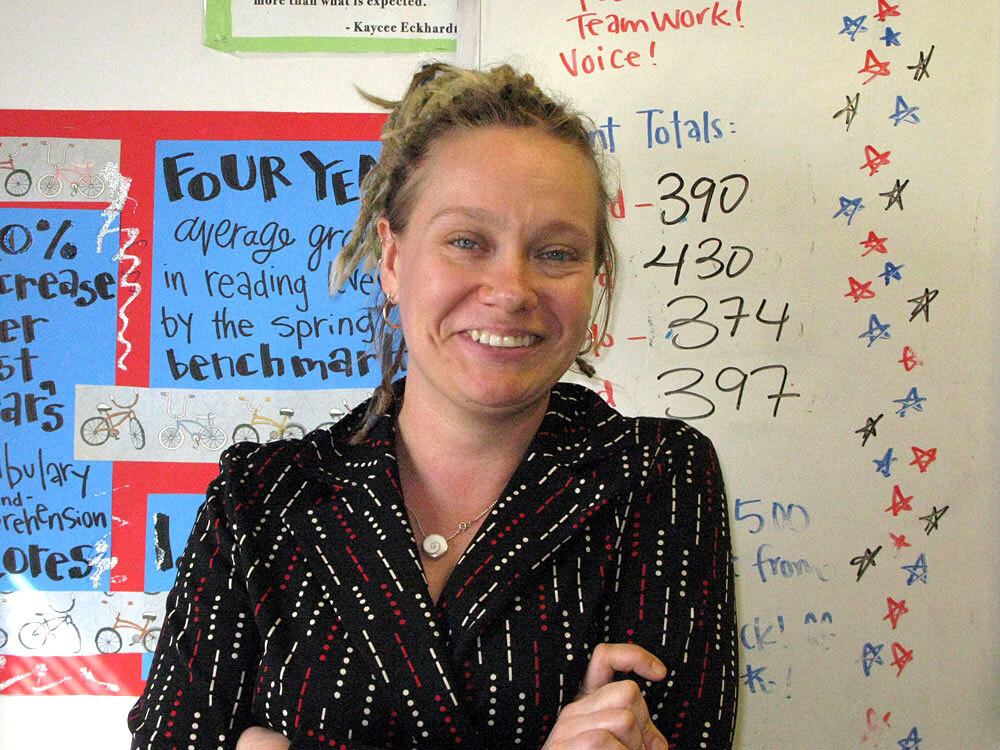 Kaycee Eckhardt, a teacher at New Orleans Charter Science and Math Academy, received her teaching training through "Teach NOLA," an alternative certification program in the city.

Second in a two-part report

Walk into a New Orleans charter or public school, and you're likely to meet teachers from all over the country working in the classrooms. It's not like that in many school districts in the nation, where teachers often work not far from where they went to school themselves. In fact, one study found that more than half of all New York City teachers were teaching just 15 miles from where they grew up.

But educators in New Orleans are trying to shake up that pattern by hiring teachers from all over the country through a variety of national training programs.

Hurricane Katrina helped get the ball rolling. After the storm, the existing school system was essentially dissolved, and the local teachers' contract was dropped. The city also then faced a huge teacher shortage, and it cast a wide net to attract new talent. But the dismal state of education before Katrina also had convinced local reform advocates that they needed to look far and wide for the teachers ready to confront one of the worst education systems in the country. Today, the teacher shortage has abated and some are asking these questions:

Can New Orleans serve as a model for a national teaching market? Or is the city relying too heavily on outsiders?

A good place to pose those questions is at New Orleans Charter Science and Math Academy. The campus is a sea of trailers. That's not unusual in New Orleans, particularly here in New Orleans East, which was devastated by Katrina. The kids come from all over the city, the teachers from even farther afield.

Kaycee Eckhardt followed an unusually long path to New Orleans: Her previous assignment was a four-year stint in Japan. But other teachers from this and a neighboring campus hail from Chicago, Memphis and Maine. And it's not just charter schools — teachers from all over the country work at traditional schools, too. The one thing they all have in common, says Eckhardt, is that they are on a mission

"I think you get very young, very intelligent, very enthusiastic, very liberal-minded people who are willing to put a lot of time in and a lot of commitment to the students that they have," Eckhardt says.

Ben Marcovitz, principal of New Orleans Charter Science and Math Academy, says that same drive has led to a teacher roundup from all over the country. "People who are fairly ambitious, fairly energetic, that's who we hire, period. And a hefty portion of those end up being connected with Teach For America," Marcovitz says.

Teach For America has nearly 500 people in the greater New Orleans area, making it one of the program's biggest markets. Other national programs, such as The New Teacher Project, have also found New Orleans to be a great magnet for reformers who want to jump into education with both feet. That has turned New Orleans into something unusual, according to Sarah Usdin, a local activist and head of New Schools for New Orleans. "There's a real market here for teachers. Teachers can shop around for schools they want to teach in. And school leaders are being highly selective about the type of teachers they want to build their teams with," Usdin says.

But Will They Stay?

Louisiana is conducting a groundbreaking study of teacher effectiveness. It looks at teachers from different teacher education programs and compares how their students do on standardized tests. Teachers who came through Teach For America and other nonprofits did very well in that study. Teachers from TFA outperformed other teachers who had a couple years of experience under their belts.

But those results have raised concerns among local educators, like Andre Perry of the University of New Orleans. Perry leads a group that helps run six charter schools in the city.

Perry says he is concerned that teachers from TFA and other programs who "descended" on New Orleans from outside the area may not stick around as long as homegrown teachers. Regardless of the test scores, "what's needed is some longevity in the profession," Perry says.

In fact, the same effectiveness study showed that teachers from TFA are much less likely to stay than other teachers. Few lasted in the profession more than three years.

Perry doesn't question the commitment of the new arrivals, but he says consistency is important. "And it's not romantic to say that people want to develop and grow in the areas that they lived in or grew up in. To lose that local flavor, it hurts the profession of teaching in terms of its local value," Perry says.

Usdin of New Schools of New Orleans agrees that retention is important. But "the thing that's most important is student learning. If a teacher is prepared and stays for 20 years and doesn't get student results," Usdin says, "that's a travesty."

The experience of New Orleans over the long term could answer important questions: Should teacher training programs be more selective? Should low-performing urban districts cast their nets nationwide, to find the most dedicated teachers? Or should they focus on better training of teachers who are already in place?