Accessibility links
How A Thorough De-Gazing Saved CBS's 'The Big Bang Theory' The Big Bang Theory has changed a lot in its first three seasons, never more than by giving its lead actress more to do than chirp and pose. 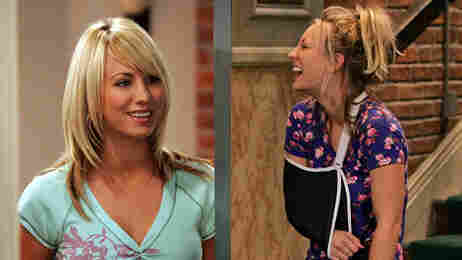 Left: the pretty, dull Penny from the pilot. Right: the loud, funny Penny we have now. CBS hide caption

As I've mentioned, I truly despised the pilot of CBS's The Big Bang Theory, which aired in the fall of 2007. I found it unfunny, obnoxious, stilted, and tired. But now, having been persuaded to try it again this fall — and intrigued by the fact that its audience was steadily growing, which very rarely happened — I've really come to love it, and because of the oddities of DVD availability, I wound up watching it in reverse order: first this season, then last season, then the first season.

When I arrived back at the first season, I thought to myself, "Well, I bet it's not as bad as I remember." After all, very often, things look different with perspective. (I didn't like the pilot of Friday Night Lights, either, but when I see it now, it holds up fine in the context of what came later.) And then an odd thing happened: it was much, much worse.

The Penny Problem and how it was solved, after the jump.

The pilot is terrible. The pilot is really, really terrible. And while there are many reasons for that — Leonard and Sheldon are too similar, their odd-couple dynamic isn't firing yet, Sheldon's quirks aren't cranked up to heaven yet, and the writing feels very "pilot-y," for lack of a more precise descriptor — the biggest problem is Penny, the only woman in the core cast, played by Kaley Cuoco. Penny lives across the hall from physicists Leonard and Sheldon, and while she's now Leonard's girlfriend and well-integrated with the guys and their friends, when the show started, Penny was not a person; she was a prop.

Nothing was ever seen from Penny's point of view; she almost never had a joke that wasn't at her own expense. Here's all her dialogue from the first scene she ever did:

But perhaps nothing speaks to the Penny problem that the show had early on any more straightforwardly than the way she's introduced. In the very first seconds of this collection of everything she did in the pilot, you'll see the first time Penny was ever on screen: framed by her door, little shorts, belly showing, in profile, seen but unaware of being seen.

In fact, Cuoco quite literally was using a different, more cartoony voice for Penny back then. Listen to her in this clip from later in the pilot (you'll notice her dialogue has not yet improved, but also that the one bright spot was already the spark of weirdness in Jim Parsons as Sheldon):

And then listen to her this season, in a snappy, funny moment where she explains exactly the thing Sheldon explained to her in the pilot scene:

Listen to how much lower her voice is now, how much less it sounds like a caricature, and how much easier it is to imagine that Kaley Cuoco, the actress, really sounds like that.

Now, characters always become more developed over the course of three seasons than they can possibly be in a 22-minute pilot meant to sell people on the concept. That's true of just about every show on television, and it's one of the reasons why pilots are usually so easy to spot in reruns. With this show, though, it continued past the pilot. In fact, Penny as a mostly blank slate continued through about the first eight episodes, which took the show to the break imposed by the writers' strike.

A few episodes later, in "The Pancake Batter Anomaly," Penny took care of Sheldon when he was sick, and her attitudes began to seem more specific and pointed. Perhaps one of only a handful of shows to benefit from that break, Big Bang started to turn things around somewhere around that point, even though the ratings had always been fine. It wasn't the giant hit it is now, but it didn't cry out for fiddling. Nevertheless, the fiddling happened, to the show's great benefit.

It becomes very evident when you go back to the old episodes that this was a fundamental revamp of how this particular show sees and treats the one woman in its regular cast. Even though there is still a running joke that Penny is hot and the nerds are overwhelmed by her, she gets her own punch lines now. The humor in her character isn't all external to her; some of it comes from her ability to observe and notice things, and from her personality quirks (a streak of competitiveness, or her junior-rodeo background), rather than her interplay with everyone else's. Rather than always seeming baffled and naive, she's very mom-like with these guys (well, the ones she's not dating) in a lot of ways. She still reacts, but she also acts.

Yes, I'm about to mention that she has her own power and her own agency and all those other things that discussions of the male gaze often entail. It may seem silly, and it's undoubtedly not what they had in mind, but there is a huge and significant difference between a Penny who never got her own jokes and mostly said "Hi!" and "Great!" and "What do you do for fun around here?" and a Penny who can, for instance, do what happens at the 1:08 mark of this wonderful montage:

When people say things like "male gaze," it's easy for it to seem (1) extremely obscure and (2) absolutely no fun at all, in addition to (3) not really relevant if you aren't in film school. But the changes in this particular show make for a great example of the fact that you don't just avoid empty, cliched versions of women (or men, and I am looking at you, Sex And The City) because they're offensive or infuriating or anything like that. The best creative reason to avoid them is that they make your show bad. Making Penny real has opened up all kinds of comedic possibilities that haven't transformed it into life-changing art, but have made it into a very good half-hour sitcom, which is an enormous change from the pilot — which is still just as excruciating as it was the first time I saw it.