Accessibility links
The Root Of All Opera: Monteverdi's 'Orfeo' It's hard to say who wrote the very first opera, but there's little doubt about the first, truly great one — it's Monteverdi's 1607 masterpiece, Orfeo, and it comes to World of Opera from a truly great opera house, Milan's La Scala.

The Root Of All Opera: Monteverdi's 'Orfeo'

Is it possible for one person to invent an entire form of art? It would seem like a tall order by any standard. 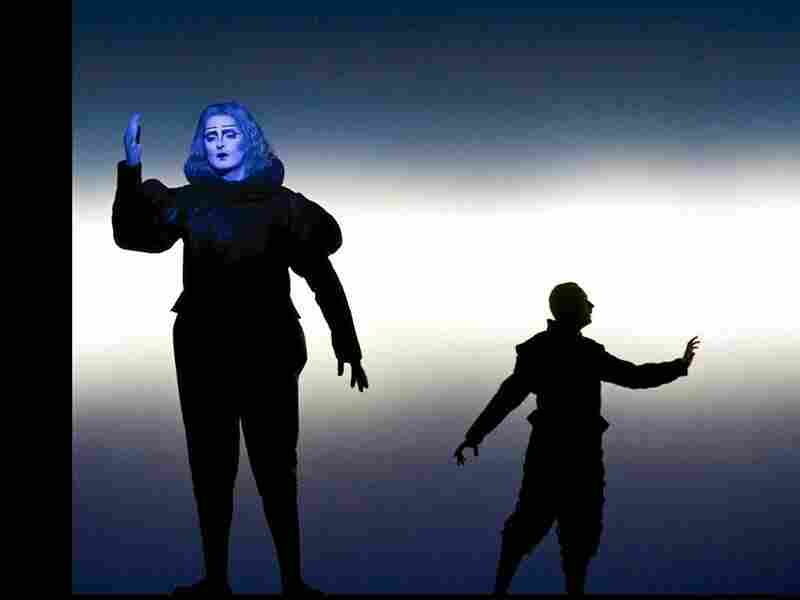 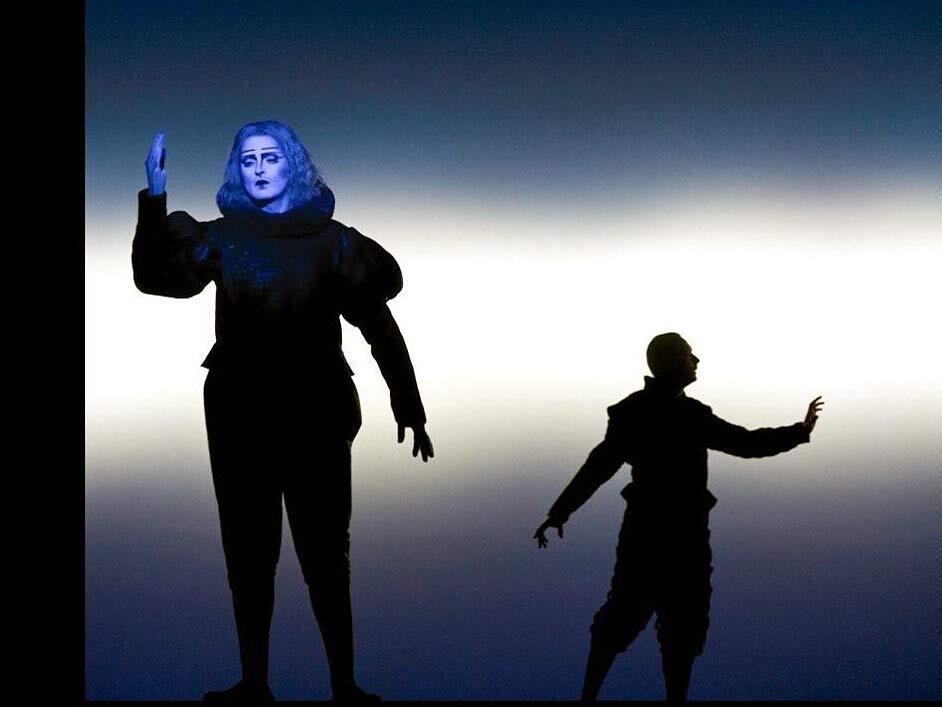 Luigi De Donato (left) plays Caronte, with Georg Nigl as Orfeo, in La Scala's production of the 1607 opera by Monteverdi.

For example, there is cave art as old as 30,000 years -- the earliest paintings ever discovered. But it would be hard to claim that the artists who created them actually invented painting. Surely there were earlier painters whose work simply hasn't survived.

What about music? Courses on the history of western music often start with Gregorian chant -- or even earlier, with the "Delphic Hymns" from ancient Greece. But those are just the earliest examples of music that was written down and preserved, not the earliest music ever created.

Still, there is one composer, Claudio Monteverdi, who often gets credit for inventing opera -- which just may be an art form entirely unto itself. Opera is more than just music combined with storytelling. It's also stagecraft, poetry and even philosophy -- all rolled into one unique form of artistic expression. But, could Monteverdi really have invented it?

Technically, the answer is no. Opera evolved amidst a community of Italian artists in the last years of the 16th century. But nearly all of their earliest works have been lost. The ones that are still around aren't very satisfying, and theyre almost never performed. That is, until you get to Monteverdi's Orfeo, in 1607.

With Orfeo, Monteverdi created the first opera that both survived the centuries and stuck in the repertory -- a work of music and theater that displayed a brand new sort of artistic alchemy. Somehow, it managed to present the straightforward words of its characters, and express the anguished, chaotic emotions behind those words -- both at the same time, and with remarkable clarity and insight. You might call it the first opera that actually "works," and it's still working in opera houses all over the world 400 years after Monteverdi wrote it.

On World of Opera, host Lisa Simeone brings us Monteverdi's Orfeo, arguably the single work from which all other operas are descended, in a production from a company that has premiered many of opera's greatest masterpieces -- Milan's La Scala. Rinaldo Alessandrini is the conductor, with baritone Georg Nigl in the title role and soprano Roberta Invernizzi as Euridice.

The Story of 'Orfeo' 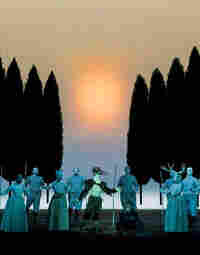 The opera's first two acts are both set in the fields of Thrace. In ACT ONE, Orfeo and Euridice are married in a raucous celebration that includes a chorus of shepherds and nymphs. But as ACT TWO begins, things turn dark. Orfeo is near the woods, with friends, when a messenger brings bad news. Euridice has been bitten by a poisonous snake and is dead. The exchange between the dumbfounded Orfeo and Silvia, the messenger, is an extraordinary musical sequence with wildly contrasting harmonies, portraying Orfeo's refusal to accept reality. His denial is so absolute that as Act Two ends he decides to travel down into the underworld to confront the forces of hell and bring Euridice back.

In ACT THREE, Orfeo ventures into the underworld. At first, he is accompanied by the character representing Hope. But she leaves him to his own devices when they reach the gates of the underworld, and find a sign with the famous words, "Abandon hope all ye who enter."

The gates are also guarded by an intimidating character called Caronte. Orfeo appeals to him in one of the opera's most extraordinary and emotional musical numbers called "Possente spirto" — "Powerful spirit." Orfeo's plaintive lines are echoed by instruments and his pleas are interrupted by longer instrumental passages that reinforce his desperation. Caronte is unmoved, but the music eventually lulls him to sleep, and Orfeo slips past.

As ACT FOUR begins, Orfeo confronts Plutone, Lord of the Underworld. Plutone hesitates to release Euridice, but with some extra persuasion from Plutone's consort, Proserpina, Orfeo wins the day. Plutone says that Orfeo can have Euridice — but only if he leads her out of the underworld without turning back to look at her. Orfeo agrees, but his love is too strong. On their way home Orfeo turns, sees Euridice, and loses her again — this time forever.

Back in Thrace for ACT FIVE, Orfeo is despondent. His lament is one of the opera's most beautiful passages, with a distant echo repeating his phrases, as though in sympathy. The tension is broken when the god Apollo appears. He offers to take Orfeo into heaven, where he can join Euridice among the stars. The shepherds and nymphs do a dance of celebration while Apollo and Orfeo ascend, magically, into the clouds.