Accessibility links
Indian-Chinese Cuisine: Of Spice And Zen Combining the flavors and traditions of these neighboring nations, long a practice in India, is gaining popularity across America. The intriguing hybrids are high in flavor, easy to make — and always leave you wanting more.

Indian-Chinese Cuisine: Of Spice And Zen

Indian-Chinese Cuisine: Of Spice And Zen 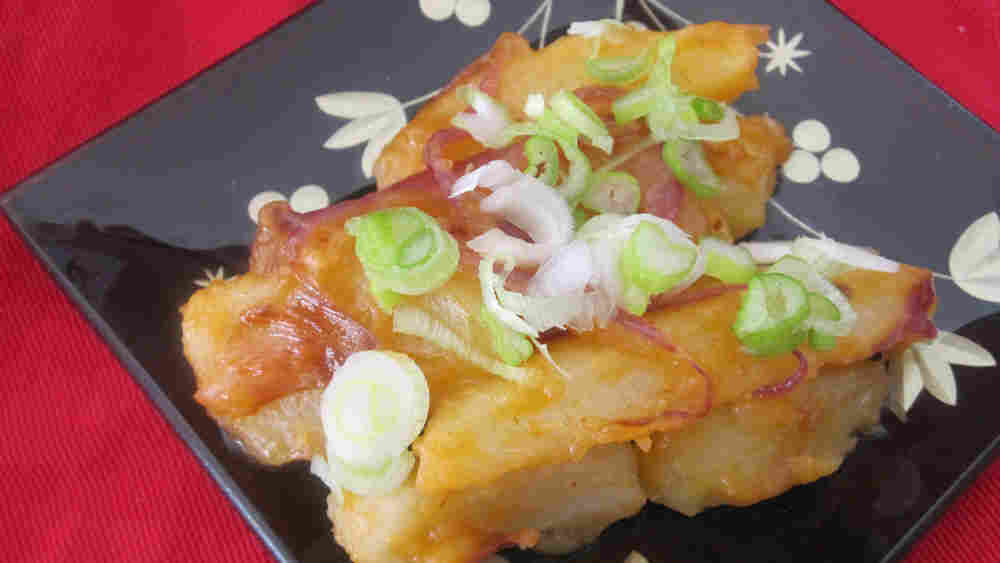 Get recipes for Sizzling Chicken With Ginger, Sichuan Chili Stir-Fried Potatoes (above), Of Rice And Zen and Chef Vinod's Tomato Egg Drop Soup.

If I had to pick my last meal, the dishes would all be Indian-Chinese: chicken Manchurian (batter-fried chicken served in a spicy chili-and-soy sauce), Sichuan paneer (Indian cheese with Chinese spices), Indian-Chinese fried rice, and a dried green chili chicken. These dishes don't come from a cuisine that I dreamed up, but from one very popular in India called Indian-Chinese. It is much spicier than the milder Cantonese Chinese food that most Americans are familiar with. Almost any menu in an everyday eatery in Delhi and Mumbai will list several Indian-Chinese dishes. On our family trips to Mumbai, the first meal we eat out is not traditional Indian, but Indian-Chinese.

Early settlers from southern China ... assimilated into the local culture, and their cooking took on local Indian flavors. The result is a satisfying hybrid cuisine, created from two very different communities and food cultures.

The Chinese have been residents of India for more than two centuries. India's largest Chinese population has historically been in Calcutta, a populous city in eastern India. The Hakka, early settlers from southern China, brought with them the traditional styles of Cantonese and Hakka cooking. They assimilated into the local culture, and their cooking took on local Indian flavors. The result is a satisfying hybrid cuisine, created from two very different communities and food cultures.

An engineer turned food writer, Monica Bhide writes about food and its effect on our lives. Her work has appeared in the Washington Post, the New York Times, Food & Wine, Prevention, Cooking Light, Health and Self. Her latest book is Modern Spice: Inspired Indian Flavors for the Contemporary Kitchen (Simon & Schuster). Read more at her blog, A Life Of Spice.

The intriguing combination of Indian ingredients such as garam masala (warm spice mix), cilantro and tamarind with Chinese soy sauce, ginger, garlic and even ketchup produces dishes that are high in flavor, easy to make and always leave you wanting more.

One of the most commonly used cooking techniques in this cuisine is deep-frying. Typically an ingredient such as paneer (firm-textured Indian cheese), chicken, fish or a vegetable is coated with a cornstarch batter and then deep-fried. Then it is tossed with ingredients such as red or green chilies, soy sauce and vinegar.

"I grew up eating it, and then even trained in the cuisine at the Mandarin House in Delhi," he said. The cuisine uses many other techniques in addition to deep-frying, he said. High-heat stir-frying, sauteing and steaming are the most popular.

"When I used to cook this cuisine in India, I remember the most popular dishes used to be Indian-Chinese soups garnished with chili vinegar, and sweet-and-sour dishes prepared with equal amounts of sugar and vinegar," he said.

This hybrid style of cooking, neither truly Indian nor Chinese, is gaining in popularity in the U.S. Indian-Chinese restaurants are starting to sprout up — Ming in Edison, N.J., Masala Wok in Virginia and Texas, Hot Wok Village in Chicago.

Is it still as popular back in India? Antoine Lewis, an Indian food writer and owner of the now-closed Indian-Chinese restaurant The Sizzling Wok in Mumbai, says, "A beggar child on the streets of Mumbai I once gave leftover food to opened the container and told me he wanted it only if it was Indian-Chinese."

The mint adds a glorious note to this spicy chicken dish. This dish reheats better in a skillet than in the microwave. The original recipe also includes baby corn and bell peppers along with the mushrooms. It is adapted from Best of Chinese Cooking by Sanjeev Kapoor (Popular Prakashan 2003). 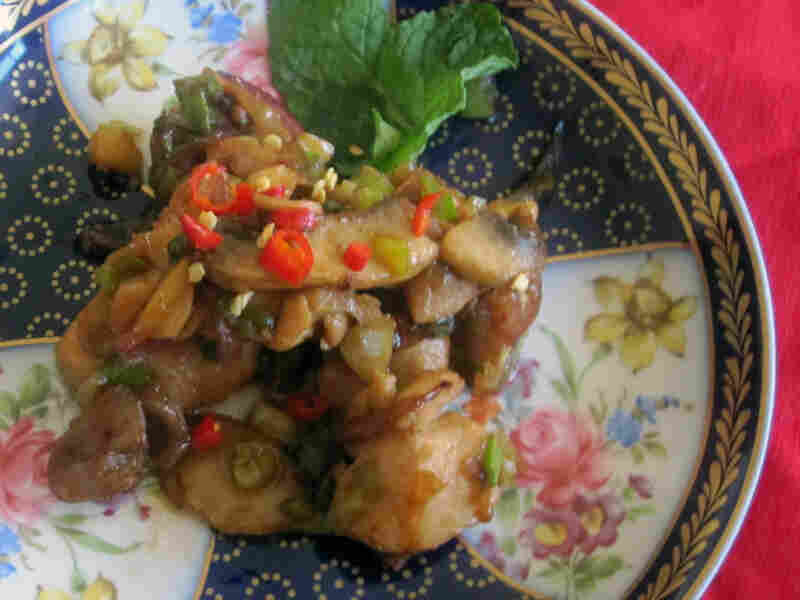 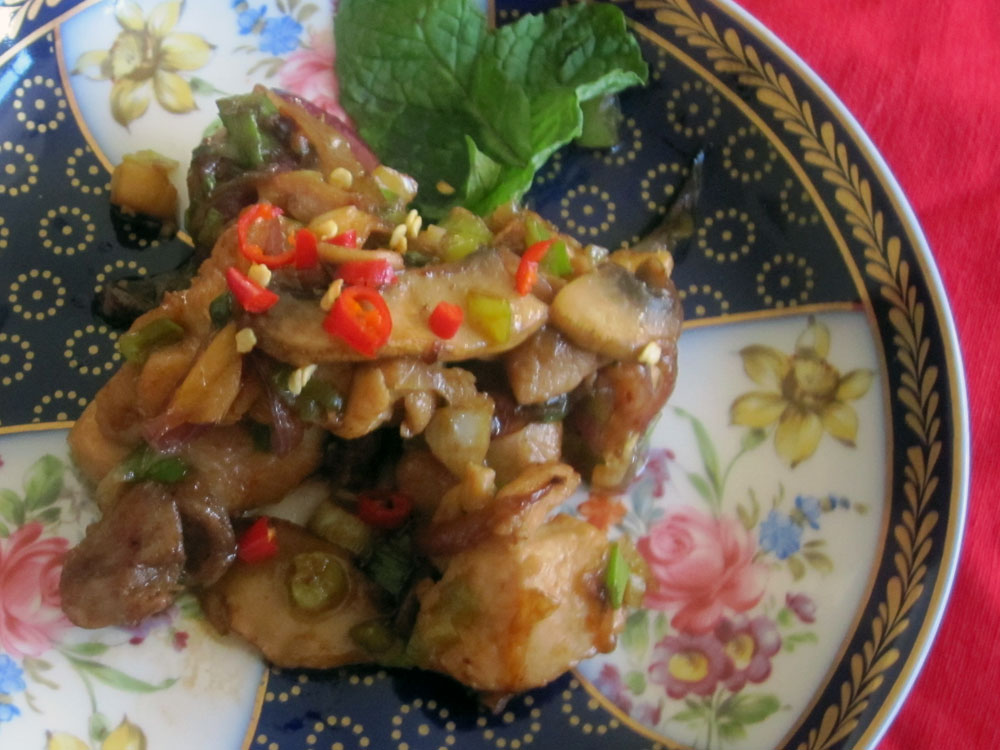 Heat the vegetable oil in a large skillet over high heat. Add the onion and saute until translucent.

Add the garlic and saute for 1 minute. Remove the onion and garlic from the pan and set aside.

Add the chicken pieces to the oil in the skillet and saute for 2 to 3 minutes, until lightly browned. Add the soy sauce, ginger and 5 of the mint leaves. Stir well.

Add the mushroom, scallions, chili and sauteed onion and garlic, and cook, stirring continuously, until the chicken is cooked through and tender.

Stir in the rice vinegar, sugar and fish sauce.

Garnish with remaining mint leaves and serve hot with rice.

Use Yukon gold potatoes for best results. I have used this many times as a filling for Indian-style sandwiches. The original recipe calls for deep-frying the potatoes after boiling them. I have avoided that step here, but the taste is still wonderful. The recipe is adapted from Best of Chinese Cooking by Sanjeev Kapoor (Popular Prakashan 2003). 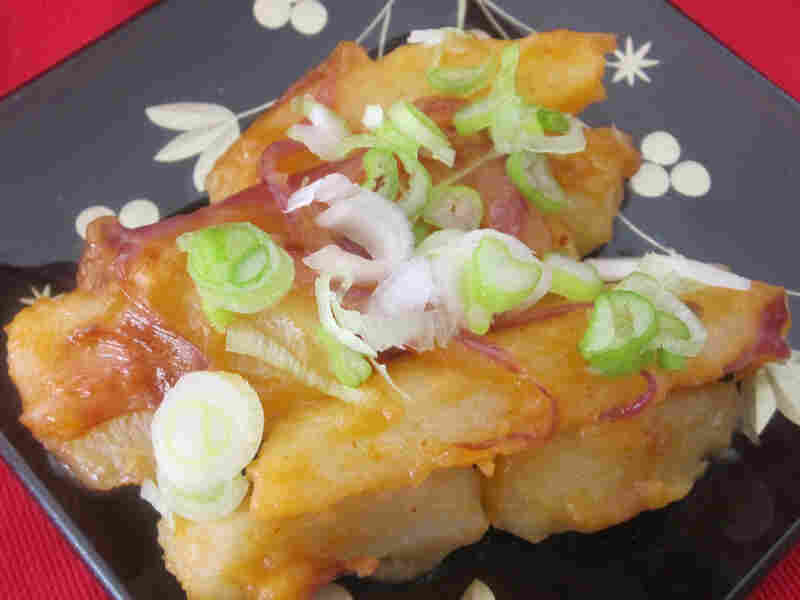 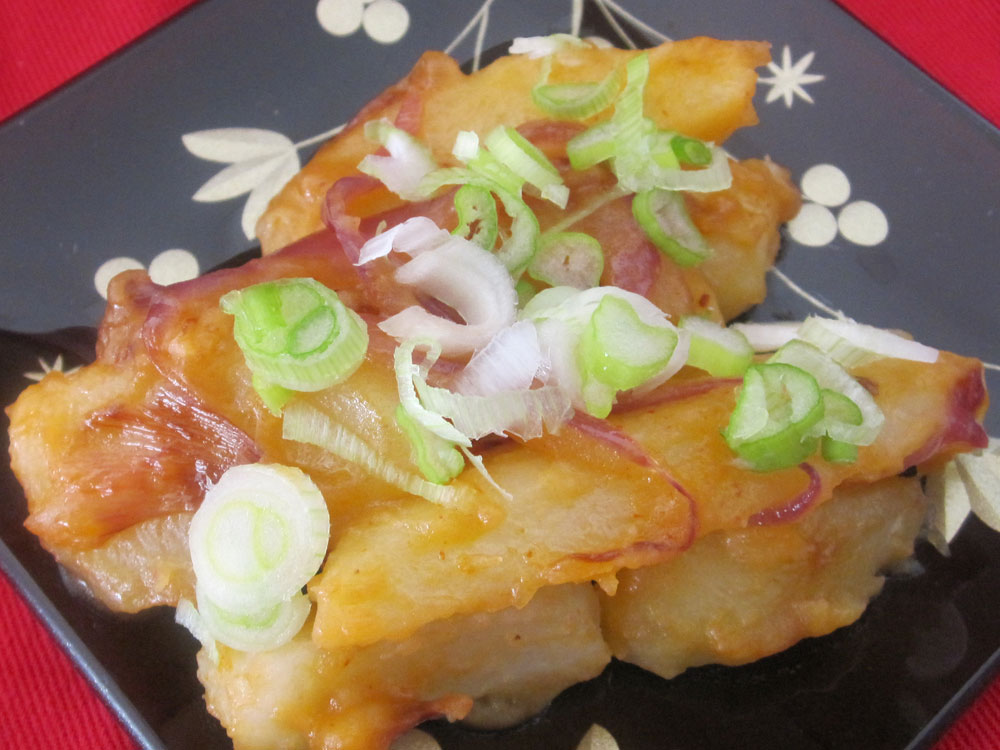 Bring lightly salted water to a boil in a saucepan.

Peel and cut each potato into 8 to 12 wedges each. Boil the potatoes until almost done. When you poke them with the point of a knife, there should still be a little resistance. Drain and set aside.

Heat the oil in a wok or skillet over high heat. Add the garlic and saute until lightly browned. Add the onion and saute until it has softened slightly. Stir in the chili flakes and red chili paste, if using. Add the potato wedges and toss well. Add the soy sauce, sugar and peppercorns, and toss again.

Blend the cornstarch with the vegetable stock and gently mix into the potatoes. Cook until the sauce has thickened. Adjust the salt to taste.

Of Rice And Zen

This recipe uses previously cooked plain basmati rice, which really does need to be cold for this stir-fry. So if you want to make this dish, make the rice the day before and let it sit in the refrigerator overnight. You can also make this dish without the chicken, or substitute cooked pork, beef or diced tofu. Adapted from Modern Spice by Monica Bhide (Simon & Schuster 2009). 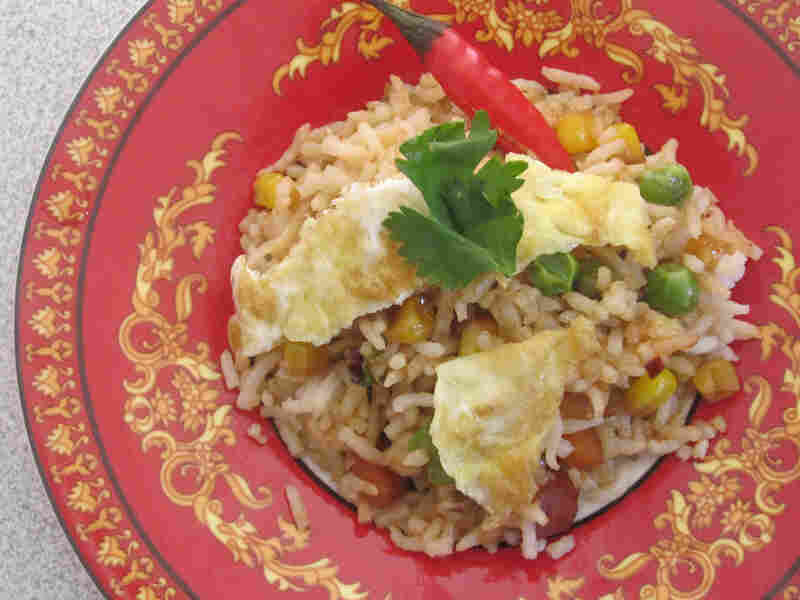 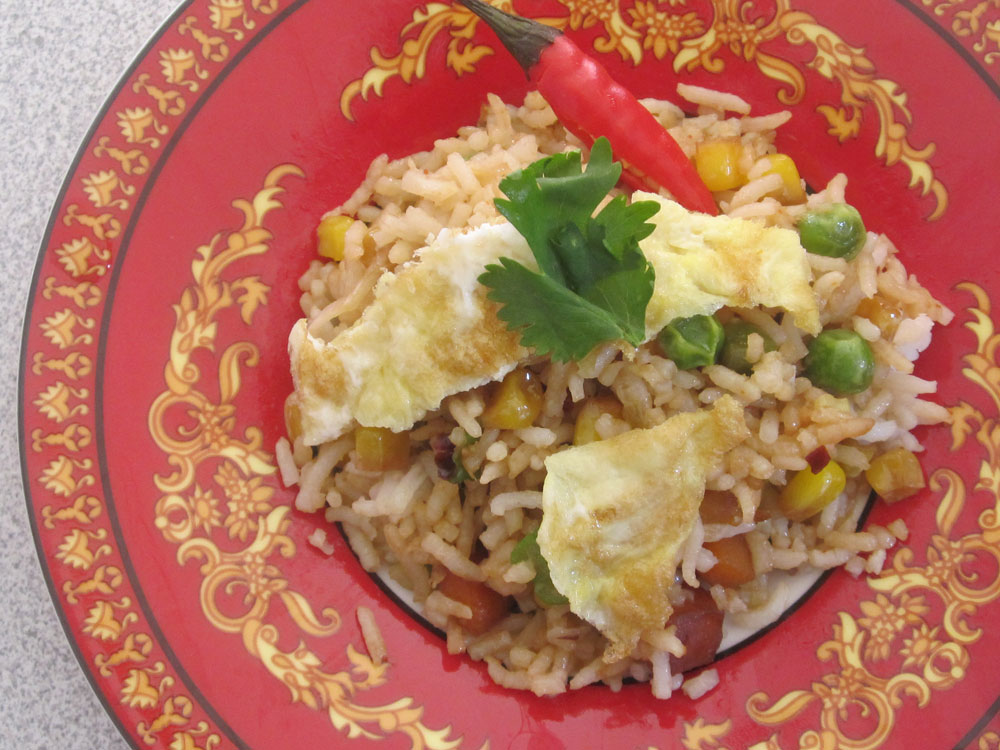 Cook the frozen vegetables in the microwave according to directions on the package. Drain and set aside.

Meanwhile, in a large nonstick skillet, heat the vegetable oil over medium heat. When the oil shimmers, pour in the egg and rotate the pan to spread it thin. Cook until set on both sides but not browned. Transfer to a plate and cut into thin strips.

Raise the heat to high. Add the ginger, garlic, cloves, cinnamon stick, cardamom and mixed vegetables. Saute for about 1 minute, until fragrant. Add the soy sauce, vinegar and chili flakes, and mix well. Add the scallions and chicken, and saute for another 2 minutes or until the chicken is completely heated through.

Add the rice and mix well. Saute for 2 to 3 minutes, until the rice is completely heated through.

Serve hot, topped with the egg strips and cilantro.

I watched Chef K.N. Vinod of Indique Heights restaurant in Chevy Chase, Md., as he whipped up this delicious soup in no time at all. The simplicity of the soup is its charm. You can see the Indian influences of green chilies and cilantro. The quality of this soup depends on using a good quality stock, and also ripe and red tomatoes. 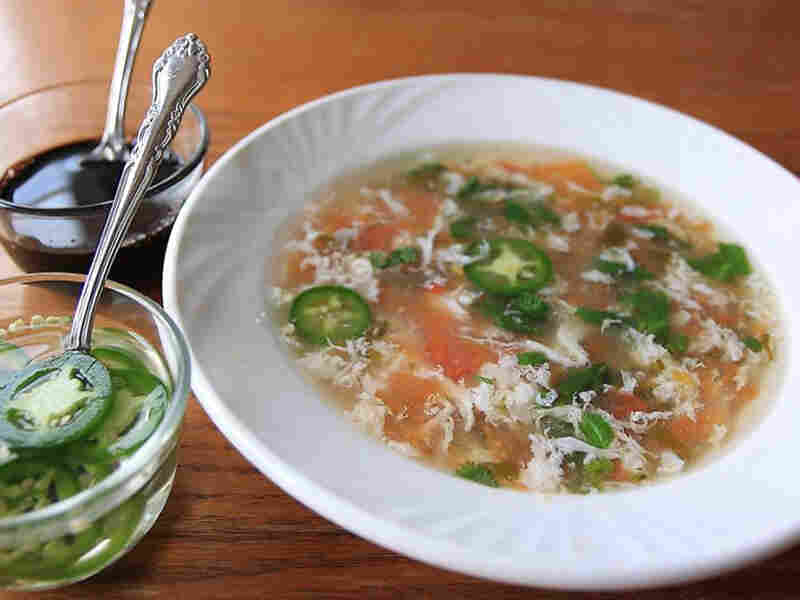 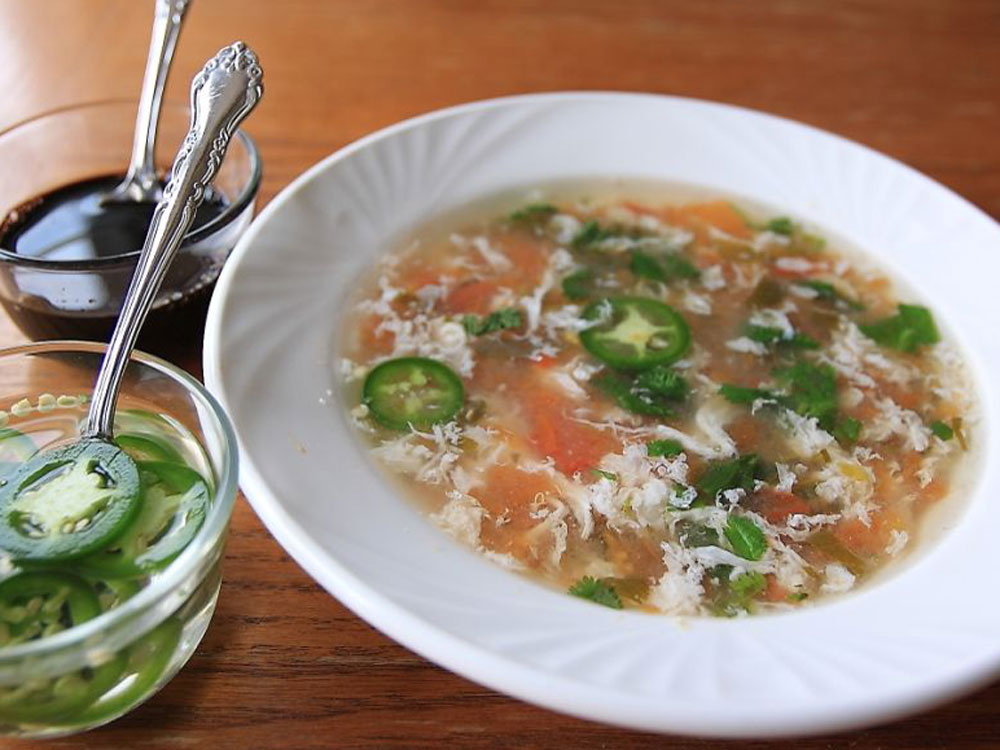 1/4 teaspoon white pepper, or to taste

In a deep saucepan, bring the chicken stock to a boil. If any scum forms on top, gently remove it.

Add the tomatoes and boil for 5 to 7 minutes.

Very slowly pour egg whites into the soup in a steady stream.

Gently stir the eggs in a clockwise direction until they form thin streams or ribbons.

Our Insatiable Appetite For Cookbooks Dec. 3, 2009