Accessibility links
Haiti's Buildings Weren't Fit To Withstand Quakes The magnitude 7.0 earthquake struck a country whose buildings were barely built to engineering standards and were hopelessly fragile in the grip of such a strong quake. Haiti has no national building code, and many structures may not have been sound to begin with. 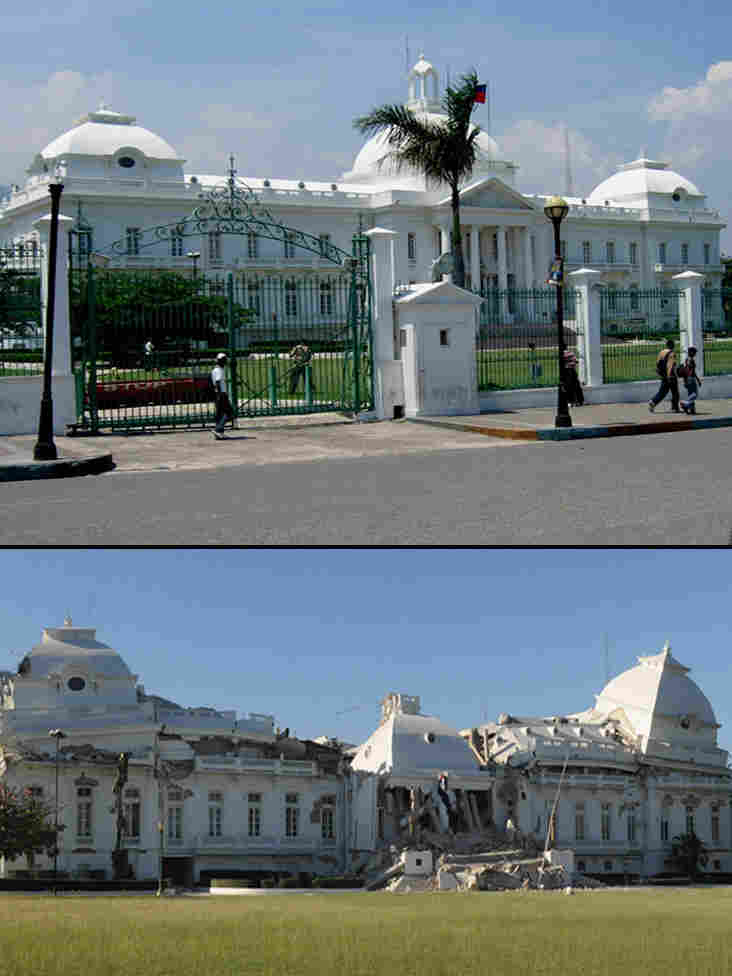 Haiti's magnitude 7.0 earthquake struck a country whose buildings were barely built to engineering standards and were hopelessly fragile in the grip of such a strong quake.

Fouche says when he was studying engineering in Haiti his professors told him that at least one building there would survive an earthquake — the presidential residence known as the National Palace.

The palace now lies in ruins.

Fouche is now getting his doctorate in earthquake engineering at the University of Buffalo. He says his family has survived Tuesday's quake, but he's saddened by the fact that so many who didn't were killed because buildings in Haiti are so poorly constructed.

"Many people are doing whatever they want; they can build whatever they want," Fouche says. "One of the biggest problems too is that in the country we do not even have a national building code, which is very sad."

Fouche says people with money can build reinforced concrete buildings with steel rods to strengthen walls and floors. But he says even these may not meet engineering standards to support a load vertically, and they definitely cannot handle the side-to-side forces of an earthquake.

"The earthquake, it's much more of a type of lateral loading, [and] for lateral loading you need special construction, but in many cases they are not designed, not even for current daily loading."

But many people in Haiti live and work in unreinforced buildings — brick, block or concrete. He says some of these buildings use stacked bricks instead of solid vertical columns to support ceilings.

Earthquakes put enormous stress on rigid buildings. Andre Filiatrault, who directs the earthquake engineering center at the University of Buffalo, explains what happens to a masonry or concrete wall that's perpendicular to the motion of the quake: "The wall just kind of explodes. Imagine that I hit a wall with my fist; I'm going to create a hole there, and imagine [that] the shaking in that direction will create even a bigger hole and the wall collapses and the slab falls down." The slab being the wall or ceiling.

Filiatraut says televised images of Port-au-Prince suggest this kind of collapse was widespread. "The video showed complete dust over the entire city. Apparently that dust lasted quite a long time, 10, 15 minutes or so, and that seems to indicate these types of buildings, concrete buildings, pancaking, creating a lot of dust."

Several big aftershocks followed the earthquake. Fouche says that makes the surviving buildings very dangerous. "Once you have the aftershock," he says, "it's like you are shaking a building that is already damaged, so this is quite likely to bring those buildings down."

After The Quake, Threat Of Landslides Looms

There's another threat to buildings and people in Haiti as well — quake-induced landslides. Haiti has very few trees left; it's one of the most deforested nations in the hemisphere.

Mark Ashton, a professor at the Yale School of Forestry who has studied the Caribbean, says that without woody plants, water doesn't soak deeply into the soil. That causes erosion and unstable slopes. "You can get rain-soaked soil, very fragile, without any rooting system, and you get very sudden movements — landslides."

Ashton says Haiti is a country with lots of steep slopes that are vulnerable to landslides. Besides the threat to people below, they could cover roads and slow down rescue and relief efforts.