Accessibility links
As Haiti Bleeds, Aid Stalled By Obstacles As many as 50,000 people perished in the earthquake that struck Haiti on Tuesday, according to the Haitian Red Cross. Logistical problems hamper efforts to get aid to the 3 million or so survivors who are estimated to need emergency assistance. President Obama authorized $100 million in emergency aid for Haiti.

As many as 50,000 people perished in the earthquake that struck Haiti, according to a new estimate from the Haitian Red Cross, even as aid groups struggled to meet the overwhelming needs of the increasingly desperate survivors.

Planeloads of search-and-rescue teams, medics and supplies were trickling into the devastated capital of Port-au-Prince, but the aid pipeline remains agonizingly slow. U.S. officials said Thursday that they had to suspend all civilian flights from the United States to Haiti for several hours because there was not enough room on the ground for more planes and limited jet fuel for planes to fly back. Aid flights have resumed, but other charter flights remained on hold.

President Obama said Thursday that the U.S. government was launching "one of the largest relief efforts in our recent history" to help the stricken country, but that it would take "hours, and in many cases, days" to get the aid there. As many as 5,500 U.S. infantry soldiers and Marines will be in the Caribbean nation or in ships offshore by Monday, and Obama authorized $100 million in emergency aid for Haiti. A source has told NPR's Don Gonyea that former President George W. Bush will join former President Bill Clinton in a Haiti relief fundraising effort.

Heard 'On All Things Considered'

But in Port-au-Prince, there were few apparent signs so far of an organized plan to bring food and water to the 3 million or so Haitians that the International Red Cross estimates need emergency assistance.

"There is no government aid out here bringing anything to the people," said NPR's Carrie Kahn, reporting from Port-au-Prince. "They've been three days now without food and water."

Kahn said survivors were wandering the streets in desperate search of water, food and medical care. "You go into every building, you go down every corner, and there are people wailing, crying, bandaged up, and there are no doctors to help them," she said.

Kahn visited one clinic packed with several dozen patients lying on mattresses on the floor, many of them bleeding and moaning, but there were no doctors in sight. One 8-year-old girl lost her whole family — 11 people — in the quake.

NPR's Jason Beaubien, who drove into Haiti from the neighboring Dominican Republic, said he saw increasing signs of destruction as he neared Port-au-Prince. "You start to see it about 20 miles out from the capital," he said. "It gets more and more intense the closer you get to the center of the city."

Death Toll: Haiti's Red Cross estimated that 45,000 to 50,00 people may have been killed in Tuesday's earthquake. U.N. officials said at least 36 employees were killed after the agency's headquarters building fell in Port-au-Prince.

Relief Supplies: In Port-au-Prince, there are few apparent signs of an organized plan to distribute food and water, both of which are in very short supply.

Infrastructure: The capital's port is too heavily damaged to receive aid deliveries, and the airport is straining to handle dozens of incoming flights of rescue teams and supplies.

Beaubien said that, judging from the state of the road, it seemed unlikely that it would be an option to truck supplies into Haiti from the Dominican side.

Witnesses say there's been little sign of security forces in the capital. Survivor Pierre Brisson told NPR's Melissa Block that he has seen a few police and U.N. peacekeeping patrols, but that the city is calm, for the most part. "It seems that we are still stunned by what happened," he said. "I am afraid of the reaction as time goes by, when needs will be greater and despair will set in."

At least eight of Port-au-Prince's hospitals have been heavily damaged. The aid group Doctors Without Borders treated the wounded at two hospitals that withstood the quake and set up tent clinics elsewhere to replace its damaged facilities. Many of the hundreds of Cuban doctors stationed in Haiti also worked to treat the injured in field hospitals.

"This is much worse than a hurricane," said Jimitre Coquillon, a doctor's assistant who was working at a separate makeshift triage center set up in a hotel parking lot. "There's no water. There's nothing. Thirsty people are going to die."

But aid will most likely be slow to arrive. Deliveries of supplies by ship to Port-au-Prince were impossible because the capital's port was so badly damaged, according to United Nations officials. The city's airport is open but straining to handle dozens of incoming flights of supplies and rescuers.

Meanwhile, bodies were strewn on almost every street. The body of one mother was covered with the corpses of her children.

"People have nowhere to put them, so they wrap them in sheets and cardboards in the hope that the authorities will pick them [up]. People have also piled bodies in front of the city's main hospitals," Cedric Perus, the humanitarian coordinator in Haiti for Oxfam, an international aid group, said in a statement from Port-au-Prince. "Bodies may stay under the rubble for a long time because it is difficult to access some sites and heavy-lifting equipment is in limited supply."

There was still no concrete estimate of how many people were killed by Tuesday's magnitude 7.0 quake. Haiti's Red Cross on Thursday suggested the toll could reach between 45,000 and 50,000 people.

One American was confirmed dead, a veteran Foreign Service officer, Victoria DeLong, killed in her collapsed home. A State Department official said that at least 164 U.S. citizens have been evacuated. Hundreds more are awaiting flights out.

There's no water. There's nothing. Thirsty people are going to die.

Jimitre Coquillon, a doctor's assistant at a makeshift triage center

Obama promised an all-out rescue and humanitarian effort including military and civilian emergency teams from across the U.S. The aircraft carrier USS Carl Vinson was expected to arrive off the coast Friday, and the Navy said the amphibious assault ship USS Bataan had been ordered to sail as soon as possible with a 2,000-member Marine unit. An advance group of more than 100 soldiers from the 82nd Airborne Division will leave Fort Bragg in North Carolina on Thursday to prepare for the arrival of about 3,500 more from the division by Sunday.

Speaking directly to Haitians, Obama said, "You will not be forsaken."

A U.S. military assessment team was the first to arrive, to determine Haiti's needs.

"We are going to do everything we can to maintain order," Secretary of State Hillary Clinton told CNN.

The United Nations released $10 million from its emergency funds, even as U.N. forces in Haiti struggled with their own losses. The U.N. headquarters building collapsed in Port-au-Prince, and at least 36 people were confirmed dead, with nearly 200 still missing, including mission director Hedi Annabi of Tunisia and his chief deputy, Luis Carlos da Costa. 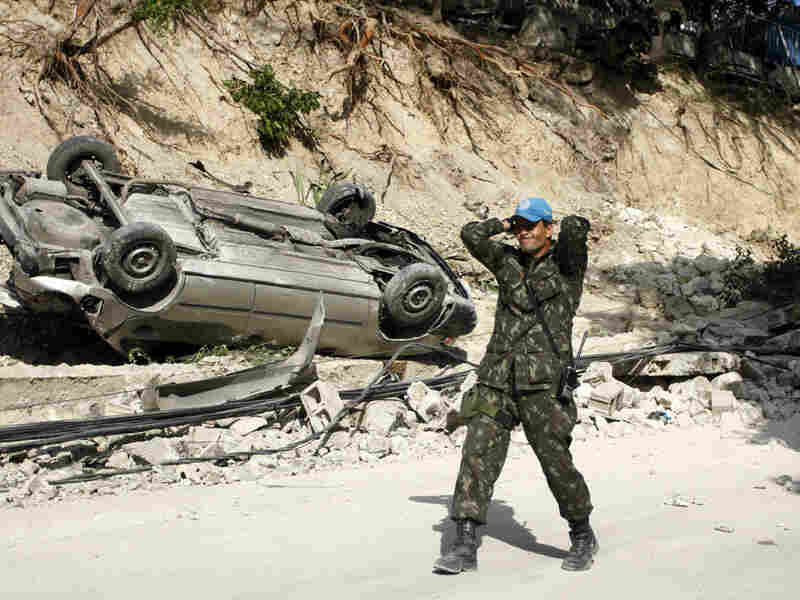 A U.N. soldier walks along a street a day after it was destroyed by the massive magnitude 7.0 earthquake Tuesday in Port-au-Prince. Erika Santelices/AFP/Getty Images hide caption

"We'll be using whatever roads are passable to get aid to Port-au-Prince, and if possible we'll bring helicopters in," said Emilia Casella, a spokeswoman for the U.N. food agency in Geneva.

Doctors stitched up head wounds on several children at a hotel compound where many survivors gathered for the night. "It was just excruciating to hear them screaming out in pain, calling out to their parents for help," reported NPR's Kahn. "You hear moans throughout the night."

At another site, about 200 survivors, including many children, huddled in a theater parking lot using sheets to rig makeshift tents.

Police officers carried the injured in their pickup trucks. Wisnel Occilus, a 24-year-old student, was wedged between two other survivors in the bed of a truck headed to a police station. He was in an English class when the quake struck at 4:53 p.m. and the building collapsed.

"The professor is dead. Some of the students are dead, too," said Occilus, who suspected he had several broken bones. "Everything hurts."

Around the city, ad hoc medical centers sprang up, including one at the airport where U.N. workers, foreigners and Haitians were being frantically treated.

Hundreds of patients were lined up in cot after cot in covered hangars, NPR's Kahn reported. One man arrived in a wheelbarrow; another made it after being trapped in rubble for 16 hours.

Doctors who arrived from Miami on Wednesday evening hustled to treat the injuries, which included broken limbs, spinal damage and internal bleeding. In the space of just a few hours, at least four people died of relatively minor injuries that doctors said would have been treated easily in a more advanced facility.

But calls from other victims seeking help from emergency services weren't getting through because systems that connect different phone networks were not working, according to officials from a telecommunications provider in Haiti.

Calls were being placed sometimes 15 to 20 times from the same phone, which was "painful to watch," said Jyoti Mahurkar-Thombre, Alcatel-Lucent's general manager of wireless voice.

Looting began immediately after the quake, with people seen carrying food from collapsed buildings, but aid workers say disturbances were rare. Inmates also were reported to have escaped from the damaged main prison in Port-au-Prince, said Elisabeth Byrs, a U.N. humanitarian spokeswoman in Geneva.

The quake brought down Port-au-Prince's gleaming white National Palace and other government buildings, disabling much of the national leadership. That vacuum was evident Thursday. No senior Haitian government officials were visible at the airport, although President Leonel Fernandez of the Dominican Republic said after meeting with President Rene Preval that the Haitian leader was in control of the situation, working from the airport.

David Wimhurst, spokesman for the U.N. peacekeeping mission, said the Haitian police "are not visible at all," no doubt because many had to deal with lost homes and family members, and law-and-order needs had fallen completely to the 9,000 U.N. peacekeepers and international police in Haiti.

NPR's Corey Flintoff contributed to this report, which also includes material from The Associated Press.