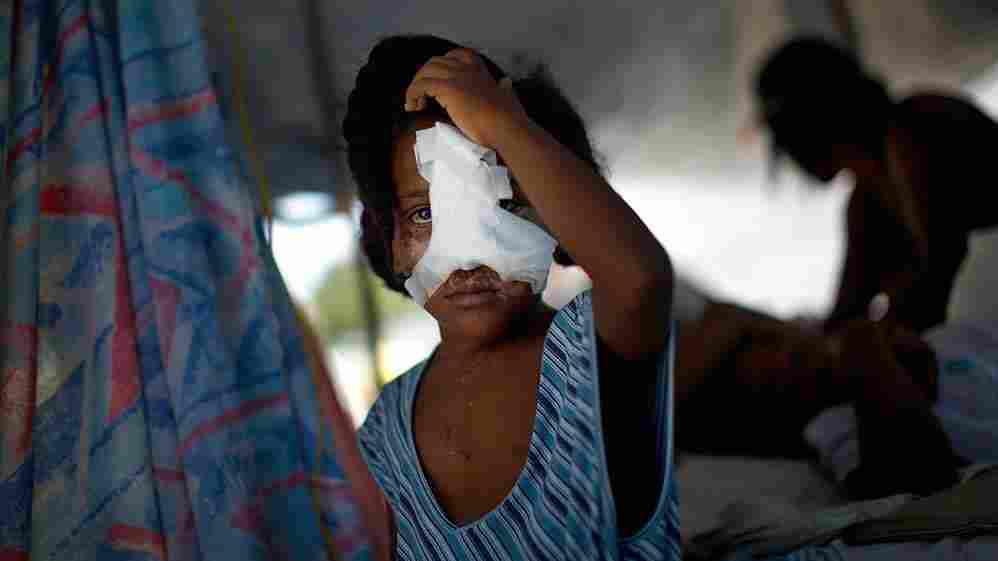 A young girl, whose nose and cheeks were shattered in the earthquake, holds her head at the main hospital in downtown Port-au-Prince. David Gilkey/NPR hide caption 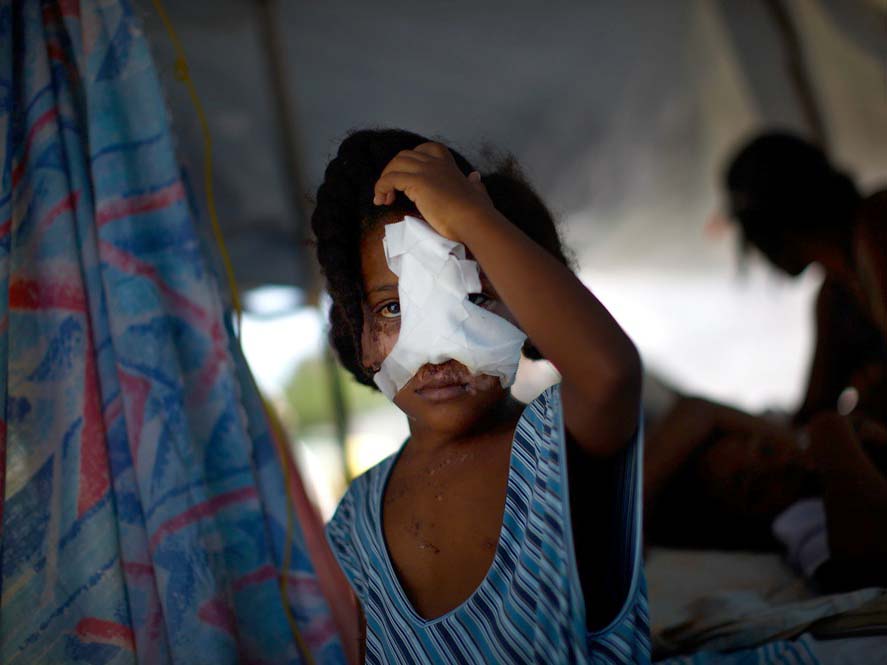 A young girl, whose nose and cheeks were shattered in the earthquake, holds her head at the main hospital in downtown Port-au-Prince.

Our top story today, the unfolding humanitarian crisis in Haiti. It's been two days since a devastating earthquake hit the country's capital, Port-au-Prince. The Red Cross estimates the death toll at 45,000 to 50,000. Haiti's president, Rene Preval, said 7,000 bodies have already been buried in a mass grave. Thousands more people are injured. President Obama today pledged $100 million for immediate relief to Haiti and he said we stand in solidarity with our neighbors to the south.

SIEGEL: But help has only begun to work its way into the country and the window for rescuing those still trapped in the rubble is slowly closing.

BLOCK: NPR's Jason Beaubien joins us from Port-au-Prince. Jason, describe where you are right now, please, and what you're seeing.

JASON BEAUBIEN: Right now I'm outside the Villa Creole Hotel, which is in the Petionville neighborhood an elite neighborhood of Port-au-Prince. And it's really quite amazing, people have brought their injured children out front here because they know that there are medical - Western medical doctors staying inside. So, people have come here to try to get attention for - mainly for their children. There's a girl - I'm sorry. There's a girl right in front of me at the moment. She's covered in bandages. She's laying on just some what are they they're from the deck chairs that would be by the pool. She's naked except for what looks like a tablecloth on top of her. And she keeps lifting her head and her lips are shaking.

BEAUBIEN: It's heartbreaking what's happening here. And there are people just in the streets everywhere. When you drive through, there are tent cities that have been sort of set up just in little lots. People are clearly just living wherever they can.

BLOCK: Jason, the girl you just described, is she getting any medical attention there?

BLOCK: Does the girl have any family there with her, do you know?

BEAUBIEN: I assume that she has family here, but it's really quite striking. She's lying out in what would just normally be the driveway and there's no one around her.

BLOCK: Jason, you came into Haiti over land by car from the Dominican Republic. Can you describe that journey, what you saw as you crossed the border and came - made your way into Haiti?

BEAUBIEN: What is really striking is the drive in just shows how distant the Dominican Republic is from Haiti. These are countries that are not incredibly linked. The border - the road going to the border is terrible. At times it turns into just a rutted dirt road. This is the main road linking Port-au-Prince to Santiago in the Dominican Republic. There is no activity really going on there at all. There's no aid trucks. You weren't seeing refugees. You weren't seeing anything, really, going on out there. There was pretty much nothing.

BLOCK: So, somehow they had managed to make their way all the way to the border with the Dominican Republic to get medical help.

BEAUBIEN: It's true. And to some degree that's an indication of just how desperate people are to get out of the capital, which is just in shambles, really. You start to see it about 20 miles out from the capital. You start to see a few buildings that have knocked down and it gets more and more intense the closer you get to the center of the city. It's almost as if and the epicenter was not right underneath Port-au-Prince, but that's how it feels when you drive in. You can just see it get more and more destruction, more buildings that have fallen in, more chaos the closer you get to the heart of Port-au-Prince.

BLOCK: And, Jason, what you're describing with the roads obviously poses a huge problem for getting assistance in. The port is terribly damaged and apparently is pretty much unusable. There's a bottleneck of relief coming in at the airport. And you're saying by road that's really not a viable option either.

BLOCK: Jason, what about aftershocks? Are they still - are you still experiencing aftershocks now?

BEAUBIEN: Yes. They've been continuing as recently as an hour ago and about hour and a half before that. Yeah, the aftershocks are continuing.

BLOCK: NPR's Jason Beaubien speaking with us from Port-au-Prince. Jason, thank you.