Accessibility links
A Behind-The-Scenes Look At NPR's '50 Great Voices' Over the next year, we'll reveal profiles of 50 singers who've made their mark internationally and across recorded history. But first, here's an explanation of how we arrived at the 50 who will make the list. 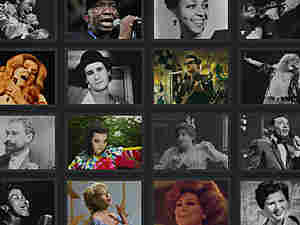 On Monday, we launch a new series on NPR called 50 Great Voices. Over the next year, we'll hear profiles of 50 singers who've made their mark internationally and across recorded history. But first, we'd like to explain how we arrived at the 50 who made the list.

First, you probably just want to know who they are. We'll be revealing the list throughout 2010 with a new artist profiled weekly. Some of the 50 Great Voices are icons who were popular with both our panelists and the NPR audience. But coming up with just 50 great voices wasn't easy.

1. An on-air and online solicitation to the NPR audience.

"People went crazy," says Frannie Kelley, an editor at NPR Music who kept track of the submissions to the NPR Web site. "Over 100,000 people said, 'This person,' 'This person,' 'Don't forget about this person.' "

The NPR audience first nominated voices to be considered for the series, and then used our online interactive roundup to hear music from many of the names submitted by both the audience and a panel of experts. They could then vote for their favorites.

Among the audience's most nominated performers were superstars such as Josh Groban, as well as superstars of other eras, like Frank Sinatra. But — and here's where you might get really angry — neither Sinatra nor Groban are among the 50 Great Voices we selected.

2. A feisty conference call with panelists.

Matters of taste vary, to say the least, and the 50 Great Voices panel did not agree on everything. After coming up with a massive list of singers, the elimination round began with a feisty conference call. One lightning rod was Freddie Mercury, lead singer of Queen. His voice prompted an interesting exchange between panelists Tim Page, Tom Huizenga, Tom Moon and Murray Horwitz. And there were other heated moments.

"No one really needs to make the case that Frank Sinatra has a great voice," says Oliver Wang, a music writer who was on our panel of experts. "If you asked, 'Who are the Top 10 voices in American history?' Frank is automatic. You just know it impulsively, because that's been so hammered into us, but what this project should do is look at artists who are great, but not as recognizable or as obvious a choice as Frank."

In other words, discovery is a major part of this series. But this might still disappoint some people. The music we love is so important to us that when our favorites aren't included, we get upset. Myself included. Even the CEO of NPR, Vivian Schiller, came by my desk and asked, "Is k.d. lang on the list?"

She looked a little crestfallen when I said no. Now, of course, k.d. lang is a great singer beloved by millions. But, for the sake of discovery, we decided to spotlight Kitty Wells, considered the first woman to become a country-music star. In her day, recording technology wasn't what it is today.

In the very big world of music, discovery is a tricky thing. Included in the 50 Great Voices are singers who are powerhouses within a genre, but not in the mainstream. Take classical.

"I take the idea that even though people like Maria Callas are on the list — a superstar — she's still going to be a discovery for most people," panelist Tom Huizenga says.

The bedrock of 50 Great Voices is the emphasis on singers from abroad. We wanted to find out who are the Frank Sinatras and Aretha Franklins in other countries. And many of those we'll hear about were nominated by both panelists and the NPR audience.

Alex Pamfilio of New York, N.Y. nominated Brazilian singer Elis Regina "because her technique is perfect." Marc Meisnere from Washington, D.C. nominated Jamaican singer Dennis Brown "for his tone and the way he combines American R&B with Jamaican music." And from Florida, James Jondahl selected Lebanese singer Fairuz because she's "the most important living singer in the Arab world," he says.

Whenever you come up with any kind of list, whether it's great athletes or great artists, there's bound to be controversy. As one panelist put it, the 50 Great Voices series will both please and infuriate. And that's partly the point.