Americans across the U.S. are celebrating Martin Luther King Jr.'s legacy with a day of service. We reflect on his life and message by revisiting his celebrated I Have a Dream speech in its entirety. 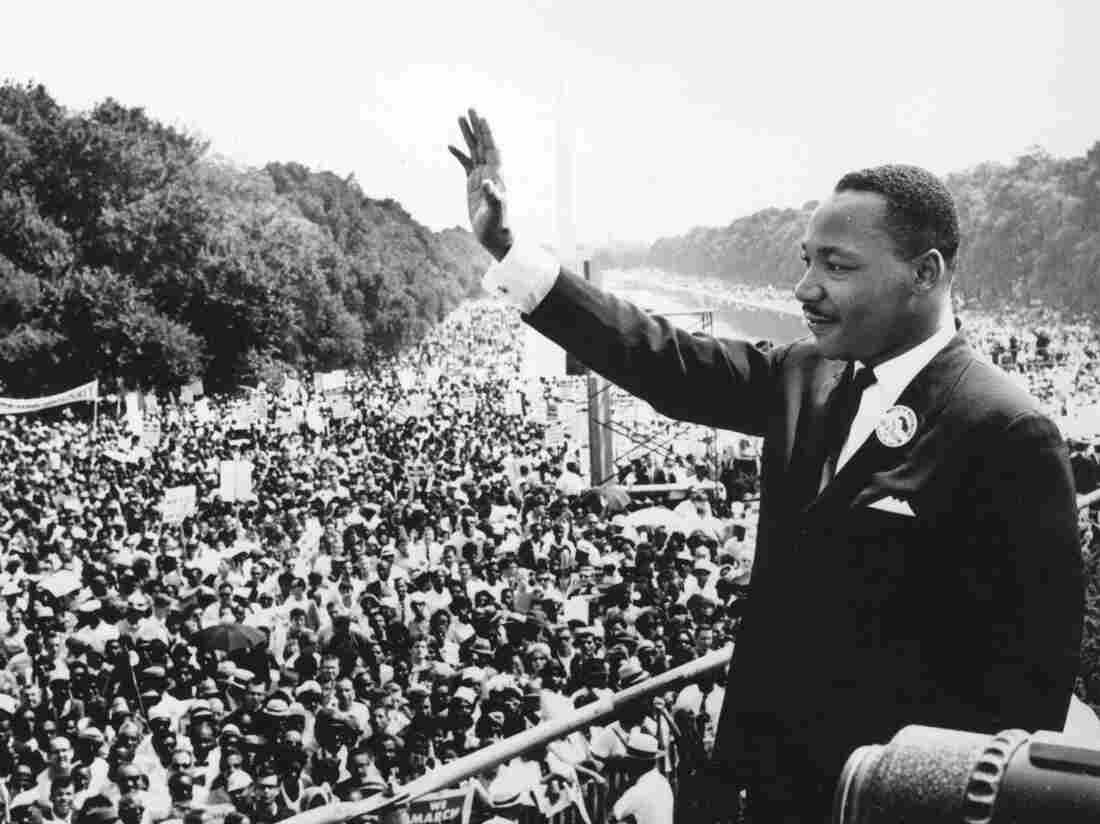 Black American civil rights leader Martin Luther King (1929 - 1968) addresses crowds during the March On Washington at the Lincoln Memorial, Washington DC, where he gave his 'I Have A Dream' speech. Agence France Presse/Getty Images hide caption 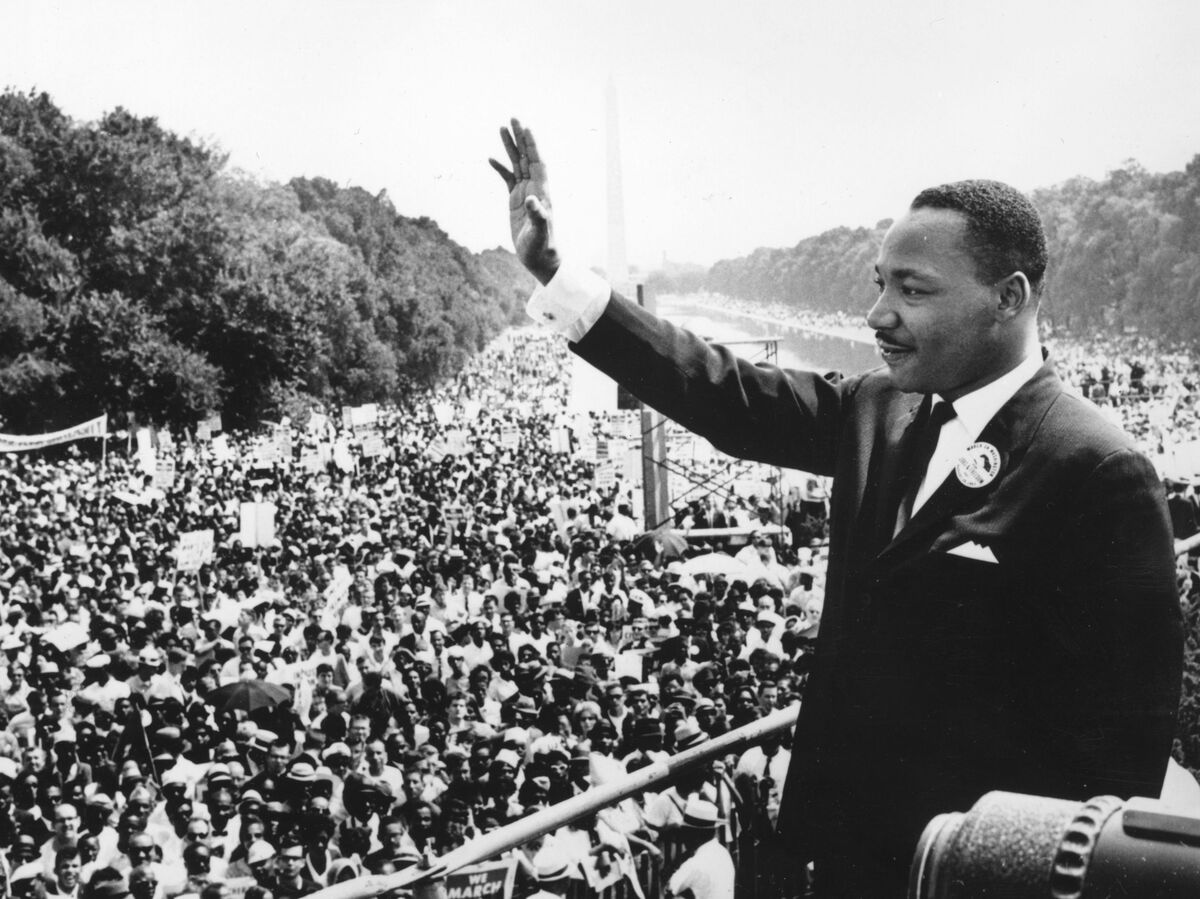 Black American civil rights leader Martin Luther King (1929 - 1968) addresses crowds during the March On Washington at the Lincoln Memorial, Washington DC, where he gave his 'I Have A Dream' speech.

This is TALK OF THE NATION. I'm Rebecca Roberts in Washington.

Today, we celebrate the birthday of Martin Luther King Jr. As millions of Americans honor his legacy today with a national day of service, we take a moment to reflect on Dr. King's life and message with his own words. As we did last year on the eve of a historic presidential inauguration, we now revisit King's celebrated "I Have a Dream" speech, delivered on August 28, 1963 on the steps of the Lincoln Memorial.

Dr. MARTIN LUTHER KING JR. (Civil Rights Leader): Five score years ago, a great American, in whose symbolic shadow we stand today, signed the Emancipation Proclamation. This momentous decree came as a great beacon light of hope to millions of Negro slaves who had been seared in the flames of withering injustice. It came as a joyous daybreak to end the long night of their captivity.

Dr. KING: ...the Negro is still languished in the corners of American society and finds himself in exile in his own land. And so we've come here today to dramatize a shameful condition. In a sense we've come to our nation's capital to cash a check. When the architects of our republic wrote the magnificent words of the Constitution and the Declaration of Independence, they were signing a promissory note to which every American was to fall heir. This note was a promise that all men - yes, black men as well as white men - would be guaranteed the unalienable rights of life, liberty and the pursuit of happiness.

It is obvious today that America has defaulted on this promissory note insofar as her citizens of color are concerned. Instead of honoring this sacred obligation, America has given the Negro people a bad check, a check which has come back marked insufficient funds.

Dr. KING: But we refuse to believe that the bank of justice is bankrupt.

Dr. KING: We refuse to believe that there are insufficient funds in the great vaults of opportunity of this nation. And so we've come to cash this check, a check that will give us upon demand the riches of freedom and the security of justice.

Dr. KING: We have also come to his hallowed spot to remind America of the fierce urgency of now. This is no time to engage in the luxury of cooling off or to take the tranquilizing drug of gradualism.

Dr. KING: ...to lift our nation from the quick sands of racial injustice to the solid rock of brotherhood. Now is the time to make justice a reality for all of God's children.

It would be fatal for the nation to overlook the urgency of the moment. This sweltering summer of the Negro's legitimate discontent will not pass until there is an invigorating autumn of freedom and equality. 1963 is not an end, but a beginning. Those who hope that the Negro needed to blow off steam and will now be content will have a rude awakening if the nation returns to business as usual.

Dr. KING: There will be neither rest nor tranquility in America until the Negro is granted his citizenship rights. The whirlwinds of revolt will continue to shake the foundations of our nation until the bright day of justice emerges.

But there is something that I must say to my people who stand on the warm threshold which leads into the palace of justice. In the process of gaining our rightful place, we must not be guilty of wrongful deeds. Let us not seek to satisfy our thirst for freedom by drinking from the cup of bitterness and hatred.

Dr. KING: We must forever conduct our struggle on the high plane of dignity and discipline. We must not allow our creative protest to degenerate into physical violence. Again and again, we must rise to the majestic heights of meeting physical force with soul force. The marvelous new militancy which has engulfed the Negro community must not lead us to a distrust of all white people, for many of our white brothers, as evidenced by their presence here today, have come to realize that their destiny is tied up with our destiny.

Dr. KING: And they have come to realize that their freedom is inextricably bound to our freedom. We cannot walk alone. And as we walk, we must make the pledge that we shall always march ahead. We cannot turn back.

Dr. KING: We cannot be satisfied as long as a Negro in Mississippi cannot vote and a Negro in New York believes he has nothing for which to vote.

Dr. KING: No, no, we are not satisfied, and we will not be satisfied until justice rolls down like waters, and righteousness like a mighty stream.

Let us not wallow in the valley of despair, I say to you today, my friends.

Dr. KING: So even though we face the difficulties of today and tomorrow, I still have a dream. It is a dream deeply rooted in the American dream. I have a dream that one day this nation will rise up and live out the true meaning of its creed: We hold these truths to be self-evident, that all men are created equal.

I have a dream that my four little children will one day live in a nation where they will not be judged by the color of their skin but by the content of their character. I have a dream today.

Dr. KING: I have a dream that one day down in Alabama with its vicious racists, with its governor having his lips dripping with the words of interposition and nullification, one day right down in Alabama little black boys and black girls will be able to join hands with little white boys and white girls as sisters and brothers. I have a dream today.

Dr. KING: This will be the day when all of God's children will be able to sing with new meaning: My country, 'tis of thee, sweet land of liberty, of thee I sing. Land where my fathers died, land of the pilgrims' pride, from every mountainside, let freedom ring.

And when we this happen, when we allow freedom ring, when we let it ring from every village and every hamlet, from every state and every city, we will be able to speed up that day when all of God's children, black men and white men, Jews and Gentiles, Protestants and Catholics, will be able to join hands and sing in the words of the old Negro spiritual: Free at last. Free at last. Thank God almighty, we are free at last.

ROBERTS: That is, of course, Dr. Martin Luther King Jr. delivering his iconic speech on the steps of the Lincoln Memorial on August 28th, 1963.