Accessibility links
Tears And Doubts: Covering Haiti's Epic Disaster Close to a week has passed since the devastating earthquake struck Haiti, killing tens of thousands and reducing much of the impoverished country to rubble. Correspondents Jason Beaubien, Greg Allen and Jackie Northam, who were among the first group of NPR reporters to arrive in Haiti, share their impressions.

Close to a week has passed since the devastating earthquake struck Haiti, killing tens of thousands and reducing much of the impoverished country to rubble.

Correspondents Jason Beaubien, Greg Allen and Jackie Northam were among the first group of NPR reporters to arrive in Haiti to cover the unfolding tragedy.

Jason Beaubien, who has been on NPR's foreign desk since 2002, covers Mexico, the Caribbean and Central America out of Mexico City. The effect Haiti has had on the father of two was apparent early in the week when he choked up describing on NPR the scene outside a hotel where an injured girl was left because doctors were known to be staying there.

I've covered some big disasters before -- the Asian tsunami, Darfur, the Liberian civil war -- and this one is still mind-blowing. The extent of the devastation is really hard to convey.

In other disasters there's some clear answer -- it might be difficult, but there's an answer to how to solve the problem.

When I drive around Port-au-Prince, I keep asking myself: How is this city going to overcome this? And what is going to happen to all these people who are living outside in a couple weeks when the food's run out?

Where are they going to go when it rains?

I interviewed a woman [Saturday] who had hired a group of men to try to extract her brother-in-law's body from the collapsed office building where he died.

She said to me: "I don't think there's a single family in Haiti that's not crying right now."

Greg Allen: The Magnitude Of Tragedy

Greg Allen is NPR's Miami correspondent and typically focuses on issues that affect the American Southeast, from politics to the economy. He has also covered issues within Miami's large Haitian community.

I was out today [Monday] and saw a city that's struggling to find some semblance of normalcy. More gas stations are open and the lines are extremely long. Many street markets are operating and are very busy.

At the same time, there are still bodies on the street. Some people have begun burning bodies that have not been picked up, and acrid smoke permeates the air.

I'm filing a story today on the mass graves being dug outside of the city -- and the scenes we saw were upsetting to all of us -- me, my driver and my translator.

We began talking about God's will, and whether, as some people say, God was punishing Haiti for some transgression. I told them about a man I interviewed whose mother and four sisters were holding their evening prayer service when the earthquake hit, killing them all.

The sheer magnitude of this tragedy -- especially in terms of the number of people who have died -- make it the most affecting story I've ever been involved in covering. Sept. 11 and [Hurricane] Katrina were very difficult because it's hard not to become emotional at some of the scenes you see and make part of your stories. But here, there are so many deaths.

One man said Haiti's travails reminded him of the Bible and the story of Job. Maybe, he said, like Job, God is testing Haitians and their faith.

As journalists, we have jobs to do here. But there are so many people who still have immediate needs, that just covering the story somehow doesn't seem enough.

Jackie Northam: Walking Away Without Survivors 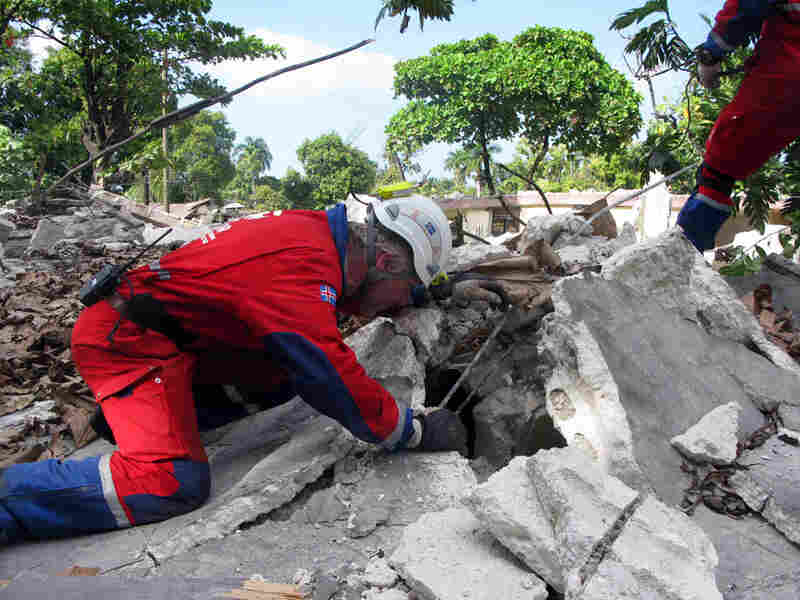 A member of the Icelandic search and rescue team searches under the collapsed roof of a school in Leogane, a city very close to the epicenter of last week's earthquake. Jackie Northam/NPR hide caption 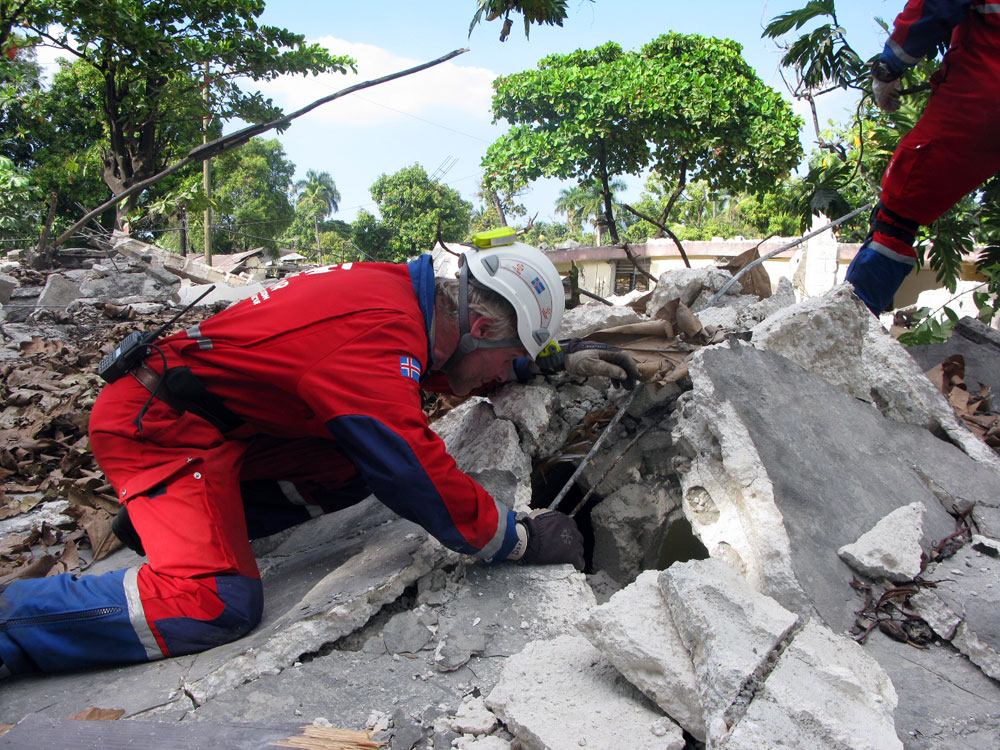 A member of the Icelandic search and rescue team searches under the collapsed roof of a school in Leogane, a city very close to the epicenter of last week's earthquake.

Jackie Northam, NPR's national security correspondent based in Washington, spent much of the past two years in Pakistan and Afghanistan covering war, elections, and the resurgence of al-Qaida and the Taliban. As a foreign reporter, she has documented genocide in Rwanda, the fall of communism, and war and conflict in the Middle East.

As a journalist, I am used to living on a deadline. Going out with search-and-rescue teams for the past few days makes my deadline seems frivolous. The race to find survivors under the rubble of collapsed buildings is critical and yet so much time seems to be lost because of disorganization and inefficiency.

I've been out with search and rescue workers from Iceland for a couple of days -- these guys are more comfortable looking for avalanche survivors than they are driving through the frenzied streets of Port-au-Prince trying to get to a particular collapsed building. They're also used to quickly picking up and going, rather than waiting for someone -- anyone -- in charge to decide where they should go and with what other search-and-rescue team.

Over the past couple of days, I find myself sharing what the Icelandic team describes as the hardest part of the process. That's walking away from a site without finding a survivor -- seeing the look in the faces of the relatives or neighbors who were hoping against hope. This is particularly true at the elementary and secondary schools --- the poor children just didn't get a full shot at life.