Accessibility links
After Earthquake, Haitians Hoping For A Way Out Look To U.S. Embassy Haitians have been gathering in front of the U.S. embassy ever since the earthquake, desperate to get a flight out of their shattered country. Rumors are rife that almost any connection to the U.S. can win them a visa. But they are in for a disappointment. 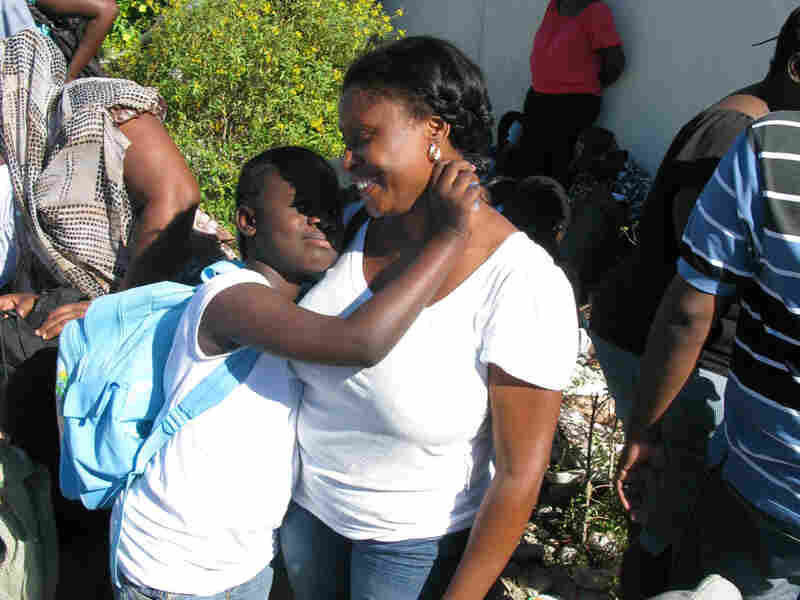 Margalita Belhumer (right) is seeking a U.S. visa for her 8-year-old daughter, Melissa. Belhumer, a Haitian-American, lives in New York City. She says she has raised Melissa since the girl was abandoned as an infant but had only recently started adoption paperwork. Marisa Penaloza/NPR hide caption 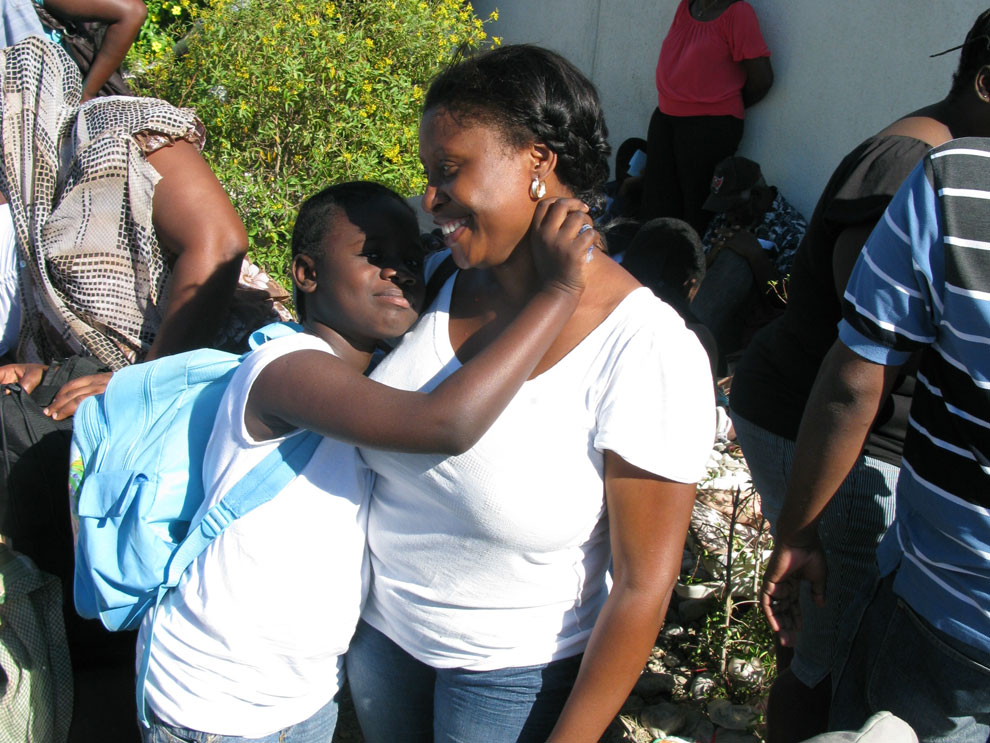 Margalita Belhumer (right) is seeking a U.S. visa for her 8-year-old daughter, Melissa. Belhumer, a Haitian-American, lives in New York City. She says she has raised Melissa since the girl was abandoned as an infant but had only recently started adoption paperwork.

Haitians have been gathering in front of the U.S. Embassy in Port-au-Prince since the Jan. 12 earthquake, desperate to get a flight out of their shattered country.

The line, which seems to grow every day, was estimated at 2,000 on Thursday. Rumors are flying through the streets that almost any connection to the U.S. can win a Haitian a visa. Many, however, are in for a disappointment.

Much of the capital has disintegrated into concrete chunks, but the gleaming white U.S. Embassy stands virtually untouched — a few light fixtures came loose inside. With its own power, water and sewage treatment, the brand-new embassy is a self-sufficient island of order in the bedlam of post-earthquake Haiti.

Haitians start lining up at the consular office before sunrise to ask — and beg — for transit out of their broken city.

Jean Joseph, a U.S. permanent resident, stood in line to get visas for his younger brother and sister, 20 and 18, who live in Haiti.

"If you got your parents, like you got all your family in U.S. and you got somebody in Haiti, they going to help you," Joseph said.

There's a rumor making its way around the capital that any Haitian with a relative in the U.S. can join his or her family. But U.S. officials say only Haitians with U.S. passports are being airlifted at U.S. government expense. Lost or buried passports are not a problem: The person will be in the U.S. database.

Margalita Belhumer, a Haitian-American who lives in New York City, was visiting Haiti when the quake struck nine days ago. She shaded her eyes from the tropical sun as her 8-year-old daughter, Melissa, squatted at her feet.

"I'm seeking to leave with my daughter. People are dead, place crumbled. She has nowhere to live, so I can't leave without her," Belhumer said.

She said she raised Melissa since the girl was a newborn infant, wrapped in a sheet and left on the sidewalk in front of St. Joseph's Catholic Church. Child abandonment by destitute mothers is not uncommon in Haiti. While Belhumer worked at her job as a security guard in New York, she paid a family to take care of Melissa. Belhumer said she had begun the adoption paperwork before the quake struck.

"I started the adoption process, but I started last month. But I've had her since the first day she was born," she said.

Bad News For Some

Standing nearby, a slim, courteous schoolteacher named Joseph Etienne brought 13 members of his family with him to stand in line in the 90-degree heat under the distrustful gaze of the embassy's Marine guards.

He said his family is sleeping under plantain trees since their home was pulverized. The family has no luggage with them because they lost everything in the quake.

In his pocket he carried two slips of paper with the names and addresses of in-laws in New Jersey. He hoped to persuades the consular officer to let his family of 14 enter the United States.

In the midst of the crisis, deep within the cool, soundless offices of the embassy building, Ambassador Kenneth Merten has been sleeping in his office, with his beagle, Sophie, taking an easy chair.

The ambassador has bad news for the Etienne family.

"We will tell him, 'Unfortunately, sir, there's nothing we can do for you. We're providing human aid and medical assistance and if that's what you need, we hope you can benefit from that.' But we can't facilitate people's travel to the U.S. in a case like that," Merten said.

The Etienne family and Belhumer will have to wait another day for an answer to their immigration requests. After waiting hours in line Thursday, they were among the Haitians told by a Marine guard there was no way they would make it to a consular window.