Accessibility links
Iggy Pop: The Voice As Weapon His isn't the first name you'd expect to see on a list of great voices. But when you think of voice in the broadest sense of the word — a person communicating an idea with an audience — then Iggy Pop more than holds his own. He's proved that a voice doesn't have to charm or seduce someone; it can provoke. A vocal can be dangerous. 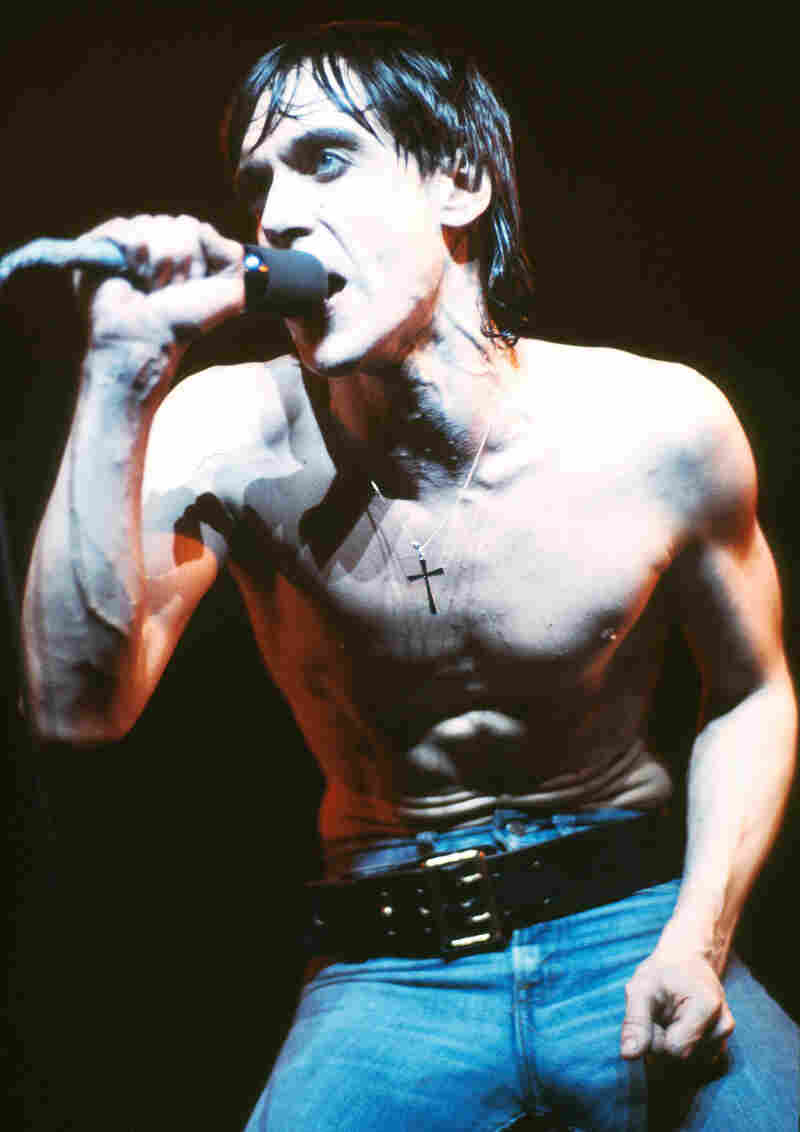 Iggy Pop isn't the first name you'd expect to see on a list of great voices. Great performers? Absolutely. The godfather of punk was among the first to launch his body into the audience. He would disappear beneath the writhing mass and emerge to be lifted high above the crowd's heads.

He would also easily make a list of the icons of rock 'n' roll. His work in the late '60 and early '70s with The Stooges brought a raw simplicity to music that would fuel the punk revolution for years to come. But a great singing voice? And yet here he is — a little surprising for a man who could barely hit more than a few notes on his first album.

But when you think of voice in the broadest sense of the word — a person communicating an idea with an audience — then Iggy Pop more than holds his own. He's proved that a voice doesn't have to charm or seduce someone; it can provoke. A song can be a weapon.

The best example of Iggy at war isn't from anything he ever did in a studio. It's from the live album Metallic K.O. It's The Stooges' last performance, recorded at an old crumbling theater in Detroit in 1974. As the album plays, you can hear the band falling apart musically, and then you hear an actual crash. Bottles and cups are being thrown at the stage, and Iggy pop starts to taunt the audience.

"You pricks can throw everything in the world, and your girlfriend will still love me," he purrs into the microphone.

Today, relaxing at his modest bungalow in Miami, Iggy Pop doesn't remember a lot from the show. It was during one of his heavy drug phases.

"I have a little movie that I play back in my head," he says. "I remember things flying in from the audience. It was a big, heavy night. It was the Wild West."

The night before, Iggy Pop had been beaten up by bikers, and on this night, he had challenged them to come back. On the album, you can hear glass breaking, and Iggy encouraging the crowd to throw more. Light bulbs, ice cubes, eggs and coins all came through the air.

"This is a band living out the whole imagery of what they've written about in song: going down in flames," says Paul Trynka, who wrote the rock star's biography, Iggy Pop: Open Up and Bleed. "This is the sound of a band being punched and brought down to a halt. It's a magnificent spectacle."

At the show, you can hear Iggy Pop giving up on his own music and launching into an especially raunchy version of "Louie Louie." He leaves the stage with a final insult: "You nearly killed me, but you missed again, so you'll have to try next week."

But The Stooges were finished. They broke up a couple of years before punk would hit it big. Members of The Sex Pistols, The Clash and the Ramones had been listening closely, and the Iggy style and sound would be carried forward through punk, new wave and even grunge 20 years later. Kurt Cobain would say that Raw Power by Iggy and the Stooges was his favorite album.

Iggy Pop made nothing seem more exciting than provoking a crowd to frenzy and mayhem. And it came from an unlikely source: Frank Sinatra.

"I'll never forget riding in the back of my parents' Cadillac, and my father was singing along," he says, before crooning in a rich baritone, "Fairy tales can come true / It can happen to you / if you're young at heart."

He grew up in Ypsilanti, Mich., as James Osterberg Jr., voted most likely to succeed in junior high. Hearing Sinatra, Iggy Pop says he thought, "Gee, I'd like to do that."

It wasn't the tone, necessarily, that he wanted to imitate. It was the distinctiveness of the voice. And when he teamed up with his chums to form a rock band, Iggy says he only wanted it to sound different.

"People tend to jump on the bandwagon, and the bandwagon at that time was dumb members of the British yob class growing their hair and butchering the American blues," he says. "It was very important what not to do. [Music] has to get up off the couch, walk around and be original."

When The Stooges released their first album in 1969, they stripped rock to the bare essentials. A couple of notes. A few chords. Good to go.

And Iggy Pop tapped into a topic that hadn't really been explored musically: teenage suburban boredom. He sang about having "no fun and nothing to do."

Trynka, Iggy's biographer, says the band's brilliance was that its members were willing to sound dumb.

"To actually say, 'I'm bored and unhappy, and there's nothing going on,' nobody had done that before. That was the real signpost of what was going to happen over the next 20 or 30 years."

Iggy himself didn't follow those punk-rock signs, though. And after The Stooges broke up, he got lost for a couple of years. Then he went with David Bowie to Berlin to explore the next stage of his voice, a deep baritone heard on the albums The Idiot and Lust for Life. He dabbled in ska and new wave, and in 2009, finally got to emulate Frank Sinatra and record an album of romantic standards.

Iggy Pop endures. In fact, he's back on tour this summer with some of the original Stooges. He still bares his chest. Still stage-dives. At 62, Iggy says his voice is stronger than ever, but admits it's missing something.

"The part you can't get is the attitude," he says. "I've got the same kid in me. But when he was ignorant, he was more compellingly dangerous vocally. I can't quite get to that place."

So he'll have to settle for another kind of place: Iggy Pop and The Stooges will be inducted this year into the Rock and Roll Hall of Fame.