Accessibility links
French Panel: Ban Burqas In Public Buildings A parliamentary commission has stopped short of calling for a full ban but recommended that lawmakers bar wearers of the garment from public buildings like schools and hospitals. 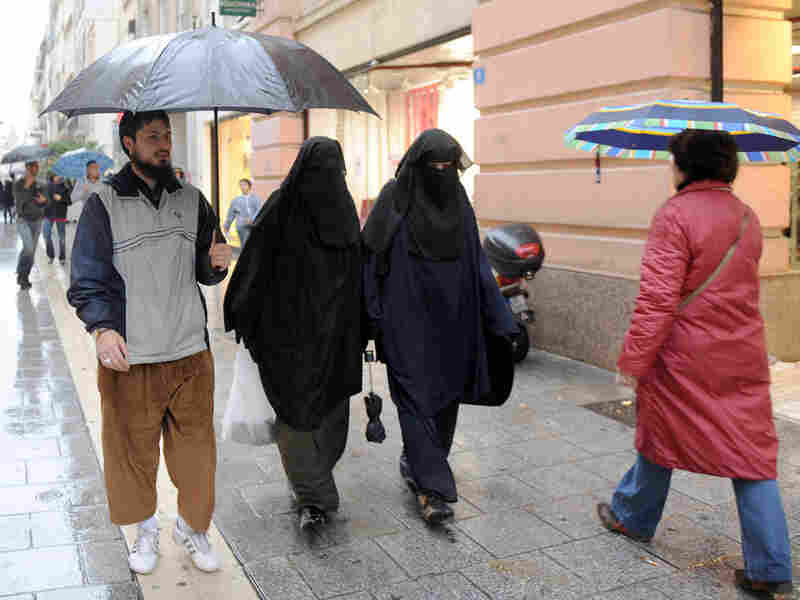 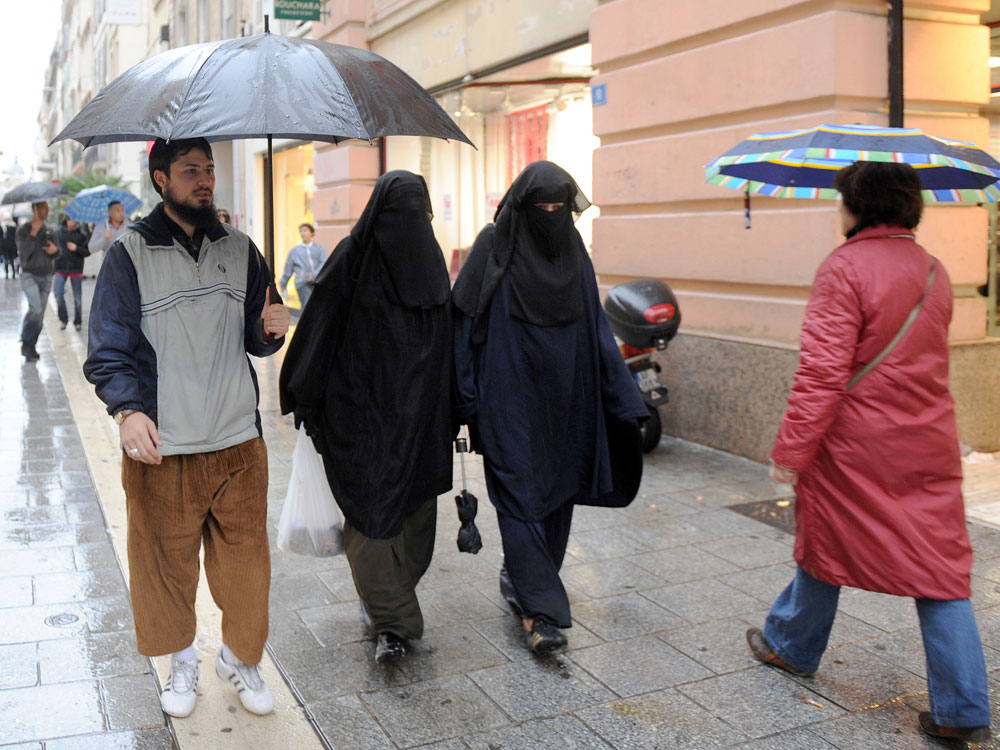 Two veiled Muslim women walk down a street in Marseille, in southern France.

A commission in France recommended Tuesday that the full Islamic veil, or burqa, be outlawed in public buildings such as schools and hospitals.

For the past six months, a debate over the burqa has embroiled the country — and it's not over yet.

"The burqa is not a religious problem," he told the French Parliament in a state-of-the-union-style address. "It's a problem of freedom and the dignity of women."

Sarkozy said the burqa, which allows the wearer to see through a cloth mesh, and its close cousin, the niqab, which leaves a slit for the eyes, subjugates women. A parliamentary commission began looking into the issue.

Its report, which was released Tuesday, recommends that Parliament ban the veil from public buildings, but not on the streets.

Jean-Francois Cope, leader of the Union for a Popular Movement, or UMP, Sarkozy's majority party in Parliament, believes France needs a solid law against the burqa.

"The two reasons why we have to implement legislation is to respect the rights of women and, second, it's a question of security. Who can imagine that in a country like ours, people can walk everywhere in the country and also in our cities with a burqa, without the possibility to recognize their face?" Cope says.

France is home to Europe's largest Muslim minority, but the sight of fully veiled women is not an everyday occurrence in most parts of the country.

At a street market in the north of Paris on a recent day, the shoppers and vendors were mostly immigrants from Africa and the Maghreb; no one was dressed in a burqa or niqab.

Like many, 22-year-old Salima Zebag wears a headscarf, or hijab. She says she thinks it is inadmissible in a country of so-called liberty to forbid people to wear what they want.

But Cope says it is "not a question of tolerance."

"We are very tolerant. Everybody can have his own religion, no problem with that," he says. "But it has to be subordinated to the law of the republic, and the law says you have to show your face."

Cope has been pounding home that message. Recently on a popular late-night talk show watched by millions of French people, Cope faced off with a woman wearing a niqab who went by the name of Dalilah. A frustrated Cope told the black-clad woman that he couldn't have a real conversation with her because he couldn't see her.

While polls show a majority of French people now support banning the burqa, the new report estimates that only between 300 and 2,000 women in France may actually wear it.

Many lawmakers are afraid that a draconian law would be pointless and further stigmatize Muslims, who are already bristling over a series of town hall-style debates on national identity in France that have unleashed a barrage of anti-Islamic sentiment.

Mohamed El Madani, who describes himself as a law-abiding, voting French citizen, says banning burqas, like banning minarets in Switzerland, is a blow to Muslims and a political ploy.

"For us Muslims, it's very simple, in fact. The part of the president is trying to make the people of the extreme right ... vote for the UMP, the president's party," Madani says.

Beyond Sarkozy, the debate over banning the burqa isn't so clear-cut. Politicians from the left and right are for and against it, and a prominent imam has come out for the ban, as has a mainstream Muslim women's group. While most French Muslims do feel stigmatized by the burqa debate, they also embrace France's strict separation of religion and the state.