Accessibility links
Study: Humans Were Born To Run Barefoot Researchers say that people who learned to run barefoot put less stress on their feet and legs than their shod peers. And it's more energy efficient, too. Barefoot is, after all, the natural way to run.

Humans are excellent two-legged walkers. It's one of the things that make us such successful creatures.

And there are some scientists who say we're naturally born runners as well, that our bodies evolved to run. Now, anthropologist Dan Lieberman, one of the proponents of the "human runner" school, concludes that we do it better without shoes.

He says human ancestors needed to run well — both away from big animals and after small, tasty ones, for example. He based that view on fossil bones. But lately he's been studying runners — living ones.

Video: A Look At Running With And Without Shoes

Shoes Or No Shoes, That Is The Question

It started at a lecture he gave before the Boston Marathon. A barefoot runner — someone who runs long distances without shoes — peppered the professor with questions he couldn't answer. So Lieberman took him to his lab at Harvard University. He had him run over a flat metal plate that measures the collisional force of a footfall. Lieberman says runners generate a lot of collisional force.

"Most runners, when they land and they heel-strike — they land on their heel — they generate this sudden impulse, this sharp spike of force. So it's like someone hitting you on the heel with a hammer, about 1 1/2 to 3 times your body weight," he says. 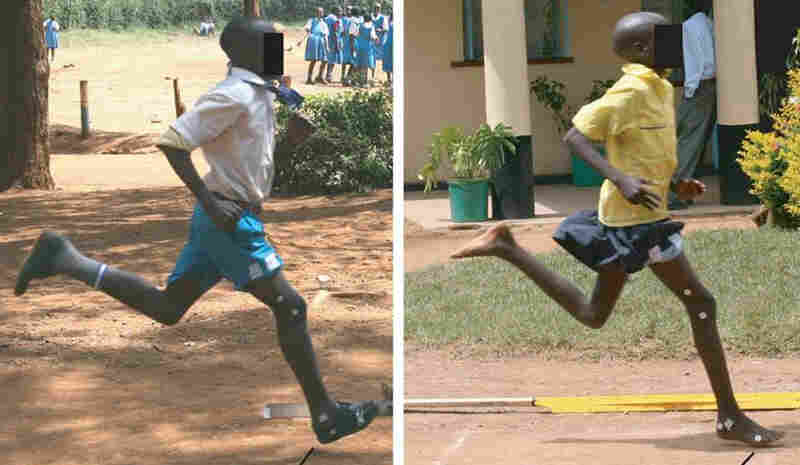 Most shod runners land on their heels, which generates a sudden, sharp spike of force. Barefoot runners land farther forward, closer to the ball of their foot, which exerts much less force in comparison. Benton et. al. hide caption

But Lieberman was surprised by the extremely low force readings made by the barefoot runner.

"He ran across the force plate, and he didn't have [a high spike], and I thought, gee, that's really amazing, and it kind of makes sense because that spike of force hurts, and I wonder if other barefoot runners do that."

Lieberman found that runners in shoes usually landed heel-first. Barefoot runners landed farther forward, either on the ball of their foot or somewhere in the middle of the foot, and then the heel came down — much less collisional force.

And people who switched from shoes to barefoot running eventually, without prompting, adopted the barefoot style. Lieberman, who runs marathons himself, says the reason is simple.

"It's pain avoidance. It's very easy to do. I mean, your body naturally tells you what to do," he says.

Running shoes dampen the shock of a heel-first landing, so that's probably why shod people run that way, Lieberman says.

But is that the most efficient way to run? Lieberman thinks not.

"Turns out that the way in which barefoot runners run seems to store up more energy," he says.

More Spring Out Of The Step

To understand how that works, I talked to anthropologist Brian Richmond at George Washington University. He points out that the human foot has an arch with ligaments inside that stretch and contract with every footfall.

"It allows the arch of the foot and the calf muscles to act as a better spring and to store up energy, and then give it back in the beginning of the next step," Richmond says.

Think of a compressed mattress spring pushed down and then released. Richmond agrees with Lieberman that the front-first landing of barefoot running probably capitalizes on that spring mechanism more than heel-first landing — it gets more spring out of the spring.

Richmond, in fact, has discovered fossilized footprints dating back 1.5 million years. Those human ancestors who left them had an arch. They were walking when they left the prints, but Richmond suspects that when they ran, they landed front-first.

"It looks like this is how our ancestors have been running for a million years or more," he says. "It's only been in the last 10,000 years that we've had any kind of shoes, really."

Lieberman published his findings in the journal Nature. He received research funding from a company that makes "minimal" shoes, which mimic barefoot conditions, but he adds that he received no personal income from the company. He also says he's not taking sides over which style of running is better or safer.

"I mean, I think we have to be really, really careful about what we do and don't know. We have not done any injury studies; this is not an injury study," he says. That's next.