Accessibility links
Haiti Moves Past Broken Bones To Future Needs Victims of Haiti's earthquake still need urgent medical care. But once broken bones are set and amputations completed, patients will need longer-term help. Haiti's next challenge: How to house and care for those recovering from life-changing injuries.

In Haiti, people are just beginning to put their lives back together.

Some banks and stores are re-opening, people are searching for jobs, and once again, there's food for sale in some markets. And the medical needs are beginning to move on from dealing with broken bones and amputations to more long-term issues.

A Doctor Returns To His Homeland To Help

Doctor Henri Ford is chief of surgery at Children's Hospital in Los Angeles. But when the earthquake happened, he quickly arranged to return to Haiti and provide medical care.

"I've been around and this is the worst thing I've seen," he says. "It's almost unfathomable and inconceivable."

That's because it's still unknown how many are injured; assessment surveys are just beginning.

Waldman says now that people are beginning to get care, they're also beginning to need post-op care. And that's a problem.

"The problem is that surgical wards can discharge people — 10 or 50 or 100 per day, each day — but the post-op care takes much longer," he says. So people are basically piling up in the hospitals, from quake-injured people to those needing routine care, like women in labor and children with appendicitis, for example.

Wendy Batson says some who suffered simple bone fractures that didn't break the skin have been told to come back later to get the fractures set. Batson heads the U.S. division of a nonprofit organization called Handicap International, which already had 100 aid workers in Port-au-Prince before the quake. 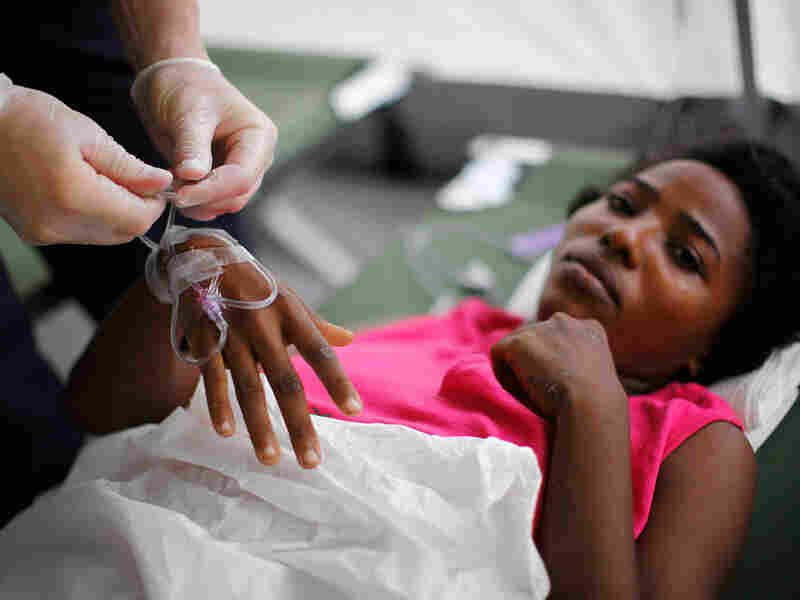 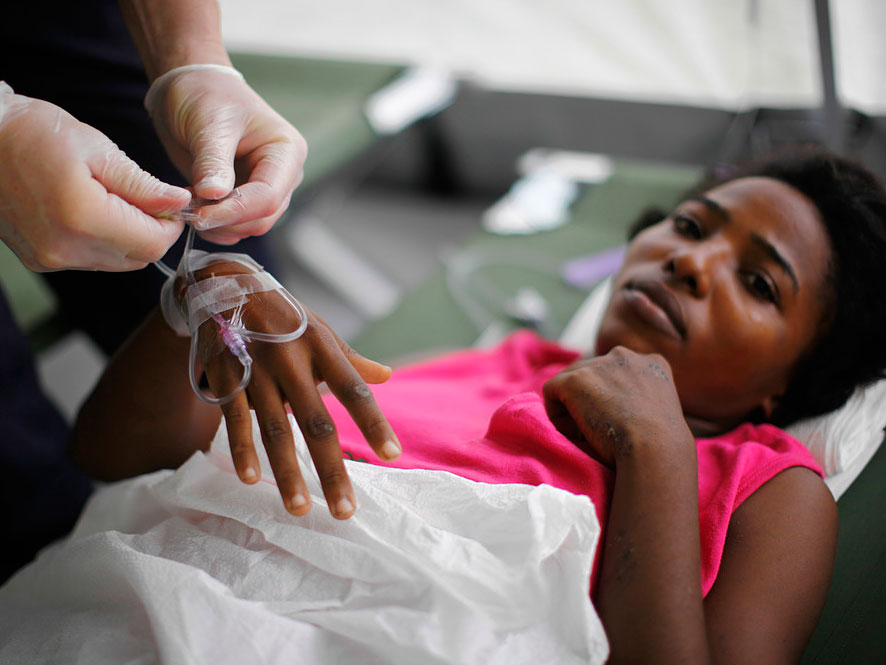 A woman receives treatment in a U.S.-run emergency clinic in Port-au-Prince.

"We're not out of the woods yet, and the mobile teams who are working the neighborhoods are still finding people with the kinds of infections that need to get into the medical system as soon as possible," she says. Many of those infections will likely end in amputation, as many have already. A gangrenous infection can kill a person in a day.

Prosthetic devices can't be used right away — the stump has to heal. Batson's group has been helping people do stretching exercises that can keep the muscles viable for the month or so before a temporary prosthesis can be used. Handicap International has also begun plans for a factory in Haiti that would make the more permanent prosthetics. The challenge, says Batson, is that there's no local health care system to build on.

"That's what's been so absolutely cruel about where this earthquake hit. Even in poor places like Pakistan there are backup medical systems within reach. And there's just not in Haiti," she says.

Meanwhile, planners like Waldman are worried about how people who escaped orthopedic injuries are living as they crowd together in parks in makeshift, roofless tents.

The things that keep planners up at night — diarrheal diseases such as cholera — haven't hit, at least not yet. But even before the quake, Haiti was struggling with two particularly difficult infectious diseases: HIV and tuberculosis. Waldman has heard the TB sanatorium was destroyed. Survivors who stop taking their medicines could spread TB.

As for the second disease, HIV/AIDS, there is some hope. A partially destroyed clinic that was distributing antiretroviral drugs to 12,000 patients has managed to hang on.

Jean Marc de Matteis is a fundraiser for Gheskio clinic. He says that the clinic, which was partially destroyed, is still distributing drugs to 80 percent of its clients. De Matteis says that now is a key time for action — not just distributing the drugs, but raising money.

"We are well aware that in two months, three months, these kinds of things fade from the headlines," he says. "We want to see if we can raise as much money now so we can really tackle the massive issues we need to be tackling."