Accessibility links
What To Expect From The Super Bowl Commercials: The Usual Suspects Controversy is usually not among the things you can count on from Super Bowl ads. This year, it will be, but usually, the reliable elements of Super Bowl advertising are entirely different.

What To Expect From The Super Bowl Commercials: The Usual Suspects

What To Expect From The Super Bowl Commercials: The Usual Suspects 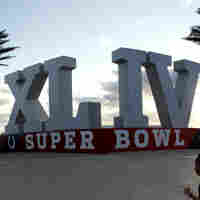 Super Bowl XLIV is fast approaching, and the ads are sure to suck up plenty of the attention Charlie Riedel/Associated Press hide caption

Let's face it: most of the attention for this year's Super Bowl ads has, thus far, gone to the controversy over the Tim Tebow ad and the Mancrunch.com ad (opposing perspectives on Tebow can be found here and here, if you haven't read enough yet; the skinny on the Mancrunch ad is here).

And that's a shame, because controversy is usually not among the things you can count on from Super Bowl ads. This year, it will be, but usually, the reliable elements of Super Bowl advertising are entirely different.

Creepy versions of celebrities. This truTV ad that's already available on YouTube shows a shrunken version of the Pittsburgh Steelers' Troy Polamalu. This would also include Robert Goulet "messing with your stuff" when you pass out from hunger in the afternoon.

Pretentious bloviating. Surprisingly, with all the goofs and all the beer, there's often somebody who manages to get all puffed-up and pretentious about what their company personally means to the world. You can probably blame that dopey "1984" Apple ad -- you know, where the lady in the headband overthrows the government with the skills she learned in the Highland Games -- for this. But sales pitches masquerading as social commentary never go out of style, so don't be surprised if this year, somebody uses a Verizon phone to save a rare species of trout.

Making fun of yourself, Brett Favre's latest, and more, after the jump.

Self-deprecating humor. You might expect substantially more of this after last year's Hulu ad in which it basically said it was trying to make you stupid. This is a very, very hard tone to pull off, though, and it really depends on the product. If Budweiser wanted to switch to a campaign where it explained that it really does want to provide the fastest and cheapest possible route to bad judgment and vomiting, that would presumably be less funny. Similarly, Brett Favre is doing one about how hilarious it is that he keeps jerking everybody around year after year about retiring, and the possibility that he could keep up with this stunt for another ten years, HA HA HA! Does anyone find that amusing except him?

Hilarious deaths or near-deaths. For some reason, Super Bowl commercials really enjoy killing or almost killing people in weird ways. Bud Light once sucked a guy into a jet engine, while Bridgestone almost killed Richard Simmons with a speeding car. As a character in a Super Bowl ad, you can always be impaled by snack chip, trampled by animals, or otherwise sent to a horrible fate, and everyone will say, "Ha ha ha, that is certainly a very funny depiction of a person bloodlessly expiring in a situation where he would in fact very bloodily expire."

Those freaking horses. You know the horses I'm talking about -- don't pretend you don't. There was some talk of getting rid of them this year, but now Bud fans are being asked to vote on possible ads, and you just know those freaking horses are going to win, because for some reason, they remain endlessly popular. To quote Hitfix's perplexed Dan Fienberg in a line from this podcast, "It's like we've never seen a large horse before."

Guys whose true natures are being thwarted by women. He just wants to drink beer/watch the game/see his friends/scratch himself/take a nap! She keeps trying to make him drink wine/watch ballet/hug her mother/stand up straight/take a shower! He is Twentieth Century Commercial Man, and he is very confused. He has not shaved, but that doesn't mean he is not valiant! His hoodie is not a sign of anything other than his love of hoodies! What does she want from him? Is it still okay for him to sarcastically complain about The Bridges Of Madison County, or should he find something a little more recent? Twentieth Century Commercial Man's struggles never grow old to the people who make commercials.

Animals. Oh, yes. There will be animals other than the freaking horses. Monkeys, elephants, lions, squirrels, frogs, pigeons, cockatoos -- last year, there was a moose. If there is any universe in which a dog can be the president, it is the world of Super Bowl commercials. (Cue the part where someone tells me there was already a Super Bowl commercial where a dog was the president.)

Disgusting things. We're not talking here about the scatological or the offensive, exactly. But CareerBuilder.com had one where a lady's heart went leaping out of her chest and walked away. That's gross.

Guys getting hit in the babymaker. They did it to Justin Timberlake when he kept getting slammed into the mailbox. Given the ongoing popularity of injured dolts as a Super Bowl motif, they will probably do it to someone again.

Beautiful ladies. Very often, in the Super Bowl ad world, beautiful ladies are not so much actually beautiful as they are cartoonishly beautiful -- pneumatic goddesses with cascading blonde hair and toothy grins. They represent the idea of beautiful women in a short play almost always called "The Schmuck And The Beautiful Woman." Generally, the lesson is that beautiful women love any guy who drinks the correct beer, although sometimes, the lesson is that beautiful women will always shut down anyone they encounter, so you might as well get drunk, eat Doritos, and/or try day trading online. The beautiful woman is to be compared with the other kind of woman who appears in Super Bowl commercials: Madame Grotesque. Usually, Madame Grotesque shows up just long enough to represent the horrible fate that awaits you if you don't know what to drink, eat, or purchase, but Planters once asserted that even Madame Grotesque, with her mole and unibrow, would get plenty of dates if she would only rub cashews behind her ears. This presumably does not apply to men with nut allergies, who will be dropping in front of her for an entirely different reason.

You can preview some of the actual ads on tap or watch for yourself to see how close we are -- we wouldn't dream of spoiling you on most of what's to come.