Photo Gallery: A White House Celebration Of Music From The Civil Rights Movement 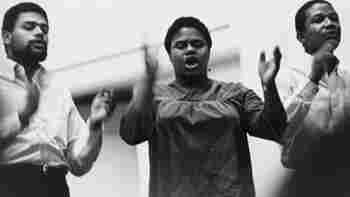 The concert was the fifth in a series dedicated to "Music that tells the story of America," as President Obama described in his opening remarks. The evening traced a story from the spirituals born in the early days of slavery to the new songs that evolved and emerged to sustain the marches and protests of the 1950s and 1960s. In a rare overt reference to the role the Civil Rights Movement played in his own path to becoming President, Obama singled out Representative John Lewis as a "man whose sacrifices made it possible for me to be here tonight."

A highlight of the evening came when noted singer, scholar and former member of the Freedom Singers, Dr. Bernice Johnson Reagon stopped down a performance of "Ain't Gonna Let Nobody Turn Me Around" to get the audience to join in, noting: "I know this is a show, but you have to sing this song. You can never tell when you might need it." The audience responded with gusto.

One of the most famous voices of the era, Bob Dylan, took the stage for his first performance at the White House. He offered a plaintive version of "The Times They Are A Changin'" playing a guitar with piano and bass accompaniment.

The emcee for the concert, Morgan Freeman introduced musical guests and read short excerpts from passages by noted Civil Rights figures, by the end lamenting, "I wish I could sing." And he finally got his chance: everyone, including President Obama finished off the concert with a celebratory sing-along of "Lift Every Voice and Sing."

The event began earlier in the day with a "Music Of The Movement" workshop for high school students lead by Smokey Robinson and Grammy Museum Director Robert Santelli and featuring performances by original freedom singers, Yolanda Adams and the Blind Boys of Alabama. The students were encouraged by Santelli to "remind people that music is an agent of change." Many of the students attended the concert that evening, and as crowds milled in the East Room foyer after the show, a group of students spontaneously broke into a version of "Lean On Me." The crowd took notice and looked grateful for the reminder.

Special thanks to WETA, Washington, DC, and to PBS.