Accessibility links
Pale Blue Dot: An Alien View Of Earth Twenty years ago this week, the Voyager 1 spacecraft captured a radical view of Earth. Shot from a distance of 4 billion miles, the "pale blue dot" image showed our planet as a tiny speck amid the vastness of space. Carl Sagan, who lobbied for the photo, said it reduced our entire world to "a mote of dust suspended in a sunbeam." 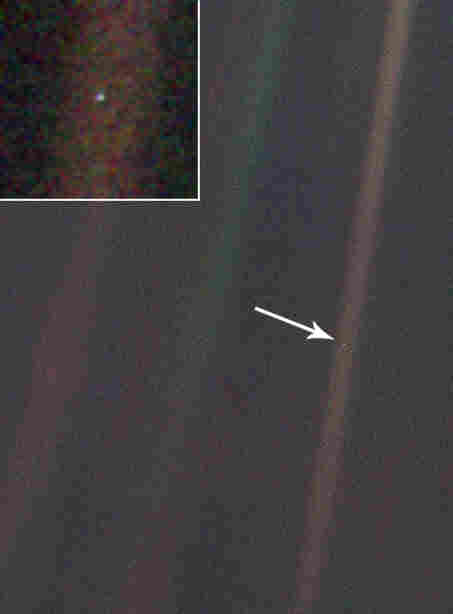 Taken in 1990 by NASA's Voyager 1 spacecraft, the "pale blue dot" photo shows what our planet looks like from 4 billion miles away. Earth is the tiny speck of light indicated by the arrow and enlarged in the upper left-hand corner. The pale streak over Earth is an artifact of sunlight scattering in the camera's optics. NASA/JPL hide caption

Audio Gallery: Views Of Earth From The Middle Ages To The Space Age 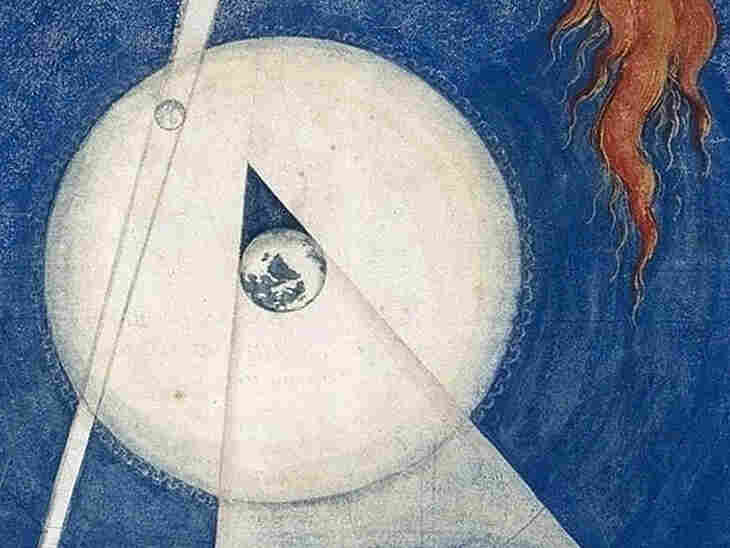 This week marks the 20th anniversary of a photograph. It's a very dramatic photo, even though, at first glance, it's mostly dark and seems to show nothing at all.

But if you look closely, you can see a tiny speck of light. That speck is the Earth, seen from very, very, very far away.

Two decades ago, Candice Hansen-Koharcheck became the first person to ever see that speck, sitting in front of a computer at NASA's Jet Propulsion Lab in California. "I was all alone, actually, that afternoon, in my office," she recalls.

Her office was dark. The window shades were drawn. She was searching through a database of images sent home by the Voyager 1 spacecraft, which at the time was nearly 4 billion miles away. "I knew the data was coming back," she says, "and I wanted to see how it had turned out."

Finally, she found it.

"It was just a little dot, about two pixels big, three pixels big," she says. "So not very large."

But this was the Earth — seen as no human had ever seen it before.

What's more, an accidental reflection off the spacecraft made it look as though the tiny speck was being lit up by a glowing beam of light. "You know, I still get chills down my back," says Hansen-Koharcheck. "Because here was our planet, bathed in this ray of light, and it just looked incredibly special."

And yet, if you weren't searching for it, that special little speck would be almost invisible. The Apollo astronauts had taken photos that showed the Earth as a big blue marble, swirling with clouds and continents. But this picture showed the smallness of Earth in the vastness of space.

A New Perspective On The Planet

The late astronomer Carl Sagan eloquently tried to express how he felt about this photo in his book Pale Blue Dot:

Look again at that dot. That's here. That's home. That's us. On it everyone you love, everyone you know, everyone you ever heard of, every human being who ever was, lived out their lives. The aggregate of our joy and suffering, thousands of confident religions, ideologies, and economic doctrines, every hunter and forager, every hero and coward, every creator and destroyer of civilization, every king and peasant, every young couple in love, every mother and father, hopeful child, inventor and explorer, every teacher of morals, every corrupt politician, every 'superstar,' every 'supreme leader,' every saint and sinner in the history of our species lived there — on a mote of dust suspended in a sunbeam.

Robert Poole, a historian at the University of Cumbria in the United Kingdom who wrote a book on images of Earth from space called Earthrise: How Man First Saw the Earth, says this particular photo shows what an extraterrestrial might see as it approached our solar system. 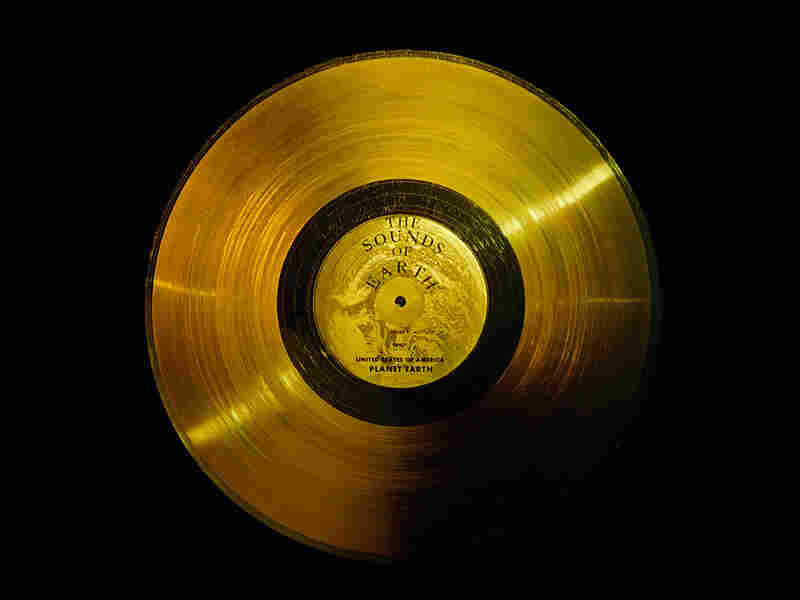 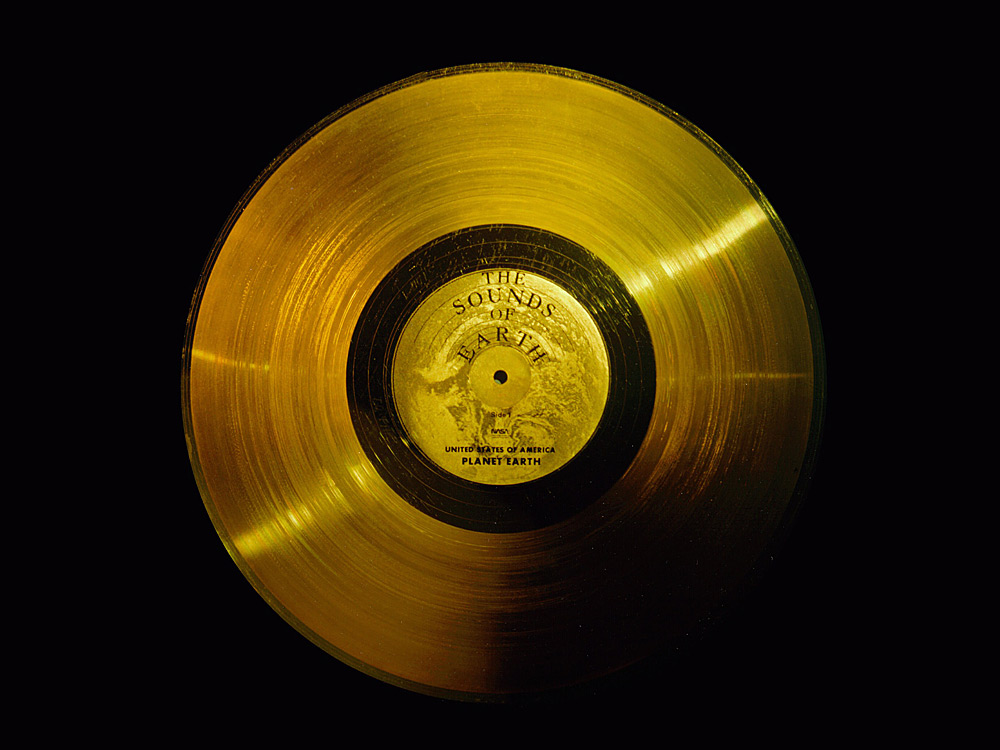 Onboard the Voyager spacecraft is a 12-inch, gold-plated record with greetings in 59 languages, music samples and images.

"This is not our view. We've managed to go out and get the view that somebody else might have, whereas the early Apollo pictures of the blue marble were our own view of Earth," Poole says. "Like most people, I saw it in the newspaper not long after it was taken and kind of intellectually I thought, 'This is amazing!' "

A Photo That Almost Didn't Happen

Pictures like this are still few and far between. They are not exactly easy to take. In fact, we almost didn't get this one. Sagan lobbied for it early in the Voyager 1 mission. But others objected that taking it might fry the spacecraft's camera. That's because the Earth is so close to our extremely bright sun. "There was a reluctance to take any kind of risk when we would point back towards the sun; we didn't want to accidentally damage the cameras in any way," says Hansen-Koharcheck.

"Oh, there was a lot of debate as to what its value would be," recalls Edward Stone, who was — and still is — the chief scientist for the Voyager mission. "It was not a scientific image. It was really, I think, an image to sort of declare that here, for the first time we could take such an image, and second of all it provided a new perspective of Earth and its place in our solar neighborhood."

But the idea was shelved for years, as Voyager 1 flew through the solar system and did its science, sending images back from Saturn and Jupiter.

In 1989, the mission was winding down — some staff was going to leave. And Sagan made a last-minute request to please, please, take this unique photo before the opportunity disappeared forever. The decision went to the top levels of NASA "because it was going to extend the mission in terms of imaging capability for an additional six months or so and that of course did cost money," explains Stone.

"I did get a visit from Carl Sagan. We talked about a lot of things. And somewhere in that conversation he mentioned this idea," recalls the then-head of NASA, retired Vice Adm. Richard Truly. "I thought, heck, with Voyager so far away, if it could turn around and take a picture of the different planets including the Earth, that that would really be cool. And so I was a great advocate of it, although I can't take any credit for it."

A Relatively Tiny Object In The Vastness Of Space

Later, the image was released to the world to great fanfare. But it never really captured the popular imagination like the famous Apollo images.

"I think it was hard — it's still hard — to get really your head around the fact that our solar system is so immense, compared to Earth," says Stone.

To get the full impact of this photo, Stone says, you really have to see it up on a wall, as part of large panorama that Voyager 1 took of the solar system's distant planets.

NASA's Jet Propulsion Lab used to have just such a display with the full mosaic of photos posted up in an auditorium, says Hansen-Koharcheck. "And to show the whole thing it covered, oh, I don't know, 12 or 14 feet," she says — of mostly empty black space, with just a few pinpricks of light showing the planets. One of them was labeled Earth.

"One of the guys that took care of that display told me one time that he was forever having to replace that picture," says Hansen-Koharcheck, "because people would come up to look at it and they would always touch the Earth."

Voyager 1 is now about three times farther away than it was 20 years ago, says Stone. The spacecraft still routinely phones home, although its cameras no longer take photos. But if it could send back another picture, the little dot that is Earth would look even fainter and even smaller.