Accessibility links
Aquaman No Longer Sleeps With The Fishes! I Should Probably Rephrase That. Aquaman's coming back from the dead, but his fans are less than sanguine about his long-term chances. They've been burned too many times.

Aquaman No Longer Sleeps With The Fishes! I Should Probably Rephrase That.

Aquaman No Longer Sleeps With The Fishes! I Should Probably Rephrase That. 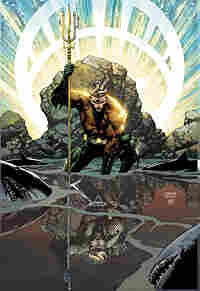 He's returning from the dead, is my point.

We haven't seen much of DC's erstwhile Sea King lately. Oh, he's shown up as one of the many voluble super-zombies now overrunning the DC Universe in the mass-spandexhumation event called Blackest Night. But then, who hasn't?

Here's the Blackest Night precis: Reanimated corpses of fallen heroes and villains have returned to feast on the raw emotions of living heroes. Read: There's been a glut of costumed corpses delivering monologues meant to get the living heroes in touch with their feeeeelings.

(Think Judd Hirsch in Ordinary People, only more sinister, and with bits falling off him, and instead of that bulky knit sweater: tights and a cape.)

Last week DC announced that when the Blackest Night is over, there will come a Brightest Day, and released the teaser image above. It sent the the hearts of ardent Aquaman fans aflutter, and aTwitter, lemme tell YOU.

Understand: It's never been easy, loving Aquaman. There's all the shrill "He just talks to fish!" jeering to contend with, for one thing. (I've attempted to contend with it myself, using, on one occasion, some salty language, so be warned.)

But people who dismiss The Swift and Powerful Monarch of the Ocean are the sort of people who root for the alpha dog, not the underdog. They are drawn to privilege, not spirit; power, not heart; Yankees, not Cubs; Cameron, not Bigelow; Superman, not Aquaman.

Listen: It is the easiest thing in the world to love Superman. It risks nothing. Everything comes easy to Superman.

But Aquaman? That guy's had a rough go of it.

And so have his fans.

After the jump: GOOD NEWS: The Sea King has enjoyed a long and storied reign. BAD NEWS: Largish chunks of that reign have been spent under less-than-ideal conditions, e.g. dead. Or displaced in time. Or with a squid for a face. Or in Detroit.

This recent history of the character reads like nothing so much as a decades-long Good News/Bad News joke. Viz:

In 1964, in a single ceremony, Aquaman assumed the throne of Atlantis and wed other-dimensional, butt-kicking, hard-water-power-having Mera. Just five months later, tsk tsk, she bore a son, Arthur, Jr., aka Artie, aka ....Aquababy. Shut up.

In 1977, Aquaman's foe Black Manta killed li'l Artie, sending Aquaman on a quest of self-discovery and self-recimination that would alter the character's personality for years to come. He became brooding, hot-headed, and haughty, very like his Marvel opposite number, Prince Namor the Sub-Mariner. His marriage to Mera deteriorated.

In the mid-80s, a haughty Aquaman haughtily told the big guns of the Justice League (Superman, Batman, Wonder Woman, etc.) where to get off, with great haughtiness. They were dividing their time too much, he told them, and the League was suffering from their inattention. Commit or quit, he said. They quit. And Aquaman became chairman of the Justice League of America.

To replace the big guns, Aquaman recruited some pea shooters like Vibe, Vixen, Gypsy and Steel. So began the Coy and Vance Duke era of the Justice League. Aquaman moved the League from their impossibly high-tech satellite 23,000 miles above the Earth to ... a bunker. In Detroit.

I say again: A Detroit bunker.

And then, after a few adventures (and lots of shouting at everybody), he left the team to go work on his troubled marriage.

(To be fair, this era of Justice League history has its vocal supporters. But many were relieved when this version of the League met a brutal end.)

GOOD NEWS! After A Decade of Dithering, Aquaman Gets His Own Long-Running Series!

The next ten years saw several Aquaman one-shots and short-lived Aquaman series attempt to do something with the character. His world became a bit more mystical, Mera went insane, he finally got over his anger (although that didn't take), and his origin got tweaked.

A bit later, Peter David's The Atlantis Chronicles mini-series created a cohesive history for the undersea city, and Aquaman's place in it.

In 1994, David launched his own Aquaman series. This one built on the rich mythic history and characters he'd established in The Atlantis Chronicles, and surrounded Aquaman with a cast of compelling characters.

David stayed on the series for 46 issues, making some changes to the character that were perfectly matched to the grim, angst-ridden storytelling that took hold of comics in the mid-90s.

Aquaman lost a hand to piranha (long story), but replaced it with a detachable hook that, okay, looked kinda piratey and cool.

He switched the classic orange and green supersuit for a sort of gladiator number.

He affected a sea-captain mein, complete with goatee and Fabio hair. And he started messing around with a sea-chippie named Dolphin. (A WOMAN whose NAME was Dolphin, okay? Not an actual Tursiops truncatus. That's how rumors start.)

But if Aquaman was haughty before David got his hands on him, he grew increasingly pompous with every subsequent issue. David left the book suddenly when DC Comics refused to let him (temporarily) kill Aquaman to turn him into a water elemental, and the title lumbered along for another couple years under various writers.

GOOD NEWS! Aquaman's back in the JLA!

Meanwhile, writer Grant Morrisson was accomplishing a feat that few writers had ever managed to pull off: He made Aquaman work as character in a team book. The Aquaman that appeared in the pages of Morrisson's JLA run retained Peter David's distinctive look, but came off a bit less imperious, and Morrisson had a gift for embracing the character's, ah, unique set of powers in novel, narratively interesting ways.

Soon after Morrisson left the JLA book, Aquaman presumably died saving the Earth during the 2001 crossover event Our Worlds at War. Only he didn't die: He'd been sent back to pre-history. When he eventually got back to the present two years later, he was, predictably enough, sulky about it.

In 2003 writer Rick Veitch launched a new series that departed from the character's history and created one of its own, steeped in Arthurian legend. Aquaman was now a servant of the Lady of the Lake herself, who replaced his hook-hand with a hand of ... mystical ... water.

BAD NEWS! It's a Put-On!
The following is a quote from Veitch's first issue, a bit of Aquaman's narration as he swims the dark seas, wracked with guilt over the plight of his kingdom. Ready?

"I hear the cruel laughter of mollusks, mocking me."

The cruel laughter. OF MOLLUSKS.

Now, Veitch is a good writer, and frequently a funny one. I put it to you that it is impossible to read a line like "the cruel laughter of mollusks" as anything but a joke. And once you accept that, his entire run on Aquaman makes more sense, especially when you consider that it involved Aquaman not being able to hit anything with his water-hand, lest he endanger the healing powers of the mystic energy that is at the core of all creation and blah blah blah.

Veitch was clearly camping it up, which is cool. Certainly the character's ripe for a bit of fun. But his run was too incoherent and too beholden to hokey, faux-fantasy elements to amount to anything but a puzzling mess, and he left the book after 12 issues.

GOOD NEWS! Aquaman's Getting Another Chance!

Writer Will Pfiefer took over the series on issue 15. He kept the classic orange and green, clean-shaven Aquaman Veitch had restored, and kept the water hand.

In a smart move, he gave Aquaman a new base of operations by sinking the city of San Diego under the ocean with an earthquake. He also provided an intriguing central, driving mystery: The city's sinking coincided with an event that changed the entire population into water-breathers.

For the first time in many years, Aquaman returned to his roots as a sort of undersea sheriff, and the title thrived, briefly.

BAD NEWS! Not For Long!

In less than a year, however, Pfeifer was out, and a new writer was brought in to fit the storyline into yet another universe-spanning crossover event that saw the return of Mera, the destruction of Atlantis, and a puzzling death/transformation for Aquaman.

GOOD NEWS! A New Direction for Aquaman! With a Great Writer!

In May of 2005, with issue #40, the series was renamed Aquaman, Sword of Atantis, and reconceived, by the great Kurt Busiek, as a sort of waterlogged Frank Frazetta swordfish-and-sorcery tale.

BAD NEWS! This New Direction Leads to an Aquaman Who Isn't Aquaman, and The Guy Who Used to be Aquaman Having A SQUID FOR A FACE

Busiek decided that classic Aquaman had run his course, and seemingly killed him off to replace him with a young kid who fights monsters and magic-with-a-k, advised by a mysterious, hooded, tentacle-bearded presence called the Dweller in the Depths, not to put too fine a point on it.

That said squid-bearded presence was in fact the original Aquaman was evident from the first, but it took another 10 issues, and another writer, for the book to acknowledge it, whereupon the original (now squiddy) Aquaman was summarily killed off, in the May 2007 issue.

GOOD NEWS! There Will Come a Brightest Day!

And that's more or less where we stand, until last week's announcement.

"Brightest Day' is about second chances. I think it's been obvious from Day One that there are major plans for the heroes and villains from Aquaman to take center stage in the DC Universe, among many others, post-Blackest Night."

The money quote, from a bit later in the very same press release: