Accessibility links
Peterson, Courts Await Ruling On 'Drew's Law' The fate of a move to allow hearsay evidence in court is being decided in Chicago, Ill. The namesake of the so-called "Drew's law," Drew Peterson, stands accused of murdering his third wife and is a suspect in the disappearance of his fourth wife. 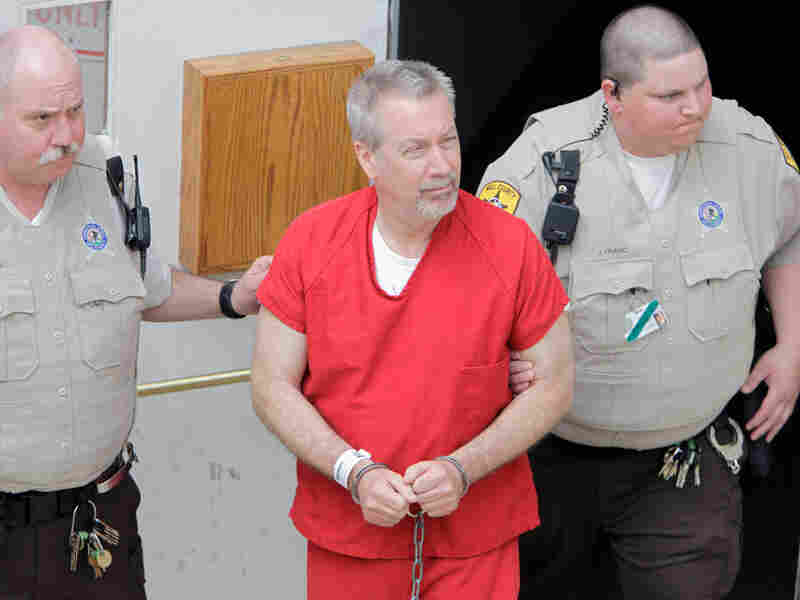 Drew Peterson is accused of murdering his third wife and is suspected in the disappearance of his fourth wife, Stacey Peterson. M. Spencer Green/AP Photo hide caption 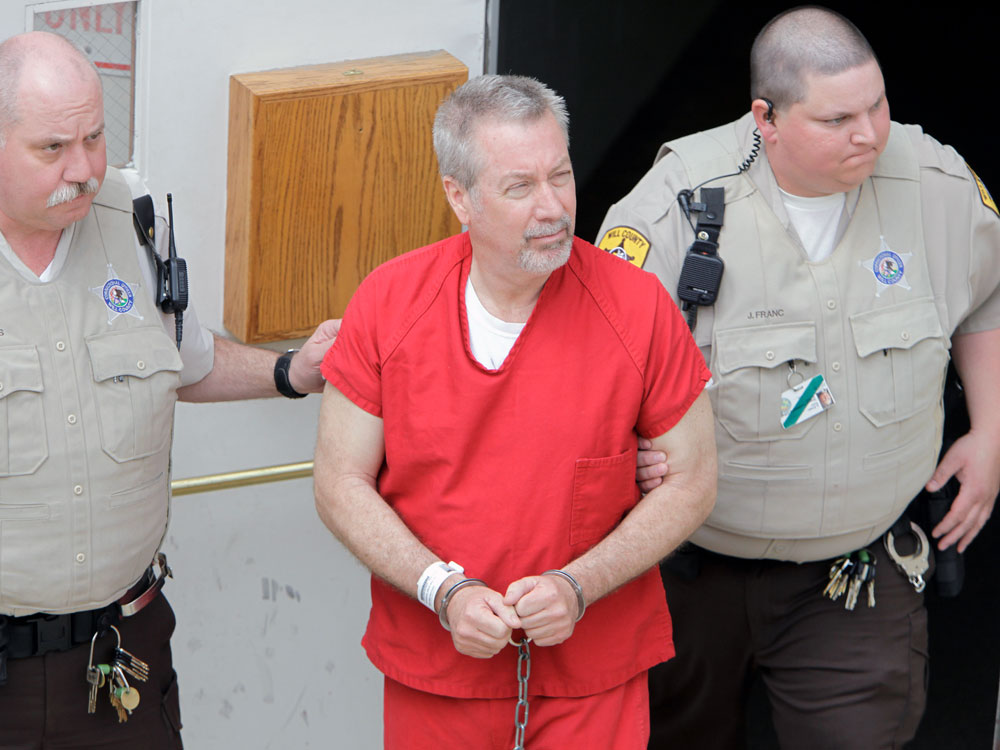 Drew Peterson is accused of murdering his third wife and is suspected in the disappearance of his fourth wife, Stacey Peterson.

In Illinois, a former police officer has been at the center of a murder mystery for years. Drew Peterson stands accused of killing his third wife, and he's a suspect in the disappearance of his fourth wife.

Now, an exception to typical judicial proceedings dubbed "Drew's law," could allow jurors to hear the words of Peterson's dead and missing wives in court. A crucial pretrial hearing has ended and a judge will now rule on the controversial issue of hearsay evidence.

Man At The Center Of The Controversy

Drew Peterson was a cop in Bolingbrook, Ill., a suburb of Chicago, for 29 years. He has been married four times and both of his last two wives told friends and relatives they feared him. Peterson's last wife, Stacey Peterson, disappeared two years ago. After she disappeared, officials reopened an investigation into the 2004 death of Peterson's third wife, Kathleen Savio, whose body was found in a bathtub. Her death was initially ruled an accidental drowning. Later her body was exhumed and a coroner ruled it a homicide.

Peterson has courted the media throughout the investigations. He discussed the case as he made the rounds on national television shows such as CNN's Larry King Live and NBC's Today Show.

There's been no physical evidence to link him to his third wife's death or his fourth wife's disappearance, and Peterson pleaded not guilty to first-degree murder charges. But during a nearly month-long hearing that ended Friday about 70 witnesses testified. Several said Kathleen Savio and Stacey Peterson were afraid of their husband, and that Savio, who was divorcing Peterson, feared he would kill her.

Outside the courthouse, Pamela Bosco, a spokesperson for the family of missing Stacey Peterson says hearsay evidence should be heard in Drew Peterson's upcoming trial.

"There's a lot in the past that these women had spoken and written about that pointed in the direction of Drew as their abuser," Bosco says. "So I think that should be paid attention in court. Even though they are not here to say it, I think their words should be recognized."

It's unconstitutional and also a violation of an ex post facto. A law that's passed in 2008 cannot affect the prosecution of an alleged crime that took place in 2004.

Typically hearsay — a statement made outside of judicial proceedings — is considered unreliable and not allowed in trials. However, there are plenty of exceptions in federal and common law and in several states.

In 2008, the Illinois General Assembly passed a measure quickly dubbed "Drew's law." It allows a judge to admit hearsay statements if a prosecutor can prove a defendant may have killed a witness to prevent him or her from testifying. Former judge and Chicago-Kent College of Law professor David Erickson says that is very similar to federal rules of evidence, which were aimed at cases involving the mob or organized crime. In these types of cases there was sometimes a fear that people on trial would kill the witnesses testifying against them.

Two Supreme Court rulings are at the heart of the debate over "Drew's law." One says hearsay evidence violates the 6th Amendment because a person can't confront or cross examine the witnesses against him or her. The other ruling held that if a defendant likely committed a crime making it impossible for a victim to testify, statements given to law enforcement officials are admissible — especially in domestic violence cases.

In this case, it's been mostly relatives, investigators and clergy on the witness stand. Drew Peterson's attorney Joel Brodsky says the Illinois law won't stand.

"It's unconstitutional and also a violation of an ex post facto," says Brodsky. "A law that's passed in 2008 cannot affect the prosecution of an alleged crime that took place in 2004."

Brodsky presented one witness during the hearing, a pathologist who said Kathleen Savio's death was an accident. Brodsky and some legal analysts also argue that a judge deciding to allow hearsay in Peterson's trial is like finding a defendant guilty before a trial even begins. Whatever the ruling, it's expected the state's so-called "Drew's law" will be challenged.