Accessibility links
Los Amigos Invisibles: A 'Commercial' Breakthrough The Venezuelan band has found huge success in its native country. But the group has also built a following in the U.S. with its unique blend of disco, jazz, funk and Latin rhythms. Here, host Michel Martin talks with the Latin Grammy-winning band, which recently stopped by NPR for a performance and conversation. 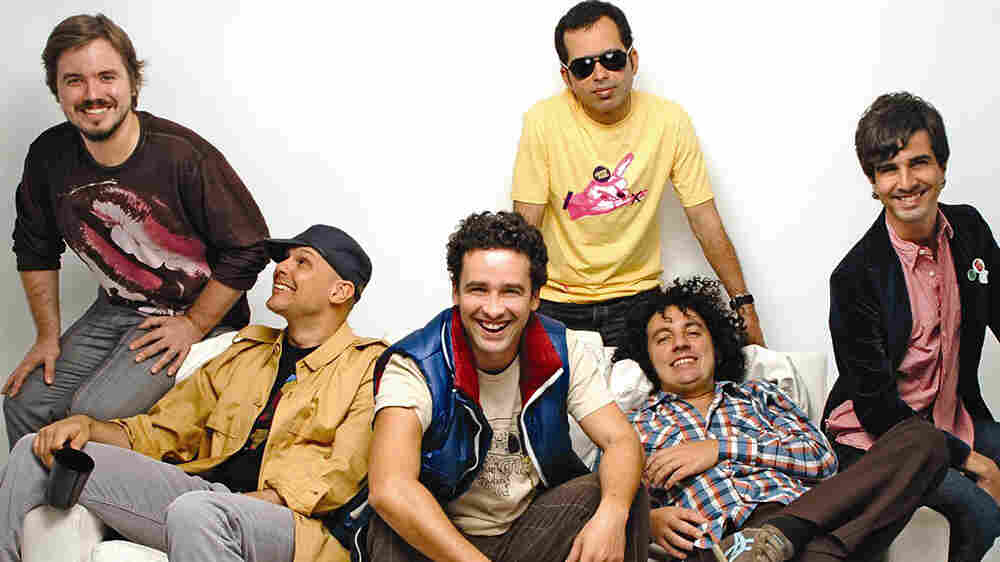 The hit Venezuelan band Los Amigos Invisibles began as an underground group of Caracas musicians who played a mixture of funk, disco and Latin grooves. But, unlike many of their counterparts on the local music scene, they opted not to take common cues from salsa or hard rock. Instead, they focused on making music similar to what they heard from the U.K., home to bands they admired as part of the so-called acid-jazz movement: Brand New Heavies and Jamiroquai, among others.

The band recently stopped by NPR for a performance and conversation with host Michel Martin.

The band got its big break in 1997 after a move to New York, where it caught the ear of David Byrne, former frontman for the influential American rock group Talking Heads. Byrne immediately recognized the group's wide appeal and signed it to his record label, Luaka Bop.

So far, it looks as though Byrne's assessment was right on the money. Los Amigos Invisibles has recorded five studio albums, the most recent of which is titled Commercial. The project is a noticeable departure from its previous music, which had no shortage of catchy hooks and pop arrangements.

The group says the change in style was not by accident, nor was decision to name the latest project Commercial. It's a tongue-in-cheek reference to band's former musical self.

Already, Commercial has seen success. In November, the album won a Latin Grammy for Best Alternative Album. The group members say it was a great win for their home country of Venezuela.

"People got really excited about it," guitarist Cheo Pardo says. "The fact that Venezuela was so happy for us, and that we became [so] great for our country, it was really beautiful."

Pardo says the eruption of national pride inspired by the Grammy win resonated with them. They say the support was especially touching, given the extensively reported political divisions that have become associated with their native country. For this reason, they say, they make a conscious effort to avoid mixing politically fueled themes into their songs.

"We [get] really tired ... talking about politics," vocalist Julio Briceno says. They made a decision that, when it comes to music, "we're going to talk about something else," he adds.