Accessibility links
South Park Celebrates 14 Years Of Fart Jokes The bawdy, crudely animated sitcom South Park is about to celebrate its 200th episode. Creators Trey Parker and Matt Stone go behind the scenes of some of their favorite episodes and explain how they come up with the weekly parodies. 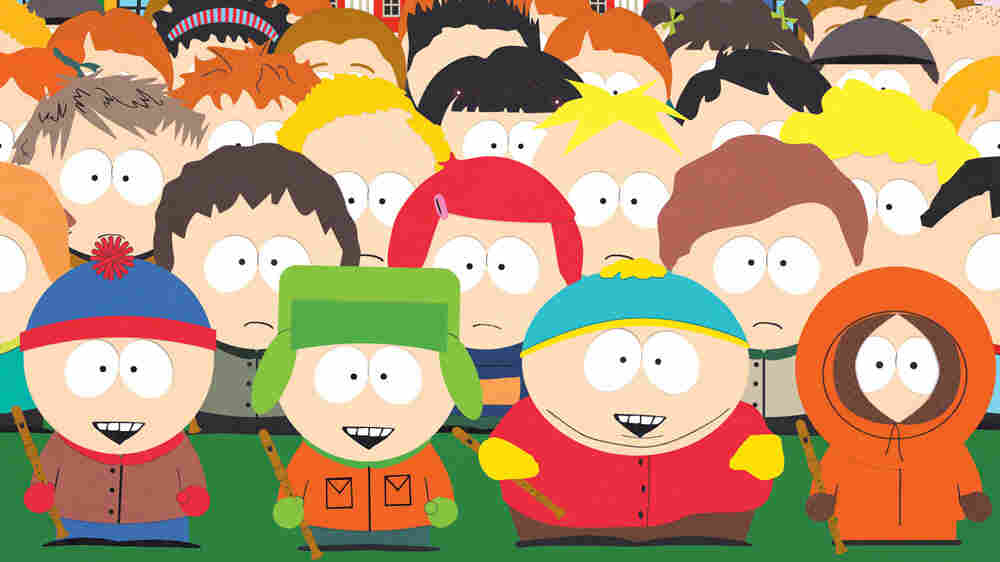 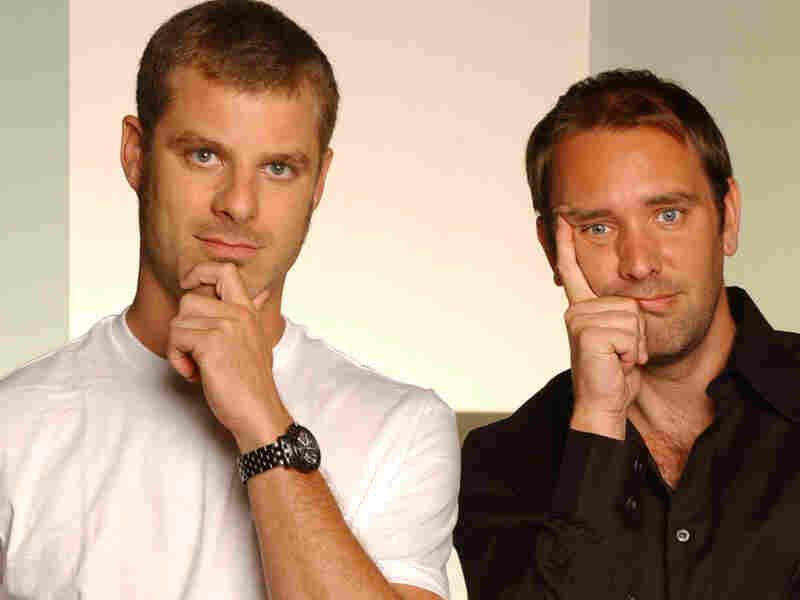 While in college, Matt Stone (left) and Trey Parker wrote and directed a black comedy called Cannibal! The Musical. A Fox executive saw the film and commissioned the duo to create an animated short, which eventually led t Michael Yarish/Courtesy of Comedy Central hide caption 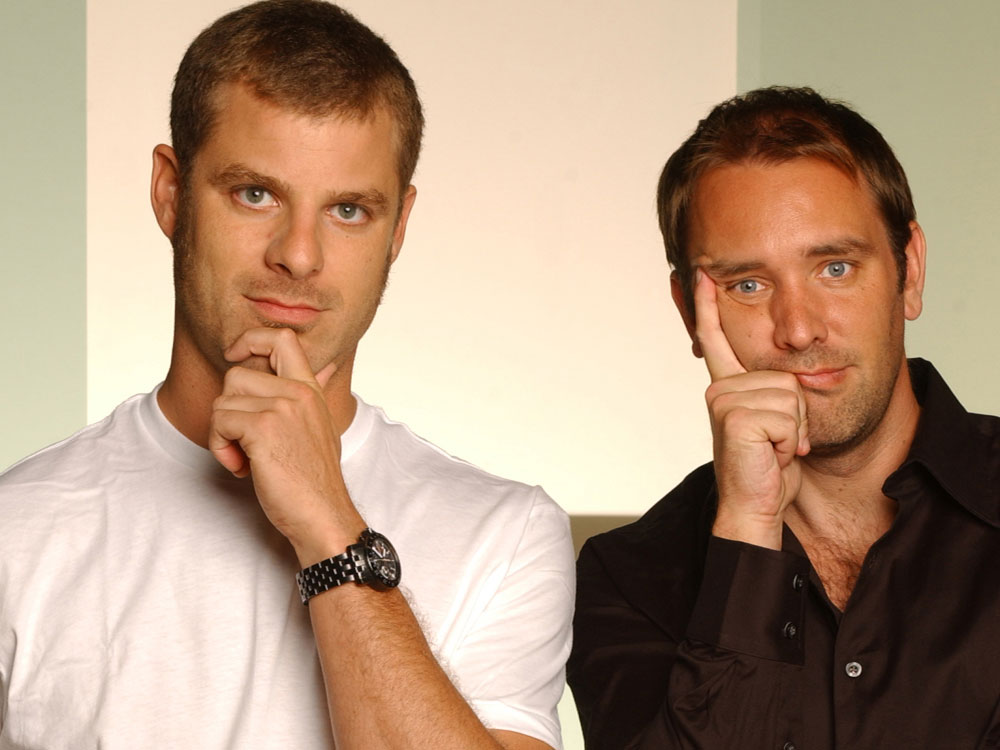 While in college, Matt Stone (left) and Trey Parker wrote and directed a black comedy called Cannibal! The Musical. A Fox executive saw the film and commissioned the duo to create an animated short, which eventually led t

In February, the Senate Armed Services Committee discovered that the private security firm Blackwater had diverted hundreds of AK-47s and pistols from a U.S. weapons bunker in Afghanistan to Afghan policemen. Whoever signed for the weapons from Blackwater did so under a fake name: Eric Cartman.

Cartman is, of course, one of the characters on Comedy Central's South Park, the animated sitcom that's been satirizing everything in the news and pop culture for the past 14 years. Created by Trey Parker and Matt Stone, South Park follows the adventures of grade-schoolers Cartman, Stan Marsh, Kyle Broflovski and Kenny McCormick — while tackling topics like gay marriage, Scientology and Terri Schiavo along the way.

When Parker and Stone heard about the Blackwater incident, they both had the same thought: How quickly could they parody the incident on an upcoming episode?

"I think our first instinct is always, 'How do we put this in the show?' " Parker explains to Terry Gross. "Anytime we read anything remotely interesting we try to think how we can put it in the show."

Finding a way to sneak black-market arms trading into a cartoon about fourth-graders from Colorado wasn't exactly a challenge: For Eric Cartman — South Park's resident racist, anti-Semitic, power-hungry sociopath — gun running is a more likely after-school job than a paper route. Sure enough, a promo for South Park's 14th season showed Cartman signing for a shipment of 500 AK-47s. Playing off topical events, explains Parker, is something that South Park writers try to do on a weekly basis.

"Because of the nature of our show, a lot of people by now kind of know [that] we really do the show almost like a live show," explains Parker. "Like an SNL kind of schedule. We come in on a Thursday and then that episode airs the next Wednesday. And so in our show what happens that week ends up going on in the show."

Occasionally, their parodies have also become major news stories. In the episode "Trapped in the Closet," Stan Marsh joins the Church of Scientology, whose members believe he is the reincarnation of church founder L. Ron Hubbard. After the episode ran once, Parker and Stone were called into a meeting with Comedy Central's executives.

"We're pretty sure [it was Tom Cruise's people] who asked for the episode to be pulled," says Parker.

Chimes in Stone: "We can't legally say that, but we're pretty sure it was."

"Trapped in the Closet," which was nominated for an Emmy Award in 2006, has become one of South Park's most popular episodes of all time.

Also through the years, we got really into the writing side of it. Like, we never sit in our writers' room and crack jokes. We really sit there and try to think through stuff that is just cool over the whole 20 minutes.

"As soon as that was pulled out of rotation, message boards started figuring it out and it became a news story," says Stone. "And we didn't have to do anything."

"So it's really interesting," chimes in Parker, "that the Internet really kind of broke that story."

On the Family Guy episodes of South Park, "Cartoon Wars Part One" and "Two," which feature a controversial illustration of the Muslim Prophet Muhammad

Trey Parker: "There's an image of Muhammad in the head credits of South Park which is in like every episode of South Park that airs in like 100 countries and it airs in syndication all over the country. And so [Comedy Central executives said] you cannot show an image of Muhammad. And so we said 'OK. So we're going to do it again [in another episode].' But then we said, 'Well, we could get attacked by terrorists if we do that so let's make it look like it's not us.' So then that gave us the whole idea for the show where we would put Family Guy in the show and only have Muhammad appear in the Family Guy parts so if they ever saw a still of it on the Internet or if they ever saw anything, they'd know it was Family Guy and not us. And then they would get bombed and not us."

On whether they've changed over the 14 seasons

Trey Parker: "I would love to say yes, but I don't think we've grown up. We're still basically doing fart jokes. Thanks for rubbing it in our face. It's just really funny when we look back at Seasons 3 and 4. We used to look back at Seasons 1 and 2 and just be like 'Oh. Oh my god. We had no idea what we were doing. That's not funny. That's not well-written.' Because it was really through the process of doing the movie — especially, like, the South Park Movie — and then doing other stuff like that where we learned really how to be writers. We didn't really know how to do that. We were just faking it. And also through the years, we got really into the writing side of it. Like, we never sit in our writers' room and crack jokes. We really sit there and try to think through stuff that is just cool over the whole 20 minutes. And we get into that stuff more now than we did when we were 26."

The Emmy-winning episode "Margaritaville," which aired in March 2009, recasts the economic crisis as a biblical allegory: Stan's father, Randy, becomes a prophet who urges the townspeople to save money lest they anger the economy, while Kyle (in the role of Jesus) tells everyone to spend money. Meanwhile, Stan tries to return a Jimmy Buffett-themed margarita machine that was purchased on a payment plan — a metaphor for the subprime mortgage crisis. Stan learns that the debt for the mixer has been consolidated and sold many times; eventually he learns — from members of the U.S. Treasury — that his slushie machine is valued at $90 trillion.

Trey Parker: "The way we do shows is way more kind of sculpting. We'll start on Thursday or Friday and we started doing more of the God-metaphor first and as that kept going, it got kind of trippier and trippier, and we were like 'All right. We need something to just be a runner through this that's more present-day what's going on --"

Matt Stone: "And that scene, it's definitely like, your whole life you're told if you just put money in the bank, it'll go up in value."

On the importance of fart jokes to third-graders