Accessibility links
After 'The Wire,' Taking On New Orleans In 'Treme' David Simon and Eric Overmyer met when they worked on the TV series Homicide: Life on the Streets. They also worked together on Simon's acclaimed HBO series The Wire. Now they have a new series called Treme — about the musicians and other locals rebuilding their lives after Hurricane Katrina. 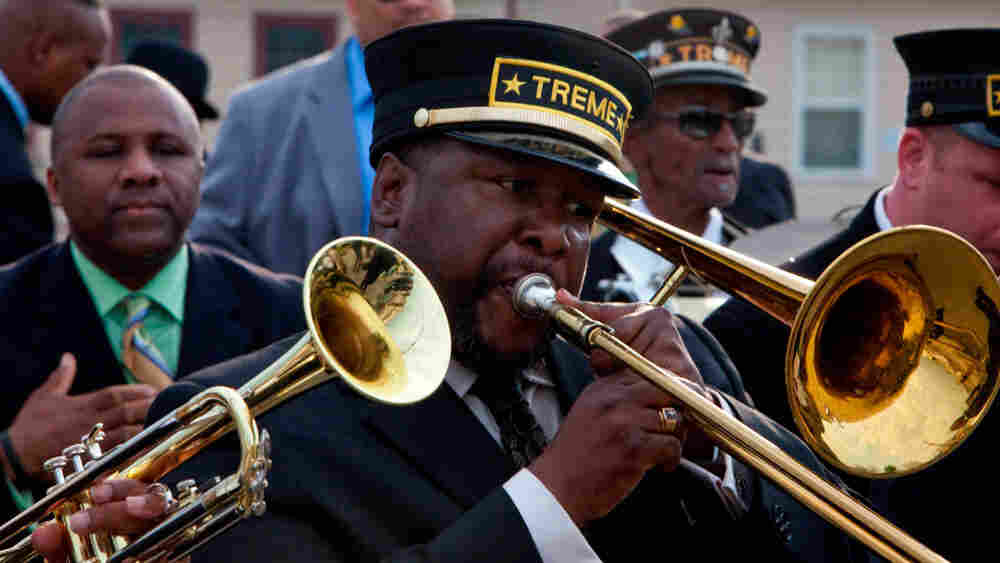 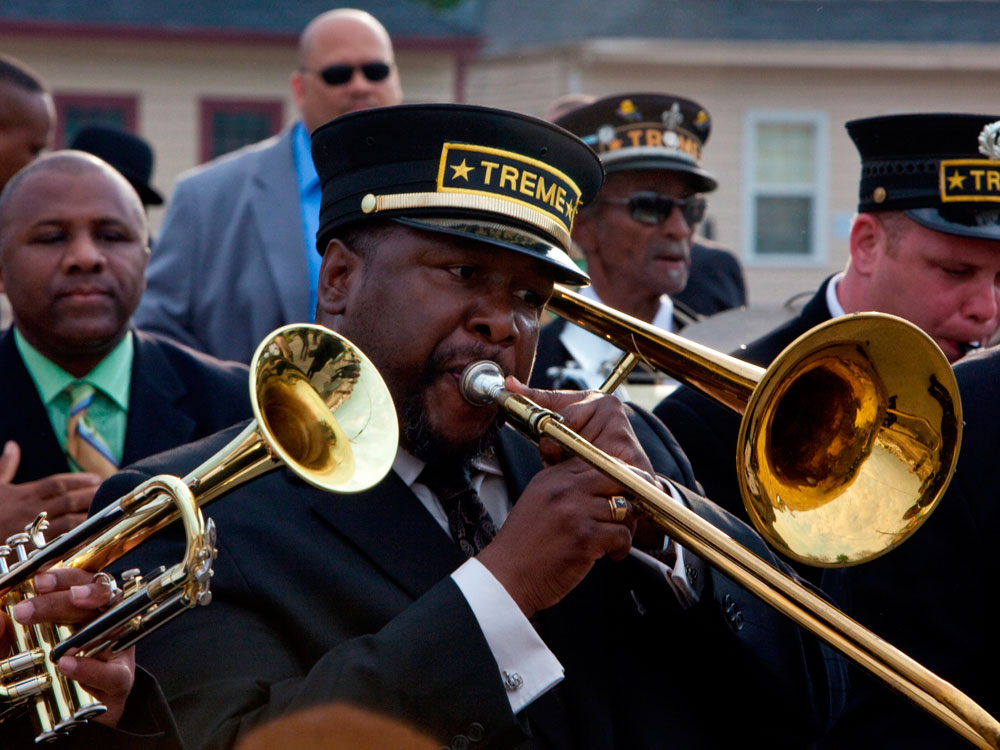 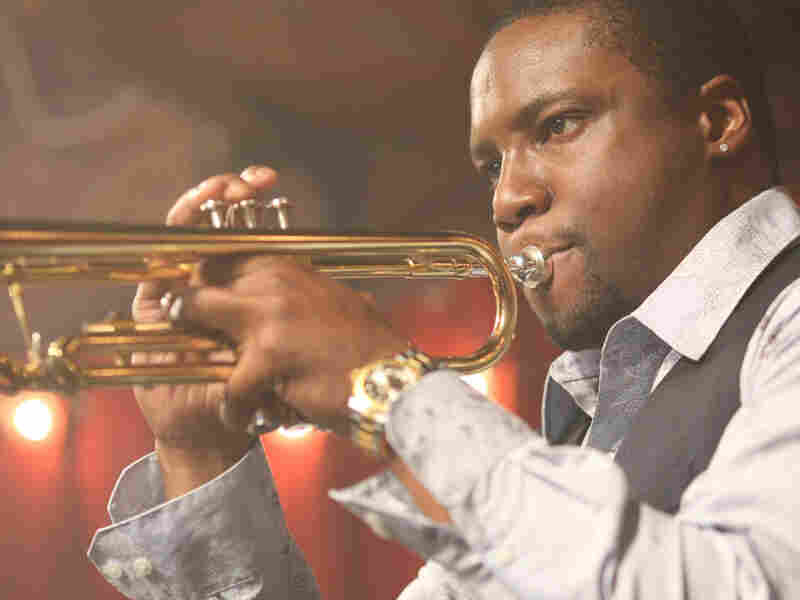 Rob Brown plays Delmond Lambreaux, a jazz trumpeter living in New York City — and trying to eke out a future outside New Orleans. His father, Albert Lambreaux, is played by Clarke Peters, who was Lester Freamon on The Wire. Paul Schiraldi/HBO hide caption 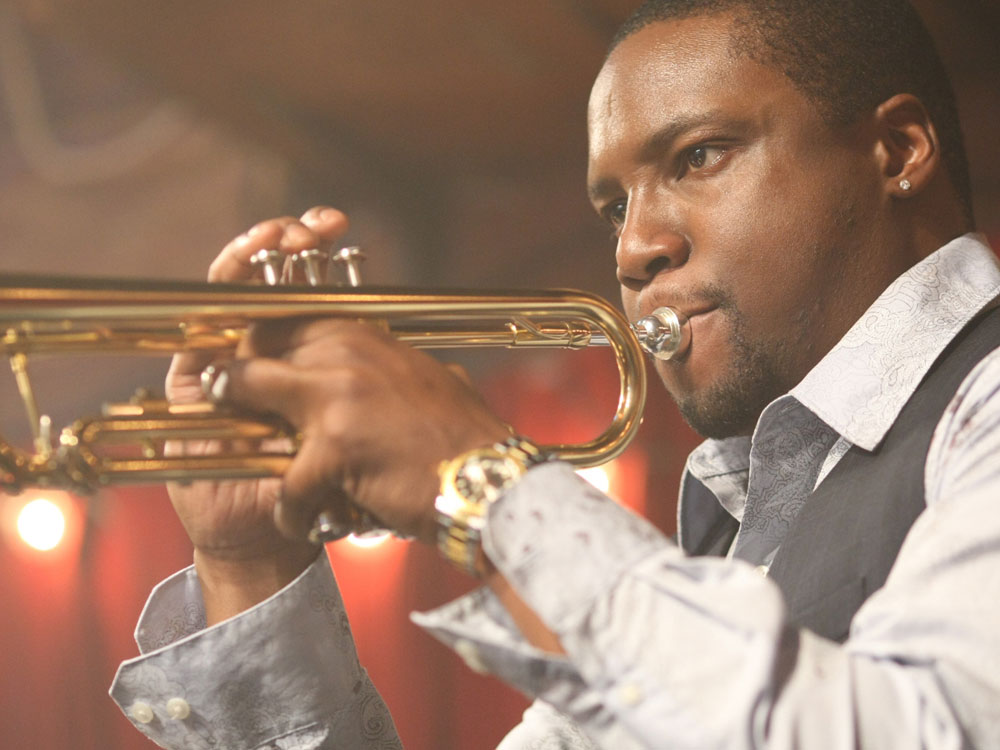 Rob Brown plays Delmond Lambreaux, a jazz trumpeter living in New York City — and trying to eke out a future outside New Orleans. His father, Albert Lambreaux, is played by Clarke Peters, who was Lester Freamon on The Wire.

David Simon and Eric Overmyer met when they worked as writers on the show Homicide: Life on the Streets. The two men teamed up again for The Wire, Simon's critically-acclaimed HBO series set on the streets of Baltimore. Now Simon and Overmyer have set their cameras on post-Katrina New Orleans, where they have written and produced a new HBO series, Treme.

Unlike The Wire, Treme is not about drugs or rampant corruption among city officials. Instead, the series follows ordinary New Orleans citizens as they attempt to rebuild their lives following Hurricane Katrina. Overmyer tells Terry Gross that the decision to leave the grittiness behind in Baltimore was a conscious choice.

"We spent almost a decade working on The Wire," Overmyer says. "In New Orleans, there's a different story here to tell and we're very intent on that. There are some things that may echo in terms of our production logic, or how we approach doing a show, but it's really a very different story."

Treme's cast of characters includes musicians, chefs and Mardi Gras Indians — all of whom are struggling to rebuild their homes and lives in the aftermath of the hurricane. Two of the characters, Antoine Batiste — a trombonist down on his luck — and Albert Lambreaux, the Mardi Gras Indian chief, are played by veterans of The Wire, Wendell Pierce and Clarke Peters. Simon explains why he recast the two actors in Treme: 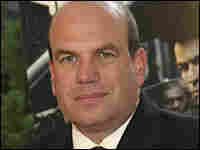 David Simon was a reporter for The Baltimore Sun before becoming a television writer. Scott Wintrow/Getty Images hide caption

"Wendell's family actually lost their home in Ponchartrain Park — in that neighborhood — and he's a native of New Orleans. I think if Eric and I had tried to do this show without Wendell he would have hunted us down. It's just as simple as that," he explains. "And Clarke is a song and dance man with a lot of experience on the London stage ... I saw him do Chicago and Porgy in London. That's the stuff he was never able to do — we didn't really find a use for that stuff in The Wire. He was never able to break into song in the squad room. We knew that that was there."

The Wire on Fresh Air

Simon says that the idea for a drama set in New Orleans came to him long before Hurricane Katrina.

"Eric and I, going back to the time when we worked on Homicide:Life on the Streets together, we talked about [a show set in New Orleans] as being a fantastical notion: one that we liked to imagine ourselves undertaking. ... We used to talk about, 'Well, we should do it,' but then it would always dissolve when we would try to imagine trying to go into some network executive's office in Los Angeles and trying to explain New Orleans."

Katrina, which flooded 80 percent of the city and displaced thousands, exposed the entire country to New Orleans.

Simon agrees. "And tactically you could walk into someone's office in Los Angeles and say 'There's a drama there now.'"

On what they liked about New Orleans

Overmyer: "The music, the food, the way people talk, the street names, the culture — high and low and all points in between, the way the city smells — everything."

On casting real musicians in the show

Simon: "We really had no choice."

Simon: "We're trying to demonstrate what the culture actually is. So while the drama needs to be propelled by professional actors, the raison d'etre of the show is to define New Orleans and you can't do that without addressing yourself to the heart of the music and you can't get anybody to come in and pretend."

Overmyer: WWOZ is so important to the musical culture of New Orleans, we really couldn't do a show about music in New Orleans and not use WWOZ.

Simon: Really, it's the heartbeat musically of the city in some very basic ways.

On integrating the local dialect of New Orleans into the show

Simon: One of the things we did right away, in addition to Eric [Overmyer], we brought in Tom Piazza and Lolis Elie — who are local writers — as ballast to try and make sure the writing staff and the writing room had strong local representation. But at the same time, I wouldn't have wanted everyone in that room to be from New Orleans even if we could have managed that — because in some ways, the city's very seductive. And you can fall in love with a lot of its charms and idiosyncrasies and not be asking yourself the hard questions that drama sometimes requires. And so, actually it was the dynamic of people from New Orleans interacting with George Pelecanos or David Mills in the writer's room, who are outsiders and who are acquiring the culture cold. That's really what gave the piece more gravitas and what helped us ground it."

This interview was taped before David Mills died on March 30, 2010.