Accessibility links
Supreme Court May Lack Protestants, After Stevens Leaves When Justice John Paul Stevens retires, it is entirely possible there will be no protestant justices on the U.S. Supreme Court for the first time ever.

The religious composition of the Supreme Court has undergone a gradual shift since its early days.

With U.S. Supreme Court Justice John Paul Stevens talking openly about retirement, attention has focused on the "who" — as in who is on President Obama's short list of potential nominees. But almost nobody has noticed that when Justice Stevens retires, it is entirely possible that there will be no Protestant justices on the court for the first time ever.

Topic With A Hint Of Taboo

Let's face it: This is a radioactive subject. As Jeff Shesol, author of the critically acclaimed new book Supreme Power, puts it, "religion is the third rail of Supreme Court politics. It's not something that's talked about in polite company." And although Shesol notes that privately a lot of people remark about the surprising fact that there are so many Catholics on the Supreme Court, this is not a subject that people openly discuss.

In fact, six of the nine justices on the current court are Roman Catholic. That's half of the 12 Catholics who have ever served on the court. Only seven Jews have ever served, and two of them are there now. Depending on the Stevens replacement, there may be no Protestants left on the court at all in a majority Protestant nation where, for decades and generations, all of the justices were Protestant.

The first Catholic to serve was Chief Justice Roger Taney, historically famous for writing the Dred Scott decision upholding slavery. After he left, no Catholic was appointed for 30 years. But by the early 20th century, the nation settled into a pattern in which there was one seat on the court occupied by a Catholic, and usually one by a Jew, beginning with Louis Brandeis in 1916. There was no Jewish justice, however, in the 24 years between 1969 and 1993. The 20th century hiatus for Jews began under President Nixon, who, when asked by his attorney general when he was going to fill the Jewish seat, replied, "Well, how about after I die."

Historically, Republicans have been the party of Protestants. But Protestant Republicans — Reagan and both Bushes — appointed five of the Catholics currently sitting on the court: Chief Justice John Roberts and Justices Antonin Scalia, Anthony Kennedy, Clarence Thomas and Samuel Alito.

And what is particularly interesting, as attention focuses on a potential replacement for Justice Stevens, is that the two leading contenders to succeed him, Solicitor General Elena Kagan and federal Judge Merrick Garland, are both Jewish, while another often mentioned name, Michigan's Gov. Jennifer Granholm, is Catholic. Yes, there are some Protestants in the mix, too, but it remains a distinct possibility that when the dust settles and a new justice takes his or her seat, there will be no Protestants on the high court. 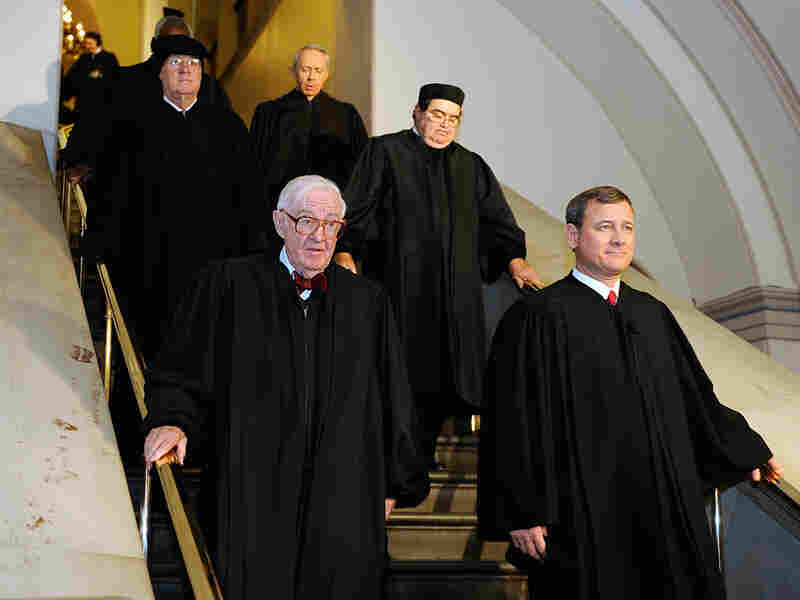 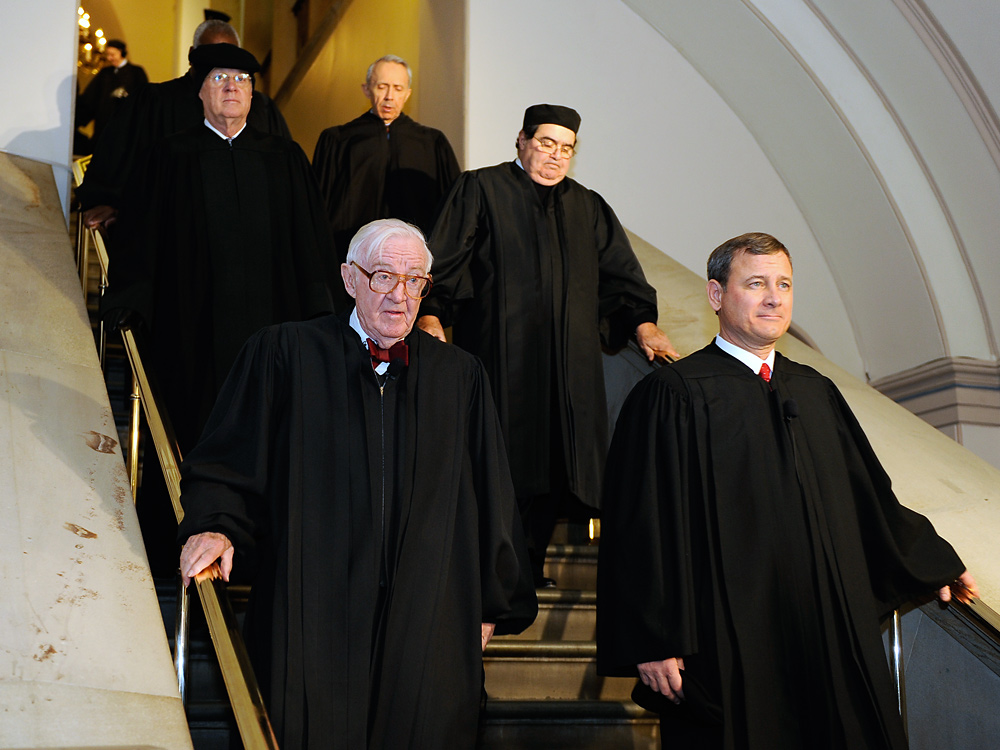 The departure of Justice John Paul Stevens (bottom left) could leave the Supreme Court without a Protestant. In 2009, Justice David Souter, an Episcopalian (at center, in rear), was replaced by Sonia Sotomayor, a Catholic. Here, the justices walk to President Obama's inauguration.

"It would certainly raise a lot of eyebrows," says University of Virginia professor Henry Abraham. "I don't know whether it matters. Speaking idealistically, to me the only thing that matters is competence, quality, education, ability, morals and so forth."

Ave Maria law school Dean Emeritus Bernard Dobranski agrees — but adds, "I think it would certainly raise questions with some people, and some people would be suspicious."

"All of the justices who are on the bench now were appointed because of their constitutional views, and I don't think any of them are allowing their religious views to trump honest, sincere judgments about the Constitution," Eisgruber says. "And I think it's also worth noting that we've had Catholics on the court on both sides of the abortion question."

That's true, but in the past quarter-century, Republican Protestant presidents have appointed conservative Catholics at least in part because of their reliably conservative judicial views.

The children of immigrants, second-generation Catholics, as Jews did before them, have embraced the law as a profession to succeed in. But as Richard Garnett of Notre Dame law school observes, "A whole lot of ethnic Catholics switched sides politically because of the pro-life issue, and so it turned out that for Republican presidents of the '80s, '90s and into the Bush administration, the people who were in the pool, who were available for nomination, and who shared the views of those presidents on some of these important questions, were people who are Roman Catholic."

Garnett contends that the real dividing line in the country is not between Catholic and Protestant. Instead, he says, "it's more the kind of religious versus secular divide.

Religious Diversity And The Selection Process

But others, like Notre Dame history professor Mark Noll, disagree. "Is it a rebuke that there might be no Protestants on the Supreme Court?" he asks. "Indirectly, I suspect it would be."

It would be a rebuke, he says, in terms of what Protestant identity means, and why there wasn't a Protestant good enough to fill even a single Supreme Court seat.

Professor Mark Scarberry at Pepperdine law school, a self-described evangelical Protestant, says there should be no religious test for appointment.

"But I don't think that that means that a president shouldn't pay at least some attention to religious diversity on the court," he said. "It does seem to me that when you have such a large part of the country that has a particular sort of religious worldview, if there is no one on the court who is able to understand that worldview in a sympathetic way, then that creates difficulties."

And is this a subject that a nominee should or could be asked about? "I think that all hell would break loose," says Abraham, of the University of Virginia. "I cannot imagine that being brought up openly. Covertly, perhaps in some ways — but it's a highly delicate problem."

Indeed, all hell did break loose during the Bush administration, when some Democrats asked a Bush appeals court nominee whether he could enforce the right to an abortion, even though he had called Roe v. Wade an abomination responsible for "the slaughter of millions of innocent unborn children."

The Democrats who asked the question found themselves pilloried in TV and radio ads for being "anti-Catholic," even the ones who were lifelong observant Catholics.

An initial version of the chart entitled "A Shifting Court" contained errors in properly classifying some justices as Protestants. The errors have been corrected.