Accessibility links
The Quiet Deaths Outside The Coal Mines While mine disasters like last week's deadly explosion in West Virginia are certainly tragic, black lung disease claims roughly 700 miners' lives each year and gets far less attention. The disease has been on the rise in recent years, possibly because miners are working longer hours, with more exposure to coal dust and other toxic materials. 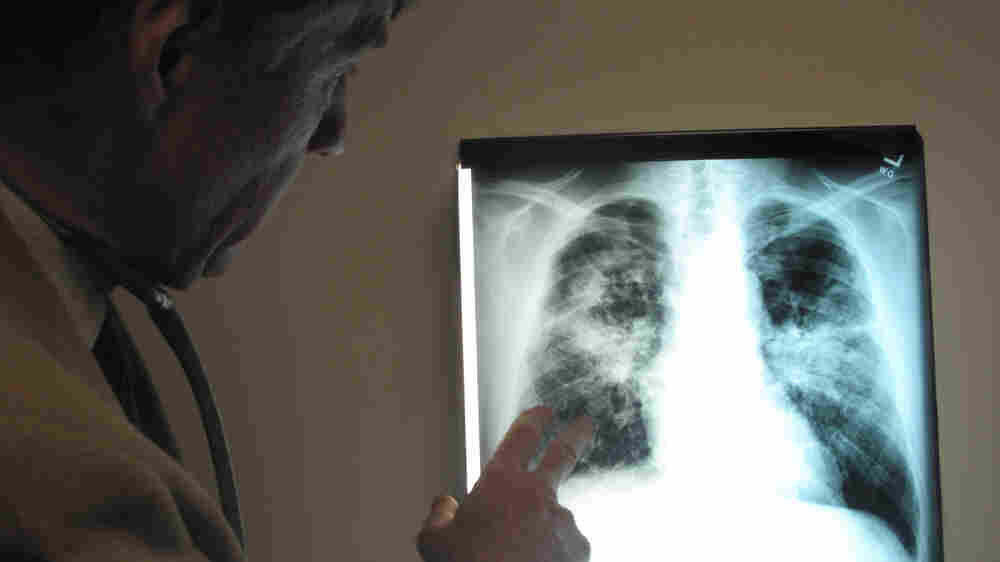 Dr. Randy Forehand looks at a scan of a patient with an advanced case of black lung. Brenda Wilson/NPR hide caption 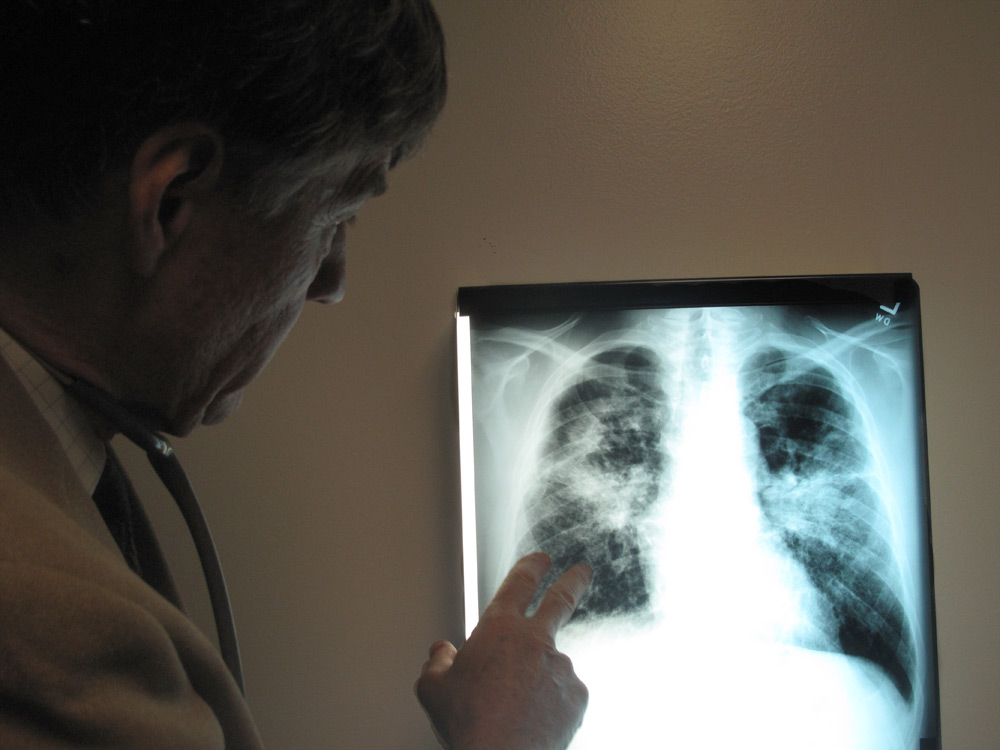 Dr. Randy Forehand looks at a scan of a patient with an advanced case of black lung.

Mindful of the grief and anger surrounding the death of the 29 miners at the Upper Big Branch mine in West Virginia, public health analyst Anita Wolfe, who works for the National Institute of Occupational Safety and Health, chooses her words carefully. As the daughter of a miner living in West Virginia, she knew some of the men who died.

However, she's on a mission. Pointing to a graph that shows miner fatalities in 2004, she notes that 28 miners died that year because of mine safety problems. More than 700 died from coal worker pneumoconiosis — more commonly known as black lung. Experts say that over the past five years, the disease has been hitting workers at younger ages and progressing more rapidly.

"When something like what happens at the Massey mine happens," Wolfe says, "it gets immediate attention because it's an immediate death. We have 29 miners now that were here yesterday, and they are not here today. We also have over 700 miners who every day are living with black lung and are dying a slow agonizing death."

Mining, getting coal out of the earth, makes dust — a lot of dust. It clings to everything — the clothes, skin and face. It seeps into the lungs. As the dust collects in the lungs, scar tissue forms, hardens, reducing the flexibility of the lungs. That means less oxygen is circulating. Breathing becomes more difficult. 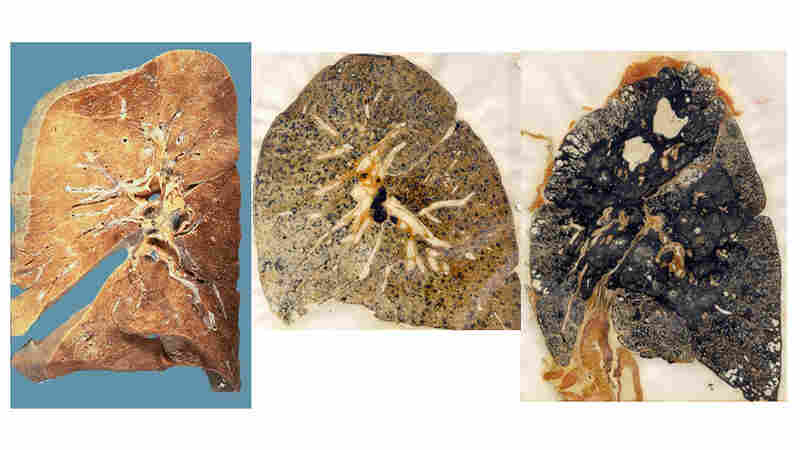 These human lung samples show (from left) a normal lung, a lung with mild pneumoconiosis or "black lung" and one with complicated pneumoconiosis. NIOSH hide caption

'Black Lung' On The Rise

At the Tug River Clinic in Gary, W.Va., there's a large black bow tied around the post on the porch near the entrance, and the flag is flying at half staff. It's a busy day, the day the pulmonologist, Dr. Randy Forehand, screens for black lung. He holds up an X-ray. The coal dust in the lung forms clusters of little white dots that get brighter and whiter as the disease turns into progressive massive fibrosis.

More Deaths From Black Lung Than Mine Accidents

With less people working the mines, the overall deaths from black lung have declined, even as the percentage of workers with black lung has increased.

"This gentleman is probably going to require a lung transplantation," Forehand says. As he flips through a stack of the X-rays, he says, "There was a time it might have taken me six, seven, maybe 10 years to accumulate this [many]. This has taken me about six months."

In the 1990s, black lung reached a low point. Mike Attfield, an NIOSH epidemiologist in the West Virginia office, says five years ago, researchers noticed that the rate of black lung cases suddenly increased. And if coal dust really is at the levels that are being reported, Attfield says, the rate of black lung is far higher than it should be.

It isn't exactly clear why there was a rise in black lung cases after a number of decades of decline, but Attfield says there are a number of possible explanations. Although the rate of black lung is going up, there are fewer miners with the disease.

Indeed, fewer miners are needed in an industry that has become increasingly high-tech. Coal production continues to climb even with fewer miners. "Production has gone very high compared to the old days," Attfield says. "When you're producing a lot of coal, you're making a lot of dust."

Not only is there more dust, but those miners also are working longer hours, he says. If they're working a 12-hour shift instead of an 8-hour shift, he says, that's 50 percent more coal dust. It also means there's less time away from the mine to cough the coal dust out of their lungs.

In a study of miners in eastern Kentucky and southwestern Virginia in 2006, Attfield found that 4 percent of 1,000 miners tested had advanced pneumoconiosis.

The tri-state area of Kentucky, Virginia and southern Western Virginia is among NIOSH's "hot spots" — areas with the highest rates of black lung.

Richer coal reserves have been depleted or mined out. What's left in these areas are thinner seams that Attfield says may pose a greater risk to health, particularly if dust regulations haven't been adjusted to accommodate increased exposure. And the dust from thinner-seam mining can be more toxic.

"Thinner-seam mining is much more difficult to do," Attfield says, "because you're often cutting the rock that's adjacent to the coal seam, where you didn't have to do that before. That adjacent rock contains silica in many cases, and silica — the way it's regulated — is about 20 times more toxic than coal mine dust."

That raises questions of whether mining companies are monitoring silica and coal dust levels and keeping them at appropriate levels, and whether those levels are low enough.

After each mining disaster, the government makes a commitment to mining safety, just as President Obama has ordered the federal government to investigate last week's explosion at Massey Energy's Upper Big Branch mine. The regulations governing mine safety and health — enforced by the Mine Safety and Health Administration — followed the Farmington, W.Va., mine disaster in 1968, when 78 miners died in an explosion.

Those new regulations called for periodical mine inspections to monitor coal-dust levels and to make sure protective equipment, such as respirators, was being provided. 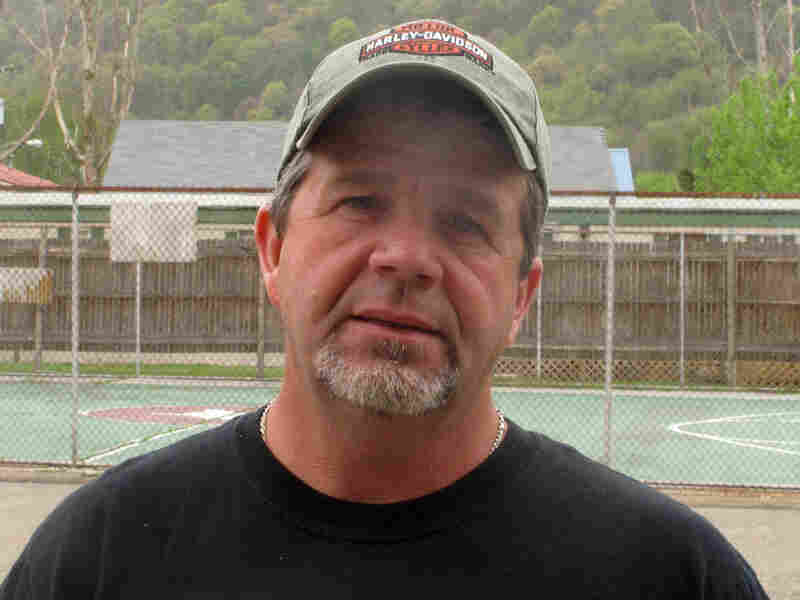 David Neil was diagnosed with black lung eight years after he started working in a mine. Experts say the disease is hitting workers of younger ages and progressing more rapidly. Gisele Grayson/NPR hide caption 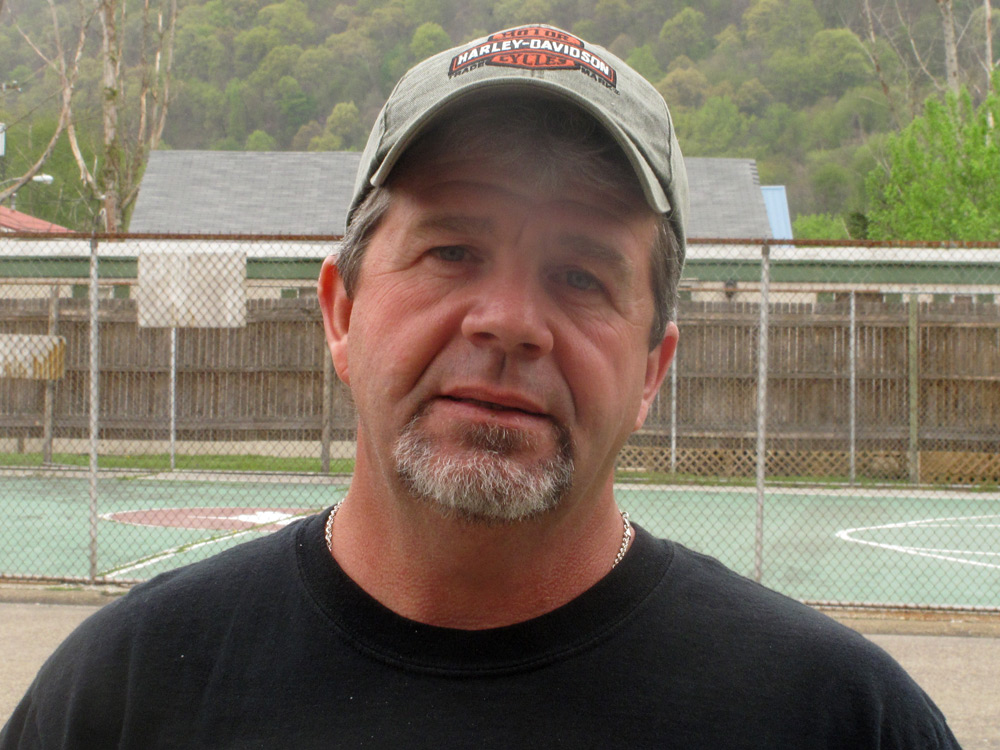 David Neil was diagnosed with black lung eight years after he started working in a mine. Experts say the disease is hitting workers of younger ages and progressing more rapidly.

Miners joke that the monitors are hung near mine openings or entries, where dust levels are low. Despite the industry's efforts to develop equipment that is comfortable and effective, miner David Neil says the miners find it almost impossible to breathe while wearing respirators because the gear becomes clogged with coal dust.

There's "a lot of rock dust, a lot of coal dust," Neil says. "It didn't really do much good to wear a respirator. You couldn't keep the filters from stopping up."

For eight years, Neil worked underground on his hands and knees in a space no more than 3 feet high. A miner with black lung may have no symptoms at first, but it catches up with them. When he got a chance to get out of underground mining, he did. Shortly afterward, he says, he started having problems with his chest. He was told to get checked for black lung.

"That's when I went and found out that I had it," he says. Just this year, "I got another chest X-ray, and they said it's gotten worse."

Black lung used to be thought of as an old man's disease, but Neil was diagnosed in his 30s. Mining seemed like a good deal. He was making good money and starting a family. So, he just didn't think about it. He moved to mountaintop, or surface mining, but he found he couldn't get away from the coal or rock dust.

At NIOSH, Anita Wolfe is seeing cases of black lung in men who have only been in the mines for five to eight years. There's no cure for black lung. She drives throughout the mining hot spots year round, trying to get miners to voluntarily get screened for black lung. Most are reluctant, she says, because they fear that their companies will find out and they will lose their jobs. In West Virginia, one of the poorest states, very few jobs are as lucrative as mining.