Accessibility links
What's The Deal With Iceland? Ash from an Icelandic volcano is causing big and costly disruptions in Europe but, so far, it's nothing compared with the havoc caused by the country's economic eruption a year and a half ago. How can a remote island in the North Atlantic, with only about 320,000 people, be the source of so much damage?

What's The Deal With Iceland?

What's The Deal With Iceland? 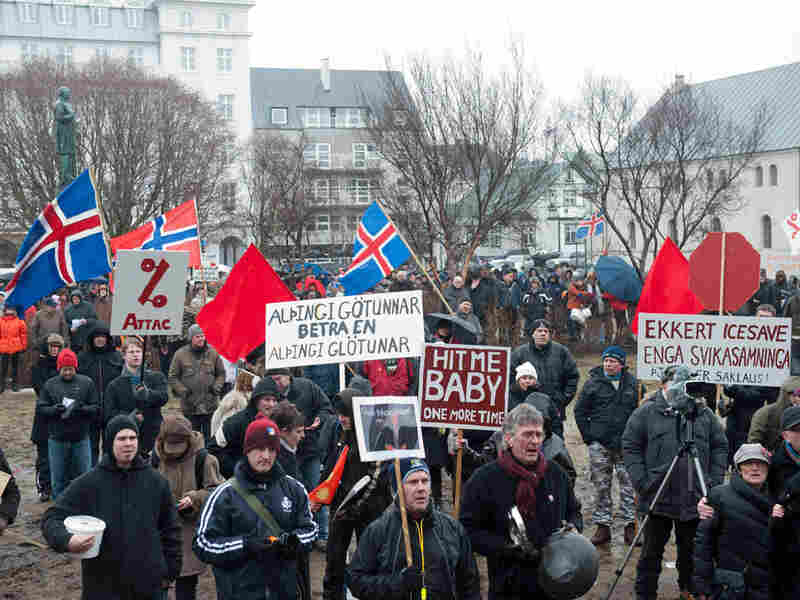 Angry protesters demonstrate in front of the Icelandic Parliament in March. Voters rejected a plan that would have forced the country to pay for the losses of savers in the United Kingdom and the Netherlands. Halldor Kolbeins/AFP/Getty Images hide caption 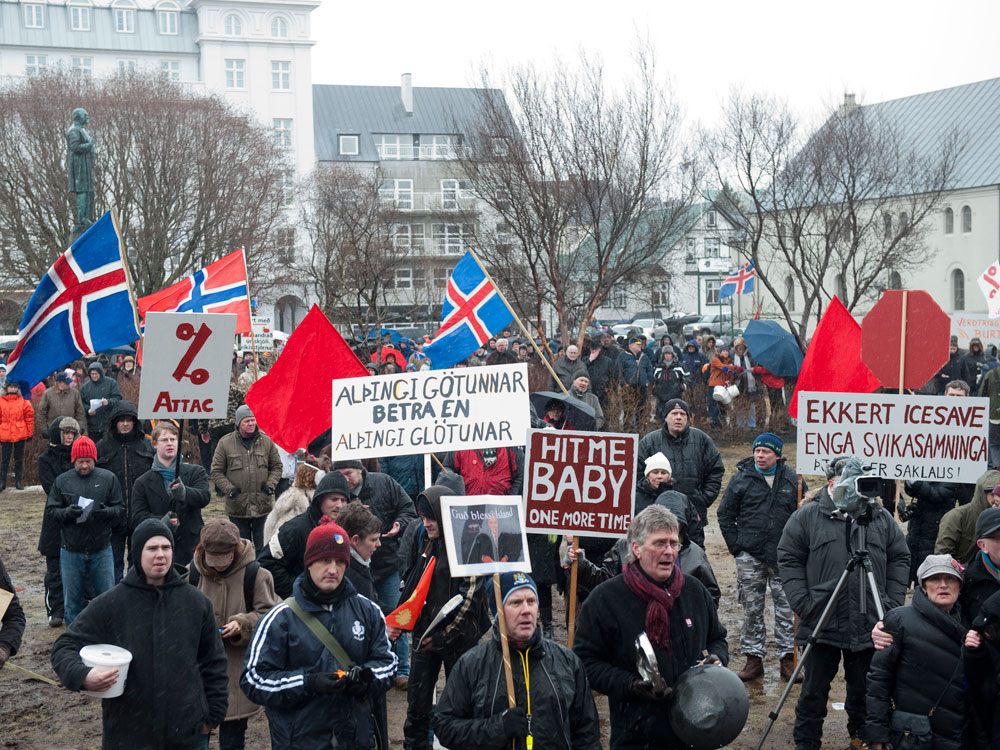 Angry protesters demonstrate in front of the Icelandic Parliament in March. Voters rejected a plan that would have forced the country to pay for the losses of savers in the United Kingdom and the Netherlands.

Iceland's latest volcanic eruption and the cloud of ash drifting over Europe are proving to be hugely costly and disruptive but, so far, the effects are mild compared with the havoc caused by the country's economic eruption just a year and a half ago.

As if on cue, Iceland's Eyjafjallajokull volcano erupted in the same week as the release of a long-awaited report from the investigation into the country's financial collapse.

The collapse of Iceland's major banks in late 2008 helped herald the start of the worldwide financial crisis. It brought the country's government to the brink of bankruptcy and wiped out billions of dollars worth of savings for bank customers in other countries.

What is it with Iceland? How can a remote island in the North Atlantic, with only about 320,000 people, be the source of so much damage?

2. Vikings — Leifur Eiriksson, Eirik the Red and the rest of the bearded band were among North America's early tourists.

3. Geothermal Energy — With more than 70 percent of its energy coming from renewable sources, Iceland is headed for energy independence.

4. Sagas — These timeless medieval tales showcase the exploits of explorers and adventurers of valiant heroes.

5. Wool — Legendarily soft and warm, the sheepish stuff is perfect for fishermen's sweaters and fashionable shawls.

6. Glaciers — Though they are shrinking, glaciers still cover more than 11 percent of the country.

8. Hakari — Made of rotten shark, this Icelandic dish is an acquired taste.

10. Halldor Laxness — The late Icelandic novelist copped the Nobel Prize for literature in 1955.

This week's report accuses Iceland's former prime minister and other top officials of "gross negligence" for failing to intervene as the country's three biggest banks took on the excessive debt that eventually sucked them under.

The investigation was carried out by a commission appointed by Iceland's Althing, or Parliament. The lawmakers must now decide whether to take legal action against former Prime Minister Geir Haarde and other top officials.

Meanwhile, Iceland's economy remains mired in recession and experts say it could be years before the country recovers.

"The country is still in crisis," says Fridrik Mar Baldursson, a professor of economics at Reykjavik University. He says foreign investment in Iceland has dried up, largely because of uncertainty over whether Iceland will get the next installment of a crucial loan from the International Monetary Fund.

Iceland's bank meltdown began in late 2008, not long after the collapse of Lehman Brothers in the United States. The country's three biggest banks collapsed and were taken over by the government, which found itself with a combined debt that was many times the size of its entire economy.

The problem might not have been so serious if it were confined to Iceland. But the crisis was compounded by the fact that Iceland's banks had been snapping up assets around the world.

The country's biggest bank, Landsbanki, had also been offering online savings accounts, through a subsidiary known as Icesave, to hundreds of thousands of customers in the U.K. and the Netherlands.

When the bank went belly up, those customers saw their savings wiped out.

The British and Dutch governments eventually stepped in to compensate their citizens who lost money in Icesave, but now they want the Icelandic government to pay them back a total of $5.3 billion. They argue that the government of Iceland was obligated to guarantee at least part of those savings accounts, much as the Federal Deposit Insurance Corp. guarantees bank accounts in the U.S.

The Icelandic public resents what it sees as a punitive demand for repayment by the British and Dutch. In a national referendum in March, Icelanders rejected a payment plan negotiated by the government.

Last year, the IMF and the Nordic countries of Finland, Norway and Denmark agreed to help bail Iceland out with a loan package worth about $4.5 billion.

The IMF's contribution is being delayed, in part because of Iceland's dispute with the U.K. and the Netherlands. The IMF's board is expected to meet Friday to review the issue and decide whether to pay out more of the loan. That would free up more of the money from the Nordic countries as well.

In the meantime, says Baldursson, much of Iceland's economy is at a standstill.

"Iceland in many ways is very fortunate," he says. "We have a lot of natural resources — geothermal and hydroelectric energy — and there's a lot of foreign interest in investing in energy projects, but the markets don't want to lend money until the disputes are resolved." 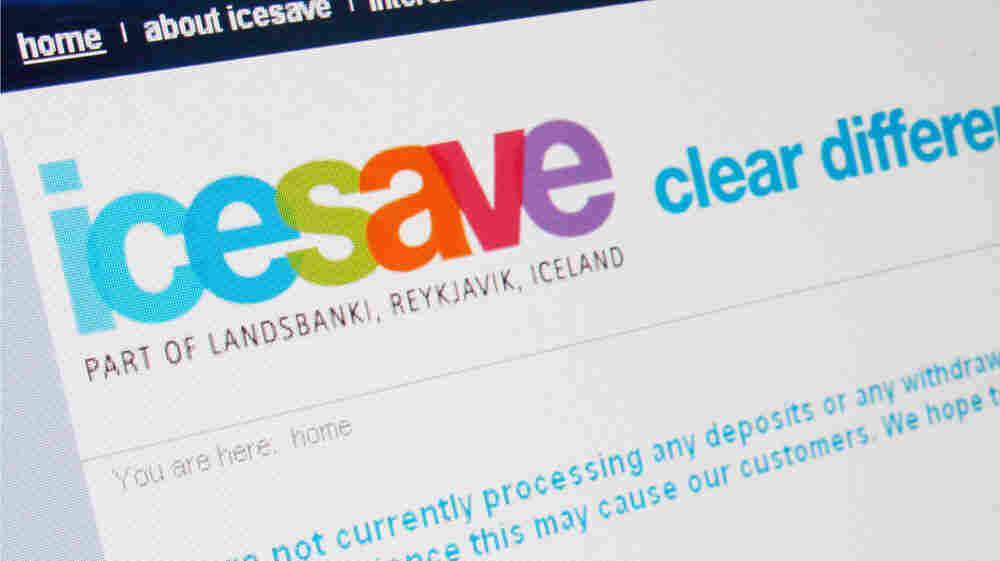 Oddly, Baldursson says that to look at Reykjavik today, a foreigner wouldn't necessarily know that there's a problem.

"If you didn't know there was an economic crisis," he says, "you might think, 'What a thriving country!' "

He says the tourism sector is still strong, though that could be affected if volcanic ash continues to shut down travel across the North Atlantic. At around 9 percent, unemployment is considered extremely high for Iceland, "but most people are still employed, so they're getting by," Baldursson says.

Baldursson says that so far, the latest volcanic eruption has caused relatively little economic damage in Iceland itself.

"The eruption is not in an area where there's a big risk," he says. "Most of [the ash] is falling on other countries — most of it seems to be accruing on the U.K."

Can You Say 'Eyjafjallajokull'? Icelandic Volcano's Name Is A Tongue-Twister April 16, 2010
Iceland Volcanic Activity Could Go On For Months April 16, 2010
Despite 'No' Vote, Britain Expects Iceland To Pay March 8, 2010
Iceland's Stoic, Sardonic 'Independent People' May 4, 2009