Accessibility links
Nat King Cole: An Incandescent Voice What defined Nat King Cole's greatness, and his groundbreaking success, wasn't his piano playing; it was his voice. 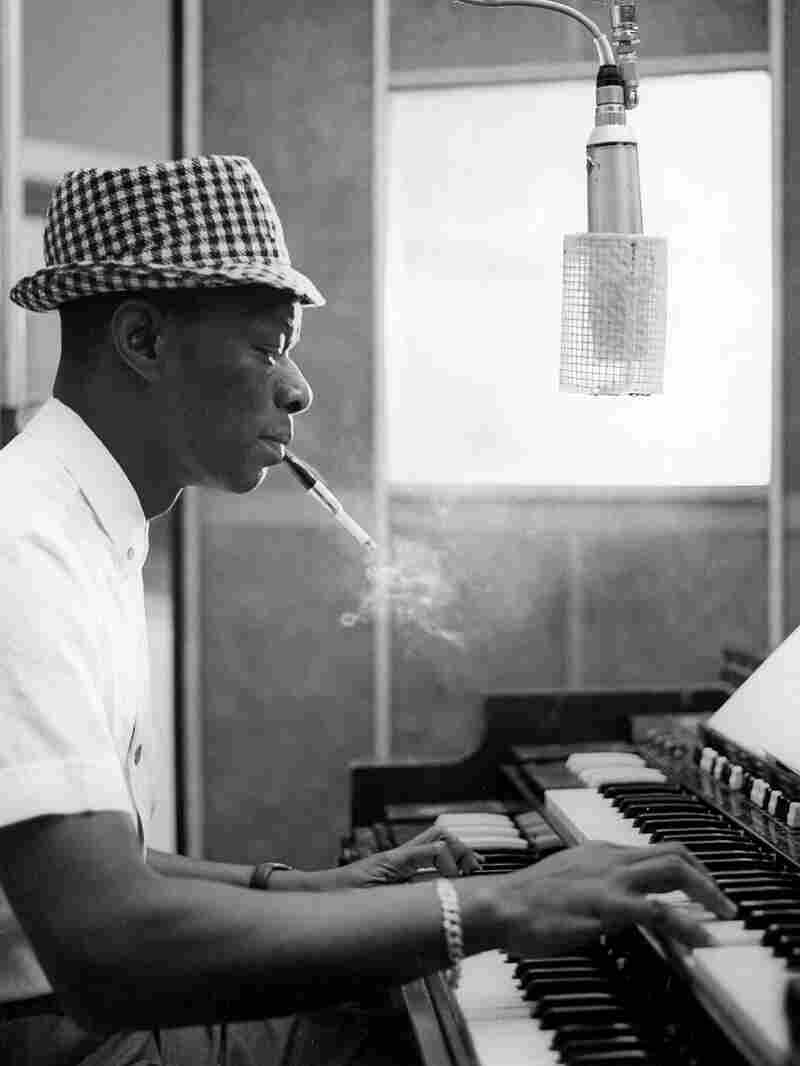 He started out playing jazz piano, and he was one of the best. His trio — piano, bass and guitar — turned rhythm and melody into a seamless mix. For that alone, we would celebrate Nat King Cole.

But what defined his greatness, and his groundbreaking success, wasn't his playing. It was his voice.

Nat King Cole's voice was liquid, soothing. His pitch was impeccable. And there's a word you hear a lot when people talk about Nat King Cole: relaxed.

"When you start listening to him, one of the most important things is he keeps you relaxed," says Cole's younger brother, Freddie Cole.

"The amazing thing about Nat's voice is that it has this kind of incandescent quality to it," music historian Will Friedwald says. "It's like some kind of magic spell is being cast."

And singer Aaron Neville: "He just hypnotized me. It was like medicine to me. If I had got a spanking or something that day, Nat would smooth it all out."

Nat King Cole was born Nathaniel Adams Cole in 1919. He grew up in Chicago, the son of a Baptist minister. His brother Freddie says that accounted for one memorable feature of Nat's singing: He enunciated.

"Yeah, my father, he didn't allow you to be messing over the language," Freddie Cole says. "He would make you enunciate very well. He would get on your case about that."

Nat King Cole was successful. Friedwald says that in the years between Bing Crosby and Elvis Presley, Cole was the most successful American singer.

"He is, without a doubt, the single biggest record-seller of his generation," Friedwald says. "The only one that comes close is — a generation later — is Elvis. I mean, Nat Cole just has hit single after hit single, and nobody could come near him. Even Sinatra."

"Mona Lisa," "Nature Boy," "The Christmas Song," "Rambling Rose" and "Walking My Baby Back Home" are just a few of his songs. He had so many hits, he helped put the fledgling Capitol Records on the map.

Nat King Cole was black. To appreciate what that means, and what his career meant, you have to imagine a time when American music — like American schools and neighborhoods — was profoundly segregated.

Record sales were measured on three separate charts in Billboard magazine: Pop music was white. Hillbilly music was country. And R&B, or race music, was black.

"The thing about Cole was that he was absolutely a black man," says historian Roger Wilkins, who grew up black in the 1940s. "He conked his hair, processed it, smoothed it out, all shiny. Some of us, I included, had a view that guys who conked their hair were just escapists. With Nat Cole, you'd say, 'Well, that's OK. He does it because it's part of a thing that he has to sell.' "

Nat King Cole crossed over. And he crossed over as a handsome, debonair man who exuded sex appeal. That was something new.

"Black people were expected to sing comedy songs and, like, minstrel-type songs, or blues, or songs about work," Friedwald says. "But it was very, very unprecedented for a black man to come out and sing Cole Porter or sing George Gershwin or the great theatrical songs. He had this great sort of romantic aura about him, which was not what black performers of either gender were encouraged to do."

Nat King Cole broke another color line: television. Wilkins remembers the days when growing up black meant that everything that looked good and desirable was white and out of reach. Until Jackie Robinson, Major League Baseball was all white.

"And this television, this new television stuff, it was all white people," Wilkins says. "And then Nat Cole got a show." The show began in 1956, on NBC. "That was all people talked about," he says. " 'Did you see him last night?' "

The show aired without commercial sponsorship. Advertising agencies could not persuade a national client to buy time on The Nat "King" Cole Show, even though it was successful with audiences. They were afraid white Southerners would boycott their products. The show didn't survive, but a taboo was broken.

Despite his trailblazing role, Nat King Cole was no activist. Wilkins says Cole could not have gotten where he did displaying the political engagement, or the anger, of a Jackie Robinson. And he says he never blamed him for it.

"I didn't at all ever say, 'Darn that Nat Cole, he's got this whole audience. Why doesn't he say something?' Never," Wilkins says. "In retrospect, what occurs to me is, he knew who he was. He knew how — as the boys say — he knew how he could get over. And he wasn't going to blow that."

Cole influenced a slew of singers, including young Aaron Neville.

"I think Nat was everybody's favorite singer," Neville says. "From Ray Charles to Sam Cooke to Marvin Gaye — all of them loved him. Everybody wanted to do some Nat King Cole."

Frank Sinatra said when he went home, he played Nat King Cole records to relax. To me, Nat King Cole's voice is timeless. He died in 1965 and made a posthumous comeback a quarter of a century later, when his daughter Natalie made a tribute recording that mixed her voice with his. He didn't sound dated then. And, to me, he still doesn't.

I like the way Wilkins, the historian, remembers him: as a seamless character.

"The man and the music and the physical presentation all fit together," he says. "You didn't look and say, 'Well, why is he dressed like that?' This was Nat Cole. This coat. This shirt. This tie. This hair. And this voice."

All Things Considered's Sonari Glinton owns almost every album Nat King Cole ever made. Here, he recommends five recordings you may not have heard. 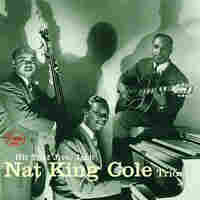 If there were ever any question as to whether Nat King Cole could swing as well as he could croon, "Hit That Jive, Jack!" puts that to rest. One of the earliest Trio recordings, it shows the evolution of Cole's musical style. The phrasing and the diction are there, but you can hear the group vocals that the Nat King Cole Trio relied on in its early days. His syncopated singing and playing shows him to be every bit the hep cat of the '30s and '40s as he would be the cool cat of the '50s. 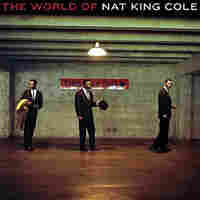 With the rise of rock 'n' roll, Cole's record sales in the U.S. took a hit. Capitol Records had a work-around: Go international. Cole recorded in Spanish, Italian, French and even Japanese. Though Cole sang accentless American English that was perfect for interpreting the Great American Songbook, that perfect American diction led to some less-than-stellar results when Cole sang in foreign languages. But when it was right, it was really right. This hauntingly beautiful version of "Autumn Leaves" is every bit as captivating as anything he sang in English. 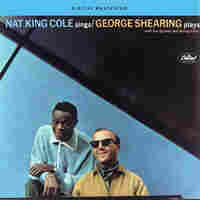 Everything Happens To Me

Everything Happens To Me

It's amazing to me that, with George Shearing and Nat King Cole in the same room, you'd ask Shearing and not Cole to play the piano. This song comes from an entire album of collaborations between the two. What makes this Matt Dennis & Tom Adair song special is the humor Cole brings to it. Cole's natural joie de vivre collides head-on with this melancholy song. It works! By the end, you think things aren't that bad after all. 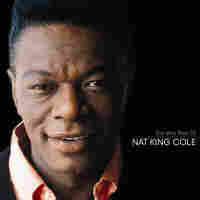 Each of the people interviewed for the piece above said that Cole's voice had a mystical quality. That may be why he was able to sing the novelty songs so well. The story goes that the enigmatic writer Eden Ahbez handed Cole's manager "Nature Boy" backstage at a concert. He recorded it and it shot to No. 1 on the charts. That Cole was able to tackle this difficult and quirky song is testament to his technical ability and his interpretative style.

I hesitated to add this song because in many ways it's so obvious. How many thousands of couples have danced to this song on their wedding night? That said, it was one of the last sessions Cole recorded before he went to get treated for cancer. Not only did he tape a beautiful version in English, but he also cut Japanese, Spanish and French versions. Each letter is a word of its own. This is how Cole went out -- precise, warm and oh-so-cool.