Accessibility links
Mary Lou Williams: A Centennial Celebration With a career spanning six decades, Williams was one of jazz's great composers and humanitarians. Saturday marks the 100th anniversary of her birth; tributes across the country will mark the occasion. 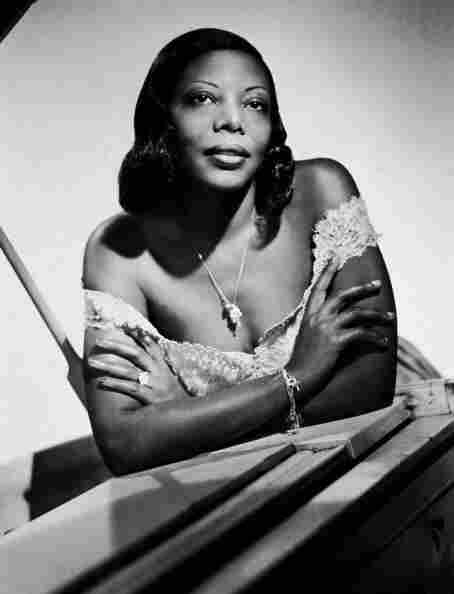 Not only did Mary Lou Williams write and arrange music for herself and legends like Benny Goodman, but she also taught Thelonious Monk and Bud Powell. Metronome/Archive Photos hide caption

It's late on a rainy Monday night, and a quartet is swinging the back room of a Times Square pub. On the surface, it appears to be just another gig. Really, it's a harbinger of things to come.

The jazz pianist and composer Mary Lou Williams would have been 100 years old Saturday. And musicians, like Virginia Mayhew, are paying tribute in concerts from Madison, Wis., to Princeton, N.J. In a few weeks, the saxophonist and dozens of others will take the stage at the Kennedy Center for the Mary Lou Williams Women in Jazz Festival.

"I think she is probably the greatest female jazz player who has ever lived," Mayhew says. "Really, I do think that. But I look forward to when the female part of it is irrelevant."

In jazz, where the ranks of instrumentalists are still dominated by men, Williams' status as an early female pioneer has turned her into a symbol embodying women in jazz. While female performers tend to be on guard against tokenism and the separate but so often unequal acknowledgment of their contributions, they're clear in their approbation of Williams' talents and her value as a role model.

"Her fearlessness and self-determination, I think that is an inspiration, when you see a person so clearly confident in their voice," says pianist Geri Allen, who played the role of Mary Lou Williams in the Robert Altman film Kansas City. "Because of her and her excellence, and because of her commitment to this very pristine level of artistry, my generation of players who are women don't have to go through that kind of resistance. I can't imagine it, to tell you the truth."

Williams was so exceptional, and carried herself with such dignity, it's difficult to imagine that she could face any resistance. Born Mary Elfrieda Scruggs, she grew up in Pittsburgh and was playing practically from the time she could walk. Her mother would practice on an old-fashioned pump organ and kept the toddler in her lap to keep her out of mischief.

"One day, when she was pumping the organ, my fingers beat her to the keyboard and began playing," Williams said. "And it must have been great, because she ran out and got the neighbors to listen to it."

Williams began working professionally at 7 and was touring on the Orpheum circuit by 14. She married the saxophonist John Williams, and the couple became members of Andy Kirk's Twelve Clouds of Joy.

Working as not only the band's pianist, but also its arranger and composer, Williams soon attracted attention. Earl Hines, Tommy Dorsey, Duke Ellington and Benny Goodman all wanted her to write for them.

"She was one of the swingin'-est people I've ever played with," pianist Billy Taylor says. "I mean, she would swing you into bad health."

Taylor founded the festival at the Kennedy Center in Williams' honor. He says that, unlike others of her generation, she continued to be on the cutting edge. Her Harlem apartment, around the corner from Minton's Playhouse, became a kind of salon for the progenitors of bebop in the early 1940s. Taylor was there.

"I remember one time, she said to me, 'Billy, can you come on over to the house tomorrow? I'm having [Thelonious] Monk and Bud [Powell] over because I've got to do something about the way they touch the piano,' " Taylor says. "I said, 'What you talking about?' "

With their percussive approaches to the instrument, Thelonious Monk and Bud Powell weren't exactly known for having a light touch.

"She was saying the piano responds in a certain way," Taylor says. "You can't just bang away and say I'm getting the sound I want. There is no question, but if you go back and listen to certain records that were played back in that period, you hear a difference. There's a difference in Monk's sound, and there's a difference in Bud's sound."

Williams nurtured the beboppers, but suddenly, in the 1950s, she stopped playing and experienced a profound religious conversion. She was baptized as a Catholic at the Church of Saint Francis Xavier in the West Village.

"Mary was a creative artist. She would not be looking for anything in the church. She was looking for God. God," Father Peter O'Brien says. "This was how she established that more formally."

O'Brien, Williams' longtime friend and manager, says her spiritual convictions and her music were part of the same deep interior life. She did charitable work, rehabilitating musicians who had fallen prey to drugs. She had already begun to write large-scale compositions; the New York Philharmonic performed her Zodiac Suite as early as the 1940s. But even when she was coaxed back to the piano, she turned her attention to sacred works. She dedicated Black Christ of the Andes to Saint Martin De Porres, the first black Catholic saint.

A Festival In Her Name

Before she succumbed to cancer in 1981, Williams started a foundation in her name, with the idea that it would help save jazz; O'Brien continues to direct the organization. While Taylor says Williams would have liked the festival that bears her name and other recognition for the accolades she didn't get during her lifetime, O'Brien says he's not so sure. Her reaction to her inclusion in the first women's jazz festivals that coincided with the rise of second-wave feminism in the 1970s was not altogether positive.

"When all this started, she said, 'Why are they putting me in with all the women? I don't want to be in with all the women,' " O'Brien says. "She was preeminent to start with. You don't line up four women piano players and make Mary Lou one of them. You line up James P. Johnson, Count Basie, Fats Waller, Mary Lou Williams, Thelonious Monk. That's how you do that."

But O'Brien has an idea that seems more in keeping with Williams' spirit. He says it would do her proud, and might even quell the concerns of those attempting to follow in her footsteps.