Accessibility links
Working To Stop Teens Texting Behind The Wheel For many teens, their cell phones are an extension of themselves. They use their phones while they're at school, while they're in bed — even while they drive. And an increasing number of car crashes are caused by those distracted by cell phones. Experts are developing projects to stop teens and adults alike from texting in the car. 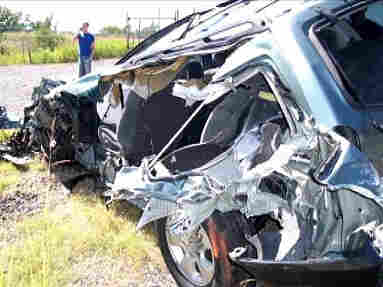 toggle caption
Courtesy of The News On 6

Kids say they just can't help it: They pretty much text all day long — even while driving. And texting and driving is a dangerous combination. Research by the National Highway Traffic Safety Administration shows that in 2008 alone, nearly 6,000 people were killed and more than 500,000 were injured in crashes involving a distracted driver.

While drivers face any number of distractions — including eating while driving, talking to passengers and controlling young children — highway safety experts say cell phone use and texting are increasingly worrisome. In post-crash interviews, texters often can't recall going through stop signs or traffic lights because they were so involved in looking down at their phones.

Minnesota teen Natalie Hayford says it's just so hard not to text.

Risk-taking is a natural part of growing up. But sometimes teens take risks that are unhealthy, and often dangerous. NPR spoke with two psychiatrists about the role of risk-taking in growing up, and how parents can minimize dangerous behavior. Read the story.

"You text while you're doing anything else," she says. "People text-message in school, when you're walking, and it's just habit where they might not even think about text-messaging while driving. They just do it."

Amanda Lenhart, a senior researcher at the Pew Internet and American Life Project, surveyed 800 pairs of teens and parents, and organized focus groups with children in four different cities. During the focus groups, she says she was amazed to discover the teens were secretly texting under the tables as they talked with researchers.

When researchers asked if teens ever turned their phones off, the majority looked at the interviewers in "horror," says Lenhart. She says the kids said they might put their phone on silent or vibrate — but off? Highly unlikely.

"They would never actually want to cut themselves off from that network of communication that the phone represented," says Lenhart, who adds that the teens even slept with their phones. Lenhart talked to 74 teenagers in nine different focus groups in four cities nationwide.

While teens may be aware of the danger of texting while driving, it doesn't faze them, says 16-year-old Bethany Brown, of Cave Creek, Ariz., who recently won a nationwide contest for producing a PSA against distracted driving.

Teens think, "Oh I have just one message. I can do that. Just one quick text at a stoplight," says Brown, adding teens don't think about the consequences.

Transportation Secretary Ray LaHood calls texting while driving an addiction, adding that at 55 mph, texting drivers travel the length of a football field — including the end zones — without ever looking at the road. LaHood is overseeing two federally funded pilot projects to test whether increased law enforcement efforts can get distracted drivers to put down their cell phones and focus on the road. The programs are in Hartford, Conn., and Syracuse, N.Y.

"If a driver is caught with a cell phone in one hand, they'll end up with a ticket in the other," LaHood says.

He adds that before seat belt laws, hardly anyone used seat belts. But that changed when laws were passed. Laws and enforcement work, he says.

"People said you couldn't get drunk drivers off the road, but with strong enforcement it's been done. Strong enforcement will get cell phones and BlackBerrys out of people's hands while they're driving," LaHood says.

Parents Can Set An Example

Meanwhile, technological developments are under way that would literally shut a phone down if it's used in a moving vehicle. But one of the simplest solutions might be in your own backyard: Parents are strong role models. 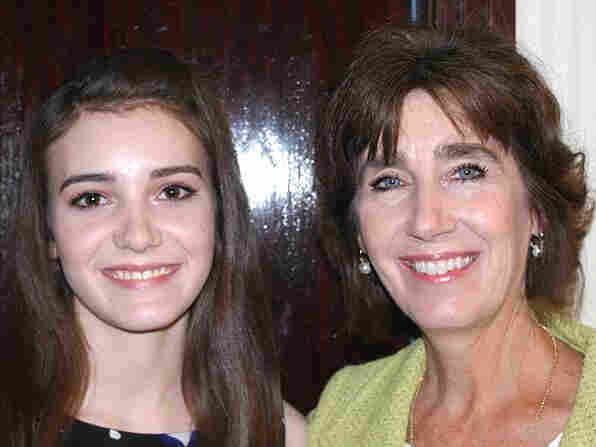 Teens may be aware of the danger of texting while driving, but it doesn't faze them, says 16-year-old Bethany Brown, shown here with her mother. Brown won a nationwide contest for producing a PSA warning against distracted driving. Courtesy of the Department of Transportation hide caption

toggle caption
Courtesy of the Department of Transportation 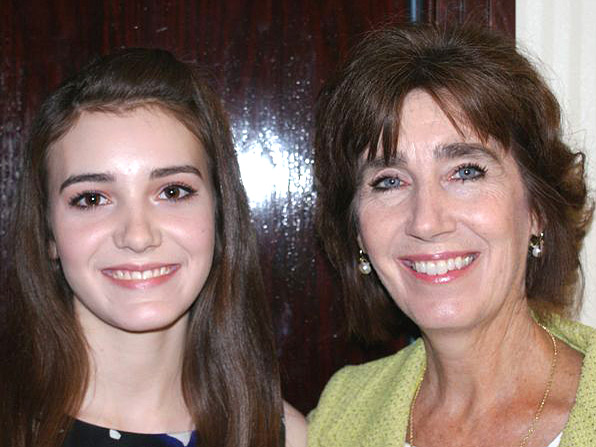 Teens may be aware of the danger of texting while driving, but it doesn't faze them, says 16-year-old Bethany Brown, shown here with her mother. Brown won a nationwide contest for producing a PSA warning against distracted driving.

Courtesy of the Department of Transportation

Research hasn't shown similar results for cell phone use and texting. Anecdotal evidence shows kids are watching their parents — but not only as positive role models. Researcher Lenhart says a number of the teens in her focus groups reported actually being "scared" by their parents' driving behavior.

"They would tell stories about their parents texting with the phone while trying to drive with their knees," Lenhart says. "They would talk about other ways in which parents were distracted behind the wheel, including using GPS or trying to use the walkie-talkie function on the phone, or making calls."

Don Brown, Bethany Brown's father, admits he used to talk on his cell phone quite a bit while driving.

"It was time management, and I think for a lot of adults in the working world, having a cell phone in the car is a way of being productive while you're going from A to B," he says.

But since Bethany entered and won the anti-distracted-driving PSA contest, Brown says, he's put his cell phone away. It was hard at first, he says, but he's gotten used to it. And surprisingly, he adds, he hasn't noticed any real change in his productivity.