Accessibility links
Rig Blast Survivor: 'I Thought I Was Going To Die' Christopher Choy was one of the youngest men on the crew of the Deepwater Horizon, the oil rig leased by BP and anchored in the Gulf of Mexico. When it exploded on April 20, Choy was convinced he wouldn't make it out alive. "This is it," he thought. "We're not gonna get out of here." 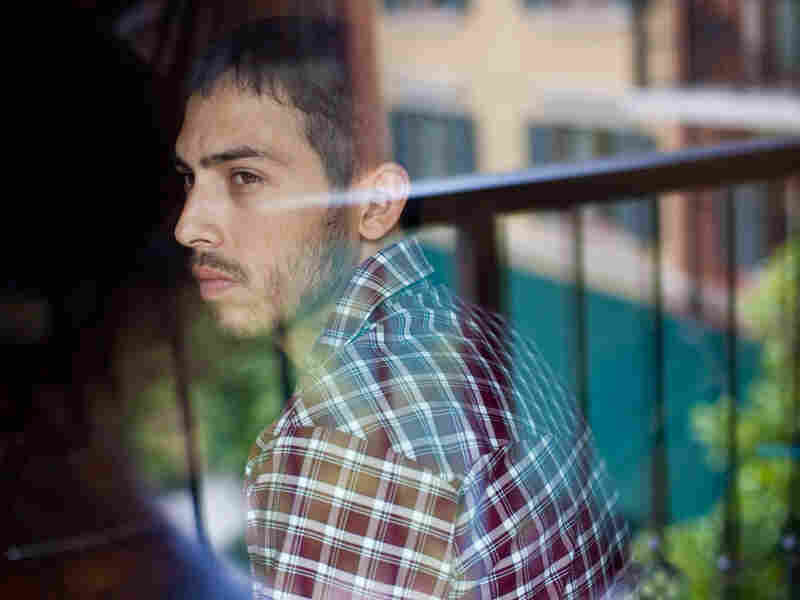 Christopher Choy is haunted by the sound of explosions and the guilt of leaving men behind. Ben Sklar for NPR hide caption 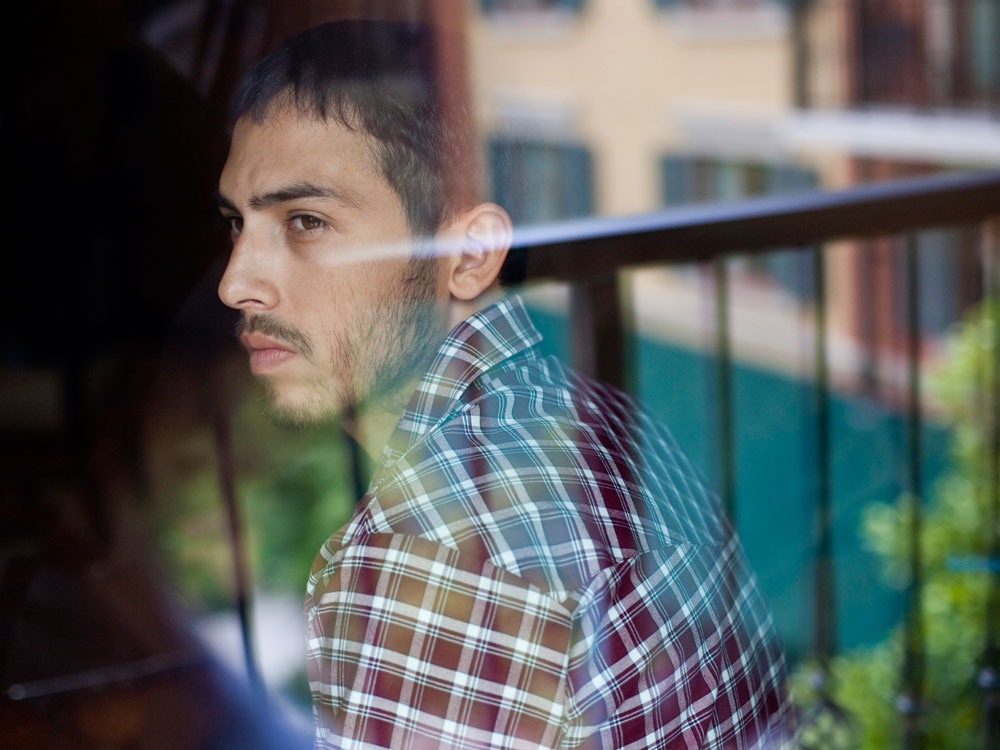 Christopher Choy is haunted by the sound of explosions and the guilt of leaving men behind.

First in a two-part report.

Christopher Choy was one of the youngest men on the crew of the Deepwater Horizon, the oil rig leased by BP and anchored in the Gulf of Mexico. He'd finished his 12-hour shift at 11:30 in the morning on April 20. He'd had a hard time getting to sleep later that afternoon, finally nodding off at about 6 in the evening. It was less than five hours before he'd have to get up again for his next shift.

But a loud noise woke him up a little before 10 p.m.

"It sounded like somebody pressure washing the outside of my room — like you take your car through an automatic car wash. And when the pressure washers hit your windows, just that buzz is what it — is exactly what it sounded like," Choy says. "I mean, just a loud buzzing."

How Events Unfolded For Choy

First explosion at 9:35 p.m. on April 20 wakes up Christopher Choy in his bunk. As he sits up, a second explosion lasting several seconds sets off the fire alarms.

Choy, who's on the firefighting team, makes his way in total darkness to the equipment room. Another firefighter arrives and tells him the crane operator is in trouble. They both suit up.

On deck they head toward the crane operator, who has fallen off the spiral staircase that leads to the crane box.

They get about halfway across the deck to the man when an enormous fireball cuts off their path.

The two firefighters struggle with the idea of trying to get to the crane operator as people are yelling at them to get to the lifeboat capsule because the crane is going to fall.

Choy goes to the lifeboat area, where there is chaos and panic. No one knows how to lower the lifeboats, and the men believe the crane is about to fall and kill them.

Dozens of people scramble into a lifeboat capsule meant to hold 60. But the engine that lowers the lifeboat into the water won't start. After several attempts, someone finally gets it started, and the boat lowers to the water.

After 15 minutes in the lifeboat, they meet up with the supply vessel, the Damon Bankston. A rope ladder is lowered, and they make their way up the ladder onto the vessel, helping the injured.

On the vessel, a clipboard is passed around for people to sign, and a count of the survivors is made; 11 men are missing.

He'd later find out it was gas escaping the riser, an ominous "kick" that signaled the trouble to come. Choy went back to bed to try to get an hour more of precious sleep. But then there was a bang, the first explosion. He sat up in his bed in the dark room, trying to figure out what was going on and whether he could go back to sleep.

And then moments later, an even louder explosion. "And it just shook the whole rig. I mean, that's as close as I can figure an earthquake would be. I've never been in one," Choy says. "And it lasted for several seconds. When it was over, they started setting off the fire alarms and announcement that we had a fire. They were screaming, 'Fire! Fire! Fire! This is not a drill! Go to your stations! This is not a drill!"

Choy, 23, of Katy, Texas, shared his story at length with NPR and the PBS program NewsHour in one of the most extensive interviews from a survivor of the April 20 Deepwater Horizon rig explosion. Choy, in a red Western shirt and jeans, told the story as he held hands with his wife, Monica.

Choy described the chaos that followed the explosions, the guilt of having to leave men behind, of watching others who couldn't get to the lifeboats jump 50 feet or more into the Gulf of Mexico to get away from the heat of the flames, and of the injured and the panicked men who crammed one lifeboat to the point that it almost capsized.

As a young roustabout on the rig, Choy held one of the lowliest jobs. He was hired by Transocean last June after working on another rig. He got some training and then was assigned to the Deepwater Horizon. He was part of the crew that set the record last fall for drilling the deepest well in the world. That gave him and the crew "bragging rights," and it made him proud. If another crew drilled a well even deeper, then he wanted to be on the next crew that set the record again.

Choy liked the physical, demanding work — 12 hours on and 12 hours off. On the Deepwater Horizon, he explains, a roustabout "works for the crane operator. He hooks up the crane ball to slings or equipment or anything that needs to be moved around the rig or off a boat or onto a boat. And other than that, we do a lot of cleaning — pressure washing, mopping, maintenance on small equipment out there. We pretty much just help out anywhere else around the rig that somebody needs a hand." 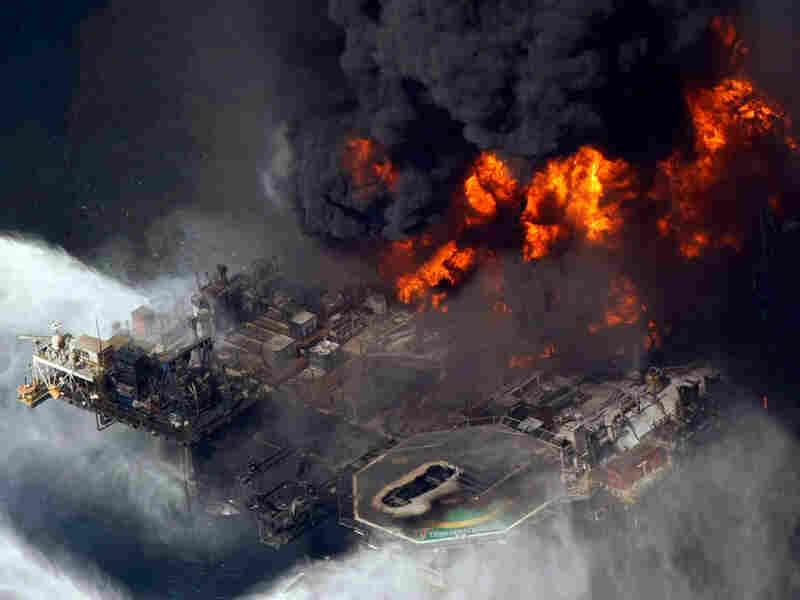 The Deepwater Horizon oil rig is seen burning in this April 21 file photo taken in the Gulf of Mexico. Gerald Herbert/AP hide caption 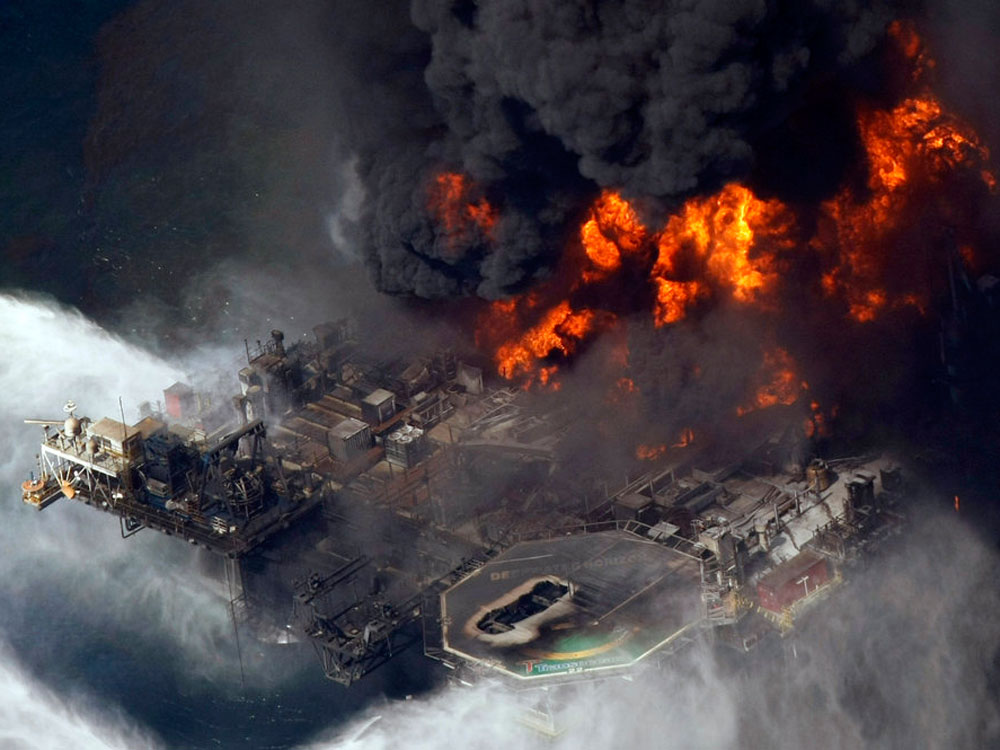 The Deepwater Horizon oil rig is seen burning in this April 21 file photo taken in the Gulf of Mexico.

There's another part of a roustabout's job: He's on the fire team in case of an emergency. And after the second and then third explosion that night, Choy scrambled to put on his fire gear and headed to the fire station. But when he got there, no one else had arrived.

He panicked, thinking everyone else had already left the ship and that he was on his own.

"First thing I thought was, 'Well, maybe I misheard the announcement. You know, I just woke up," Choy says. "Maybe I didn't hear the announcement right. Maybe they just said to abandon ship."

He says he looked up and saw the flames coming out of the derrick.

Choy thought he was about to die. "Immediately, I knew we weren't gonna put that out. And that was just the worst feeling in the world. I never been the person to be scared of anything. I mean, the guys I work with will tell you I ain't scared of anything, and I was scared to death right then," Choy says. "I mean, that's all that was going through my head was, 'I'm fixing to die. This is it. We're not gonna get off of here.' "

Through the dark, orange flames illuminated parts of the rig blown away by the explosion and eaten away by fire. Debris — buckets, metal grating, hammers and parts — were falling. Choy ran to a second fire station where he saw the ship's first mate.

They would become the fire crew, Choy says, but there was little they could do.

On the floor of the rig, they spotted a popular crane operator. He'd been blown off the stairs to the rig and fallen some 50 feet below. Fire was burning menacingly close to him. Then, as they tried to reach him, a fireball erupted in their pathway, and they realized they could not reach him to try to save him.

"It just killed me that I knew I couldn't get to him," Choy says. "That's probably the hardest decision I've ever had to make in my life — that we had to leave that and leave him there."

Choy would reach the life capsule on the deck below. And there he found a scene of dangerous chaos. Men — including some with broken bones, open wounds and burning skin — pushed onto the lifeboat. It was built for about 60 men, but many more crowded onto it, making it unstable.

"Some people were trying to just jump in them, and they were going crazy. And I mean, it's actually dangerous to be in a lifeboat if people aren't properly trained or people are panicking in a lifeboat — you can flip the lifeboat," Choy says. "If everybody's not strapped in, they're freaking out, running to one side of it, it'll flip over and it's gonna stay upside down. And if you have the door open, I mean, it's gonna fill with water."

Then the lifeboat's engine wouldn't start. Choy had seen other men jump off the rig, sometimes from 40 feet or more, and into the water. They had jumped to get away from the heat of the flames.

He thought about jumping. He didn't want to die in the lifeboat. "I took my seat belt back off. I was 'I'm fixing to jump.' I said, 'If they can't get the motor started, I'm not fixing to burn up, you know, in a life capsule,' " Choy says.

But a worker who did maintenance on the rig figured out how to get the engine running, and the lifeboat lowered to the water, with men still screaming in panic and pain.

There were more problems when the lifeboat did get dropped into the water. In the deep smoke, they couldn't tell whether the lifeboat cable had unhooked from the rig. Someone had to unlatch a door, climb out and check.

In the lifeboat, the men would get to a supply ship nearby. They'd carry the wounded up a rope ladder to the ship, called the Damon Bankston. A second lifeboat arrived. The two other lifeboats were on fire and in the water, drifting away.

The men who'd jumped off the rig were rescued by fishing boats and other craft on the water and brought to the Bankston.

Roll was called to sort out the dead from the survivors. Eleven were missing from the 127 on board.

Workers who survived the blast were asked to sign form letters about what they had seen and whether they had been injured. Now some survivors say that the forms are being used against them as they file lawsuits seeking compensation for psychiatric problems and other injuries from the blast. 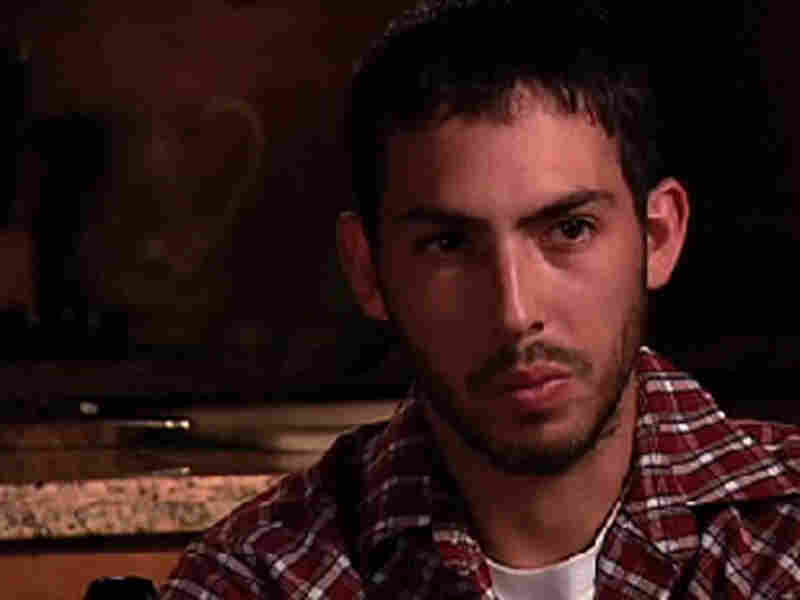 Choy Discusses 'The Hardest Decision' Of His Life
PBS

That's all that was going through my head was, 'I'm fixing to die. This is it. We're not gonna get off of here.'

From the Bankston, just a few miles from the rig, the men watched in horror as the Deepwater Horizon continued to burn.

"That was hard," Choy says. "We sat there for probably six or seven hours and watched the rig burn. I mean, it makes you sick to your stomach, just watching that and knowing that you're missing guys, and that they're up there somewhere, not knowing if they're alive or dead or if they jumped off and somebody's looking for 'em in a boat."