Accessibility links
Songs We Love: The Rolling Stones' 'Exile On Main Street' A newly reissued Exile on Main Street features unreleased outtakes, remastered originals and alternate versions of the songs. So NPR Music's staff asked musicians to pick their favorite songs and expound on the many ways Exile on Main Street has influenced them.

Musicians Share The 'Exile' Songs That Influenced Them Most 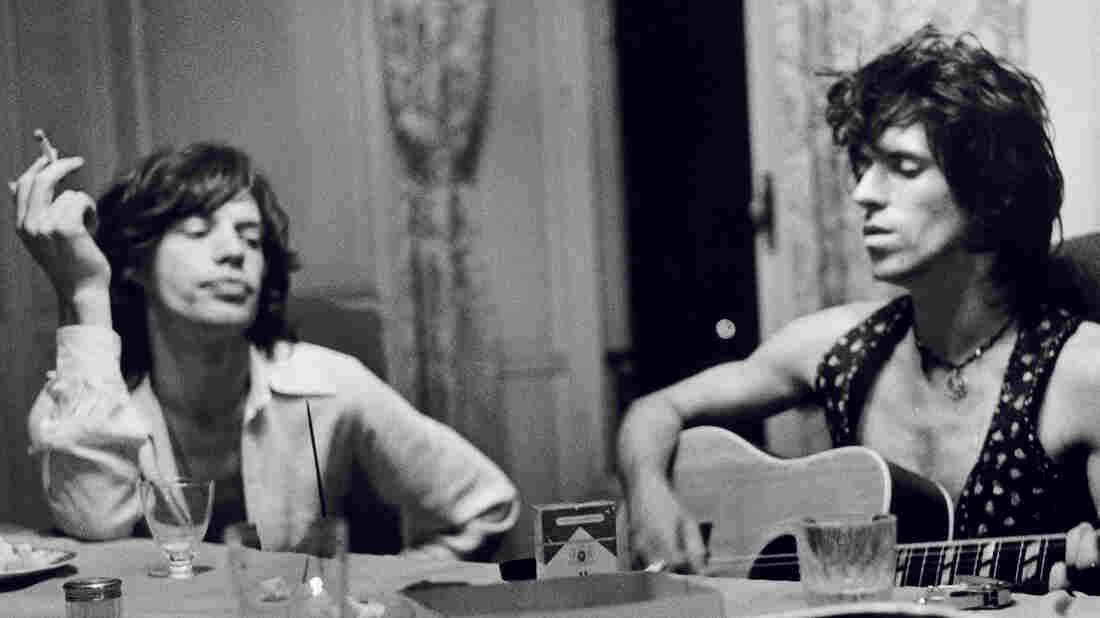 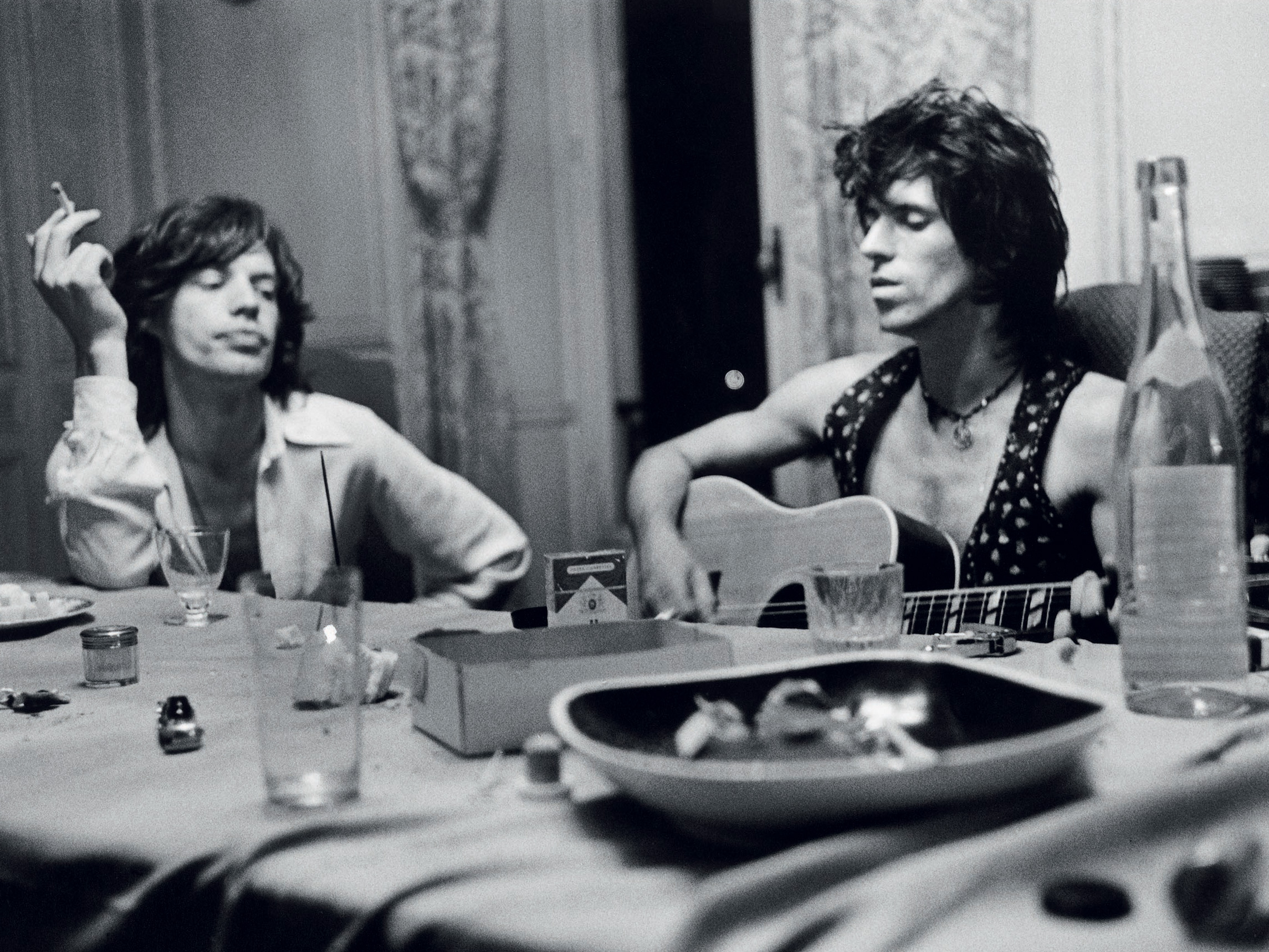 Mick Jagger and Keith Richards during the 1971 recording sessions for Exile on Main Street.

The 38th anniversary of The Rolling Stones' classic album Exile on Main Street provides as good an excuse as any for a reissue with unreleased outtakes, remastered originals and alternate versions. Of course, it also provides a fine excuse for NPR Music's staff to 1) listen to the album; and 2) ask some musicians we admire to pick their favorite songs and expound on the many ways Exile on Main Street has influenced them.

We asked everyone from Liz Phair — whose breakthrough album, Exile in Guyville, re-imagined Exile on Main Street from another perspective — to Alejandro Escovedo and Robert Randolph for their feedback. We got thoughtful responses from them and others, including members of Spoon and The Black Keys, and NPR Music's Monitor Mix blogger and former Sleater-Kinney guitarist Carrie Brownstein.

You can read and hear much more below (and listen for interviews with Mick Jagger and Keith Richards on Morning Edition next week), but we also want to hear your thoughts on Exile on Main Street: your favorite songs, your own stories about how the album has affected you and your thoughts on the newly released material. Please join the discussion in the comments section of this page.

'Rocks Off' by Liz Phair

I had this huge crush on this guy in the music scene, and he and I had a couple interactions, but nothing really serious. But I invented this idea of him as Mick’s character on Exile On Main Street. So whenever I listened to that album I felt like I was listening to what this guy talking to me. And then I sort of wrote back to him, vis-a-vis the Stones, on Exile In Guyville. You think about "Rocks Off:" he's coming home from this one-night stand and he runs into some girl he knows, who's sort of, like, "Where have you been?" And he's, like, "Look, I just can't deal with you right now," and walks off. So I put myself in the shoes of that girl he meets on the street, and that's how I wrote "6'1." In Exile there are a whole range of emotions and characteristics and personal traits and ambitions and I used them all. --from an interview on NPR's Bryant Park Project

'Shake Your Hips' by Robert Randolph

At one point, we realized there were too many guys at our gigs, and we had to do something to bring in the ladies. "Shake Your Hips" was such a cool song and just made you want to dance, so we started playing it and it worked. The women actually started showing up. We included a version of the song on my first album, Live at the Wetlands, and it's probably our most played song live. To this day, when we play the song, the ladies storm to the front of the stage and jump on stage and dance. That's the power of the Stones.

I read somewhere, somebody said that "Rocks Off" into "Rip This Joint" is the best opening one-two punch ever. That stuck with me, and I think I believe it. And the ratio of greatness to filler is thicker on this than probably any other Stones album. Come to think of it, Exile has got kind of a similar vibe to London Calling, and not just because they're two of the very few double albums that really needed to be double albums. I love "Sweet Black Angel" best, I think -- I love the roominess, the zany percussion and how sweet yet tough that one stands up.

"Happy" contains the guitar riff you wish you could write; the one everyone convenes around and piles upon. You want to rally behind this tune and cheer it on. "Happy" is a morning jam, an early riser, a sunny-side up. It's a little bit boogie and Creedence-like in the way Keith Richards' notes nearly slide off the neck; plus, Jagger basically quotes "Proud Mary." The words speak to an untenable desire, but the music is such a celebration of itself, of a singular guitar line -- mimicked by a horn -- that it starts to feels like a mantra, and thus like a possibility, a plainspoken truth. In other words, this lift-off of a song, as long as it's playing, gives you more than mere satisfaction.

'Turd on the Run' by Patrick Carney, The Black Keys

This song is one of the many great examples of The Rolling Stones' understanding of what I think is truly American music, but what may actually be skiffle. They are connoisseurs of all things stylish. Their execution is impeccable, and they move things forward while embracing tradition, which is much harder to do than one might think.

'Shine a Light' by Alejandro Escovedo

To me, “Shine a Light” is like a little movie -- in keeping with the Robert Frank photographs on the cover. This song is probably as gritty and grainy and black-and-white as you can get. The song represents everything that the Stones were and could be. That period of time, 1972, was really important for me: The Stones represented everything that was totally outside the norms of society. They created their own lifestyle, of which I was a practitioner.