Accessibility links
'Moby-Dick': Musings On Whale Heads In this week's installment of the I Will If You Will Book club, we continue our exploration of Moby-Dick and the big world of whale head comparative studies. 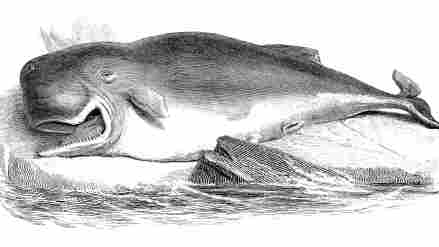 This is an engraving of a sperm whale, photographed from an 1881 book. Doesn't he look like he's seeking an understanding of God? iStockphoto.com hide caption

What We're Reading For Next Week: No new chapters; catch-up week! Take the opportunity to catch up if you've gotten behind. We will not go past chapter 80 in next week's discussion.

I am on my own to get us underway for book club this week -- with apologies for the delay from yesterday. We're still clearing up the dust bunnies in the new digs.

I will first refrain from repeating my lament of last week that it is taking all my fortitude to stay with this book during this long segment in which an event briefly occurs, and then four or five chapters are spent explaining the general anatomical, cultural, historical, or vocational matters surrounding that event, to the point where, if you had to write a book report, you could basically take the book report right out of the book.

Special Note: I think it's fair to take a moment and acknowledge Power Moby-Dick, a site that annotates and explains the book — not so much by explaining why things are in the book, but literally by shedding light on what otherwise might be impenetrable phrases, names, and references. It's a very useful resource.

Now, you could assume that Melville is just being obstinate; that he has done all this research and is now surrounded by notecards and intends to put everything he has learned on the page. You could assume that he simply is a whale fetishist and believes that everyone else is as interested as he is in the finest details of whales as he is. Or you could assume that he intends to make Ishmael seem boring and long-winded and obsessed with showing off his (often dubious) mastery of whale facts. I think that's part of it, but I decided to crawl inside these chapters and see what I could see.

Of the grand order of folio Leviathans, the Sperm Whale and the Right Whale are by far the most noteworthy. They are the only whales regularly hunted by man. To the Nantucketer, they present the two extremes of all the known varieties of the whale. As the external difference between them is mainly observable in their heads; and as a head of each is this moment hanging from the Pequod's side; and as we may freely go from one to the other, by merely stepping across the deck:—where, I should like to know, will you obtain a better chance to study practical cetology than here?

First of all, that last part is a cruel joke, no? Did I ask to study practical cetology, Herman Melville?

But the introduction does lay out "two extremes" with differences "observable in their heads." I don't think it takes a literary analysis savant -- which I am not -- to conclude that the examining of heads would make a rather potent metaphor for any sort of glance into the character of "two extremes."

(Come on. It's either that, or he just likes showing off about whale heads, and I don't think I can bear that.)

He goes on to state that the Sperm Whale's head contains "mathematical symmetry," while the Right Whale's head does not. Also, he describes it as more aged -- "salt and pepper," actually. So far, we have the Sperm Whale cast as a sort of physically symmetrical old man. I got it.

We then move into the discussion of the eyes, and specifically of the fact that the eyes are on the side of the head, such that whales cannot see either directly forward or directly backward. They have both "two backs" and "two fronts." THEY SEE EVERYTHING AND YET THEY SEE NOTHING.

Once again, I think I am following.

He also points out that the whales can't really merge the pictures into one -- they see the world in two distinct ways, separated by "profound darkness and nothingness." Does this have any relevance, do you think?

This peculiarity of the whale's eyes is a thing always to be borne in mind in the fishery; and to be remembered by the reader in some subsequent scenes.

Aha. Well, at least he warned us.

We then learn that while it might seem like it would be confusing to see two separate things at once, whales are actually lucky, because you and I can only see one thing at a time -- we might become, for instance, insanely focused on one target -- whales are always seeing more than one thing, always able to pay attention to more than one, for instance, approaching threat.

We then get a description of the whale's jaw, and specifically of the fact that while the whale's jaw might be terrifying when it's coming to eat you with its nasty pointy teeth, it is actually a more upsetting sight when it's slack as a result of the whale being, as Ishy puts it, "dispirited."

Being dead, you see, is not so bad as losing your passion.

And then, the cold description of the whale's jaw being dismantled after its death:

With a keen cutting-spade, Queequeg lances the gums; then the jaw is lashed down to ringbolts, and a tackle being rigged from aloft, they drag out these teeth, as Michigan oxen drag stumps of old oaks out of wild wood-lands. There are generally forty-two teeth in all; in old whales, much worn down, but undecayed; nor filled after our artificial fashion. The jaw is afterwards sawn into slabs, and piled away like joists for building houses.

We go on to learn that the right whale has more of a lip, more of a tongue, more of a bristly mustache -- but then we come to this.

Can you catch the expression of the Sperm Whale's there? It is the same he died with, only some of the longer wrinkles in the forehead seem now faded away. I think his broad brow to be full of a prairie-like placidity, born of a speculative indifference as to death. But mark the other head's expression. See that amazing lower lip, pressed by accident against the vessel's side, so as firmly to embrace the jaw. Does not this whole head seem to speak of an enormous practical resolution in facing death? This Right Whale I take to have been a Stoic; the Sperm Whale, a Platonian, who might have taken up Spinoza in his latter years.

So in the end, the purpose of this discussion of the two whale heads hanging from the sides of the ship is to cast them as opposites, not in anatomy, but in approach to death, based on their post-mortem facial expressions.

Two ways to approach your doom -- you can strain to understand it, or you can just go with the flow.