Accessibility links
Rapper Ice-T Takes A Quiz On Pantyhose In 1999, Ice-T appeared in the documentary Pimps Up, Ho's Down, so we've invited him to play a game called "Pimps Up, Pantyhose Down." Three questions about a different kind of hos(e.) 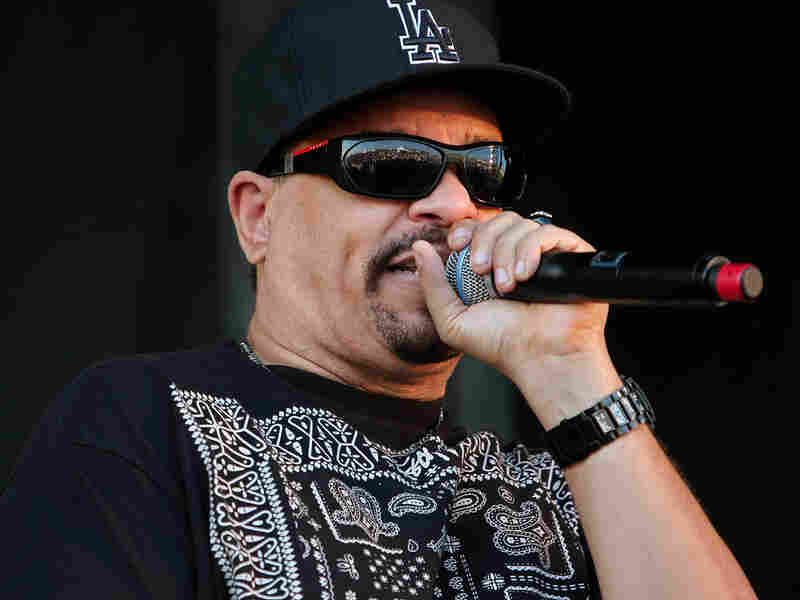 Ice-T has made a name for himself in rap, metal, breakdance movies, video games, and, most recently, on Law and Order: SVU. We're hoping to pitch him on our new idea for a TV show: Law and Order: NPR, in which we solve crimes and then encourage the still traumatized but grateful victims to pledge at any level.

Ice-T appeared in the documentary Pimps Up, Ho's Down, so we've invited him to play a game called "Pimps Up, Pantyhose Down." Three questions about a different kind of hos(e.)

: We've got to ask, you've done so many things in your career for so long. Do you ever find that people, like, don't know that you've done other things?

: Are they shocked when you tell them?

ICE: Their mothers usually tell them.

ICE: Or either - you know what else? I mean, like the grandma or somebody, you know, in the airport and their grandmother loves me from "SVU" and she's like, oh, that's Ice-T. And their daughter's like, do you really know who that is? You know.

ICE: They always say, he's the police. They go: Mama, he's far from a cop.

: Yeah. So let's talk a little bit about the madness. What do you mean by that, exactly?

ICE: Well, you know, I mean we started hard-core hip hop back - you know, I started rapping in 1982. You know, it scared the hell out of America. I mean, we went on to do a lot of different, other things that really shook up America. I mean, I was - how many people in your audience will ever have the honor of having the president of the United States say their name in anger?

: Can you imagine like, back in 1986 when, like you say, you were being condemned by everybody, including the president, of - like, looking in the camera and saying: Someday, America, I'm going to star in your favorite prime-time drama?

ICE: It's only in America, baby.

: Well, let's go back to the beginning, and let's talk about the beginning of your musical career. You grew up in Southern California. Where did you start performing? How did you get into that?

ICE: Well, I went to Crenshaw High School. After that, I went into the Army. I did four years in the military. And when I came out of the military, I got right into trouble.

ICE: You know, I was out on the streets doing everything. I mean, I robbed banks. I did all kinds of things. And, you know, the music business, the rap music business was just starting. And I would go to clubs and yet, after I would go out and do whatever I was doing, I would go in the clubs and I would rhyme just to get attention. And I started to kind of mix in some of the facts of the life that I was living with the music, and we created a genre which they called gangster rap.

: I'm sorry. I mean, maybe it's just me, but I'm just kind of amazed at the idea: Well, I was robbing banks and that didn't get me enough attention, so I decided to make up rhymes. And it worked, you know?

ICE: Well, you know what? I got news for you. You don't want to get attention when you're robbing a bank.

: You want to sneak around. I'm sorry, this is why I'd be really bad at living your life.

: So it's amazing. though. I mean, you were a bank robber. You were living that life. Now you're a television star. You're about to direct your first movie. Would you suggest that to young kids instead of saying...

: ...going to drama school? Go rob a bank or two, get some life experience.

ICE: No, no. I mean, I would say - you know, what they think is square is really the correct way. You know, go to school, get an education, graduate. You know, get a degree. I mean, those things that, you know, lots of cats like myself tried to do, those were what we thought were considered shortcuts.

ICE: But you usually make a detour through the penitentiary, and then you come out, you know, 20 years later. And now, your shortcut has turned into the longest route you ever thought.

: I want to talk to you about your acting career. One of the things that everybody's noticed is, you take you, you got Ludacris, you got Mos Def, you got Common, you got Andre Benjamin - all you guys are doing really well as actors in movies and TV. You compare it to - oh, let's just say Britney Spears in the movie "Crossroads." It seems as if you guys...

ICE: No, let's not compare.

: I want to compare you favorably because you guys are really good actors. I mean, is there something about hip hop that lends itself to acting?

ICE: I think to act, you have to be real. You have to be willing to zero yourself out and become the character. And I think, you know, also you're dealing with cats that come from a background with no opportunity. So when you give us an opportunity, we really apply ourselves.

: Now, you're working on a documentary about hip hop, about rap music.

: Do you think that - I mean, I don't know if you've ever done this before, but have you ever considered having like, an Ice rap summit: you, Ice Cube, Vanilla Ice?

: Do you know Vanilla Ice?

ICE: You know? So I think back in the day, we didn't really dig it because...

ICE: ...one of his mistakes was, he came into the rap business saying he was from the street. And we were like, what street, Sesame Street?

ICE: You know? But that was a mistake. He didn't have to say that. All he had to do was say, hey, I'm a white kid, I'm trying to rap, and I want to be accepted. You don't have to lie and say you're from someplace you're not, you know?

PAULA POUNDSTONE: Well, wait a minute, when you say the street, everybody's from a street.

ICE: You're right, from a street.

ICE: But when we say the street, that means you probably had to live off of being in the street. You might have had to survive on the street.

: Yeah, I mean I grew up on a street called Cinnamon Tree Lane. I don't think that gets me too phat.

: I don't think - next to Vanilla Ice, in fact. He was my neighbor. He was very nice at the time.

ICE: Yeah, you know what I'm talking about.

: I know. I don't think I'm going to try to get any rap cred based on that.

ICE: If he's got the bling, the girls and the cars, he don't need to make music then.

: Ice-T, we're delighted to have you with us. We have invited you here to play a game we're calling?

"Pimps Up, Pantyhose Down."

: I just have to take a moment to get over the fact we made Carl say that.

ICE: Pimps up, pantyhose down.

: Of course, you appeared in the documentary "Pimps Up, Hos Down." We thought we'd ask you about another kind of hose, pantyhose.

: Well, I know. Answer two out of three questions correctly, you'll win our prize for one of our listeners, Carl's voice in their home answering machine or voicemail. Carl, who is Ice-T playing for?

ICE: Can I apologize to the captain now?

: All right, here we go. This is your first question. Allen Gant Sr. was inspired by his wife to invent a garment which attached stockings to underwear, but he didn't originally call it pantyhose. The first commercial pair went on sale in 1959, and was called what? A, Gant's Miraculous and Amazing Toning Textile; B, panty legs; or C, footed britches.

ICE: Where was this guy from?

: I don't know. Probably not the street, would be my bet.

: His name was Allen Gant Sr., the inventor of what we now know as pantyhose. But he called it either - when he invented it - Gant's Miraculous and Amazing Toning Textile, panty legs, or footed britches.

: Footed britches sounds good. It does. I'd buy them. But they were panty legs. Panty legs is what they were called.

: All right, two more chances. Here we go. Pantyhose, it turns out, are not just for wearing anymore. In fact, according to the blog Lifehacker, people are using them how? A, to build massive slingshots for monthly panty fights; B, to stuff with crepe paper, tying them on, and attending four-legged parties; or C, to keep their onions fresh.

BLOUNT JR: Is that a euphemism?

ICE: How about the onion one?

: How about the onion one? You're right, sir, the onions. Very good.

: Put them in pantyhose, you hang them up, they stay fresh.

: You talk about the madness in my youth, that's what we're talking about. All right, this is great. You got one right with one to go. You get this right, you win it all for the good captain. According to MSNBC anyway, more and more men are wearing pantyhose. On men, though, they're most commonly called what? A, mantyhose.

ICE: Why would a man wear pantyhose?

: Don't ask me, ask MSNBC. Just for that smooth feeling.

DICKINSON: Just in case you get your knickers in a twist.

POUNDSTONE: Or to hide his onions.

: The last one is - here we go, I'm going to give him all your choices. Was it A - are they called A, mantyhose; B, smoothers; or C, boxerhose?

: Mantyhose. I don't know what this is going to do for your cred, man, but you're right.

KASELL: He had two correct answers, Peter, so Ice wins it for Captain John Frederick.

: You're right, you can be successful in anything you do. I think you're a lesson for today's youth.

: That's good. Ice-T is a rapper and an actor. He stars in "Law and Order: SVU." Ice-T, thank you so much for being with us today. Great pleasure to talk to you.