Accessibility links
Bangkok Burns After Thai Protest Leaders Surrender Downtown Bangkok became a raging battleground Wednesday as the army stormed a barricaded protest camp and the "red shirt" leadership turned themselves in to authorities, enraging demonstrators who fired grenades and set fires that cloaked the skyline in a black haze. 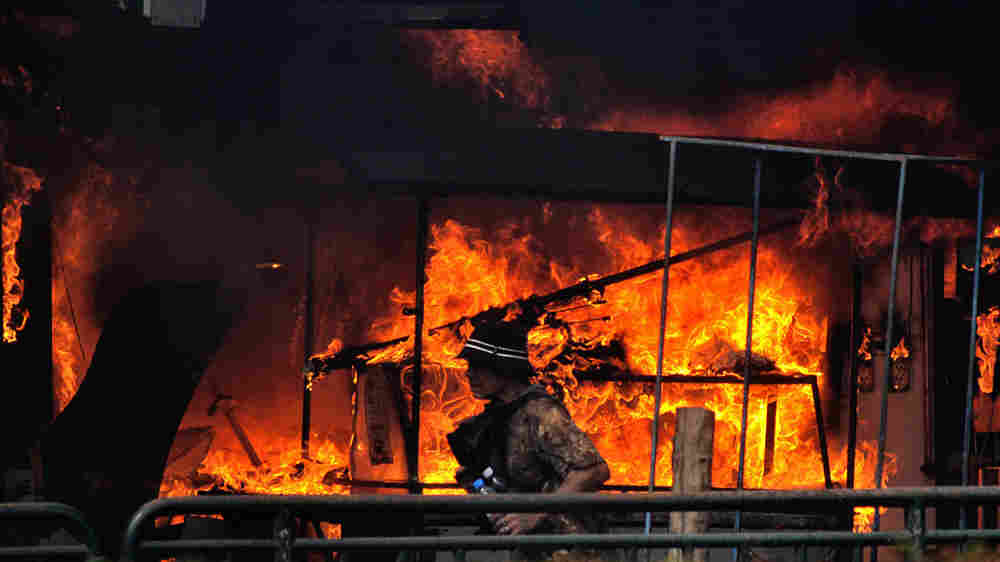 A Thai "Red Shirt" anti-government protester runs beside a shop set ablaze a few hours before the leaders of the movement announced their surrender Wednesday inside the protesters's camp in downtown Bangkok. Bay Ismoyo/AFP/Getty Images hide caption 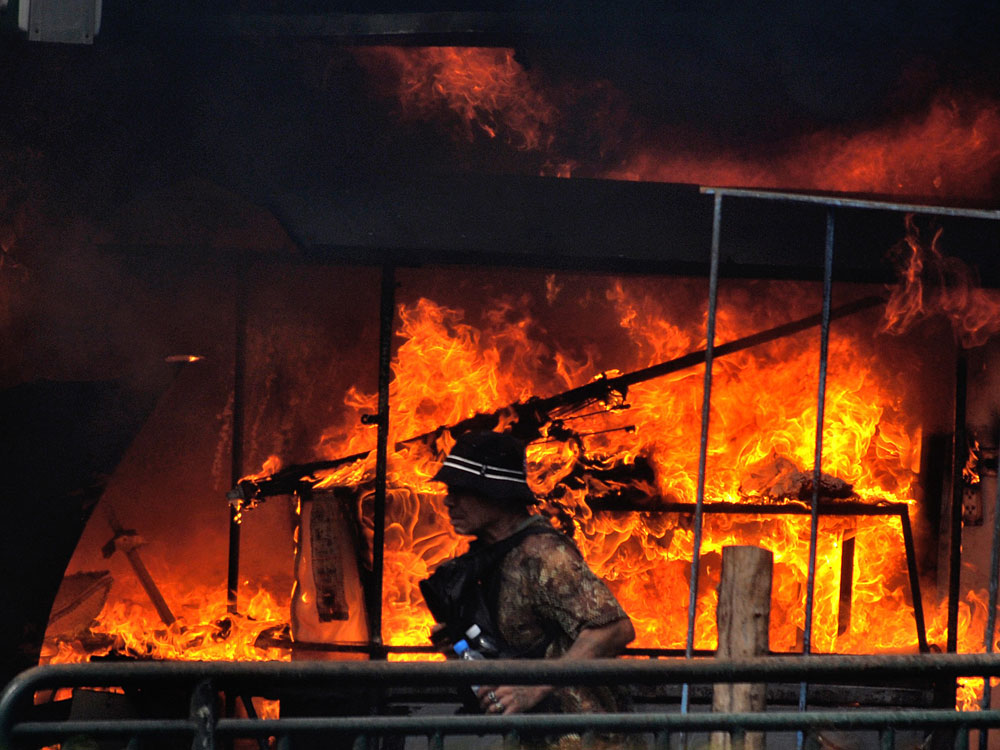 A Thai "Red Shirt" anti-government protester runs beside a shop set ablaze a few hours before the leaders of the movement announced their surrender Wednesday inside the protesters's camp in downtown Bangkok. 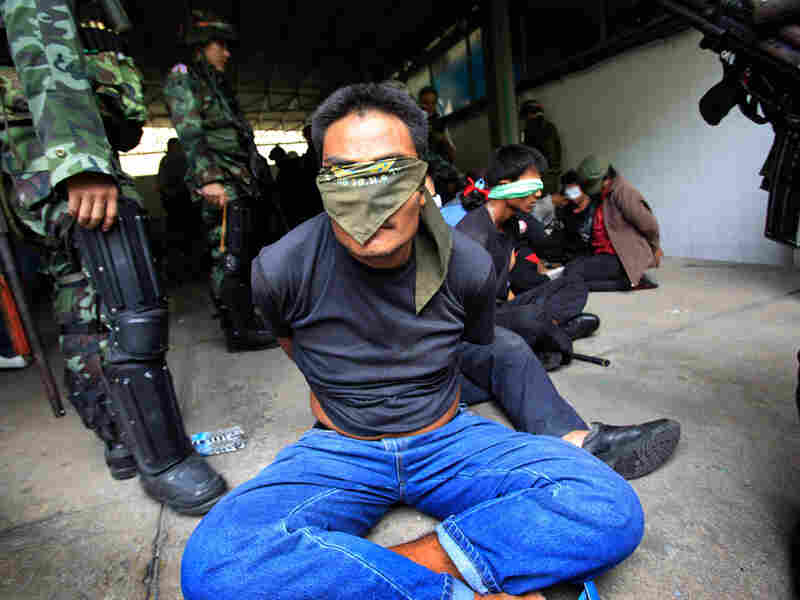 Anti-government protesters are held by Thai soldiers after being apprehended in their encampment Wednesday in Bangkok. Wong Maye-E/AP hide caption 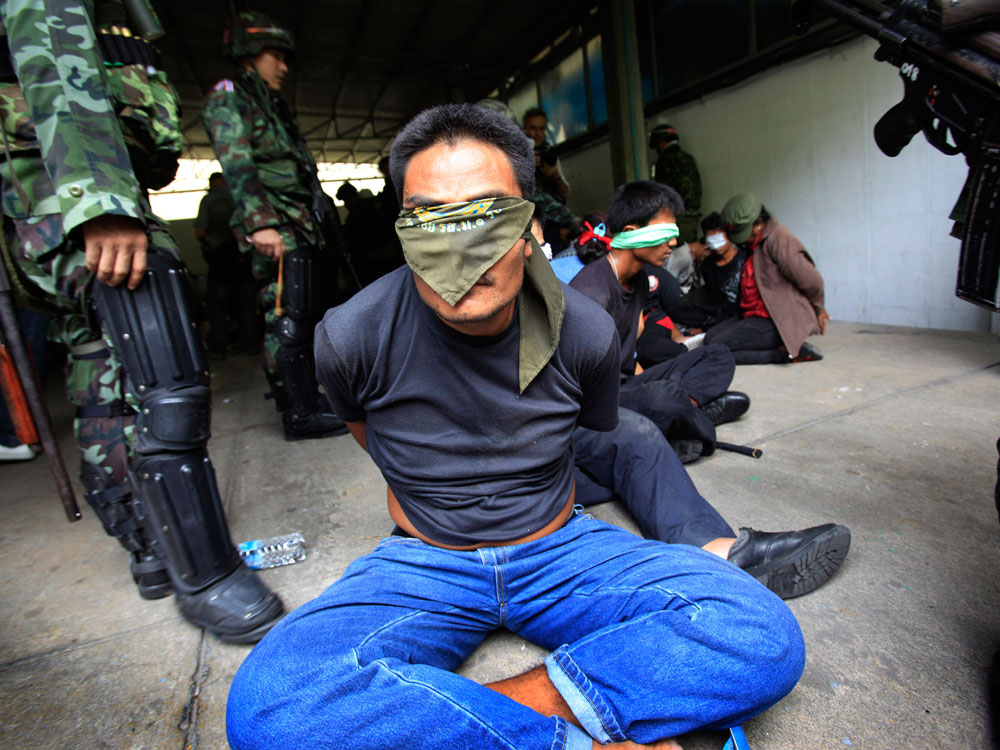 Anti-government protesters are held by Thai soldiers after being apprehended in their encampment Wednesday in Bangkok.

Thai soldiers stormed barricades and exchanged gunfire with protesters in central Bangkok in an apparent final push against anti-government "red shirts" after the movement's leaders gave up their weeks-long fight and surrendered to authorities Wednesday.

Smoldering debris from red shirt barricades constructed mostly of old tires and bamboo pikes littered the streets around the capital's premier shopping and residential districts, where protesters have been camped out. Army and police — firing live ammunition and using armored personnel carriers — kept up a steady barrage as they tightened the circle around the camps at dawn on Wednesday.

Six protesters and an Italian news photographer were killed and about 60 people wounded in the latest gun battles.

Seven top red shirt leaders turned themselves in to authorities Wednesday afternoon saying they could not bear further bloodshed, marking the official end of the protest that began in early April.

"Brothers and sisters, I'm sorry I cannot see you off the way I welcomed you all when you arrived here. But please be assured that our hearts will always be with you," Nattawut Saikua, a key leader, said as he was being arrested.

At least 44 people, most of them civilians, have been killed in a week of violence in Bangkok as the military attempted to dislodge the protesters. Renegade army Maj. Gen. Khattiya Sawasdipol, also known as Seh Daeng — or Red Leader — was shot in the head while being interviewed by a Western reporter and died several days later. Protesters say the bullet came from an army sniper, though it's not clear who fired the shot.

The army declared the situation "under control" Wednesday even as some rank-and-file red shirts defiantly turned to arson and looting as soldiers closed in. The protesters hurled grenades and set fire to one of the country's biggest shopping malls, as well as the Thai stock exchange, several banks and the headquarters of the Metropolitan Electricity Authority.

The anti-government anger extended to the country's northeast provinces, the heart of the red shirt movement, where town halls in Udon Thani and Khon Kaen were torched.

Protesters also vented their rage on the local media, which they accused of pro-government bias. The offices of state-run Channel 3 TV where set ablaze. The English-language Bangkok Post newspaper evacuated its staff after protesters' threats.

In a televised address, a top law enforcement official said police would fire on anyone caught looting or committing arson. "Police and soldiers were instructed to resolve the situation and use weapons to deter or prevent those acts," said Tharit Pengdit, director-general of the Department of Special Investigation. 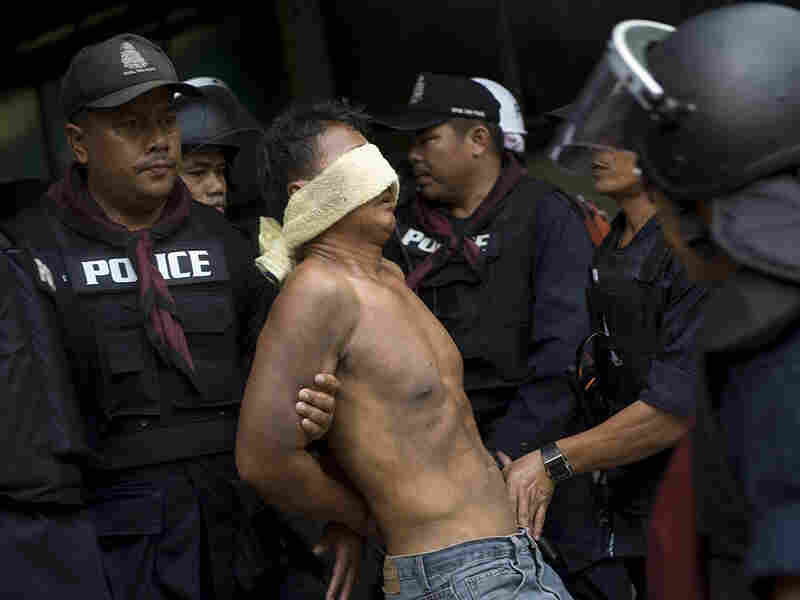 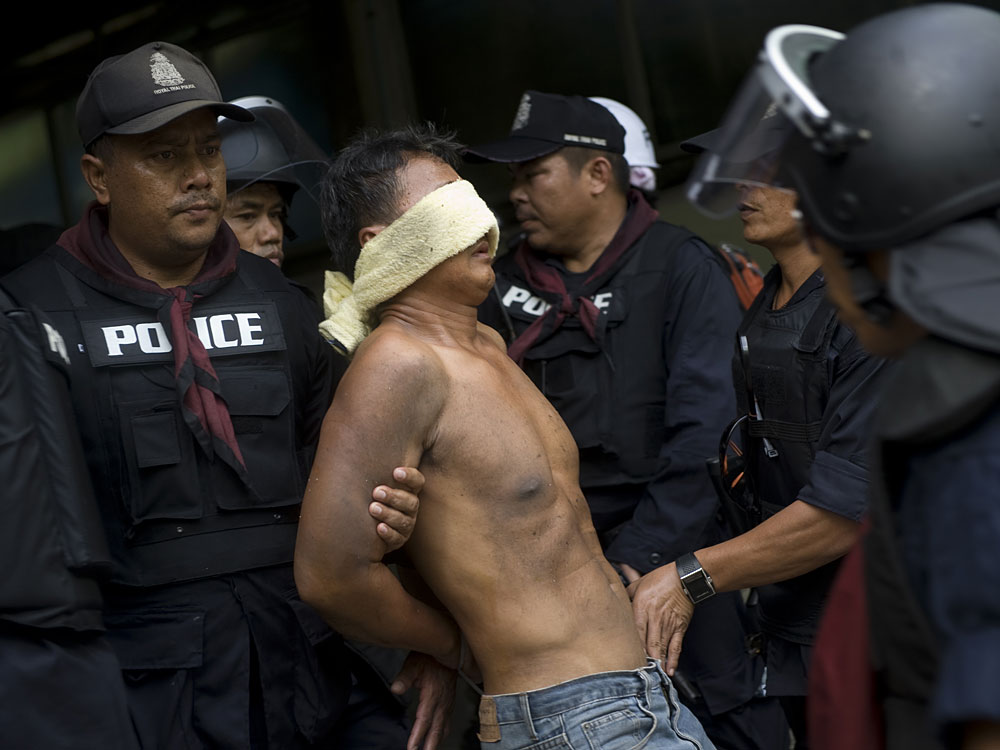 A Red Shirt protester is detained by Thai policemen inside the Red Shirt anti-government protesters' camp Wednesday in Bangkok.

Thai Prime Minister Abhisit Vejjajiva imposed a curfew in Bangkok, a city of 15 million people, and 23 other provinces from 8 p.m. Wednesday until 6 a.m. Thursday. It is the first time the capital has been put under curfew since 1992, when the army killed dozens of pro-democracy demonstrators seeking the ouster of a military-backed government.

Wednesday's army operation was the culmination of a standoff between the red shirts and Abhisit's administration that has drawn tens of thousands of anti-government protesters into the capital from the surrounding countryside in recent weeks.

The protesters, who hail mostly from the country's poor, rural northeast, had demanded that Abhisit resign, that Parliament be dissolved and that new elections be held immediately.

The government has accused ousted Prime Minister Thaksin Shinawatra of orchestrating the latest demonstrations, and The Nation newspaper reported that Thailand's Criminal Court had approved arrest warrants for Thaksin, who is living outside the country, and nine others, on charges of terrorism.

The protests are only the latest in a struggle between Thailand's haves and the have-nots.

When Thaksin took office in 2001, he instituted a range of populist initiatives such as a low-cost health scheme and microloans aimed at poor rice farmers. The measures won him fierce loyalty in the northeast but angered the elite in Bangkok and other large cities.

The prime minister was deposed in a 2006 coup and went into exile. His allies returned to power in post-coup elections, but opposition "yellow shirts," comprising mostly the country's relatively well-off urbanites, took to the streets and later seized both the prime minister's compound and the country's airports.

The pro-Thaksin government was later forced out by a court order, paving the way for Abhisit.

The political uncertainty calls into question the future of the country's monarchy, now presided over by the ailing octogenarian Bhumibol Adulyadej. The king is revered by Thais and has at times used his immense moral authority to calm unrest. Bhumibol's passing would bring his unpopular son to the throne — and many believe increase the power of the military, which has toppled 18 governments since 1932.

Many analysts thought Thailand had turned a corner after 1992, when a series of civilian governments changed hands without a power grab by the army. That period continued uninterrupted until the September 2006 putsch.

Even so, Thailand, a key U.S. ally in the region with a thriving export market and tourism industry, is seen as one of Asia's more stable economies. The bloody end of the red shirt campaign could change that perception.

Michael Sullivan and Patricia Nunan reported for NPR from Bangkok; material from The Associated Press also was used in this report