Accessibility links
School Days Lift Spirits In Quake-Ravaged Haiti At least some parts of life are returning to something like normalcy four months after the disaster. The streets of Port-au-Prince are filled with children in school uniforms. A $6 million emergency construction program is creating about 50 temporary structures where classes can be held.

In Haiti, one of the strongest signs of life returning to normal four months after the earthquake is that each morning, the streets are once again filled with children in school uniforms.

Reopening the classrooms was a huge challenge. Many school buildings were destroyed. Others were quickly occupied by people who had lost their homes and had nowhere else to live.

The Ministry of Education has been constructing simple, open wood-frame classrooms to hold schools until more permanent structures can be built.

One example is the St. Jean L'Evangeliste school in the Turgeau section of Port-au-Prince, which was destroyed in the earthquake. Now almost all the debris from the previous building is gone, with the exception of some shattered cinder blocks tossed to the edge of the lot.

Classrooms of plywood walls and corrugated metal roofs stretch to the back of the property.

And students have returned, like the group of fourth-grade boys who were recently shoving each other around on the concrete basketball court, yelling and laughing. 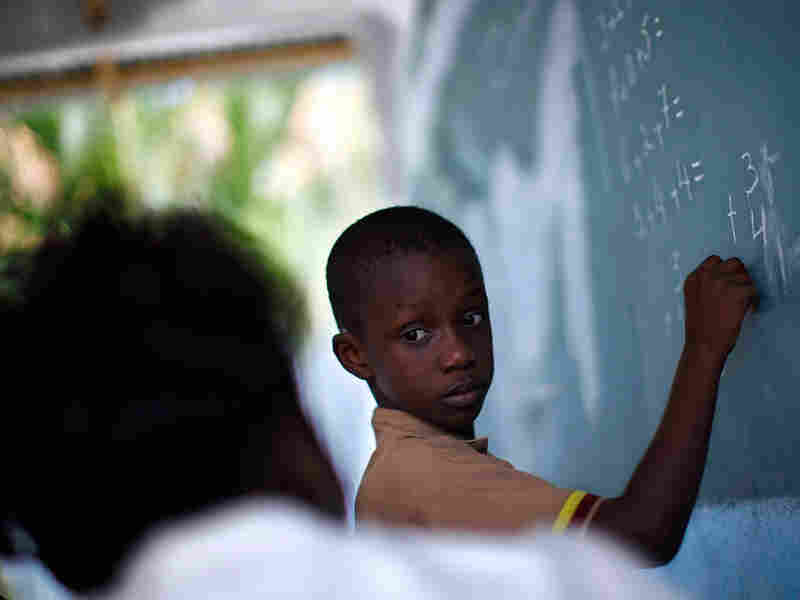 At his school in Port-au-Prince, Lochard Samael, 6, works on a math problem with his teacher. He lost his father in the Jan. 12 earthquake but has since been able to return to school. David Gilkey/NPR hide caption 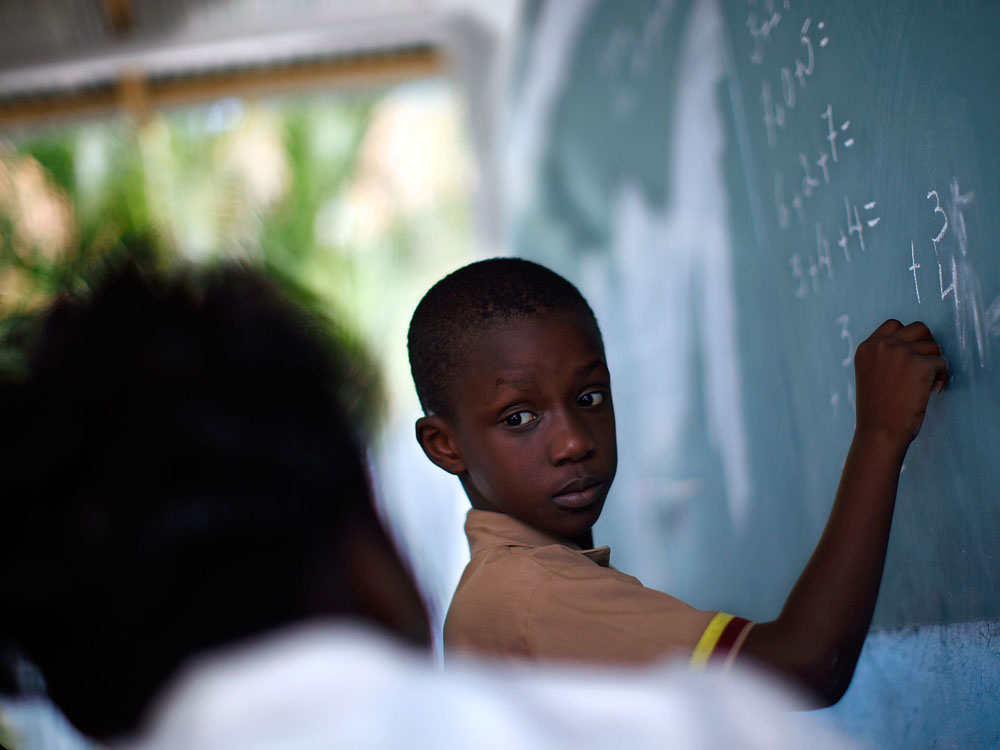 At his school in Port-au-Prince, Lochard Samael, 6, works on a math problem with his teacher. He lost his father in the Jan. 12 earthquake but has since been able to return to school.

The Rev. Nelson Augustin, the school's principal, says the old school had 29 classrooms, a library with 5,000 books, an auditorium and a computer lab. Now all they have are the simple classrooms with rows of desks facing a single blackboard.

But he says the reopening of his school in mid-April has been a huge blessing.

They're kids, Augustin says, so they have a big capacity to jump quickly between happiness and sadness.

Augustin says the biggest problem facing the school right now is that families can't afford the roughly $50 a month in tuition. Parents have lost their homes, their jobs, often all their savings.

He says the school cut the tuition by 25 percent, but still many people are struggling to pay.

The Inter-American Development Bank has given $6 million to build 50 schools like St. Jean L'Evangeliste. Some are finished. Others are still under construction. Most will be in Port-au-Prince. When finished, the temporary schools will provide classrooms for 65,000 students.

The Rev. Leingkone Arnaud at St. Jean L'Evengeliste says the lightweight walls are actually reassuring to many students who are still traumatized by the earthquake. "Definitely the children feel much safer," he says -- especially since there are no heavy concrete walls to fall down on them.

Eventually the school will be rebuilt with solid walls, but even the principal has no idea how long it will take to find the money and resources to do that.

At 1 p.m., parents stream onto the grounds to pick up their young children.

Abigail Toussant has come to collect her 6-year-old, Uri.

Toussant says she's happy to have her son back in school. They live in a tent with 22 other people.

She says for weeks on end, Uri was bored and starting to misbehave. He was always asking her why they couldn't rent a real home. She had to keep explaining that houses across Port-au-Prince were destroyed and there aren't even any left to rent.

Toussaint adds that one of the hardest things right now is that there's no privacy in the tent. If you want privacy, she says, you close your eyes and go to sleep.

She says that except for not having a home, things are returning to normal.

And especially for Uri, the reopening of school is a big part of making their daily lives feel like they're getting back on track.