Accessibility links
Maybe Someday Love Will Cure Despair Host Michel Martin offers an emotional commentary on the death of her only brother, Norman McQueen Jr., who recently committed suicide. She says she hates that her brother chose to end his life, but hates even more that his despair felt inescapable. 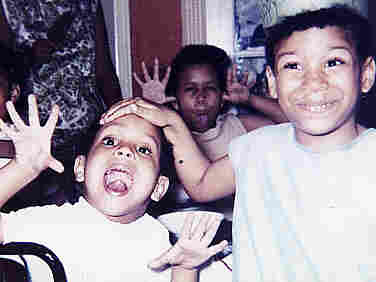 I want to talk about something really hard for me. (The subject may not be appropriate for our younger listeners, so you can be ready to turn the dial if you see fit.)

And with that being said, I want you to hear the voice of a very good man — my brother, Norman McQueen Jr. I interviewed him for this program on the sixth anniversary of Sept. 11:

Norman McQueen: I have a whole different outlook on life. I'm a little hesitant to make long-range plans about anything. I think that, if there's something you want to do in your life, if there's a vacation that you want to take or some place you want to see, I think you should do it now and not wait for retirement or plan too far ahead. And that's the way I feel about life now.

Norman McQueen Jr., was a firefighter in New York City, in a privately funded unit called The Fire Patrol. He worked at Fire Patrol No. 2. His firehouse name was "Mac." His friends called him Wade.

My sister and I just called him Brother.

He was funny, handsome, kind at heart, physically strong, an extremely devoted father, a loving husband, and a supportive, if occasionally annoying, little brother.

Two weeks ago, today, he took his own life.

I'd be lying if I tried to pretend I'm not angry. (Stages of grief, and all that.) The only problem is, I can't figure out exactly with whom or what I should be angry.

Should I be angry with the Sept. 11 hijackers who flew the plane into the building that crushed the rig he sometimes drove, and one of his closest friends along with it?

The macho culture that made him reluctant to get help, even though the recurring storms of grief and rage that washed over him after Sept. 11 cost him his first marriage and threatened his second? 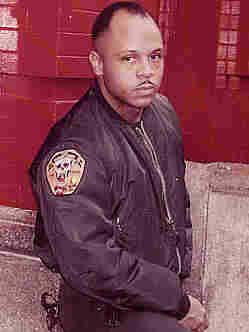 Should I blame the inconsistent — and, perhaps, even incompetent — care he got when he finally did seek help?

The job that disappeared due to budget cuts? The recession that left his home stripped of value?

Should I blame his brain circuitry? ... Our gene pool?

Because I am a journalist and I have been trained to research things, I now know that in this country death by one's own hand is more common than by the hands of others. Some 33,000 people took their own lives last year — that we know about.

That's almost twice as many people as were murdered.

In both circumstances, the deaths that receive public attention are few and far between. My brother's death did not, so far as I can tell, merit a paragraph in any of his hometown papers.

And I understand that. He wasn't famous, although his picture appeared in the newspaper once when he responded at the scene of a terrible crash. But that's about it.

His death didn't shatter the earth, just our world.

Now, I know some people think taking your own life is a selfish act, but I cannot bring myself to see it that way. I see it as self-less, in the sense that you come to believe your self has no value; that everyone would be better off without you.

I think my brother thought he was a failure, that with his long bout of unemployment he could not live up to what was expected of him as a man, and that we'd all be better off without him.

He was so wrong.

My brother was a good man. He was the first to offer to carry a bag of heavy groceries, to push a wheelchair up a steep ramp, to change a stranger's tire on a rainy night.

Years ago, when I was a newspaper reporter and working on a story in New York, he insisted on driving me to all my interviews because he thought I had been out of the 'hood too long and might not be able to handle myself. (I didn't have the heart to tell him that I had just had my car windows bashed in on the assignment I had just finished, and lived to tell about it. And I tried to remember not to mention it when I climbed up into an office building that had just been bombed.)

I am telling you all this because I refuse to be ashamed.

I refuse to be ashamed of him, or what he did. I hate what he did to himself but I hate even more whatever it is that caused him to feel that his life had no value.

Years from now, maybe there will be a pill you can take to stop this. Maybe — like the premature babies we can now save or some illnesses we can now treat — maybe, we will find a way to treat despair.

Until then, I hope that those who cannot see a way out of their own particular darkness will think of another good man — and think of how much he was loved and is missed — and will remember that they, too, are loved and will find some way to see the light.

Michel Martin: Do you think that there will ever come a time when you don't think about it — your experience at 9/11?

Norman McQueen: No. It's one of those things that ... it'll stay with me. It'll stay with everybody who's down there [and] who survived it.

Michel Martin: Well, thanks for talking to me.

Norman McQueen: Thank you for having me. Say hello to Billy and the babies.

Michel Martin: Oh, sure. I love you.

Norman McQueen: I love you, too.