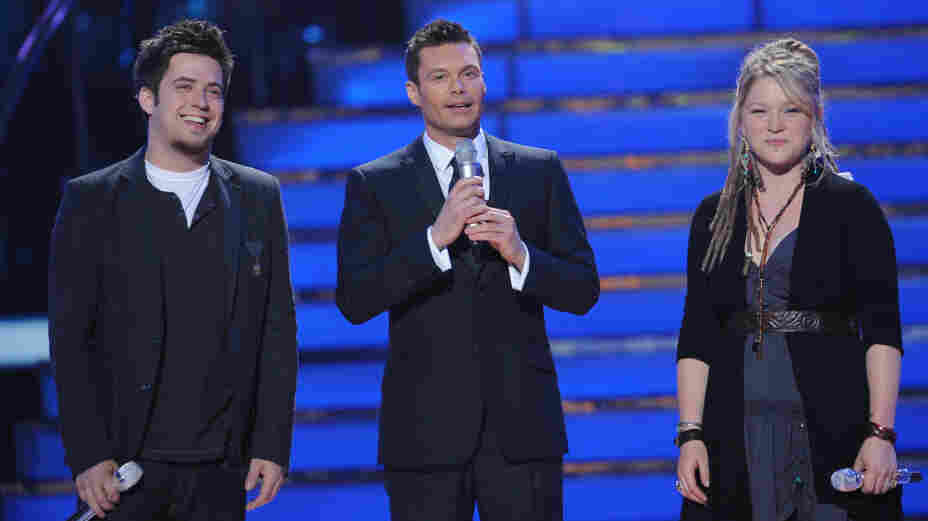 Lee DeWyze, Ryan Seacrest and Crystal Bowersox will all be around for tonight's finale of American Idol. Michael Becker/Fox hide caption

Even people who are not Crystal Bowersox partisans might be inclined to admit that she blew Lee DeWyze off the stage last night on the final performance episode of American Idol.

He's not without talent, but his pitch problems were worse than ever, and he seemed utterly adrift with his performances, in particular, of REM's "Everybody Hurts" and U2's "Beautiful Day." ("Everybody Hurts" was really, really problematic, pitch-wise.) More than that, something or other (I suspect nerves) made it impossible for him to moderate his singing at all. There were no changes in intensity, or dynamics, or mood. Everything was at about a level 7, all night long.

Crystal, meanwhile, had maybe her best night of the season (aside from her "People Get Ready"). She struggled a little with "Black Velvet," which forced her into a less interesting version of her gravelly-voiced delivery, but she rallied with "Up To The Mountain," which she -- like Kris Allen last year when he performed "Heartless" -- performed in a stripped-down manner that avoided the temptation to crank everything up to a massive level of production.

I'm still pretty confident that she's not going to win.

Why? Well, I have a theory. As Stephen and I noted yesterday, this season has really failed to break through with a wide audience. Ratings are down, it feels like nobody cares, and there's very little enthusiasm about the show. That leaves even more of the voting to die-hards than you'd otherwise find. It's always a die-hard sort of pursuit, voting for a show like this, but the less the casual fan is paying attention, the more you leave the entire thing to power-voting superfans.

And power-voting superfans of American Idol will always be more available to good-looking young men than to bohemian moms. There simply is not a subculture that creates the kind of fan bases for people like Crystal that gets created for guys like Lee. She doesn't have his access to the subset of Idol fans made up of the women and girls who are the underwear-throwers of the future. Again, this is not Lee's fault. He didn't create society, Idol's marketing efforts, or fandom as a force of nature. And before you e-mail me, of course not all of Lee's fans or voters are future underwear-throwers, by any means. Preferring him does not make you a power-voting lovesick swooner. But power-voting lovesick swooners are an entire, very enthusiastic subset of fans who are likely to vote a lot and are available to him far more than they are to her.

And the thing about superfans is that they do not react to the quality of individual performances. Superfans do not vote any less if you have a very bad night, as Lee did. They vote for you just as enthusiastically no matter how you sing, because they aren't voting for your performance; they're voting for you. So for these people, having a rough final night of performances makes absolutely no difference. Won't hurt him at all.

It's not a factor that can't be overcome, but it's a factor. Crystal is not the kind of person who inspires superfandom. What really wins this show is your ability to accumulate people who would say that their fandom of you is the most important thing they're doing right now and to avoid being so polarizing that people will vote against you. (Oh, and preferably, don't face off against anyone from the South, because they will beat you.)

Lee doesn't inspire anti-Lee voting, but he does inspire enthusiastic superfans, far more than Crystal does. She was better than he was on Tuesday, just as she has been all season, but that's unlikely to make her the winner, when it comes right down to it.