Accessibility links
'American Idol' Wraps Its Dull Season As American Idol closes out a dull season, we look back at the two-hour finale, its parade of past and (probably not) future stars, and its Simon Cowell tributes. 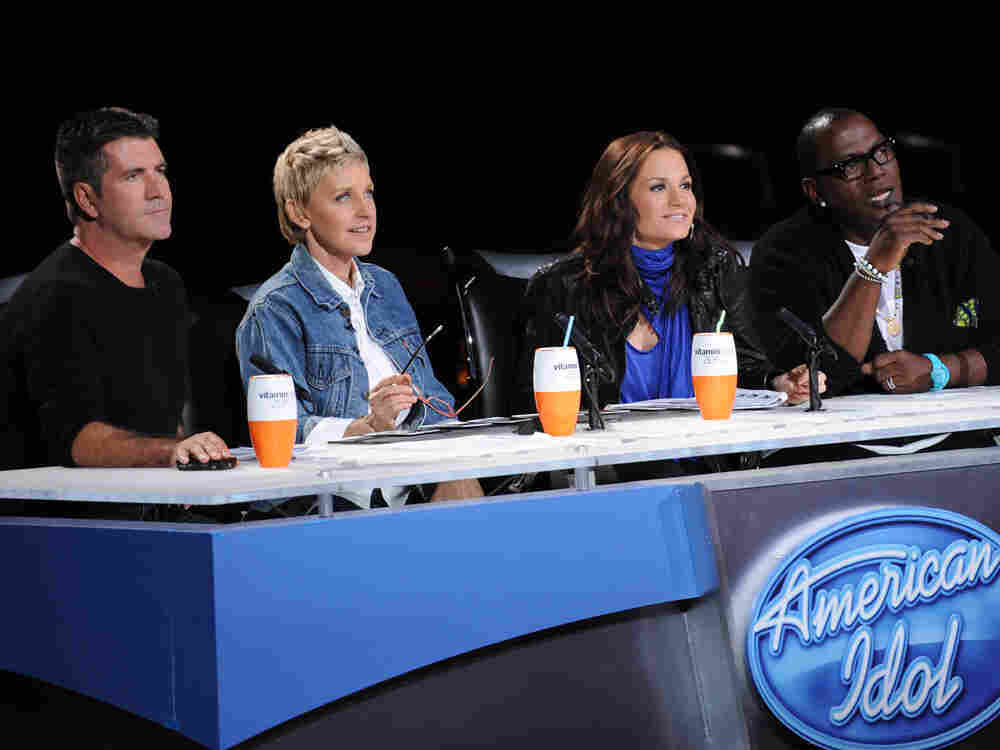 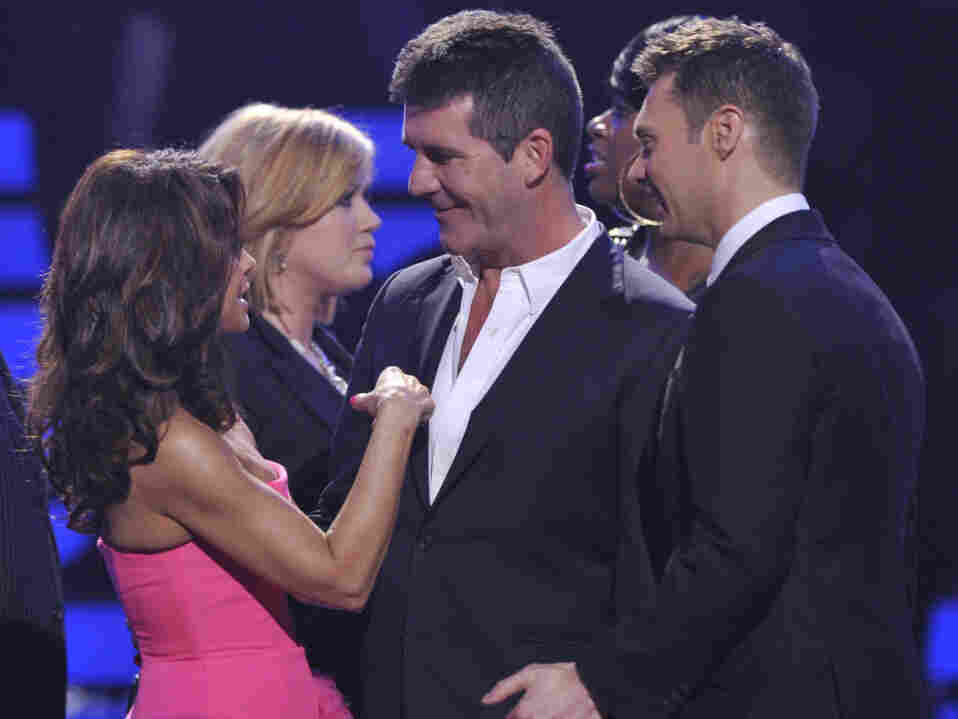 Paula Abdul dropped by to say farewell to Simon Cowell on the American Idol finale, which capped the show's dullest season yet. Vince Bucci/Fox hide caption

American Idol crowned its ninth champion on Wednesday night, after a finale full of musicians who were famous long ago and other Idol contestants who are already only half-familiar. Cramming in its actual results after two hours of nostalgia acts and tributes to departing judge Simon Cowell, the show waited a long time, but eventually did reveal who was walking away as the winner.

In the end, as predicted, growl-pop-rocker Lee DeWyze took the crown over coffee-house specialist Crystal Bowersox. This, in itself, seemed almost anticlimactic, and the show devoted little attention to it.

What got a lot of attention was the Simon Cowell Farewell Revue that took over the theater. Montages were plentiful (Simon Cowell laughing, Simon Cowell flirting, Simon Cowell touching his own chest), and a couple of celebrities even contributed their thoughts. Polarizing comedian Dane Cook performed a song made up of Cowell insults (a format that robs said insults of the ice-blooded boredom with which Cowell always delivered them, which is what made them funny), and even departed judge Paula Abdul returned in her version of triumph to offer a loopy roast of her onetime nemesis.

One of the nicer moments in the two-plus-hour show, in fact, came when a collection of former contestants hit the stage for a fittingly treacly ballad in Cowell's honor. Not only seven of the eight winners (everyone but David Cook, including actual famous singers Kelly Clarkson and Carrie Underwood), but many of the also-rans (including runners-up like Blake Lewis and Justin Guarini and farther-downs like Constantine Maroulis and Ace Young) showed up, and it actually made for a lovely little tribute. Idol may only have a couple of superstars to its credit, but it can claim a long line of people who at least got the opportunity to make a record (or, as the case may be, to hit Broadway or some other circuit). 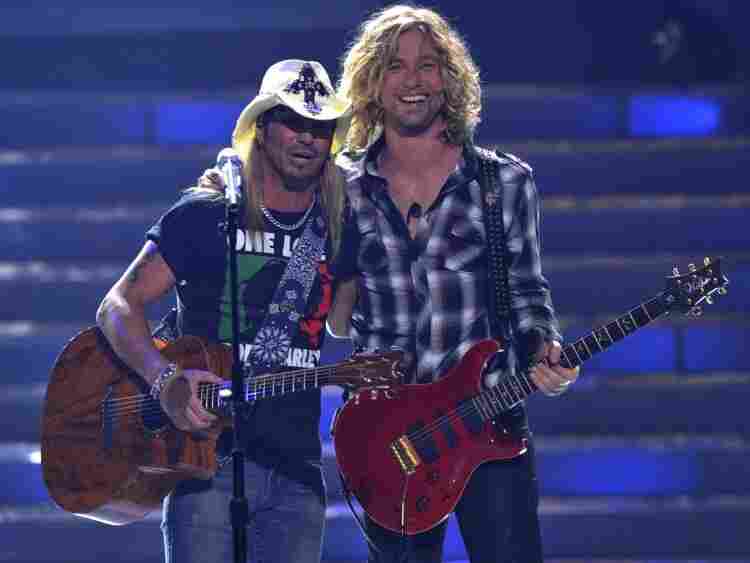 But hands-down, the best moment of the finale involved an appearance by Bret Michaels, the Poison singer who has seemingly been hospitalized with everything but scurvy in the last few months. Just a few days ago, his appearance on the finale of The Celebrity Apprentice (which he won) was treated like a medical miracle, but here, he and his bandana and his guitar moseyed on stage with Casey James for the obligatory retelling of "Every Rose Has Its Thorn," and darned if it wasn't a little bit effective. 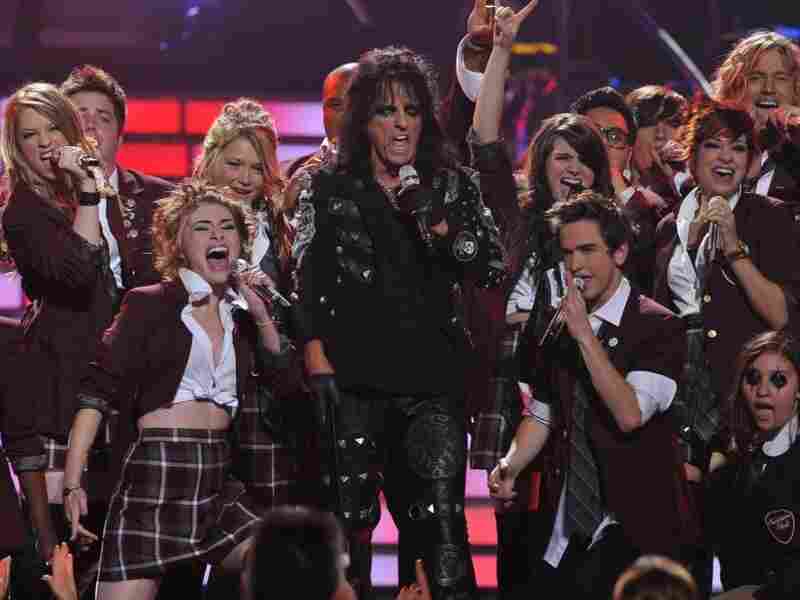 Other than that moment, however, the finale was mostly an agonizing collection of pairings between Idol contestants and performers who are or were big enough for Idol to want them, but are not currently big enough to turn it down. It all started with Alice Cooper, who strolled on stage to sing "School's Out" with the Top 12. You might think he would find this damaging to his image, but he also appeared on The Muppet Show in 1978, so this is not his dignity's first rodeo.

The most painful appearance came from Chicago, which was paired for a medley performance with DeWyze on the apparent justification that DeWyze is ... from Chicago. This is literally the thinnest thread ever conceived from which to dangle a musical collaboration. The band has very little voice left, the mix seemed to be compensating for that by burying the vocals, and the result was embarrassing and sloppy.

Embarrassing in a different way was Bowersox's appearance with Alanis Morissette for a clumsily bowdlerized version of "You Oughtta Know." Morissette has plenty of songs; it's not clear why the show would pick the one with the rather famously explicit reference to public sex, only to yank it in favor of a replacement line not matched in silliness since all the kids in The Breakfast Club started yelling "FLIP YOU!" on basic cable.

Some of the acts did better: Daryl Hall and John Oates remain really game, and they had a big year after "You Make My Dreams Come True" turned up in both (500) Days Of Summer and a famous YouTube video featuring backwards lip-syncing high school students. They fare pretty well in these things, and Hall can still sing enough, so their work with the gang of Top 12 boys was okay.

Christina Aguilera didn't sing with the Top 12 girls so much as after them, but she, of course, still holds up fine. Janet Jackson sounded all right, too, although seeing her revisit "Nasty," a song she wore a little better in 1986 than she does now, was a bit of a surprise.

A couple of the performances revealed just how much of a debt this show owes to its older fans: the Bee Gees showed up to perform "How Deep Is Your Love," while Michael McDonald himself joined Big Mike Lynche for "Takin' It To The Streets." The big gun was Joe Cocker, who sang "With A Little Help From My Friends" with Bowersox and DeWyze, and while she in particular was certainly bubbling with the excitement of the performance, it wasn't especially distinguished, musically speaking.

(A dilemma: Where, in this discussion, to discuss the obligatory performance of "Pants On The Ground," the viral sensation taken from the auditions, which ended with a bunch of guys on stage with their pants literally on the ground? Let's say "nowhere.")

Idol has been a juggernaut for years, but at the close of such a slow season, it does have a bit of the stench of the funeral parlor. Seeing Paula sitting on Simon's lap again was a grim reminder that they really were the only two judges who were any fun at all, and seeing past winners like Clarkson (hey, she was good!) and runners-up like Melinda Doolittle (hey, she was good, too!) only drove home how dull this crowd of finalists was from the beginning.

A panel featuring Randy Jackson, Ellen DeGeneres, and Kara DioGuardi cannot possibly succeed, and no matter who they line up for Simon's chair, the whole thing does feel a little ... over. (Not dumb, which is different and not new, but over.) It could always rise again -- Bret Michaels did, after all -- but the operators of this particular franchise had better be putting their heads together about how to get back on track next spring, or they're going to be devoured by Cowell himself once his new show, The X Factor, comes to television.