Accessibility links
Comedian Joan Rivers Is A Real 'Piece Of Work' Few topics are off-limits for the brash comedian: She has joked about her many face lifts, her husband's suicide, her bankruptcy and the sacrifices she made as a female performer. A new documentary, Joan Rivers: A Piece of Work, follows the comic during her 76th year as she fights to still make people laugh.

Listen
Comedian Joan Rivers Is A Real 'Piece Of Work' 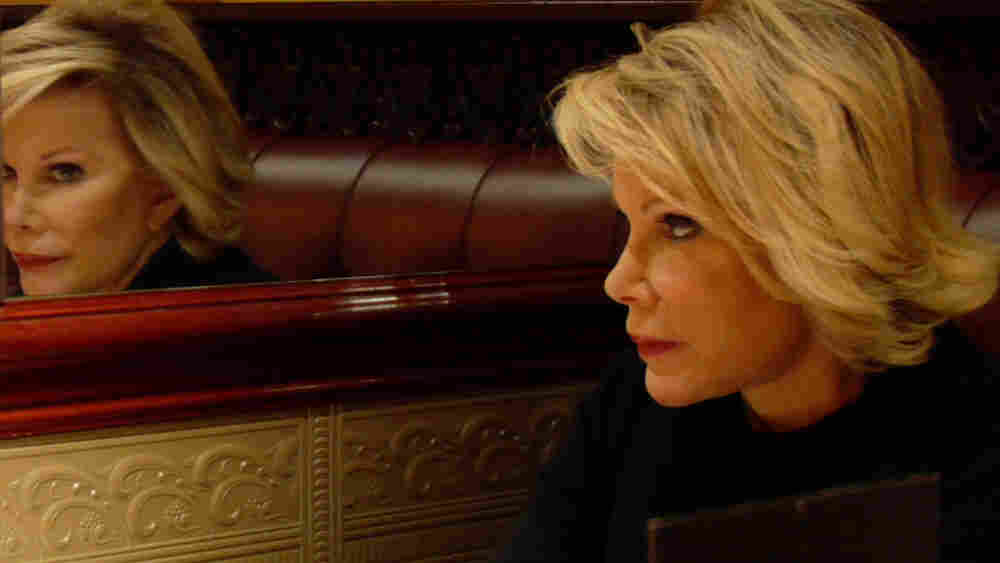 Joan Rivers says that she would like a "77th facelift" for her 77th birthday. The brash comedian stars in a new documentary about her career in comedy. Seth Keal/IFC Films hide caption

Joan Rivers - A Piece Of Work

'It's Going To Be A Long Evening'

'You Know The Dates We're Holding For QVC'

There aren't many topics Joan Rivers shies away from when writing her material.

Over her 50-year career, the salty comedian has poked fun at -- among other topics -- her many face lifts, her husband's suicide, her bankruptcy, and the sacrifices she made as a female performer.

Now 77, she tells Fresh Air's Terry Gross that her material has only gotten stronger with age.

"I am so much freer now," she says. "I always say, 'What are you going to do? Are you going to fire me? Been fired. Going to be bankrupt? Been bankrupt. Some people aren't going to talk to me? It's happened. Banned from networks? Happened. So I can say anything I want, and it has freed me totally."

Rivers, who started out writing gags for Candid Camera in 1965, was a regular guest host on The Tonight Show and frequently starred on The Carol Burnett Show and Hollywood Squares. She wrote 10 books, mainly about comedy -- and made frequent cameos in films, often playing a brash, New York-based comedian.

In more recent years, she has hosted pre-awards shows on E!, sold items on QVC and appeared on several reality shows, including Big Brother, Celebrity Apprentice (which she won) and How'd You Get To Be So Rich?

All are fodder in a new documentary about a year in the life of Rivers, called Joan Rivers: A Piece of Work. The film follows Rivers around during her 76th year as she fights to still make people laugh -- while dealing with the rejections and disappointments that are part of the comedy business.

Rivers says that even 50 years after she began her career, she's still trying to open doors for younger comedians.

"Comedians always go, 'Oh, you let women get on stage and say things. You let women look attractive on stage,'" she says. "I don't think there'd be a Tina Fey now if I hadn't tried to look good in the beginning. But I think of opening doors not just for women comedians -- I never think about women. I think just [that I'm] always trying to push for myself, push the boundaries [and] make them listen. Make them listen to the truth and laugh about it." 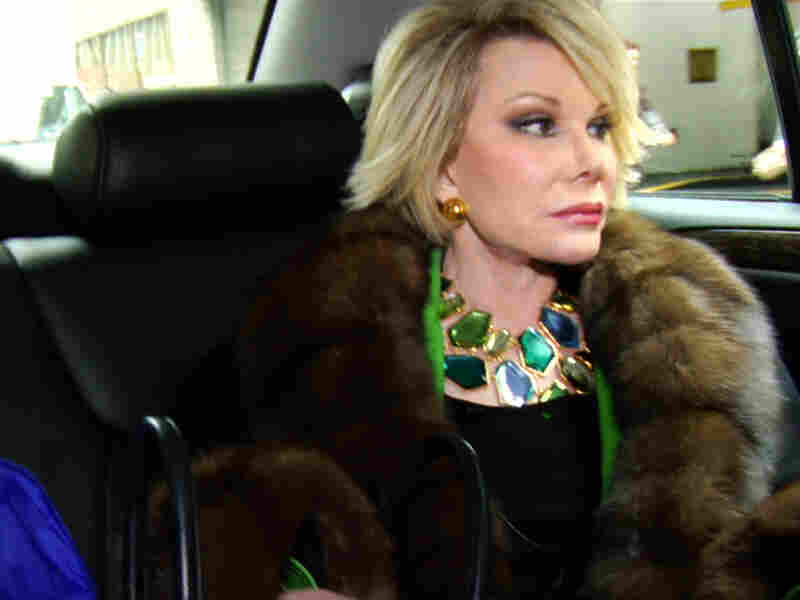 Peeling Away the Mask: Joan Rivers reveals both the struggles and thrills of her 50-year career in comedy. Seth Keal/IFC Films hide caption 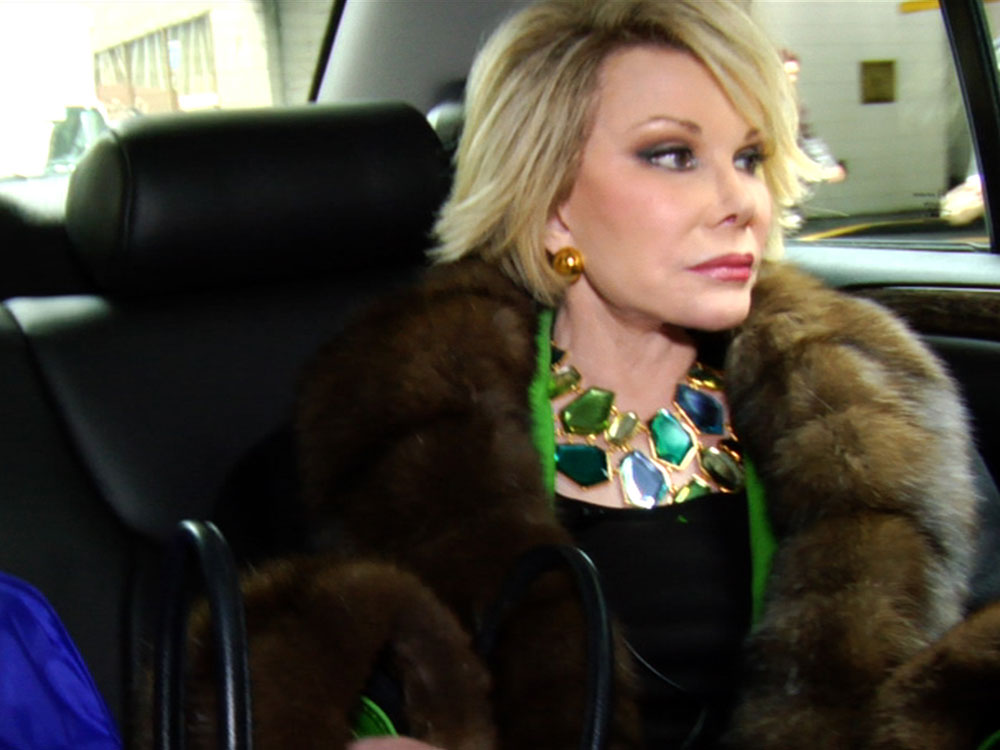 Peeling Away the Mask: Joan Rivers reveals both the struggles and thrills of her 50-year career in comedy.

"I just think you open up the doors and you laugh at everything. I was the first one to discuss abortion, and it was very rough. ... And I couldn't even say the word abortion -- I had to say, 'She had 14 appendectomies.' ... Everyone went to Cuba to get appendectomies. Or went to Puerto Rico to get appendectomies. That was a big thing. ... And by making jokes about it, you brought it into a position where you could look at it and deal with it. It was no longer something that you couldn't discuss and had to whisper about. When you whisper about something, it's too big and you can't get it under control and take control of it."

Terry Gross: "That's kind of a paradox to me that you live to be on stage and, at the same time, that there's this dread of being on stage."

Joan Rivers: "Not a dread of being on stage. A dread of not doing well. Of disappointing them."

On the worst thing that ever happened to her on stage

"Once somebody died in Las Vegas in the audience, but that wasn't the worst thing. I've died several times on stage. That's not like the worst. But one of the worst -- someone died at Caesar's Palace and they got that guy out so fast because they don't want anyone upset about anything and they rolled him out. The worst thing that ever happened to me on stage is someone ran forward to tell me they loved me and projectile vomited all over the stage. It was horrible. And I said to the audience, 'Shall we continue or shall we clean the stage?' And the audience said, 'Let's continue.' And I said, 'No, let's clean the stage.' That was horrible. Oh, God, it got on everything. The orchestra was gagging. Once somebody starts to vomit, everybody joins in. It was awful."

On being a working mother in the 1960s

"When I was pregnant, I was sitting with a very famous comedienne and her little girl in the park, and her little girl fell down and cut her knee -- and ran to the nanny. And I said right then and there, 'My child will run to me.' And I, from the beginning -- we stopped everything at 6 p.m. We always had a family dinner even if we went out afterward and had another dinner with friends. Everything stopped at 6. I would take the book and cross off everything that didn't have to do with Melissa. I was a Brownie Scout mother. And those uniforms. You don't know what I sacrificed for my daughter. I mean, Terry, please -- a Jewish woman in a khaki dress. Not to be believed."

Her thoughts on suicide after her husband committed suicide

"I still am angry. I work very hard with suicide survivors, as does [my daughter] Missy. 'Cause what it does to you -- the anger never leaves you. There's the sadness. When Melissa walked down the aisle, and it was 10 years after her father killed himself -- we both cried because Daddy wasn't there to walk her down. You never get over that and missing that part of it. But you're still so furious. What you did to us, what you did to your daughter, the selfishness of a suicide and what you've done -- you've just left all the pieces. And gone -- and you took the easy way. And it's not an easy way. It's very brave to do it, but it's a terrible, terrible, terrible thing to do to a family. It sends a bad message to the family, but it sends a lot of jokes if Mommy's a comedian. My first joke was, 'My husband killed himself and left a message that I have to visit him every day, so I had him cremated and sprinkled him in Neiman Marcus. Haven't missed a day.' And that's how I get through life, Terry."