Accessibility links
Extent Of BP's Liability Still Murky A group of Senate Democrats is seeking to raise the $75 million liability limit on economic damages under the Oil Pollution Act to $10 billion, but some legal experts say the very issue of a cap may be moot. 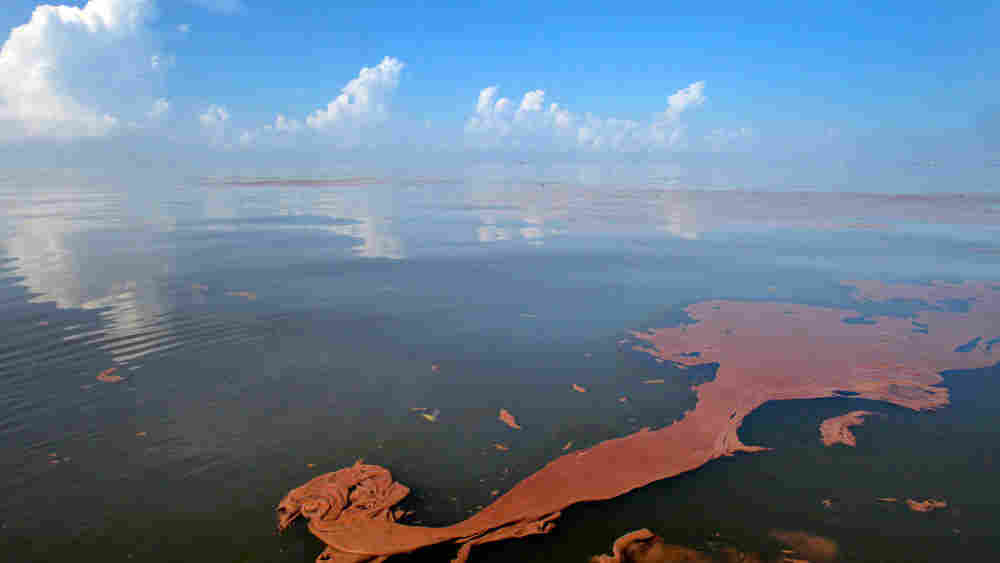 Oil from the Deepwater Horizon spill floated on the water Monday as the sky was reflected in sheen on Barataria Bay off the coast of Louisiana. Charlie Riedel/AP hide caption 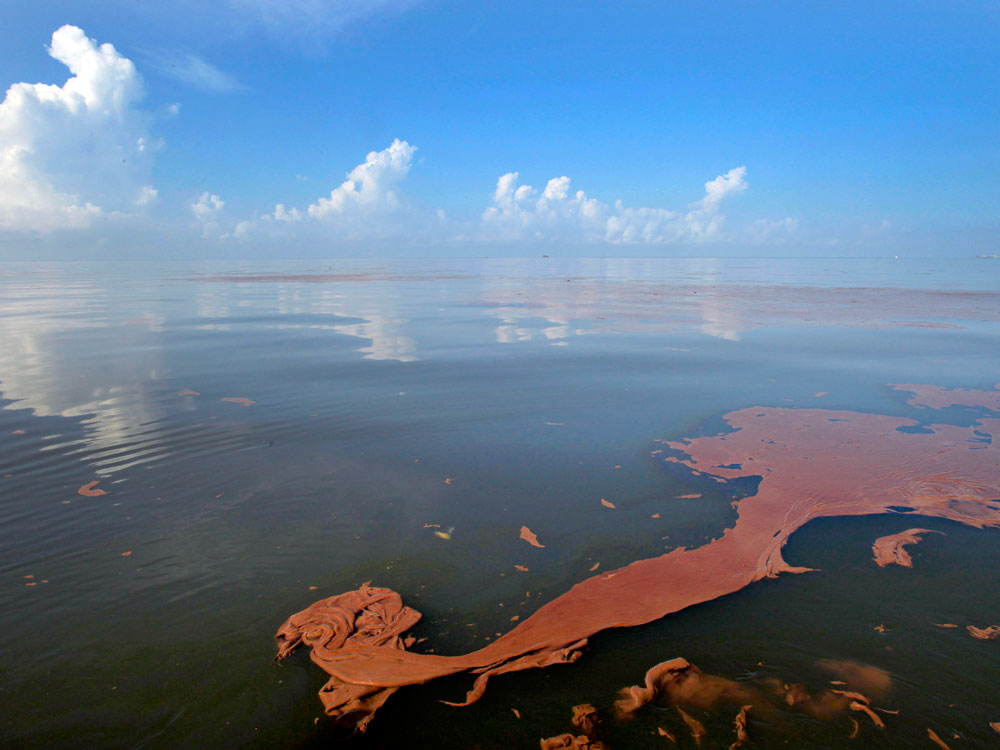 Oil from the Deepwater Horizon spill floated on the water Monday as the sky was reflected in sheen on Barataria Bay off the coast of Louisiana.

As BP struggles to cap the largest oil spill in U.S. history, lawmakers are considering a cap of their own — one that limits how much the company must pay for the disaster.

The White House said this week that it supports Democratic legislation to raise the $75 million cap on economic damages under the Oil Pollution Act to $10 billion. That would cover claims ranging from payments to individual shrimpers for lost wages to money for states to rebuild their tourism industries — and is separate from the expense of cleaning up the massive Gulf of Mexico slick.

Estimates of the total cost of the disaster vary widely, reaching as high as $40 billion. Because BP is self-insured, it would bear the full cost.

Senate panels were holding liability hearings this week, but some legal experts say the very issue of a cap may be moot.

Language already in the Oil Pollution Act, established after the 1989 Exxon Valdez spill, eliminates the cap if the party responsible for a spill is found to have been grossly negligent or violated federal regulations governing the construction, safety or operation of an offshore rig such as the Deepwater Horizon. The rig was destroyed seven weeks ago in an explosion that killed 11 workers.

It's "highly unlikely that the events of April 20 did not include one or more deviations from these codes," Rachlinski told NPR.

Vermont Law School professor Pat Parenteau agrees that what happened aboard the Deepwater Horizon very likely invalidated the liability cap. "I think the push to raise the cap and to find BP criminally liable is more of a signal than anything else," he said. 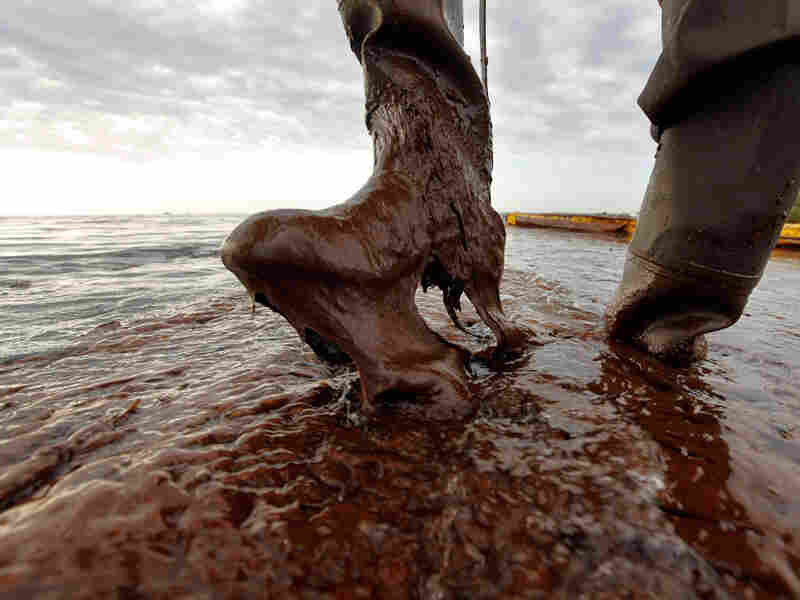 An official in Louisiana's Plaquemines Parish lifts his boot out of thick beached oil at Queen Bess Island in Barataria Bay, just off the Gulf of Mexico. Gerald Herbert/AP hide caption 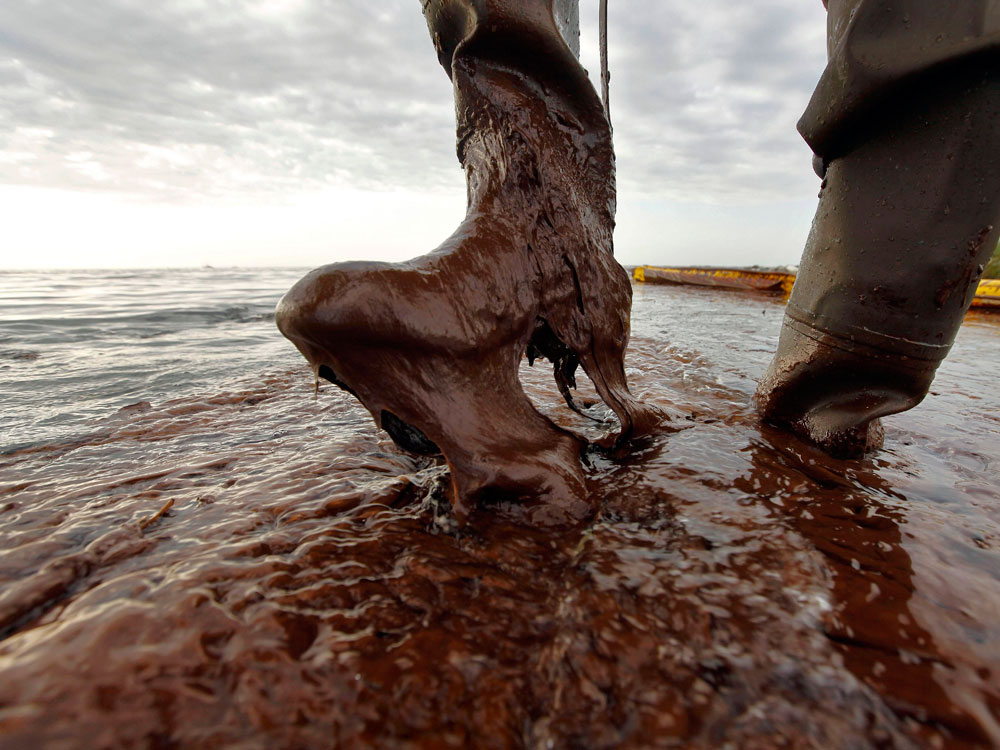 An official in Louisiana's Plaquemines Parish lifts his boot out of thick beached oil at Queen Bess Island in Barataria Bay, just off the Gulf of Mexico.

Attorney General Eric Holder announced last week that the Justice Department has opened a criminal investigation into the Gulf spill. The probe focuses on rig owner Transocean Ltd., rig operator BP and Halliburton Co., which was working on the well prior to the deadly blast.

"The initial reports indicate there may be situations in which not only human error was involved, but you also saw some corner-cutting in terms of safety," President Obama told NBC's Today show.

But Robert Menendez of New Jersey, one of three Democratic senators sponsoring legislation to raise the cap, says the law should be amended to guard against oil spills "now and in the future."

"The bottom line is that BP should be held fully accountable for the economic damage it is causing, no matter what," Menendez told NPR. "We have to get rid of the liability limit to protect any coastal community that gets damaged."

In May, Republicans blocked a similar move to amend the Oil Pollution Act. Sen. James Inhofe of Oklahoma charged that raising the cap on liability would be a boon to large oil companies at the expense of smaller ones.

I think BP is probably working as hard on an intricate litigation strategy as they are on capping the well itself.

BP has agreed to foot the bill for the Gulf cleanup and all "legitimate" claims. CEO Tony Hayward has acknowledged that the $75 million cap would "inevitably be exceeded," but a BP spokesman declined to say whether the company's actions at the time of the accident would negate the cap on liability.

The British oil giant says it has spent more than $1.2 billion so far on the disaster, including $49 million to pay out more than 40,000 individual claims. The company also has put $360 million in escrow to build protective barrier islands off the coast of Louisiana.

Experts differ on whether payments made to people affected by the spill will affect their ability to collect from BP in the future.

"We don't know exactly what the settlements say, but in all likelihood individuals are foregoing future claims," said Cornell's Rachlinski. He noted that in dire circumstances such as those in the Gulf region, people are particularly vulnerable to settlements "on the cheap."

But BP spokesman Jon Pack says that assumption has no merit.

"Whatever we pay [individuals] now does not preclude them coming back in the future," Pack said.

Vermont Law School's Parenteau agrees. Unless people receiving payments have signed an agreement to the contrary, "I would say [getting payments now] is not going to bar them" later, he said.

"I think BP is probably working as hard on an intricate litigation strategy as they are on capping the well itself," said Rachlinski.

Transocean, the rig's owner, is also liable under the law, and the question of how much it will ultimately pay is the subject of "backroom machinations, you can be sure of it," said Rena Steinzor, an environmental law professor at the University of Maryland.

"There is likely to be a huge amount of litigation between BP and Transocean, and that's where a finding of criminal negligence might make a difference," said Steinzor, who is president of the Center for Progressive Reform, a think tank dealing with health and safety concerns.

To prove criminal liability, the Justice Department must prove that a company as a whole knowingly violated federal regulations, Parenteau says. Such a finding, he says, could have implications for future drilling permits and cause the company to be blacklisted from federal contract work.

Any criminal charges would very likely translate into millions of dollars in fines. But for any company executives or workers to be indicted individually, legal experts say the Justice Department will have to find evidence they orchestrated a cover-up, destroyed key documents or lied to government agents.

"One of the issues that government investigators are going to be focused on is whether individuals from BP and the other companies have been completely forthright," said David Uhlmann, a University of Michigan law professor who spent seven years as chief of the Justice Department's environmental crimes section. "The cover-up is often more serious than the crime, at least in terms of the charges sought."

Prosecutors could seek serious jail time — five years or more — if they charge anyone with obstruction of justice, making false statements to the FBI or other U.S. officials or conspiracy to hinder a federal probe.

But Parenteau says he didn't think it was likely the Justice Department would go after company officials individually.