Accessibility links
Teen Sailor's Rescue Raises Safety, Expense Issues American teenager Abby Sunderland hoped to sail solo around the world, but became stranded in the Indian Ocean. Her rescue is renewing an ongoing debate: When adventurers get in trouble, who rescues them, and who pays the cost? 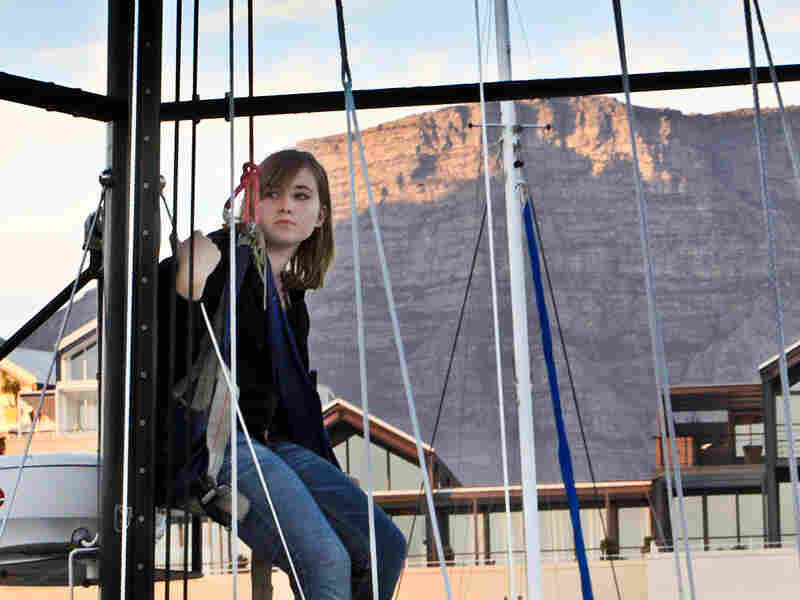 Abby Sunderland on her yacht, Wild Eyes, at the V&A Waterfront in Cape Town, South Africa, on May 21. Jaco Marais/Getty Images hide caption 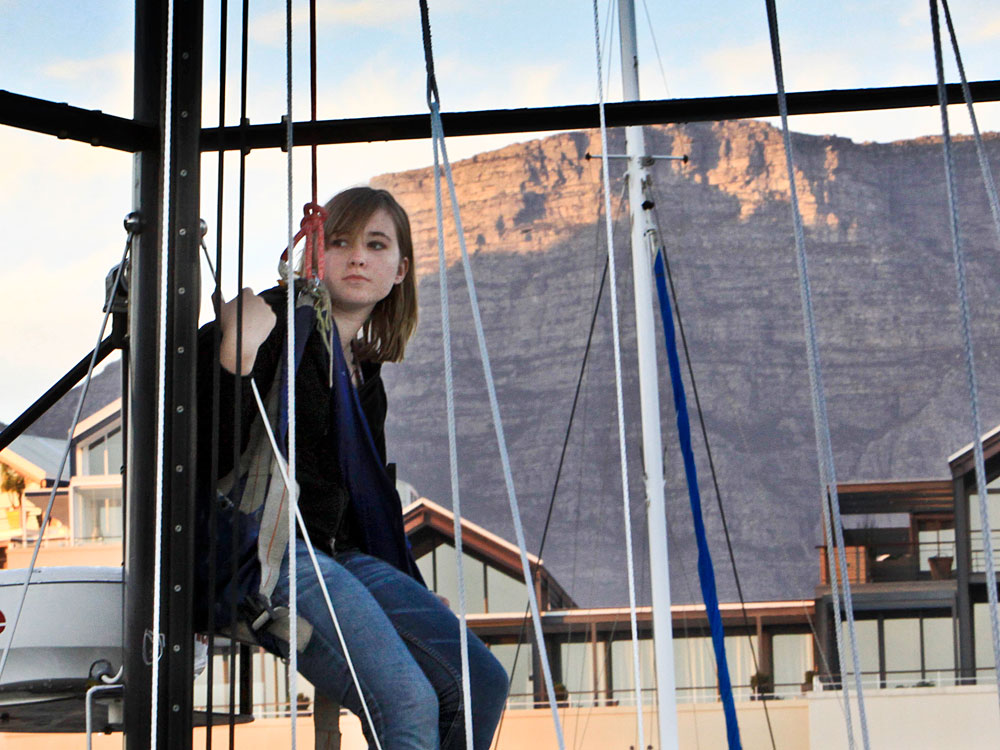 Abby Sunderland on her yacht, Wild Eyes, at the V&A Waterfront in Cape Town, South Africa, on May 21.

The rescue of Abby Sunderland, the teen sailor stranded in the Indian Ocean, could reignite a debate not only about the advisability of minors attempting record-breaking feats, but of the cost of difficult and dangerous search and rescue operations for individuals who knowingly embark on high-risk adventures.

A French fishing vessel, coordinated by an Australian search and rescue command, was steaming toward Sunderland's disabled sailboat Friday. Her position is approximately 1,500 nautical miles southeast of Reunion Island in a remote region that sailors have dubbed the "Roaring 40s" for the extreme weather that is commonplace in those latitudes.

Sunderland had set off from Marina del Rey, Calif., in January hoping to sail into the history books as the youngest nonstop solo circumnavigator. A faulty autopilot control caused her to put into Cape Town, South Africa, last month, forcing a forfeit of the nonstop part of the record attempt. She elected to go on anyway.

Once the fishing vessel arrives on the scene of Sunderland's sailboat, a rescue will be anything but simple, says Dr. Gino Bottino, chairman of U.S. Sailing's Safety at Sea committee.

"That will be a dangerous event," he said. "There's nothing easy about a rescue at sea."

Transferring a person from one vessel to another or to a helicopter, he said, can be dangerous, but the particular circumstances for Sunderland — in heavy swells and with a rescuing vessel not designed for such operations — could prove especially difficult.

"Fishing vessels are obviously not set up for rescues," Bottino said.

Geoffrey Pagels, a search and rescue specialist for the U.S. Coast Guard's Rescue Coordination Center in Norfolk, Va., agrees that a fishing vessel, which is typically round-bottomed, tends to wallow as it loiters on station, which is not ideal for getting a person off a stricken vessel. But "if the master is a fisherman, he is likely an extremely experienced mariner" even if he isn't a search and rescue professional, he said.

Pagels said it's vital that the search and rescue mission coordinator in Canberra, Australia, be absolutely clear about how the rescue should take place to avoid confusion.

"We have had instances with commercial vessels performing rescues where people are so desperate to get rescued that they simply jump off the boat," he said.

There are only a few ways Sunderland could be transferred. She could be transferred in a life raft, taken directly over the side of the rescuing vessel, passed a rescue line and dragged across or simply jump off her boat and be plucked from the frigid waters.

Of those options, the first is regarded as the best-case scenario, Pagels said.

Being pulled directly over the side of the rescuing vessel can be extremely dangerous in rough seas, as boats and people can be crushed in the process and "going into the water is absolutely the last resort," he said.

The cost of search and rescue operations in remote waters has triggered periodic debate in countries such as Australia, which along with New Zealand and Chile among others, are bound by international maritime law to perform rescues in the southern latitudes.

The Vendee Globe, a single-handed race in which some of the world's best sailors shoot around Antarctica, has had its share of rescues — some successful, some not.

In 2008, the Australian Navy frigate HMAS Arunta rescued two Vendee Globe competitors — French yachtsman Yann Elies, who was severely injured, and Britain's Mike Golding, whose boat lost its mast. The Australian media put the cost of picking them from the Southern Ocean at $1 million.

Search and rescue missions are expensive, Pagels said. It costs about $12,000 an hour to operate a C-130 rescue craft and as much as $8,000 an hour to run a Sikorsky helicopter.

In Sunderland's case, the first visual contact was made by a diverted Qantas A330 jet airliner, a case Pagels said "I have never seen in all my years in this business." According to a statement from the airline, Qantas "was approached to make the aircraft available." An airline spokesperson declined to say how much the 13-hour flight cost or who would pick up the tab.

The Australian maritime authority also would not put a price tag on Sunderland's SAR mission but said it would not be seeking compensation for the search, which initially fell just outside the country's jurisdiction. "That's the way the system runs," said Mick Kinley, the acting chief of the Australian Maritime Safety Authority. "It's our obligation to do this and we'll fulfill those obligations as Australia does."

Among yachtsmen, a mystique and machismo are often associated with single-handed sailing. But there is considerable disagreement as well.

"I've never been a big fan," said Gary Jobson, the president of U.S. Sailing and a veteran of multiple offshore races, including an America's Cup win in 1977. "Simply put, it's dangerous to be crossing oceans by yourself. There's fatigue and the inability to stand a proper watch that are concerns."

Chris Larson, who has won numerous sailing titles and competed in the Volvo Ocean race, the fully crewed version of the Vendee Globe, is more direct about solo circumnavigators: "They're crazy," he said, laughing. "The people who do the single-handed sailing are definitely a different breed of person. They are faced with incredible challenges. You can never predict what you have to go through."

Jobson said it might be time to require rescue insurance for sailors who put themselves in unnecessarily dangerous situations, such as solo circumnavigations. "There needs to be some recourse to make people think about doing this sort of thing," he said. "It makes you think should we have an expensive insurance policy to cover this sort of thing."