Accessibility links
Fresh Air Interview: Journalist Maziar Bahari - 'A Journalist Remember Iran A Year Later' Newsweek correspondent Maziar Bahari was arrested in Tehran a year ago while covering Iran's election protests. He explains how he endured 118 days in Iran's notorious Evin Prison, where he was repeatedly interrogated and tortured — and how he now views his homeland. 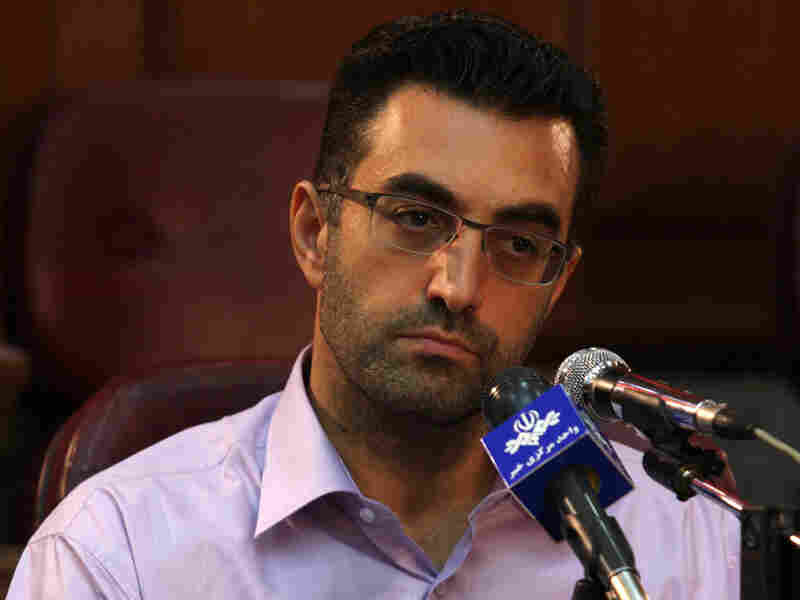 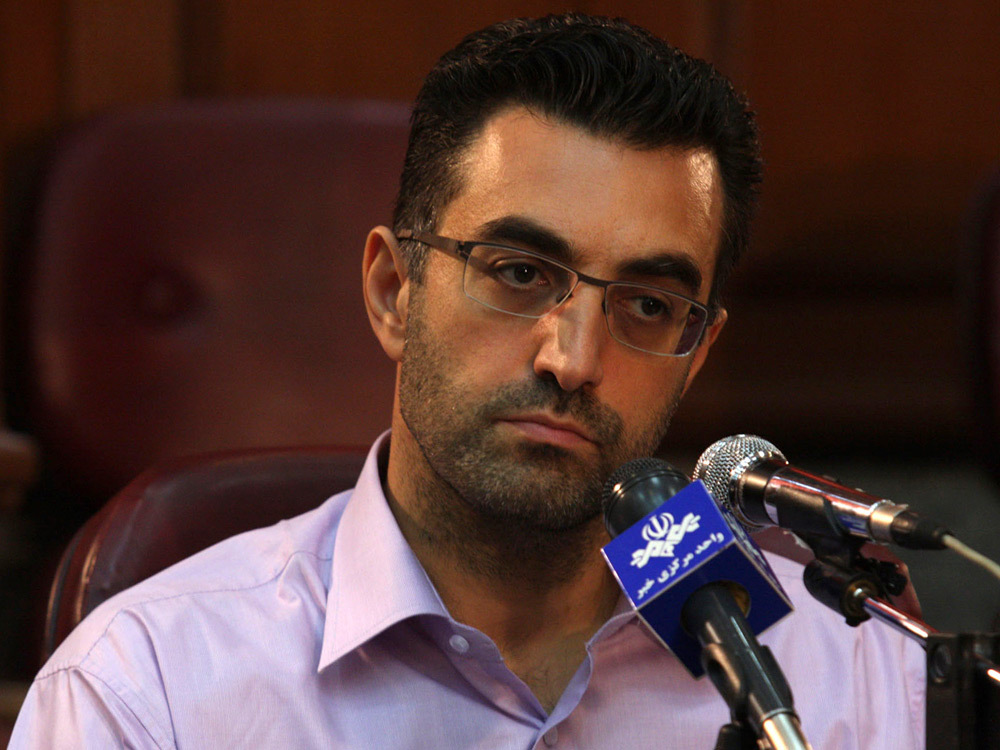 Maziar Bahari, shown in a photo released in August by the semi-official Iranian Fars News Agency.

The Stupidity of Evil
The Last Ayatollah
118 Days, 12 Hours, 54 Minutes

On June 21, 2009, Newsweek correspondent Maziar Bahari was arrested by Iranian intelligence officers in the aftermath of the election demonstrations that swept across Tehran.

For 118 days, he was held in Iran's notorious Evin Prison. His Iranian interrogators accused Bahari, who had covered Iran for Newsweek for more than a decade, of being a spy for the CIA, Israel's Mossad and Britain's MI6.

Bahari, who was never told why he was arrested, was interrogated and tortured repeatedly during his incarceration. He was questioned about his associations with other journalists. After Secretary of State Hillary Clinton pushed for his release, Bahari was freed on Oct. 17 and was present in London a week later when his wife gave birth to their first child.

A year after his arrest, Bahari reflects on the Iranian election demonstrations that took place one year ago this week. He tells Fresh Air's Terry Gross that, among other things, thinking about the singer Leonard Cohen helped him endure his daily torture sessions.

"He basically provided the soundtrack to my imprisonment in my mind," he says. "It was just amazing to me that this very cynical, Jewish-Canadian singer-songwriter can help me in the middle of this dictatorship in a prison in Iran. And that was really liberating. Because that was a secret between me and Leonard Cohen that my interrogator and my prison guard, they did not know anything about."

On the one year anniversary of the election protests in Iran:

"Simply, I have to think about the anniversary of my arrest in Iran as well, because, as much as I was proud to be Iranian on the 15th of June, 2009, I got worried about the future of the country on the 19th of June, 2009, when the Supreme Leader of Iran, Ayatollah Ali Khamenei, who people thought he was a pragmatic leader — and a pragmatic leader who was thinking about his own survival — would accept the voice of the people and wanted a recount of the votes. But Khamenei did not do that. Khamenei told the people to go back home or they have to pay the price of the violence and the consequences of their action. And on the 19th, when Khamenei delivered that ceremony and the Friday prayers, Iran entered the new phase and Iran became a quasi-military dictatorship, like any other military dictatorships in the Middle East, from a theocracy. And one year later, we can talk about the Islamic Republic of Iran as an Islamic government, as a theocracy. We can talk about it as a quasi-military dictatorship."

On being sentenced in absentia in Iran after his release from prison:

"They released me on bail. Before I was released, they asked me to sign a paper saying when I leave Iran, I'm going to cooperate with the government and I'm going to spy for the government. The first thing I did when I arrived in London was to send them an e-mail, through the e-mail address they provided for me, that I have never spied for anyone and I'm not going to start spying for you. And that really bothered them. And not immediately, but within a month I started talking about my experience and the psychological and physical torture I had been through — and also, I started a campaign with the Committee to Protect Journalists and many other organizations in support of other journalists who are imprisoned in Iran. As you know, more than 100 journalists have been detained since the re-election of Mahmoud Ahmadinejad in June 2009, and many hundreds are in exile. ... So they kept on threatening me through my family members and sometimes they even called me in London, and I just had it. In March, I just made those threats public, and I told all the different networks that the Iranian government is threatening me. And there was an international condemnation of those threats, and within a few days, they passed this sentence. The sentence was supposed to scare me because the Iranian government was planning to start this international court for Iranians in the diaspora. And also, the sentence was supposed to scare many other journalists and filmmakers who were working in Iran — that if you do something on the anniversary of the election, that this kind of sentence can happen to you."

On anti-Semitism in the Iranian government:

"I'm a member of two fan pages on Facebook, and one of the pages is Anton Chekhov. And one of the pages is Pauly Shore, but let's not talk about that one. So I'm a fan of Anton Chekhov, and one day my interrogator asked me, 'Who is Anton Chekhov?' I said, 'Well, he is a Russian playwright from the late 19th century, early 20th century.' [He asked] 'What does he write about?' [I said] 'About existential subjects, about people's day-to-day problems. He's a very good writer.' And he said, 'Was he a Jew?' I said 'Well, I'm not sure whether Chekhov was a Jew or not, but there were many Jewish intellectuals at that time. Maybe he was. Maybe he was not. I'm not really sure whether Chekhov was.' And he said, 'No, no, I'm sure that Chekhov was a Zionist. We have to investigate.' And so they went and investigated Anton Chekhov during my interrogation, and they were accusing me of supporting the Zionists because I was a member of an Anton Chekhov fan club on Facebook."

On how a video from The Daily Show was used during his interrogation:

"On the first day when they arrested me, they told me that they knew I was working for four different intelligence agencies: the CIA, Mossad, MI6 and Newsweek. When I asked them what was their evidence, they said, 'We don't have to give you any evidence. We're going to give it to the courts.' So my guess ... is that, in the absence of any evidence to prove that I was a spy, they were just desperate to find any evidence to prove I was a spy. And I'm sure that someone in the U.S. who filmed The Daily Show — that sketch with Jason Jones and me — and sent it to them and said that this is this guy, who said that Iran and America, they have a lot in common. And he's talking to a spy. And I have to also mention that also a couple of days before that, I met with Jason Jones and his producer in a hotel where I was editing a documentary, and I gave them a list of people they could talk with — and I was being followed by the Revolutionary Guards at that time. So I think they put all of this different, circumstantial evidence together, and they said, 'Well, if Jason Jones looks like a spy, if this guy gives different names to people, then he must be a spy.' It was so emblematic of this paranoid thinking that they had that it didn't even allow them to listen to the laugh track on The Daily Show. So they said, 'Well, why did you talk to this spy? If he says that he's a spy, if he looks like a spy, then he must be a spy.' And they were really upset that I said, 'Iran and the United States had a lot in common.' "

On not being able to return to Iran:

"It makes me really sad, and it makes me really sad for my daughter. [My wife] Paola and I were planning to go to Iran next year and so Paola could see it. Paola's never been to Iran, either. And I really wanted my daughter to be able to go to Iran to visit her family in Iran, but it's not possible. But it's something that I have to deal with. I always tell people it's like being in an accident and some drunk driver has made me handicapped. And I have to live with my handicap. So not being able to go back to Iran is like that for me."