Accessibility links
The Latest Kids' Craze: Rubber Bands Well, not quite. Silly Bandz are stretchy, colorful silicone bands that come in all different shapes. And kids around the country just have to have them. But why are they so popular? 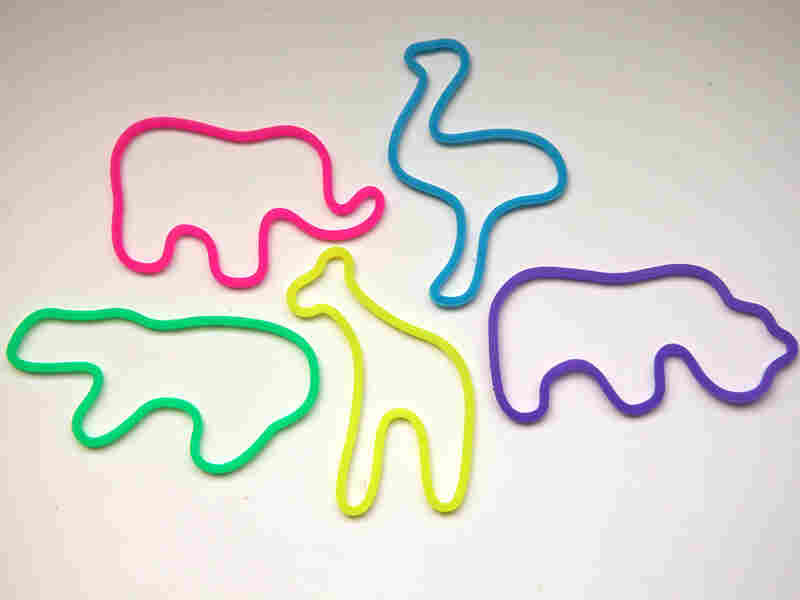 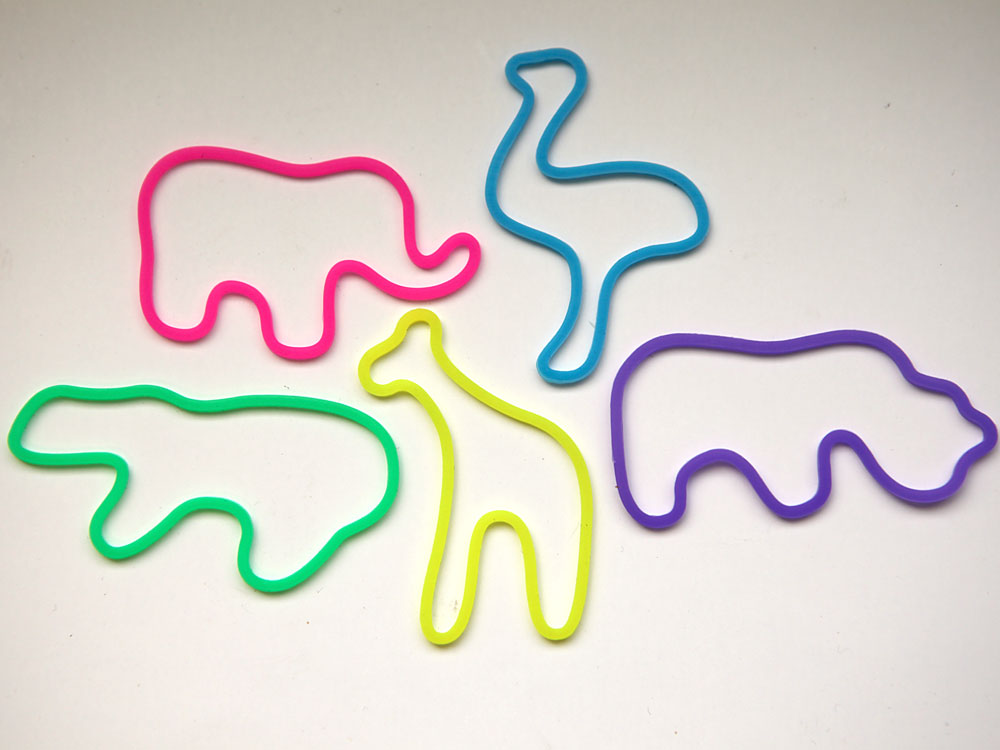 Kids are going crazy over these stretchy, colorful bands.

They're silicone bands that come in all different colors and shapes -- cats, princesses, shields. Kids wear them around their wrists and trade them, and they're so popular they've been banned in classrooms around the country because they're too distracting.

At Lafayette Elementary in Washington, D.C., a group of kids, mostly third- and fourth-graders, are sitting in a circle with some bands scattered on the blacktop between them.

The vibe in their circle is a bit like the trading floor of the New York Stock Exchange. One kid will take a band off her wrist, hold it up, and see what she can get for it.

Third-grader Grace Neville is wearing bands halfway up to her elbows, pinks and oranges on one wrist, greens on the other. She says the trend came to her school a week or two ago. One girl wore them to school, and the rest reads like fad history.

"Tons of people were like, 'Oh my gosh, I have to buy them, where do you get them?' " Neville says.

Many different suppliers sell virtually identical bands, all with different brand names, but most kids call them all "Silly Bandz." A Toledo, Ohio, company called BCP Imports has a trademark on that name. A spokesperson for the company says the number of employees at the main office shot from about 20 a year ago to almost 70 today. In the past month alone, 20 phone lines have been added to take all the orders.

But what makes a simple toy so popular? 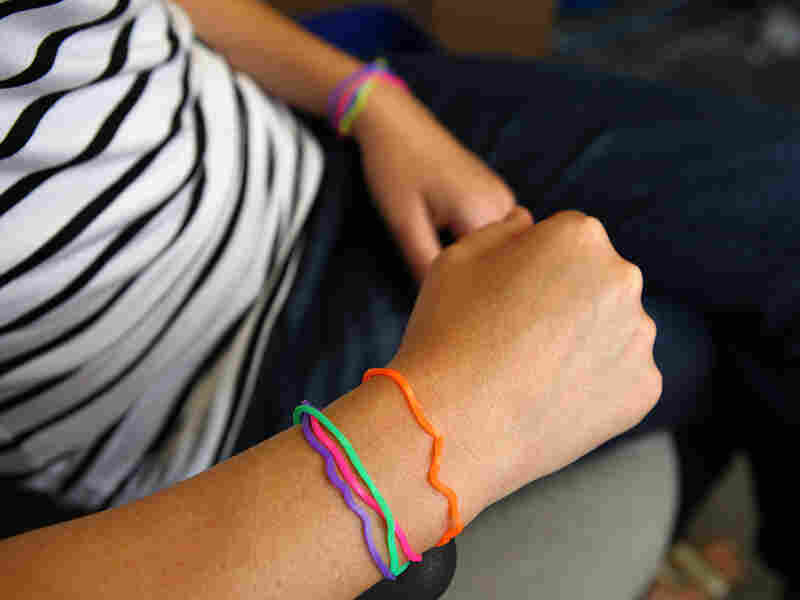 The trend has been spreading around the country since last year, as demonstrated by this NPR staff model. Claire O'Neill/NPR hide caption 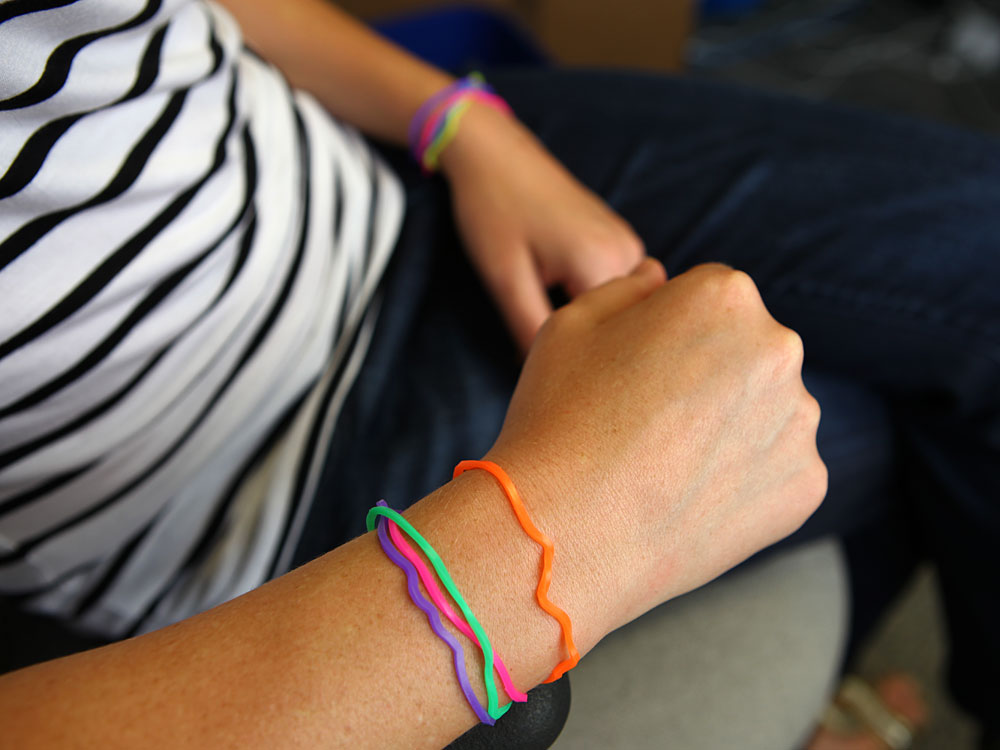 The trend has been spreading around the country since last year, as demonstrated by this NPR staff model.

Rohit Bhargava, a marketing executive at Ogilvy, a public relations firm, says the craze provides an interesting case study in what would make the perfect fad.

First, it must be portable. If a toy just sits in the den, other kids will never see it.

"Part of the important thing about this trend is that it was something you could wear to school," Bhargava says. "Some kids started doing it and you saw it and you wanted to be part of it."

Second, he says, you have to have an incentive to keep buying them. Like with baseball cards, kids buy multiple packages of the bands to get different colors and shapes. At around $5 for a 24-pack, they're a relatively cheap collectible.

Third, it helps if part of the fun is in trading them. That keeps a trend fresh and exciting.

Finally, Bhargava says a good fad makes you feel like you're part of something.

"It seems weird to connect Silly Bandz with a community," Bhargava says, "but it's such a visible thing that all these kids are wearing on their arms and can see one another wearing that it really does give you a sense of belonging to something."

Fifth-grader Sarah Burch isn't too impressed with her school's latest trend. She says you just can't do much with the bands.

"You just kind of trade them, they look cool, but there's not really a point to them," Burch says.

Still, she did just buy a few packages to hand out as favors at her birthday party.

It isn't rational, but it's just what you do when you're a kid.