Accessibility links
'Artichoke Tales': Smart. Nuanced. Deeply Imagined. And Cute As All Get-Out. 'Artichoke Tales': A smart, nuanced, deeply imagined graphic novel that just so happens to be cute as all get-out.

News (Not Compatible With) Flash: As reported by the site iFanboy late, late last night, the answer to the question, “When will DC Comics finally start publishing their comics digitally?” is: Late, late last night. A DC Comics app has appeared without fanfare in Apple’s app store, joining those of Marvel Comics and BOOM! Studios; all three use the same Comixology tech and design.

We’ll have much more on these developments next week, including the differing approaches comics publishers are taking to same-day distribution.  For now though, let’s … take a look at a book with pages, binding, the whole old-paradigm schmear. 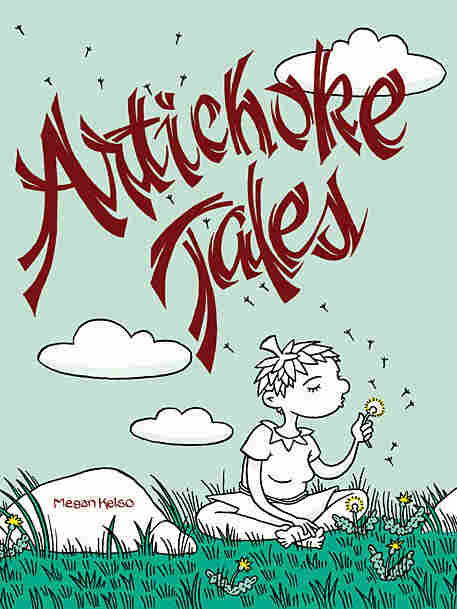 With the cartoony young girl blowing the dandelion seeds?  And that whole artichoke-leaves for hair thing?  You take one look and think, “Aw, a comic for kids! About life in a little village of artichoke-people!  So, kind of like the Smurfs, then, only green and more, uh … fibrous.”

If you are me, you may also concoct a scenario in which the artichoke people, instead of defending their way of life from a Smurf-hating evil wizard, square off against a giant, sentient tub of lemon-butter dipping sauce.  Named, say, Grenobloise.

But you are thankfully not me, and even if you were, you’d still be wrong on all counts.

Artichoke Tales is cartoonist Megan Kelso’s first graphic novel. Like Squirrel Mother, her 2006 collection of short-form comics, the book marries an open, childlike art style that invites the eye to a narrative marked by a sophisticated and decidedly adult tone. Not “adult” in the sex-and-violence sense (though there is some of both, here), but in its flinty, steely-eyed commitment to exploring the world Kelso’s created with subtlety -- and without sentimentality.

The story she’s telling is a multigenerational epic that hops around in time and place to document how war has riven a once-united, though never exactly harmonious, land.  Open conflict has ended between the industrious people of the North, who are skilled in metalwork and fishery, and the people of the more agrarian South.  But resentment and distrust remain, both of which confront Brigitte, the Southern girl who falls for a Northern soldier.

By the time Artichoke Tales reaches its bittersweet (more bitter than sweet) ending, the reader will come to see how Brigitte’s entire family has been shaped by the war, as well as the folklore that surrounds it.  Kelso asserts all of this with skillful restraint, inviting us to infer many of the connections between her characters and events.

She lets her cartooning delineate the characters’ often oblique and unspoken conflicts -- you’ll want to pay attention to how they hold their bodies and what they do with their hands as they talk -- and for the most part it’s up to the task.  Given the resolutely simple and unfussy way Kelso draws, that’s kind of remarkable: Her characters’ faces, after all, look very much alike, and abrupt shifts in time and locale occur often, making Artichoke Tales a book that rewards (okay, demands) a close, sustained reading.

But that reward is considerable, because just underneath Artichoke Tales’ sunny, cartoony surface style lies an immersive take on the lingering costs of war, a subject that too rarely comes in for this kind of nuanced, thoughtful treatment.